Apple pollination occurs when pollen is transferred, often by an insect vector, from the anthers of one blossom to the stigma of another. After pollen grains are deposited, they are rehydrated by stigmatic secretions, and pollen tube growth begins (Dennis, 2000; Jackson, 2003). Genetically compatible pollen tubes grow through the stigma and style and toward the ovaries. At the end of the style, the pollen tube enters the ovary through the micropyle, where two sperm cells are released into the ovule. Fertilization occurs when one nucleus fuses with the egg cell, and the second nucleus fuses with the embryo sac, initiating seed formation (Dennis, 2000). Investigations into apple pollen biology have been underway for over a century (Adams, 1916) and have recently been reviewed by Ramírez and Davenport (2013).

In commercial apple orchards, cross-pollination between two distinct genotypes results in greater fertilization rates and thus a greater fruit set, even in orchards containing self-fertile cultivars (Dennis, 2003). Various Malus species, colloquially referred to as crabapples, are preferred pollinizers in commercial orchards due to their long bloom periods, disease resistance, and abundant pollen production (Fitzgerald, 2005). In particular, the crabapple Malus baccata ‘Manchurian’ has been widely planted in commercial orchards as a pollinizer. However, it has fallen into disfavor in recent years due to its high susceptibility to canker diseases, which could limit apple exports into Asian markets (Hansen, 2014). Other popular crabapple pollinizers include ‘Snowdrift’, ‘Thunderchild’, ‘Indian Summer’, ‘Mt. Blanc’, ‘Wickson Crab’, and ‘Chestnut Crab’.

The objectives of this study were to determine how pollen tube growth rates were affected by paternal (pollen source) and maternal cultivars, temperatures after pollination, and the interaction among these factors. We did this by comparing the pollen tube growth rates of five crabapple cultivars on three maternal culinary apple cultivars at four temperatures.

Experiments were conducted at Virginia Tech’s Alson H. Smith Jr. Agricultural Research and Extension Center (AREC) in Winchester, VA. In 2013 and 2014, pollen was collected from mature ‘Evereste’, ‘Indian Summer’, ‘Selkirk’, ‘Snowdrift’, and ‘Thunderchild’ trees located at the AREC. Only healthy blossoms in the late pink flower stage (when petals still covered the sexual organs and before dehiscence of anthers) were used (Chapman and Catlin, 1976). Pollen was collected by removing anthers from the blossoms using a fine-toothed comb, allowing them to air-dry, and then pressing the anthers through a 200-mesh sieve (74 μm between wires). Pollen was stored in microcentrifuge tubes at −12 °C until use. Pollen collected in 2013 and 2014 was combined for each crabapple cultivar. Pollen viability was scored in two samples for each crabapple cultivar after 24 h at 21 °C on an agarose (10 g·L−1), sucrose (100 g·L−1), and boric acid (10 mg·L−1) medium by calculating the percent germination (Williams and Maier, 1977).

Mature ‘Autumn Rose Fuji’/‘M.9’, ‘Golden Delicious’/‘M.27’, and ‘Cripps Pink’/‘M.9’ trees grown in 19-L root bags (Lacebark, Stillwater, OK) were the maternal cultivars selected for this study. Whole trees (including the bagged root system) were removed from the orchard in Jan. 2015, placed in 19-L buckets, and kept in cold storage to accumulate sufficient winter chill hours to complete endodormancy. ‘Cripps Pink’ and ‘Fuji’ trees were kept at 4.4 °C for 400 h, and ‘Golden Delicious’ trees were kept at 4.4 °C for 700 h; after the chilling hours had been met, trees were moved into a greenhouse (mean temperature 24 °C) to force bloom.

Maternal flowers used in the experiment were selected during the late pink flower stage. During each temperature trial, pollen from the five paternal cultivars was hand-pollinated onto 35 flowers from each maternal cultivar; seven unique pollinated flowers for each paternal cultivar treatment. An additional seven emasculated, nonpollinated flowers were left on the tree to serve as nonpollinated controls. All side blooms and extra flower clusters were removed from the tree to prevent cross-contamination. Flowers were tagged to identify the pollen source, and a sterilized, size 6 artist’s brush was used to apply pollen directly to the stigma. Pollen was applied in a uniform way until pollen grains were visible on the stigma. Immediately after pollination, trees were placed into a temperature-controlled growth chamber (Intellus Control System; Percival Scientific, Perry, IA) for 24 h under a 12-h photoperiod. For each maternal cultivar, the experiment was repeated at four ambient air temperatures: 12, 18, 24, and 30 °C for the duration of the experiment. After 24 h in the growth chamber, flowers were removed from the tree in the order they were pollinated and placed into glass vials filled with a 5% aqueous sodium sulfite (Amresco, Solon, OH) solution.

Storage vials containing the flowers were placed in boiling water for 20 min to soften the tissue. The pistillate portions were then excised from each flower and rinsed with distilled water. The styles were individually detached from the ovary using forceps and scalpel. The styles were stained with a water-soluble fluorescent solution containing 0.01% aniline blue dye (MP Biomedicals, Solon, OH) in 0.067 m K2HPO4 for pollen tube visualization, then pressed between two microscope slides (Embree and Foster, 1999). Slides were viewed at 10× and 40× with a light microscope (Eclipse Ci; Nikon, Tokyo, Japan) and fluorescent light source (Intensilight C-HGFI; Nikon). Histological examination for each individual style was conducted as described in Yoder et al. (2009) and Yoder et al. (2013), and included pollen germination/tube growth on the stigmatic surface (0% to 100% of visible stigmatic surface covered with pollen), number of pollen tubes penetrating the base of the stigma, length of the longest pollen tube, style length, and the number of pollen tubes that grew to the base of the style.

Differences in the percent of styles with paternal pollen tubes reaching the base were analyzed using the GLIMMIX procedure of SAS (SAS Institute). The fixed effects included in the model were temperature (24 and 30 °C), maternal cultivar (Cripps Pink, Fuji, and Golden Delicious), and paternal cultivar (Evereste, Indian Summer, Selkirk, Snowdrift, and Thunderchild). Interaction terms were not used in the model because they were not significant.

Pollen collected from ‘Thunderchild’, ‘Selkirk’, and ‘Indian Summer’ had germination rates of 90%, 85%, and 75%, respectively, and pollen collected from ‘Snowdrift’ and ‘Evereste’ each had a 65% germination rate (Table 1). We used fluorescent microscopy to visualize pollen tubes as bright blue colored structures within the red to purple colored pistillate tissue (Fig. 1). Pubescence at the base of the style also fluoresces, but is different in structure and easily differentiated from the pollen tubes.

Pollen tubes were found in the styles of nonpollinated control flowers during the 18, 24, and 30 °C trial, but not the 12 °C (Table 2). The pollen tubes found in control blossom styles were significantly shorter than those found growing in hand-pollinated treatment styles regardless of maternal cultivar or temperature (P < 0.0001). Due to this highly significant difference, the pollen tube growth of the five paternal cultivars was analyzed without further comparison with control blossoms. The average style lengths for ‘Cripps Pink’, ‘Golden Delicious’, and ‘Fuji’ were 9.2, 10.1, and 9.7 mm, respectively.

Mean pollen tube growth length and standard errors of paternal crabapple cultivars after 24 h in a growth chamber, in maternal cultivar styles, at four temperatures, 12, 18, 24, and 30 °C. The mean pollen tube growth length is represented in each table, but arranged so differences in (A) paternal cultivars, Evereste, Indian Summer, Selkirk, Snowdrift, and Thunderchild; (B) maternal cultivars, Cripps Pink, Fuji , and Golden Delicious; and (C) temperatures can be separately evaluated. Cultivars or temperatures not connected linearly by the black boxes in the same column are significantly different. Statistical analysis completed by PROC MIXED. Means represent 35 observations and are significant at P ≤ 0.05.

The percentage of apple styles with paternal cultivars Evereste, Indian Summer, Selkirk, Snowdrift, and Thunderchild pollen tubes growing to the base, and the percent of maternal cultivars, Cripps Pink, Fuji, and Golden Delicious, styles with pollen tubes growing to the base. Data are means from the 24 and 30 °C temperature evaluations. Mean separation within column by PROC GLIMMIX.

On average, pollen tube length in the control blossoms did not exceed one-third of the average style length, indicating pollen tubes found in styles likely resulted from self-pollination. Self-pollinated flowers of self-sterile apple cultivars will initiate pollen tube growth, but the tubes are often halted in the top third of the style by proteins formed when the S-alleles of the style and those of the pollen tubes are recognized as equal (Stösser et al., 1996). Self-pollination may have occurred when the flower petals still enclosed the sexual organs or during anther removal. Similar results were also found by Yoder et al. (2009) when ‘Golden Delicious’ pollen tube growth was initiated in the style of ‘Golden Delicious’ flowers, but never grew past one-third of the style length.

The increased growth of ‘Selkirk’ and ‘Thunderchild’ pollen tubes at colder temperatures may be related to the earlier flowering and shorter phenology of these cultivars. At the AREC in Spring 2015, ‘Selkirk’ and ‘Thunderchild’ were the first of the five crabapple cultivars to bloom and the time between the first bloom and petal fall was only 7 d (Table 1). Flowering time may be related to pollen tube growth rates among Malus species, but more data are needed to support that conclusion.

In addition, ‘Evereste’ and ‘Snowdrift’ were the only two cultivars evaluated with white flowers (Table 1). These two cultivars had the lowest germination rates, the lowest percent of pollen tubes reaching the base of the style, and most often the shortest pollen tube length. Flower color has been reported to affect pollen tube growth rate of Mirabilis jalapa, where pollen tubes of red- and magenta-flowered genotypes grew further than those of yellow- and pink-flowered genotypes (Berardi et al., 2013). The evolutionary relationship between petal color and pollen tube growth rate is unclear, and a much larger study would be required to establish a causal relationship in apple.

The presence of multiple donor genotypes has been shown to increase fecundity in apple (Kron and Husband, 2006). It is possible that some of the crabapple genotypes in our experiment use more than one strategy to outcompete other genotypes and achieve fertilization, meaning that pollen tube growth rates may only be one of many factors involved in understanding our results. Future studies should compare the pollen tube growth rates of single vs. multiple pollen sources.

‘Thunderchild’ pollen tube growth in a ‘Fuji’ apple 24 h after pollination at a constant temperature of 24 °C, visualized with water-soluble fluorescent solution containing 0.01% aniline blue dye in 0.067 m K2HPO4 and magnified 10× using a light microscope and a fluorescent light source. 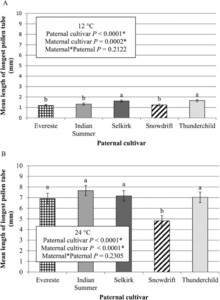