As the structure of angiosperm pollen is weakly affected by the environment (Salmaki et al., 2008; Walker, 1974) the structure of herbaceous peony pollen is thus likely be more stable, and can reflect common characteristics of a genus or family and define plant origin and evolutionary relationships (Zhang et al., 2014). Wang (2006) indicated, in studies of tree peony (Paeonia decomposita Hand.-Mazz.) and herbaceous peony (Paeonia intermedia C.A. Mey.), that pollen sterility is directly related to its size. In the genus Rosa L., Ma and Chen (1991) confirmed the genetic relationship between hybrid offspring and their parents by comparing pollen exine ornamentation.

Three methods are most frequently used to study pollen morphology: LM, SEM, and transmission electron microscopy (TEM). TEM is often used to observe the ultrastructure to explore the structure and composition of the pollen wall. For example, Tellería et al. (2013) and Xu and Ronse de Craene (2013) used TEM to study the ultrastructure of the pollen wall in Compositae and Annonaceae, respectively. A limitation of LM observations is the level of detail in pollen grain surface sculpture that is discernable. The detail that is available from SEM is often required for taxonomic studies (Kodela, 2006). In this study, the pollen morphology, including shape, size, and surface sculpture, of 26 herbaceous peony cultivars with different ploidy levels were examined to provide a useful palynological basis for studying kinship and taxonomy among peonies and to advance hybrid peony breeding.

Fresh pollen grains of the 26 cultivars cultivated at the experimental farm of the Beijing Forestry University were collected from mature stamens in Apr. and May 2013 (Table 1). Most of the cultivars introduced from United States were cultivated in Beijing for more than 3 years. Fresh pollen grains were dried naturally or in silica gel. Dry pollen was used for SEM observations. 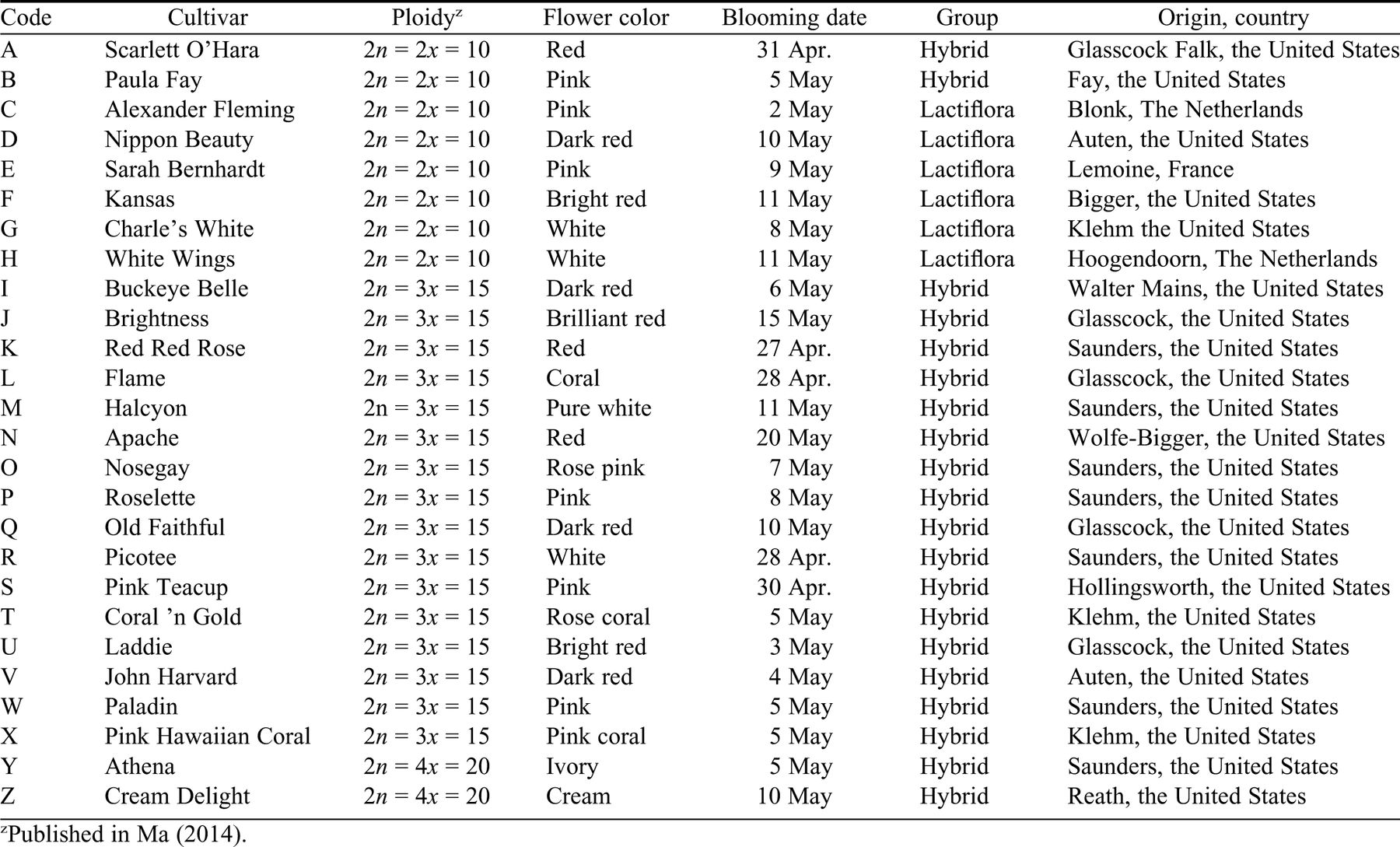 Methods of measurement and analysis.

Twenty pollen grains of each cultivar were measured by the software Autocad 2010 (Autodesk, San Rafael, CA). Measurements included P, E, P/E, D, W, and D/W. Experimental data were analyzed with SPSS (version 18.0; IBM, Armonk, NY), and the Duncan’s multiple range test (P < 0.05) was used for mean separation. In addition, the partial correlation I between these six indexes was analyzed.

The P × E value represents the size of pollen grains, whereas P/E represents pollen shape. If P/E > 2, it is perprolate, and if 1.14 < P/E < 2, it is subprolate (Wang and Wang, 1983). Pollen characteristics were observed in equatorial view as well as in polar view, including pollen shape, the type of perforations and exine ornamentation, which were all based on SEM images. Descriptive palynological terminology follows that used by Erdtman (1943, 1952, 1969) and Punt et al. (2007). Finally, based on the data of six indices (P, E, P/E, D, W, and D/W), Q cluster analysis within SPSS was used to develop a dendrogram.

The mean and standard deviation (n = 20) of six indices related to the pollen morphology characteristics of 26 herbaceous peony cultivars. 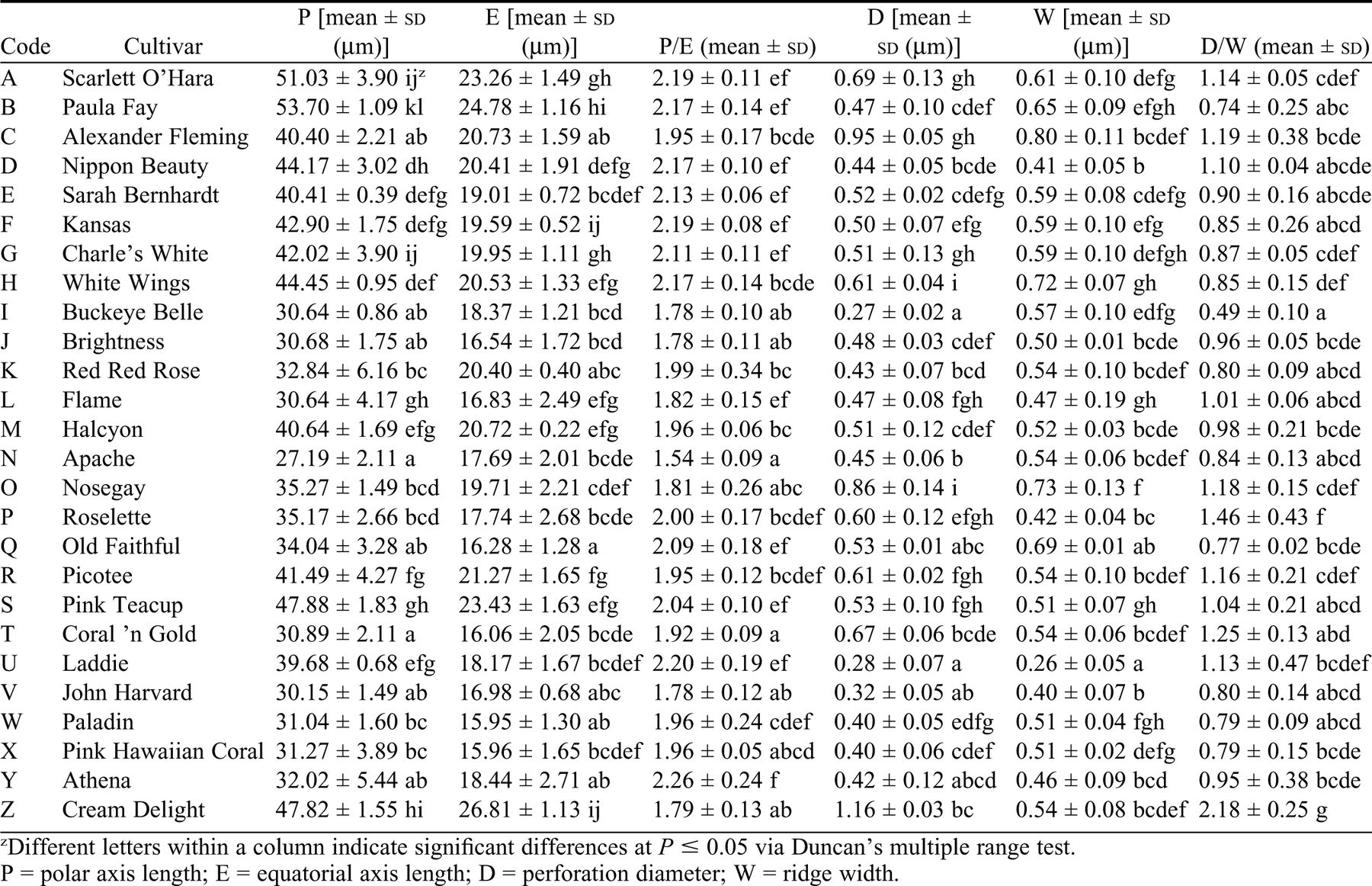 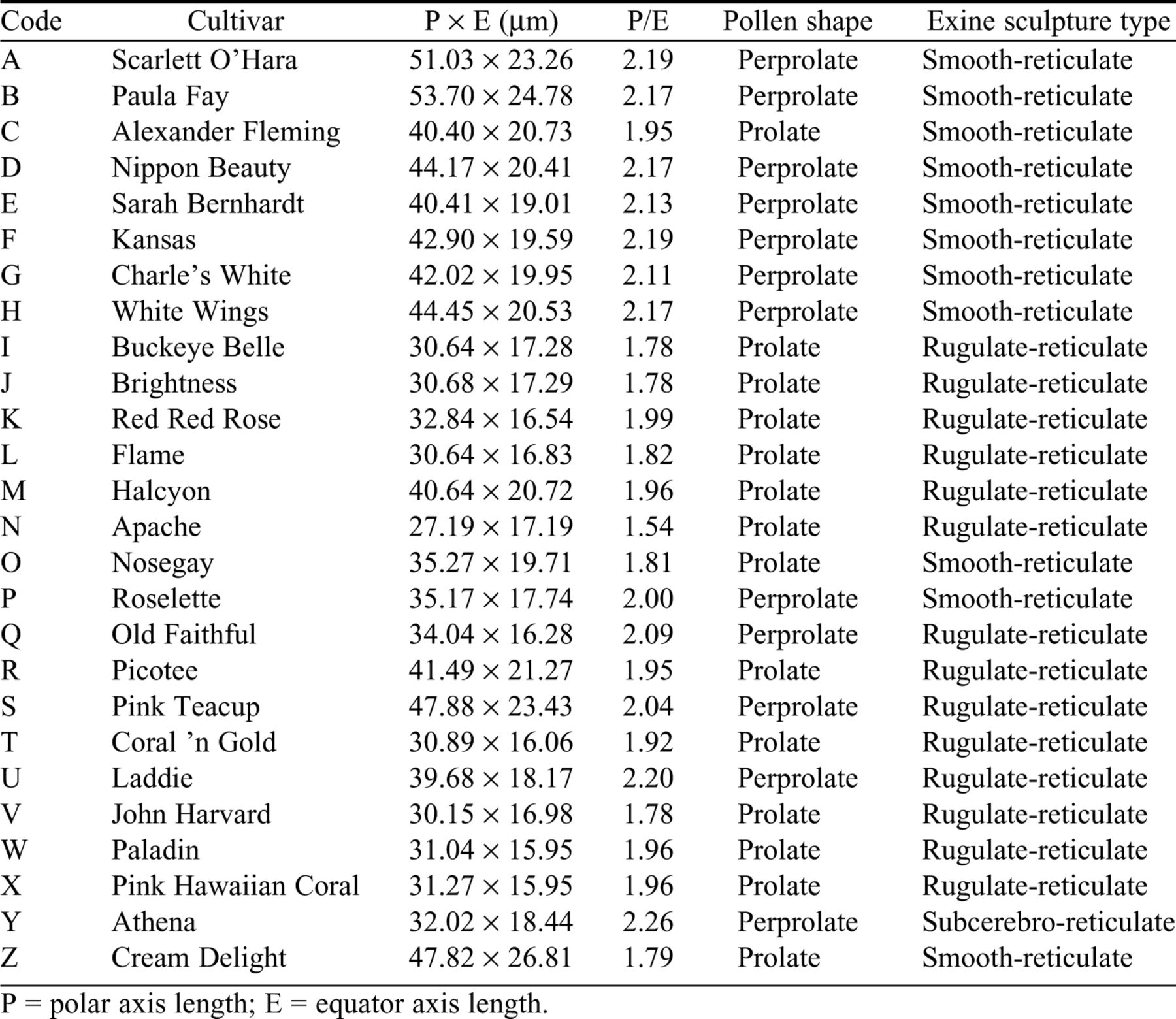 The pollen grains of all 26 peony cultivars were of the tectate-perforate type, but varied in perforation aperture. The reticular type of pollen had sizes ranging from 0.26 to 0.80 μm. ‘Laddie’ (U) had the smallest aperture and ‘Alexander Fleming’ (C) had the largest. D ranged from 0.27 to 1.16 μm and D/W ranged from 0.49 to 2.18. ‘Buckeye Belle’ (I) and ‘Cream Delight’ (Z) respectively displayed the minimum and maximum values of D and D/W. Although the pollen exine sculpture of all cultivars was reticulate, it was divided into three subtypes: smooth-reticulate, rugulate-reticulate, and subcerebro-reticulate (Table 3). The exine of most pollen grains from triploid cultivars showed rugulate-reticulate surface ornamentation, except for Nosegay (O) and Roselette (P), which had a smooth-reticulate exine and were similar to the pollen collected from all diploid cultivars and the tetraploid cultivar Cream Delight (Z) (Fig. 1a–x and z). The other tetraploid cultivar Athena (Y) displayed a subcerebro-reticulate type of exine (Fig. 1y).

Comparison of pollen shape and size in cultivars with different chromosome ploidy.

The size of pollen grains is related to ploidy in the species of potato [Solanum L. (Bamberg and Hanneman, 1991)] and rose [Rosa L. (Jacob and Pierret, 2000)]. Six pollen indices differed among the 26 peony cultivars assessed in this study (Table 2). The morphological characteristics of diploid (A–H) and tetraploid (Y and Z) pollen were different from triploid (I–X) pollen.

The P/E ratio of triploid cultivars ranged from 1.54 to 2.20. Most of the pollen grains were subprolate with empty flat shells, except for ‘Roselette’ (P), ‘Old Faithful’ (Q), ‘Pink Teacup’ (S), and ‘Laddie’ (U), which were perprolate. The polar and equatorial axes were difficult to distinguish in some of the heteromorphic pollen. SEM observations showed that the pollen of triploid cultivars was on average smaller but more variable in size than the pollen of the diploid and tetraploid cultivars (Figs. 1I–X, 2N, 3J, 3M). In addition, some pollen grains were damaged while others stuck together.

The germinal aperture of the full pollen grains of diploid cultivars was tricolporate and was sometimes near the poles. However, the surface ornamentation varied, especially in pollen from cultivars with different ploidy. The D/W ratio of diploid cultivars ranged from 0.74 to 1.19. The reticulation hole was evenly distributed, although the size and shape differed. Some holes displayed rugulate verrucous points while the surface of muri was smooth and continuous (Fig. 1a–h).

The D/W ratio of triploid cultivars ranged from 0.49 to 1.46. Most of the pollen grains were shriveled, the exine was invaginated and the germinal grooves were not obvious. The pollen grains had a rugulate exine sculpture and the muri were prominent. However, the surface ornamentation of ‘Nosegay’ (O) and ‘Old Faithful’ (Q) was similar to that of the diploid cultivars (Fig. 1o and q). The meshes of triploid cultivar pollen grains with irregular shapes and various sizes were unevenly distributed. Their surface ornamentation was highly diverse with many abnormal pollen grains (Fig. 1i–x), which may be because with three sets of chromosomes meiosis is disrupted resulting in many unbalanced gametes.

Six pollen indicators were used in Q cluster analysis to analyze the genetic relationship among the 26 peony cultivars. These cultivars could be divided into three groups with a distance of L = 18.5 (Fig. 4). The index data of Groups I, II, and III are shown in Table 4.

Comparison of the range of six indexes among the three herbaceous peony groups divided by Q cluster analysis.

Group I includes 13 cultivars, nine of which belong to LG except Picotee (I), Halcyon (M), Pink Teacup (S), and Athena (Y), which belong to HG. Eight cultivars were diploid except four HG cultivars and Old Faithful (Q), which are triploid. The pollen morphology of this group was distinguished by a relatively smooth surface and their reticulation holes had a regular shape and homogenous size.

Group II includes 12 triploid cultivars that belong to HG. Among them, ‘Nosegay’ (O) and ‘Roselette’ (P) were in the same cluster, whereas ‘Laddie’ (U) formed a separate group. The other nine cultivars clustered together. Within this group, ‘Red Red Rose’ (K) and ‘Paladin’ (W) were clustered together, and ‘Buckeye Belle’ (I), ‘Brightness’ (J), ‘Flame’ (L), and ‘Pink Hawaiian Coral’ (X) were clustered as a small group. The pollen grains of this latter subgroup had different shapes, the exine sculpture was rough and the reticulate holes were irregular in shape and had various sizes.

Group III had only one tetraploid cultivar, Cream Delight (Z). Its pollen grains were largest among the 26 peony cultivars. The muri were homogeneous and smooth, and the meshes were the largest.

The partial correlation (r value) between D/W and D, W, E, and P was 0.750, 0.333, 0.370, and 0.251, respectively. The P/E index was not correlated with D/W (Table 5). Walker (1974) indicated that the greater the D/W ratio, the higher the degree of evolution. If this theory is also applicable to analyzing the evolution of different ploidy levels, as a result of interspecies hybridization, it follows that Group III with the highest D/W (2.18) is the most evolved cultivar while the Group I cultivars (D/W = 0.93) are the most primitive (Table 4). Further studies on how to estimate evolutionary relationships among the filial generation of cultivars of different ploidies are required.

Correlation between pollen size and structure and ploidy level.

The exine sculpture of all 26 peony cultivars was reticulate based on the Wang (1995) classification. We subdivided this grouping into three types, which were mostly consistent with chromosome ploidy. SEM may serve as an effective and suitable reference method to examine exine sculpture to indicate the ploidy level of herbaceous peony cultivars.

Pollen morphological characteristics are stable and of great taxonomic significance. They can reflect common characteristics of a family or genus and can be used for the identification of taxa (Erdtman, 1966; Qureshi et al., 2002; Stix, 1960). Using electron microscopy, especially SEM, to explore pollen ultrastructure is an important method in species or cultivar identification. Arzani et al. (2005), using pollen surface ornamentation combined with tree features to identify 11 apricot (Prunus armeniaca L.) cultivars in Iran, discovered that pollen surface ornamentation of all cultivars, especially ridge and cavity characteristics, were distinct. Guo et al. (2005) observed that some important indicators of pollen morphology in P. lactiflora were different from those of three other wild herbaceous peonies, P. veitchii, P. obovata, and P. anomala var. intermedia. They also noted that the classification using classical plant morphological characteristics conformed to the classification based on pollen morphology. Li et al. (2011), using stereo microscopy and SEM, observed the flowers and pollen grains of Pogostemon cablin (Blanco) Benth. (Lamiaceae) from three different habitats, and found that pollen micromorphological features were a good taxonomic indicator to the genus level. Kahraman et al. (2013) and Shabestari et al. (2013) found pollen characters to be useful to distinguish species within the genus Vicia L. and Centaurea L., respectively.

In our study, observation of the pollen grains of 26 Paeonia cultivars revealed that the pollen grains varied in size, shape, and exine sculpture among the cultivars, especially those with different ploidies. Nevertheless, the cultivars within the same ploidy varied in their muri and mesh sizes, which provided a reference basis for cultivar identification. Understandably, a single method such as SEM or a single technique such as pollen observation is not sufficient to correctly classify these cultivars. A comprehensive analysis would ideally need to combine various other methods and techniques, such as plant phenotype, molecular markers, cytology, and genetics (e.g., Ji et al., 2012).

Xu et al. (2008) argued that the degree of similarity in pollen grains serves as a preliminary indication of the genetic relationships among cultivars. Wu et al. (2007) used five pollen indices (P, E, P/E, D, and W) and cluster analysis to discuss evolutionary relationships among lily (Lilium L.) germplasm, showing that species and cultivars could be divided into two sections, Lilium and Sinomartagon. Thus, in the case of wild species of lily, classification of pollen morphology was consistent with the morphological classification.

In our work, we found that most of the cultivars in Group I belonged to LG, which has P. lactiflora as its parent. The tetraploid cultivar Athena (Y) was obtained by Saunders in 1949 (Allan, 1995) through a hybrid combination of P. lactiflora × [(P. acrophylla × P. mlokosewitschii) × P. officinalis], so it was clustered with diploid cultivars and not with the tetraploid cultivar. In Group II, ‘Nosegay’ (O) and ‘Roselette’ (P), which had P. tenuifolia as a common parent, formed a small subgroup. ‘Red Red Rose’ (K) and ‘Paladin’ (W), which had P. lobata as a common parent, were clustered together. ‘Buckeye Belle’ (I), ‘Brightness’ (J), ‘Flame’ (L), ‘Pink Hawaiian Coral’ (X), and ‘John Harvard’ (V), which had P. officinalis and P. lactiflora as their parents, were clustered into another subgroup. ‘Laddie’, which had P. tenuifolia and P. officinalis as its parents, formed a separate subgroup. In Group III, there was only one tetraploid cultivar Cream Delight (Z) whose genetic background is unclear. However, from the results of cluster analysis, it could be inferred that its parents might be distant from P. lactiflora and P. officinalis. In general, the result of this study is in agreement with the view of Xu et al. (2008) who claimed that pollen characteristics can reflect genetic relationships.

The application of pollen morphological characteristics in cross breeding.

Clustering results of 26 herbaceous peony cultivars based on pollen characteristics. 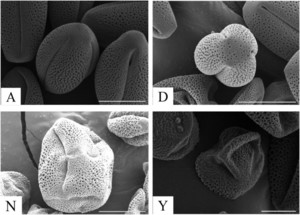 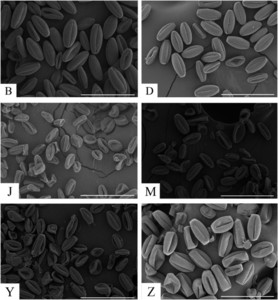 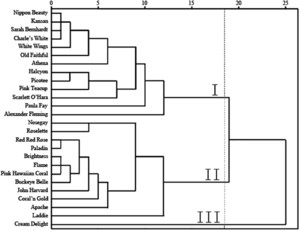