Calcium is an essential element and an important ubiquitous messenger that participates or modulates many intracellular metabolic processes of plant growth and development (Bush, 1995; Ge et al., 2007a; Hepler and Wayne, 2005; Jones and Lunt, 1967). In flowering plants, calcium plays crucial roles in regulating sexual reproduction processes such as pollen germination, pollen tube growth (Cardenas et al., 2008; Franklin-Tong, 1999; Hepler, 1997; Heslop-Harrison, 1987; Kwack, 1967; Steinhorst and Kudla, 2013), and fertilization (Antonie et al., 1999; Digonnet et al., 1997; Santella et al., 2004; Tian and Russell, 1997; Whitaker, 2006). However, insufficient information is available on calcium distribution during microsporogenesis and anther development. The development of anthers is complicated. Cells in different anther tissues undergo different processes that lead to conspicuous changes in morphology and structure; these processes include meiosis in microspore mother cells, degeneration of tapetal cells, polarization in microspores during the formation of large vacuoles, and pollen wall formation after releasing from tetrads. Anther cell differentiation during anther development is strictly regulated in accordance with specific spatial and temporal processes, and calcium may play a role in some of these processes. Tian et al. (1998) found that numerous calcium precipitates accumulate within the tapetum and locules of Oryza sativa anthers during anther development. They also discovered that sterile anthers display abnormal calcium distribution compared with fertile anthers in a photoperiod-sensitive genetically male-sterile O. sativa line. Meanwhile, Meng et al. (2000) observed that more calcium precipitates accumulate in the cells of the vascular bundles of anthers in a sterile Triticum aestivum line than in those of a fertile maintainer line. These results indicate that the abnormality of calcium distribution is related to anther abortion. However, to date, the features of calcium distribution in anthers have been investigated in only a few species (Ge et al., 2007b; Kong and Jia, 2004; Qiu et al., 2009), and the mechanism by which calcium regulates anther development is unclear. In the present study, we used potassium antimonite to localize and detect pools of loosely bound calcium in anther cells of C. oleifera, and we investigated the relationship between calcium distribution and anther development.

Camellia oleifera, a species of the Theaceae family, is native only to China. Camellia oil can be extracted from C. oleifera seeds, which have been used in China for more than 1000 years (Ruter, 2002). The polyunsaturated and good phenolic content of camellia oil is up to 80% (Yu et al., 1999). Camellia oil is a high-quality cooking oil that is similar to olive oil and it stores well at room temperature (Ruter, 2002). However, the yield of C. oleifera is very low, which is closely related to sexual reproduction. Anther plays an important role in the sexual reproduction of C. oleifera. The present study aims to explore the role of calcium in anther development. This study may serve as a theoretical basis for the sexual reproduction of C. oleifera.

Camellia oleifera anthers selected at different developmental stages were squeezed and examined under a microscope to determine their developmental stages. The anthers were then fixed at room temperature for 3 h in 2% glutaraldehyde (v/v) in 0.1 mol·L−1 phosphate buffer (pH 7.8) that contains 1% potassium antimonite (K2H2Sb2O7·4H2O). The use of potassium antimonite to precipitate calcium was detailed by Ge et al. (2007b). The samples were fixed in glutaraldehyde, washed three times for 30 min each in buffered 1% antimonite (w/v), and then postfixed in 1% OsO4 (w/v) containing 1% antimonite for 16 h at 4 °C. The samples were then washed three times for 30 min each in buffer, dehydrated in a graded acetone series, and then embedded in Spurr’s resin. At each stage, at least 10 anthers were embedded, and five samples were sectioned at 80 nm thick and stained with 2% uranyl acetate (w/v) in 50% methanol (v/v). Subsequently, the sections were then washed and air-dried before being observed and photographed under a transmission electron microscope (JEM-100CX; JEOL, Tokyo, Japan).

Camellia oleifera has typical anthers with five layers of somatic cells in the anther wall, including one epidermal layer, one endothecium, two middle layers, and a tapetum. Before meiosis, the microspore mother cells (MMCs) separated from each other and were surrounded by thick callose walls (Fig. 1A). Numerous small organelles were observed in the cytoplasm of the MMCs. A layer of calcium-induced precipitates was observed on the callose walls of the MMCs and fewer precipitates in the cytoplasm (Fig. 1B).

After MMC meiosis, four haploid microspores were surrounded by a common callose wall to form a tetrad. Many precipitates remained on the surfaces of tetrad microspores. These precipitates were mainly limited to the pollen primexine, but a few were present in the microspore cytoplasm (Fig. 1C).

At this developmental stage, the number of precipitates in the tapetal cells clearly decreased, and only a few were present in the small vacuoles of the cells. Many Ubisch bodies were present on the surfaces of the tapetum (locules) and some of the precipitates were distributed on the external surface of the Ubisch bodies (Fig. 1E). In the epidermal cells of the anther wall, the number of calcium precipitates clearly increased and were mainly located in the vacuole membrane (Fig. 1F).

At the late microspore stage, the cytoplasm matrix of anther epidermal cells still contained many calcium precipitates, but only a few were present in the endothecium and the middle cell layer (Fig. 2E). Meanwhile, the structure of the tapetal cells became indistinct and their cytoplasmic electron density increased, suggesting that the cells began to degenerate. The number of precipitates decreased in the degenerating tapetal cells (Fig. 2F).

Before meiosis occurred in the MMCs of C. oleifera, the anthers accumulated numerous calcium precipitates, which were mainly located in the callose wall of the MMCs. During intine formation, calcium began to appear in the intine at the tetrad stage. After young microspores were released from the tetrad, calcium appeared between the endexine and the intine. At the mature pollen stage, a large number of calcium precipitates was present on the pollen exine. The pollen wall began to form at the tetrad stage. Previous studies showed that the cell wall is one of the largest calcium stores in plant cells and that pollen walls contain the most calcium in pollen grains (Kong and Jia, 2004). Furthermore, the pollen of Gasteria verrucosa (Tirlapur and Willemse, 1992) and Lilium longiflorum (Reiss et al., 1985) can release calcium during the hydration and early germination phases. Thus, we proposed that the accumulation of calcium in the callose walls of MMCs and the tetrad might be correlated with the formation of pollen walls. Moreover, the mature pollen wall might be a storage of calcium for pollen-pistil interaction and pollen germination.

In this study, there is an interesting phenomenon. The calcium precipitates were present in the cytoplasm of young microspores, particularly within small vacuoles. Then, the small vacuoles coalesced to form a large vacuole and the calcium precipitates disappeared from the late microspores. Hepler and Callaham (1987), Hepler and Wayne (1985), Izant (1983), and Wick et al. (1985) demonstrated that calcium is associated with critical events of mitosis in plant cells. After the microspore divided to produce a bicellular pollen grain, the large vacuole in the vegetative cell disaggregated and calcium precipitates reappeared in the vegetative cell cytoplasm. Then, the number of calcium precipitates in the bicellular pollen grains continued to decrease. Calcium is involved in the cell division and polarized tip growth process of pollen tubes (Tirlapur and Willemse, 1992). The calcium distribution pattern observed during C. oleifera anther development exhibited spatial-temporal features; high levels of calcium appeared in C. oleifera anthers at a specific time (at the microspore stage) and in a specific region (vacuole formation of microspores). This result suggests that calcium regulates large vacuole formation in microspores during pollen development in C. oleifera.

The physiological function of calcium during anther development remains unknown. Calcium can regulate many cellular functions according to its cellular location, binding, and solubility (Hepler and Wayne, 2005). Calcium also appears to play a unique and important role in plant cells during wall accretion, vacuolar turgor maintenance, and stomatal movement (Bolwell, 1993; De Silva et al., 1985a, 1985b; Inoue and Katoh, 1987; Schwartz et al., 1988). However, a few studies have examined calcium distribution during anther development and the physiological function of calcium in anther development has not previously been proposed. In the present study, calcium precipitates in anthers mostly accumulated during microspore development. Thus, the presumed functions of calcium in pollen development are as follows: 1) regulating the activation of voltage-dependent ion channels (Hedrich and Neher, 1987); and/or 2) providing osmotic pressure to aid in the formation of vacuoles within a microspore, which contributes to the polarization of the cytoplasm preceding the unequal division of the microspore. In this study, we presumed that the physiological function of calcium during anther development is regulating large vacuole formation in the microspore, which distributes microspore nuclei unequally and initiates microgametogenesis. As pollen matures, calcium leaves the pollen grain and accumulates on the pollen surface, which prepares the pollen for germination when it lands on a stigma.

The pollen grain with a large vacuole of Camellia oleifera at the microspore stage was sectioned (1 μm thick) and pasted on a slide. The asterisk indicates the large vacuole position in a microspore, which was analyzed by using an X-ray detector. V = vacuole. 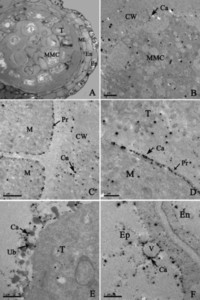 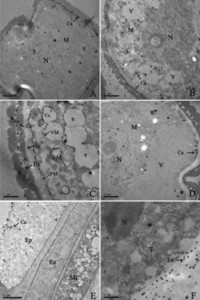 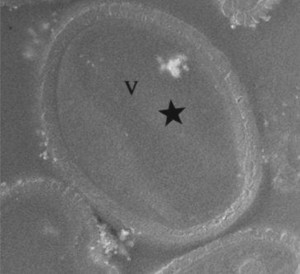 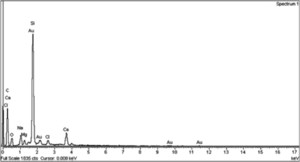 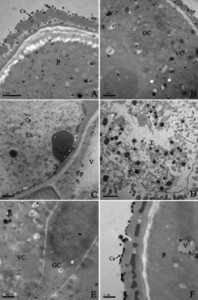