Ornamental flowering cherry trees are popular plants for street, commercial, and residential landscapes. Grown primarily for their spring bloom, flowering cherries have been in the United States since the mid-1850s (Faust and Suranyi, 1997), and they gained in popularity after the historic Tidal Basin cherries were planted in Washington, DC, in 1912. Over 1.2 million plants are sold wholesale each year at a value of more than $32 million [U.S. Department of Agriculture (USDA), 2010]. Despite the large number of Prunus species with diverse origins and ornamental traits, the most widely cultivated flowering cherry trees planted in the United States represent only a few species, primarily P. serrulata, P. subhirtella, and P. yedoensis. The U.S. National Arboretum has an ongoing breeding program aimed at broadening this genetic base by developing new cultivars of flowering cherries with disease and pest resistance, tolerance to environmental stresses, and superior ornamental characteristics. Hundreds of interspecific Prunus hybridizations have been carried out at the U.S. National Arboretum over the past 30 years. Verifying whether these resulting plants are true hybrids is complicated by the fact that morphological characteristics such as flower, leaf, or bark traits are quite variable and heterogeneous among the various taxa and are therefore often inadequate for confirming hybridity. The objective of this study was to verify the pedigree of a number of the putative interspecific hybrids created at the U.S. National Arboretum.

Prunus parent taxa and hybrids used in this study are listed in Table 1. Controlled crosses were performed in the field during the year indicated. Crosses were made by covering clusters of unopened flower buds with a pollination bag and then hand-pollinating flowers as they opened using a camel hair paintbrush. In cases in which the pollen parent bloomed before the seed parent, anthers were collected from the pollen donor just before flower opening and allowed to dehisce in gelatin capsules which were stored in paper coin envelopes in the refrigerator before use. In most cases, the seed parent was emasculated before pollination. Generally, at least 50 flowers were pollinated for each cross, and some crosses were attempted over several years. As seeds developed, they were covered with mesh bags to prevent loss and harvested when ripe. Seeds were cleaned of fruit, sown in flats containing a soilless potting mix (milled sphagnum and course sand, 1:1), and then moist-stratified for three months in the dark at 4 °C. After stratification, flats were placed in a 21 °C greenhouse for seed germination. Seedlings were transplanted to containers and ultimately to the field. 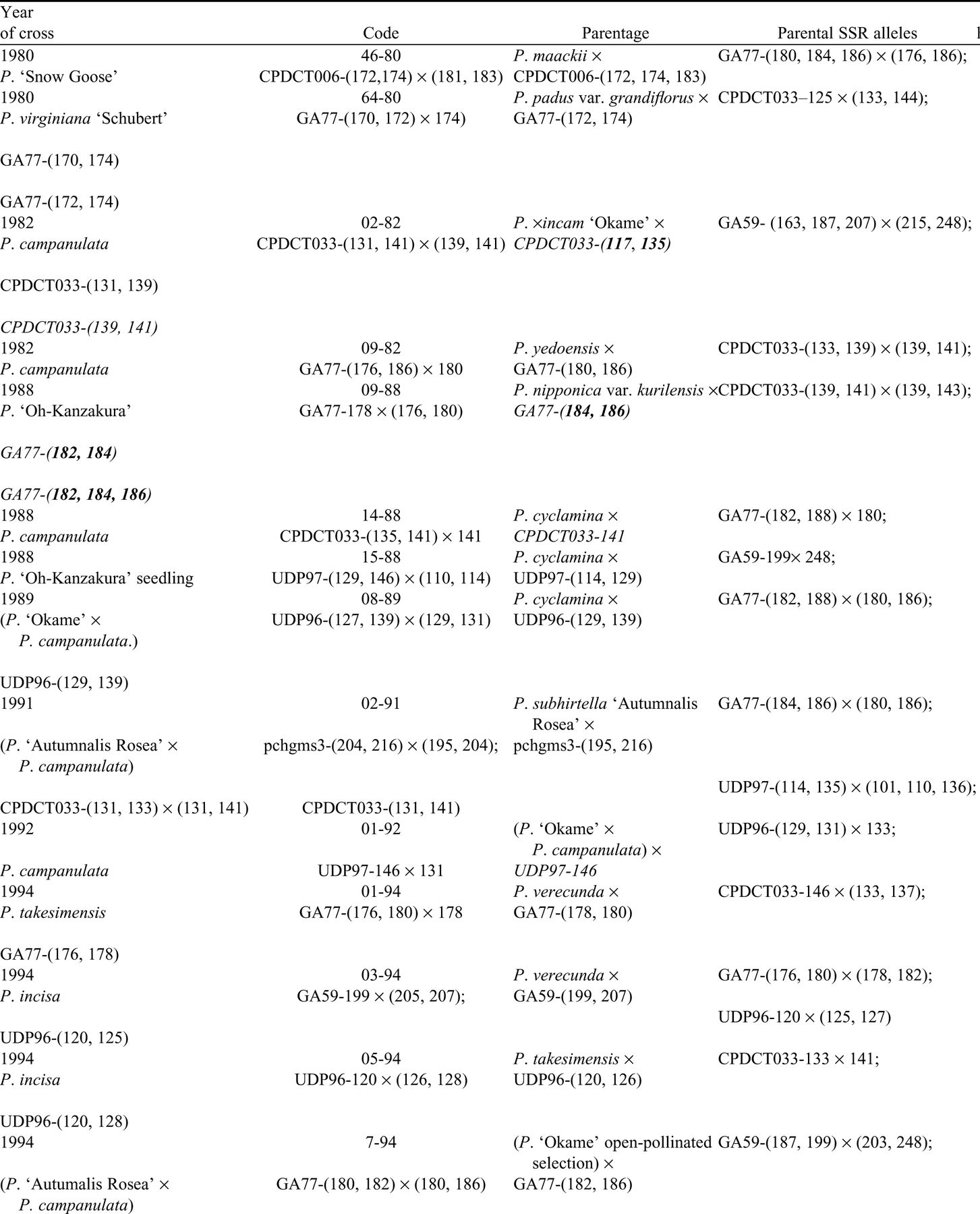 In this study, 84 plants representing 43 interspecific hybrids using ≈20 taxa of ornamental flowering cherry were evaluated with SSR markers to verify putative hybrids; 73 of these 84 plants could be verified as hybrids (Table 1). In some cases, these hybrids represent a sampling of a larger population; in other cases, only a few progeny resulted from the cross. We considered plants to be confirmed hybrids if at least two SSR markers from each parent were observed in the progeny (Fig. 1). Because of the proximity of different Prunus species in our research nurseries, it is possible that paternal bands could have come from another species that share the same allele as the pollen parent used in the cross. However, this contamination is likely to be rare because flowers were protected with pollination bags to exclude insect pollinators.

All hybrid combinations tested revealed confirmed hybrids for at least one plant from that cross with the exception of P. nipponica var. kurilensis × P. kanzakura ‘Oh-Kanzakura’ (1988), which showed non-parental bands in all progeny; and P. maackii × P. yedoensis (1995), P. tschonoskii × P. takesimensis (1997), and P. nipponica var. kurilensis × P. ussuriensis (1997), which all showed non-parental bands as well as maternally inherited bands, but no paternally inherited bands. Non-parental bands were observed with most primer sets used (Table 2; Fig. 2), indicating that the non-parental bands are unlikely to be an artifact of a specific primer amplification. Previous studies (Ma et al., 2009) using four of these SSR primers (CPDCT033, GA59, GA77, and pchgms3) also showed occasional non-parental bands but revealed that these primers followed expected inheritance in ornamental Prunus and could therefore be useful in hybrid verification. Plants that could not be conclusively verified as hybrids may be open-pollinated or possibly self-pollinated progeny.

Taxa used for crosses were chosen based on phenotypic traits as well as our desire to create novel interspecific hybrids with underused germplasm. P. maackii (Manchurian or Amur cherry) is a cold-hardy species with ornamental exfoliating bark and a fast growth rate. P. campanulata (Taiwan cherry) has very dark pink flowers and an early bloom time but is only hardy to USDA Hardiness Zone 8 (Krussmann, 1984; USDA, 2012b). P. nipponica var. kurilensis, and to a lesser extent P. incisa, have a short, shrubby habit that could be valuable in creating cultivars for smaller landscapes. The P. takesimensis germplasm that we used was collected from a site with wet soil so may contribute tolerance to wet sites. P. ‘Autumnalis Rosea’ has a unique spring and fall bloom cycle. P. verecunda is a larger, vigorous species with a late bloom date (Flower Association of Japan, 1982) that could be useful in prolonging the spring bloom display. Other taxa such as P. yedoensis, ‘Snow Goose’, ‘Okame’, and P. cyclamina were used primarily for superior flower traits.

Generally, interspecific hybridizations in Prunus are relatively easy to achieve. We have reported confirmed interspecific ornamental cherry hybrids previously (Ma et al., 2009; Pooler et al., 2012), as have others (Ingram, 1970; Kuitert, 1999; Ohta et al., 2007; Tsuruta et al., 2012). In fact, many cultivars are the result of interspecific hybridizations [e.g., Prunus ×incam ‘Okame’ (Olsen and Whittemore, 2009)]. Spontaneous hybridization between native and cultivated species as well as naturalization of species and selections beyond their native ranges has led to some of the confusion as to the taxonomic and nomenclatural treatment of the ornamental Prunus (Jefferson and Wain, 1984; Notcutt and Notcutt, 1935). Classification is further complicated by the fact that morphological characters that were used to classify Prunus species previously such as inflorescence type have evolved independently and repeatedly (Bortiri et al., 2006; Liu et al., 2012). Hence, some of the “wide” hybrids between members of different sections or subgenera are less surprising as the taxonomic issues are resolved and we discover that these taxa are not as distantly related as previously thought. For example, P. maackii was thought to be a member of the subgenus Padus based on floral morphology (e.g., Rehder, 1940); however, more recent molecular studies support its closer association with other ornamental taxa in subgenus Cerasus section Cerasus (Bortiri et al., 2001, 2002; Lee and Wen, 2001). The ease with which we have been able to create interspecific hybrids between P. maackii and other members of section Cerasus further supports this classification.

The species used in this study all fall within the subgenus Cerasus section Cerasus (USDA, 2012a), with the exception of P. padus and P. virginiana. Crosses between these two species (subgenus Cerasus, section Laurocerasus) resulted in confirmed hybrids (Table 1). When used as a parent in further crosses with species from section Cerasus, this hybrid has not resulted in confirmed viable progeny. We have also attempted crosses between other members of section Laurocerasus (including P. buergeriana, P. grayana, P. laurocerasus, P. lusitanica, P. padus, and P. virginiana) and species in section Cerasus with no confirmed hybrids. Other attempted wide hybrids included crosses between P. mume (subgenus Prunus, section Armeniaca) and P. ussuriensis (subgenus Prunus, section Prunus) with species in subgenus Cerasus section Cerasus. A few seeds resulted from these crosses; however, seeds were only produced when section Cerasus species served as the seed parent, which makes it more likely that these seedlings are the result of open pollination (contamination) by pollen from nearby and abundant specimens of the same section rather than true wide hybrids. We will continue to investigate the possibility of hybrids between sections and subgenera to combine traits such as evergreen foliage, disease resistance, and superior flower qualities.

Ploidy differences in plants can also contribute to barriers to interspecific hybridization. The basic chromosome number for most Prunus species is n = 8 (Darlington and Wylie, 1955). With the exception of P. maackii and members of the section Laurocerasus, the taxa used in this study were all diploid. Crosses between P. maackii (4×) and the diploid taxa resulted in confirmed triploid plants (Pooler et al., 2012).

We have used SSR markers as a reliable and straightforward method to determine or verify the parentage of suspected hybrids. By verifying these hybrids, this study shows how relatively easy it is to broaden the genetic base of ornamental flowering cherries by hybridizing within section Cerasus. These markers will also be useful to verify the rarer hybrids between sections or subgenera in Prunus. By extension, in demonstrating how readily diverse flowering cherry taxa can be hybridized to broaden the genetic base, the results of this study also emphasize the importance of maintaining and expanding the pool of available Prunus genetic resources in the United States to create these new hybrids. 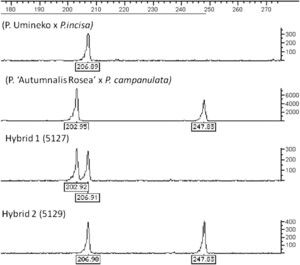 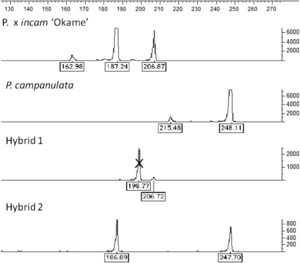