Transferability of Microsatellite Markers in the Betulaceae

in Journal of the American Society for Horticultural Science
Authors: Kahraman Gürcan1 and Shawn A. Mehlenbacher1
View More View Less

European hazelnut belongs to the family Betulaceae, which is one of eight families of the Order Fagales. Betulaceae, which includes six genera and ≈140 species, is subdivided into two clades, Betuloideae and Coryloideae. Betuloideae includes Alnus (35 species), and Betula (35–60 species), while Coryloideae includes Carpinus (35 species), Corylus (11–13 species), Ostrya (10 species), and Ostryopsis (two species) (Chen et al., 1999; Yoo and Wen, 2002). The basic chromosome number is 14 for Alnus and Betula, 11 for Corylus, and 8 for Carpinus, Ostrya, and Ostryopsis (Botta et al., 1986; Snow and Goldblatt, 1992). Betula species form a polyploid series, with chromosome numbers of 28, 56, 70, 84, and 112 (Järvinen et al., 2004), while Corylus species are diploid. Most species in the Betulaceae are wind-pollinated and monoecious. Most are distributed in temperate regions of the Northern Hemisphere, while Ostryopsis is endemic to eastern Asia. Despite the variation in chromosome number and genome size among species of the Betulaceae, some degree of microsatellite marker transferability is expected based on results in other plant families.

In this study, we developed new SSR markers based on DNA sequences of Alnus, Betula, and Corylus retrieved from a public database. We used these new SSR primer pairs, published polymorphic marker primer pairs for Betula, and markers developed in our laboratory for Corylus, to investigate their transferability in the family Betulaceae. Betula primer pairs that amplified in Corylus were characterized, and new primer pairs that segregated in our Corylus mapping population were assigned to linkage groups of the european hazelnut.

A total of 50 hazelnut accessions, including the parents of our mapping population, were used to characterize the SSR primer pairs (Gürcan et al., 2010). Of these, 24 were used in the initial screening of markers. These 50 accessions were chosen as a diverse subset of the 198 unique accessions fingerprinted by Gökirmak et al. (2009). Trees of all hazelnut accessions were growing in the field at the U.S. Department of Agriculture-Agriculture Research Service-National Clonal Germplasm Repository (USDA-ARS-NCGR) and the Oregon State University Department of Horticulture's Smith Horticulture Research Farm in Corvallis. A mapping population of 144 seedlings (Mehlenbacher et al., 2006) was used for segregation analysis.

Sixty-nine genotypes representing six genera (Table 1), including 9 species of Alnus, 15 species of Betula, 4 species of Carpinus, 11 species of Corylus, 3 species of Ostrya, and 2 species of Ostryopsis, were used in the transferability study. Leaf material was obtained from several sources, including four in Corvallis, OR (USDA-ARS-NCGR, Smith Horticultural Research Farm, Oregon State University campus, and Peavy Arboretum), the Morris Arboretum of the University of Pennsylvania in Philadelphia, and the U.S. National Arboretum in Washington, DC.

DNA from Corylus accessions and the mapping population was extracted from young leaves of field-planted trees, as described by Davis et al. (1998) and modified by Lunde et al. (2000). DNA was extracted from other genera using a modified Puregene extraction protocol (Gentra Systems, Minneapolis). Proteinase K and RNase A digestion steps were included in the extraction, and protein precipitation was repeated twice. All template DNA was diluted in TE buffer to 3.5 ng·μL−1 before amplification. 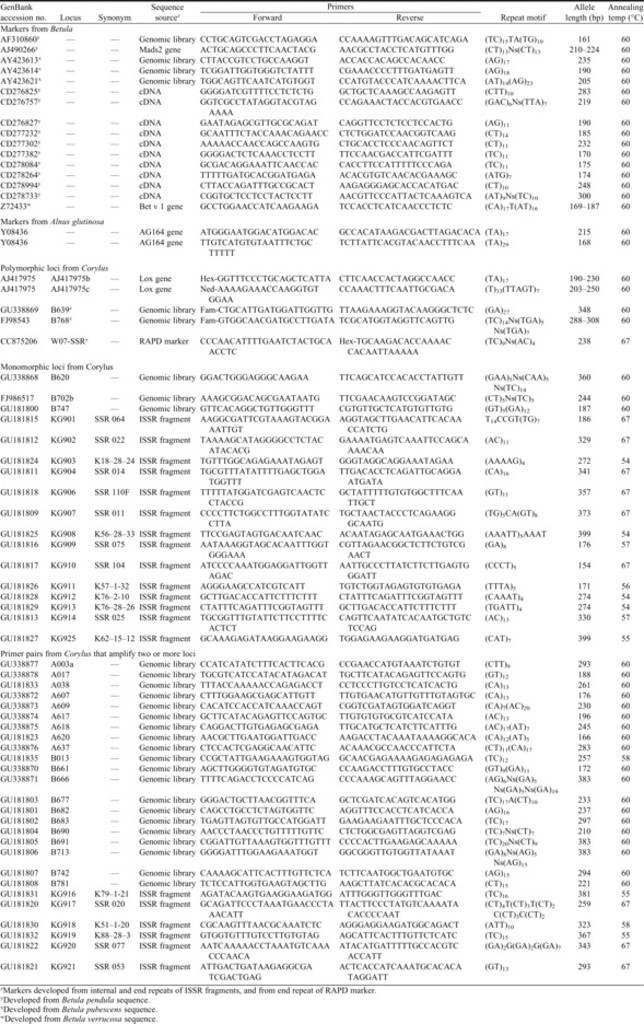 In 2006, all Betulaceae sequences were retrieved from the GenBank database: 3300 for Betula, 23 for Alnus, and 45 for Corylus. Unique sequences were identified using the sequence assembly program CAP3 (Huang and Madan, 1999) at the Oregon State University (OSU) Center for Genome Research and Biocomputing, and then sequences were screened for the presence of SSRs with the program SSRIT (Temnykh et al., 2001). Primers that flanked the microsatellites were designed using the Primer3 program (Rozen and Skaletsky, 2000) with the following criteria: 22 to 24 bp in length, 30% to 55% guanine-cytosine (GC) content, and 60 °C annealing temperature. From these database sequences, we developed 20 new SSR markers: 16 from Betula sequences, 2 from Alnus, and 2 from Corylus (Table 2).

Polymerase chain reactions (PCRs) were conducted in a 15-μL PCR mixture containing 0.3 μm each of forward and reverse primers, 1 × Biolase NH4 reaction buffer, 3 mm MgCl2, 200 μm of each dNTP, 3 to 5 ng of template DNA, and 0.25 units of Biolase DNA polymerase (Bioline, Randolph, MA). The thermocycler was programmed to denature DNA at 94 °C for 3 min, followed by 40 cycles of 94 °C for 40 s, annealing temperature for 60 s, 72 °C for 60 s, and a final 7-min extension step at 72 °C. PCR products were separated by electrophoresis through 3% agarose. The gels were stained with ethidium bromide, placed under ultraviolet light, and photographed using an imaging system (UVP, Upland, CA). Amplification was indicated by visible bands of the expected size (intense or faint) on the agarose gels. Amplifications that gave multiple bands with a large size range were scored as zero and were not considered transferable.

The initial screening of the new markers in C. avellana used 24 accessions (Gürcan et al., 2010) and the PCR mixture and thermocycler program described above. PCR products were separated on 3% agarose gels, and polymorphic primer pairs were identified visually. For polymorphic primer pairs, forward primers were labeled fluorescently with 6-FAM, HEX, or NED and were used to amplify 48 accessions plus the parents of our mapping population (OSU 252.146 × OSU 414.062) (Mehlenbacher et al., 2006) using the same PCR cocktail and thermocycler program described above. PCR products, 1 μL from each of four primer pairs, were multiplexed by diluting in 80 μL of distilled water. A 1-μL aliquot of the mixture was sent to the Core Laboratories of the OSU Center for Genome Research and Biocomputing where fragment sizes were determined using a capillary electrophoresis instrument (ABI 3100; Applied Biosystems, Foster City, CA).

Expected heterozygosity (He), observed heterozygosity (Ho), and polymorphic information content (PIC) were calculated for the polymorphic primer pairs using PowerMarker (Liu and Muse, 2005). He was calculated according to the formula He = 1 − ∑pi2, where pi is the frequency of the ith allele (Nei, 1973). Ho was from direct counts, and the PIC value for each locus was estimated using PowerMarker as where pi and pj are the frequencies of the ith and jth alleles, respectively. The frequency of null alleles (r) was estimated as r = (He − Ho)/(1 + He) (Botstein et al., 1980) in a spreadsheet (Table 3).

Characteristics of new polymorphic SSR loci from Betula and Corylus sequences based on amplification of 50 Corylus avellana accessions. 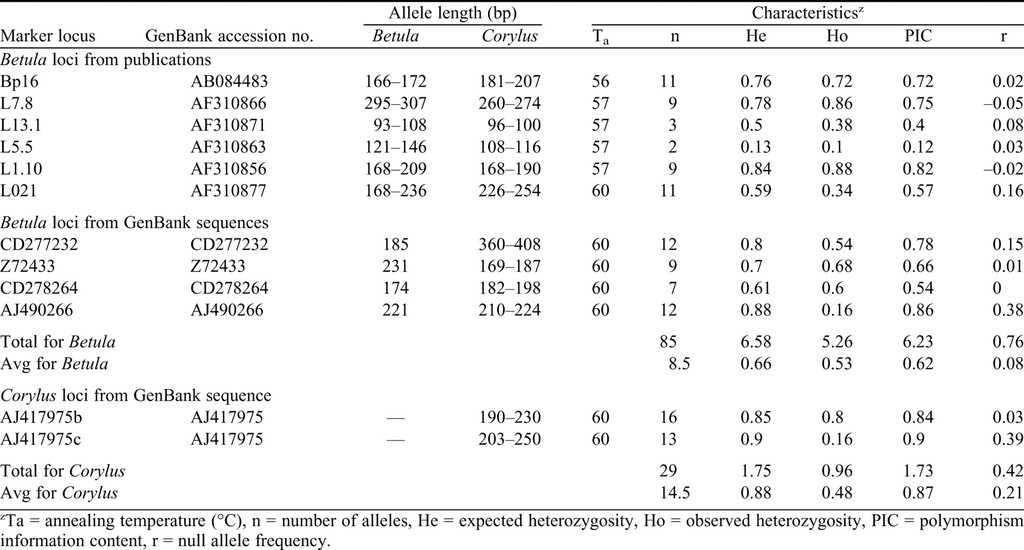 Segregation and mapping of polymorphic markers.

Observed segregation ratios in the mapping population were compared with expected Mendelian ratios using chi-square goodness-of-fit tests (Table 4). The new markers were placed on the hazelnut linkage map using JoinMap 3.0 (van Ooijen and Voorrips, 2001) as described by Mehlenbacher et al. (2006). The Kosambi mapping function was used for the calculation of map distances and a LOD score of 7.0 was used for the determination of linkage groups.

We downloaded 3368 sequences from GenBank: 3300 for Betula, 23 for Alnus, and 45 for Corylus. Alignment of the Betula sequences resulted in 527 contigs and 605 singlet fragments. In these 1132 unique fragments, 254 fragments contained SSRs with repeats ≥10 bp, of which 35 contained repeats ≥20 bp. Comparison of these 35 with published SSR-containing sequences revealed that 19 had already been used for SSR marker development, while 16 had not yet been used. All 23 Alnus sequences were unique; four SSR-containing regions were ≥10 bp, of which two in a single sequence had SSRs ≥20 bp. All 45 Corylus sequences were unique; 10 regions in these sequences had SSRs ≥10 bp, of which three in a single sequence had repeats ≥20 bp. Unique sequences with SSRs ≥20 bp (16 from Betula, 2 from Alnus, and 3 from Corylus) were used to develop SSR markers. Of the 16 Betula primer pairs, 6 failed to amplify in Corylus, and only 4 of the 10 that amplified Corylus were polymorphic. Of the two Alnus primer pairs, one failed to amplify in Corylus, and the other generated monomorphic products. Three Corylus primer pairs were designed from a single sequence. Two (AJ417975b and AJ417975c) produced polymorphic bands, but amplification with the third primer pair (AJ417975a) was poor and the locus was not investigated further. Only AJ417975c segregated in the mapping population.

Eight of the 10 Betula and one of the two Corylus markers segregated in the mapping population and were assigned to a linkage group (LG) based on cosegregation with existing markers (Mehlenbacher et al., 2006) (Table 4). AJ490266 showed a deficiency of 224/224 homozygotes, but the other seven loci showed good fit to Mendelian expectation.

The locus AJ490266, developed from the Betula gene BpMADS2, was assigned to hazelnut LG7. BpMADS2 is similar to PISTILLATA (PI) from Arabidopsis thaliana and GLOBOSA (GLO) from Antirrhinum majus. They are homeotic B-function genes for the specification of the identity of petals and stamens (Järvinen et al., 2003). Locus Z72433, developed from the major Betula pollen allergen BetV 1 (Hoffmann-Sommergruber et al., 1997), was placed on hazelnut LG1.

Hazelnut pollen and food allergies are common in humans. In Europe, 0.1% to 0.5% of the population shows an allergic reaction to hazelnut pollen. Allergens from Corylus and Betula have been identified and characterized at the molecular and biochemical level (Lüttkopf et al., 2001; Schocker et al., 2002). Several forms of the hazelnut allergen have been sequenced, including Cor a 1.04, Cor a 1.01, Cor a 2, Cor a 8, Cor a 9, and Cor a 11. The hazelnut pollen allergens are similar to the major Betula pollen allergen Bet v 1 (Swoboda et al., 1995), which is a homolog of Cor a 1.04.

Amplification of 69 accessions of the Betulaceae using microsatellite markers developed from Betula, Alnus, and Corylus sequences.

Amplification of 32 Betulaceae accessions at 147 microsatellite loci from Corylus.

As expected, amplification was higher in species of the genus from which the SSR locus was developed than in the other genera. The Betula primer pairs amplified 92.3% of the Betula accessions and 41.2% of the Corylus accessions. The first set of Corylus primer pairs amplified 80.8% of the Corylus accessions and 38.4% of the Betula accessions. The second set of Corylus primer pairs amplified 91.9% of the Corylus accessions and 53.9% of the Betula accessions. Recent comparative genomic research has shown that despite vast diversity in angiosperms, plants have retained homologous genes with the same or very similar function during evolution. Homoeologous chromosomes in allopolyploid species and the chromosomes of closely related diploid species are extensively conserved (Bennetzen, 2000; Paterson et al., 2007). Comparisons of related species have shown gene synteny and marker colinearity with some chromosome rearrangements through translocation or inversions. Varshney et al. (2005) found that of 165 barley (Hordeum vulgare) EST-SSR loci studied, 78.2% showed amplification in wheat, followed by 75.2% in rye (Secale cereale), and 42.4% in rice (Oryza sativa). Heesacker et al. (2008) also reported that 88.6% of the 466 sunflower (Helianthus annuus) EST-SSR or INDEL markers amplified alleles from one or more wild species, whereas 14.8% amplified alleles from distantly related safflower (Carthamus tinctorius), and 14.4% amplified alleles from lettuce (Lactuca sativa), a distantly related genus in the Asteraceae. Dirlewanger et al. (2004) compared maps for Prunus and Malus using 30 homologous SSR markers. Barbara et al. (2007) reviewed 64 microsatellite marker transferability studies and found an average cross-species transferability success rate of about 60% in eudicots and about 40% in monocots, whereas between genera, it was only ≈10% for eudicots. Our results show high transferability (38%–54%) in the Betulaceae that is unaffected by the polyploidy of some Betula accessions.

Relationship of transferability and taxonomy.

Results of SSR transferability are in agreement with the generally accepted taxonomy of the Betulaceae. Traditionally, Betulaceae is divided into two subfamilies, Betuloideae (Alnus and Betula) and Coryloideae (Corylus, Carpinus, Ostrya, and Ostryopsis) (Chen et al., 1999). The organelle sequences of Chen et al. (1999) support this classification. Betula species were studied by Järvinen et al. (2004) and Schenk et al. (2008), Alnus species by Chen and Li (2004) and Navarro et al. (2003), Carpinus by Yoo and Wen (2002), and Corylus by Erdoğan and Mehlenbacher (2000) and Forest and Bruneau (2000). Our results indicate better amplification within the subfamily of origin, and lower amplification in the other subfamily.