Images for two-dimensional fluorescence difference gel electrophoresis (A) and spot picking gel (B) of tomato leaf protein. Gel (A) shows differential expression of two samples and an internal standard, labeled with Cy3, Cy5, and Cy2, respectively. Only those well-resolved spots within the height-lighted square were analyzed for protein abundance. 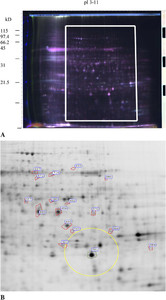