Cuticular Cracking on Nectarine Fruit Surface: Spatial Distribution and Development in Relation to Irrigation and Thinning

Journal of the American Society for Horticultural Science

Evolution of the amount of water per day applied per ‘Zephir’ nectarine container-grown tree in 2005.

Schematic representation of the three main zones of a nectarine fruit (peduncle, cheek including the suture, and stylar end). Some examples of the observed subzones are represented in gray [each square represents 8 mm2 (figure not to scale)]. The bold line symbolizes the suture.

Evolution of the cuticular crack surface area per zone surface area over time for stylar end, peduncle, suture, and cheek of ‘Zephir’nectarine fruit, in relation to fruit growing conditions. Box plots visually display the median (black bar), the first quartile, the third quartile (gray box), and the minimum and the maximum of a data set (extreme segments). The asterisks represent the significant nonparametric test of multiple comparisons at a significance level of 5% between zones for a given date and a given treatment.

Distribution of observed cuticular crack surface areas over time [in days after full bloom (DAFB)] on ‘Zephir’ nectarine fruit from the well irrigated treatment. Twenty classes of surface area are represented, ranging from 0 to 0.1 mm2, at intervals of 0.005 mm2. Each point represents the number of observed cuticular cracks with a surface area comprised between the indicated limits for one class. Note the log scale for the y-axis.

Mean values of fruit fresh weight of ‘Zephir’ nectarine fruit according to fruit growing conditions over time. Points represent the average per date, and segments represent the corresponding se.

Mean values of cuticular crack surface area per nectarine fruit surface area (‘Zephir’) for six experimental data sets in relation to days after full bloom (DAFB). Letters and ellipses indicate significant differences at the 5% level of the Kruskal–Wallis tests and the nonparametric tests of multiple comparisons between treatments and for one period of observation. Comparisons were performed at four dates of observation (≈100, 117, 125, and 135 DAFB). Points represent the mean value for an observation date, and segments represent the corresponding se. 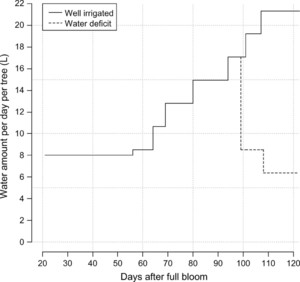 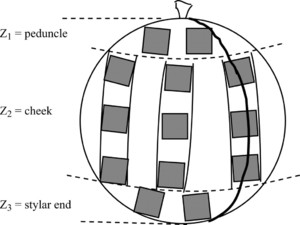 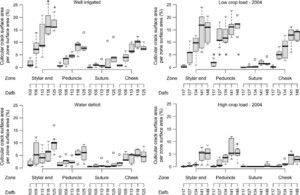 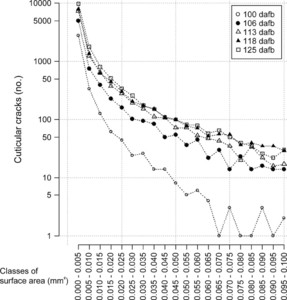 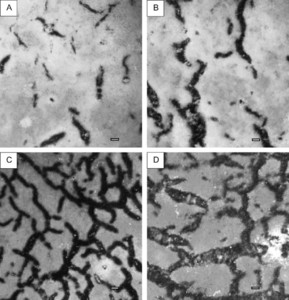 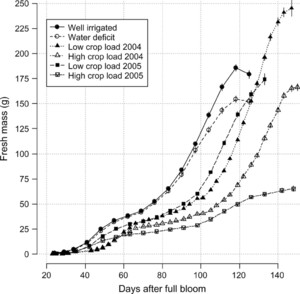 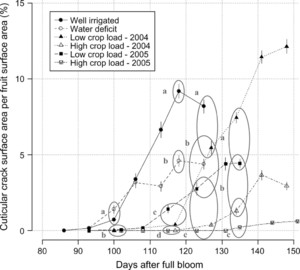 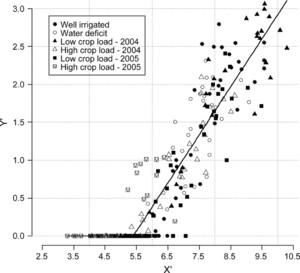