Broccoli florets (cv. Naomidori) (398 and 405 g), bunches of spinach leaves (cv. Bullitt) (31.3 and 42.2 g), and onion bulbs (cv. Kunnepu) (261, 288, and 328 g) were purchased at the Metropolitan Central Wholesale Market in Tokyo. Vegetables with representative appearance were selected as samples from the commodities that arrived at the market in the morning on the day of experiments. These vegetables are normally expected to show rapid, moderate, and slow respiration, respectively (Robinson et al., 1975). In the current study, the number of samples was restricted to avoid denaturation of the samples during experimental treatment, because many kinds of measurements have to be done for each individual sample in a short period to assure an accurate data set. The vegetables were stored for 3 h at 20 °C before the series of measurements.

Samples were collected from the middle longitudinal site of a main stem and floral buds of a broccoli floret, the middle site of a spinach leaf, and the fourth scale leaf from the center of an onion bulb split in two at the equator. In the case of broccoli florets, the activity was measured separately for stems and for floral buds because the activity of the floral buds is predominantly due to active young cells and so might be much higher than that of the stems. The samples were frozen in liquid nitrogen immediately after sampling and ground using a frozen cell crusher. Mitochondria in the vegetable tissues were isolated using a mitochondria isolation kit (Sigma-Aldrich, St. Louis) from a prepared 0.1-g sample in a 1.5-mL microtube according to the protocol supplied with the kit.

Distribution of cytochrome c oxidase in the vegetable cells was evaluated based on the procedure of Wong-Riley (1979). The samples were collected from the same sites used for mitochondrial extraction. The sample tissues were immediately fixed with a mixture of paraformaldehyde (4%) and glutaraldehyde (1%) in 0.1 m phosphate buffer, pH 7.4, and 4% sucrose for 1 h at 4 °C. The fixed tissues were immersed in 30% sucrose for 2 d at 4 °C and frozen at −80 °C after treatment. The samples were embedded in a natural resin (Canada balsam) and sectioned at a thickness of 25 μm by a freezing microtome. The sections were immersed in a solution including 60 mg 3,3-diaminobenzidine tetrahydrochloride, 27 mL sodium acetate (0.1 m), 3 mL manganese chloride (1%), and 0.3 mL H2O2 (0.1%) for 1 h at 37 °C, rinsed twice, and developed with 30 mL of a copper sulfate solution (1%). The brown color indicates cytochrome c oxidase activity. The section was then rinsed again and dehydrated with alcohol. It was mounted on a glass slide after air-drying. Staining and preparation of mounted sections were performed by NAC Co. Ltd. (Tokyo).

The sections stained for cytochrome c oxidase were observed using a DMLM/LP optical microscope (Leica Microsystems Japan Co. Ltd., Tokyo), and the degree of staining was measured by image analysis using a DFC320 digital color camera system (Leica Microsystems Japan Co. Ltd.). All images used for the analysis of cytochrome c oxidase staining were taken under the same optical conditions to avoid variance in intensity depending on image acquisition conditions. The observed objects were zoomed 25- or 100-fold, and images were taken under the same white balance, iris, and exposure conditions at each magnification. The resolution of 100-fold zoomed images used for image analysis obtained by the system was 538 nm/pixel, where 8-bit data were allocated to red, green, and blue channels. The average luminance per cell in the tone ranges from 0 to 255, correlating with cytochrome c oxidase staining intensity, and the area of selected sites per cell were measured after the images were transformed into grayscale using Photoshop® (version 9.0; Adobe Systems Inc., San Jose, Calif.). We selected 19–70 cells (cytoplasm) per organ from onion scale leaves, leaf lamina of spinach, and stems and floral buds of broccoli florets.

Respiration rates for broccoli florets, spinach leaves, and onion bulbs are presented in Table 1. It was confirmed by statistical analysis that O2 uptake and CO2 production rates of the examined vegetables were significantly different from each other. This indicates that the samples examined are appropriate for evaluating the effect of cytochrome c oxidase on O2 uptake rate. The order of O2 uptake or CO2 production rate was broccoli florets > spinach leaves > onion bulbs (Table 1). All respiratory quotients (RQ) were almost unity. According to Kader et al. (1989), RQ ranges from 0.7 to 1.3 under aerobic conditions. Therefore, O2 uptake rates were feasible to measure without causing any physiological disorder.

Respiration rate for whole vegetable products measured by a closed method and GC.z

Ethylene is a known aging hormone that promotes enzymatic activities or respiration in horticultural products (Bleecker and Kende, 2000). Its presence is commonly needed for fruit ripening during the climacteric rise (Bleecker and Kende, 2000). This suggests that the influence of ethylene on enzymatic activities in vegetables is lower than that in fruits. According to enzyme kinetics as proposed by Michaelis and Menten (1913), the sum of enzymatic activity in a reaction system increases with the concentration of enzyme because the conditions affecting enzymatic reaction rate such as temperature, pH, and ethylene production were not different among the examined vegetables as mentioned above. Therefore, cytochrome c oxidase activity per mass measured in the current study was equivalent to cytochrome c oxidase concentration.

Oxygen uptake rates measured by in situ and in vitro methods.

Contribution of cytochrome c oxidase to O2 uptake by vegetables.

The cell area for which the luminance was high was relatively large (Table 3). The relationship between cross-sectional area and luminance of all the individual cells used for image analysis is shown in Fig. 2. The luminance decreased with the decrease in cross-sectional area of cytoplasm and, therefore, with the increase in staining intensity. Dali et al. (1997) indicated that the degree of cytochrome c oxidase staining increased with the decrease in cross-sectional area of rat (Rattus norvegicus Berkenhout) pelvic ganglion cells. This result agrees with the data in Fig. 2, although there are differences between animal and plant cells. Smith (1940) reported that the CO2 production rate of apples (Malus ×domestica Mill.) is proportional to the number of cells per unit mass. As O2 uptake rate is assumed to be almost equal to CO2 production rate under aerobic conditions (Kader et al., 1989), the result by Smith (1940) supports the validity of the result demonstrating that the luminance per cell cytoplasm increased with the cross-sectional area per cell cytoplasm (Fig. 2) because the luminance is associated with cytochrome c oxidase activity or O2 uptake rate. This suggests that the concentration of mRNA is diluted with the increase in volume per cell. This has already been disclosed by Burström (1974) using pea stems (Pisum sativum L.). The dilution also suggests a decrease in enzyme concentration including cytochrome c oxidase derived from mRNA, which would lead to a reduction in enzymatic activity per mass. This agrees with the observation that broccoli florets exhibiting rapid respiration include many young, small cells and that an onion bulb, as a storage organ exhibiting slow respiration, is composed of many aged, large cells. It was considered that the difference in cytochrome c oxidase activity or degree of staining between vegetables is affected by the size or age of the cells because vegetables were harvested at various growing stages. According to our results, the O2 uptake rate measured by gas chromatography may be associated with harvesting stage.

Relationship between cross-sectional area and grayscale luminance of vegetable cells.

Second derivative of the absorption spectrum of an onion scale leaf and a main stem of a broccoli floret, denoted by dashed and solid lines, respectively. 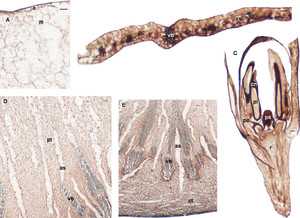 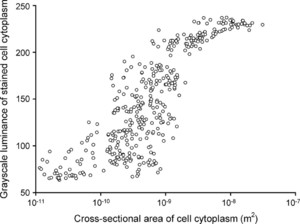 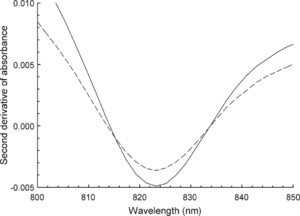