Mechanical Thinning of Mandarins with a Branch Shaker

Hand-held gasoline-powered shaker used for the mechanical thinning of ‘Clemenrubi’ mandarin and the details of the hook (upper left).

Proportions of the diameters of fruit of mechanically thinned ‘Clemenrubi’ mandarin trees that remained after shaking (blue line) and were detached by shaking (red line) in 2018. The abscissa shows the fruit size and the ordinate shows the proportion of observations; 1 mm = 0.0394 inch. 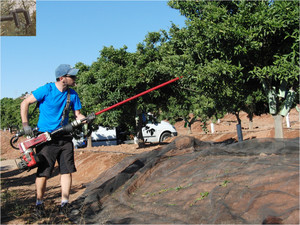 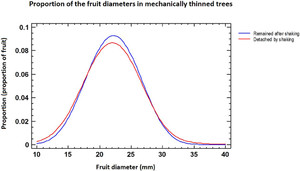