Survey of Pest Management Practices on US Golf Courses

An estimated 14,145 golf facilities exist in the United States totaling ∼1 million irrigated acres of turfgrass (Shaddox et al. 2022). Golf courses contribute ∼$21 billion in output impact to the US economy (Haydu et al. 2018). The performance expectations of golf course turfgrass often requires use of pest management practices to maintain aesthetics and playability (Held and Potter 2012). Because pesticide use increases maintenance costs and may influence environmental risk, it is essential that IPM practices are regularly assessed and evaluated.

The first known comprehensive survey assessment of pest management on US golf facilities was conducted in 2007 by Lyman et al. (2012) and was repeated in 2016 (Gelernter et al. 2016). These surveys indicated that reliance on nonpesticide pest management practices increased from 2007 to 2015, whereas reliance on conventional pesticides declined over the same period. Among the nonpesticide management practices, improving turfgrass health, monitoring weather, and scouting for damage were used at 97% of US golf facilities and were the most frequent practices among 18-hole golf facilities in 2015 (Gelernter et al. 2016). Evidence provided by Lyman et al. (2012) and Gelernter et al. (2016) have proven to play a critical role in education and advocacy programs (McKeel 2021).

Before application, pesticides are commonly stored and mixed in a concentrated form. Improper storage and/or handling of these concentrated forms poses a potential risk of point-source pollution. To address this concern, many golf facilities store and mix pesticides in dedicated locations designed to contain the pesticide until application (Gelernter et al. 2016); however, storage and mixing facilities do not exist on all golf facilities. Thus, to measure progression, it is essential that the presence and attributes of storage and mixing facilities are periodically documented.

The survey instrument (Supplemental Fig. 1) contained identical questions as previously used by Gelernter et al. (2016). The instrument was distributed in English via online software (Qualtrics, Provo, UT, USA). A link to the survey was sent via e-mail using the mailing lists of the National Golf Foundation and the Golf Course Superintendents Association of America (GCSAA), which resulted in the link being sent to 14,033 unique golf facilities. A golf facility was defined as a business where golf could be played on one or more golf courses. The survey and the instrument link were also promoted on social media by staff of GCSAA. The survey was available for completion for 7 consecutive weeks beginning on 1 Apr 2022. Five e-mail reminders were sent to encourage survey participation as well as survey completion by respondents who had started but not completed the survey. Respondents remained anonymous within the data file by omitting their names and assigning a unique identification number. One response was allowed per golf course. Validation that a respondent was linked to a golf facility was determined by cross-referencing the information contained in the National Golf Foundation database (i.e., golf facility name, facility type, number of holes, and location) with the answers provided by the respondent on those same criteria. Data were merged with data from the same survey conducted in 2006 and 2014 to allow for a measurement of change over time. Responses were received from 1444 facilities (Fig. 1), which represented 10.1% of the known total of US golf facilities.

To provide a valid representation of US golf courses, data were weighted. Responses were categorized into one of 35 categories depending on the facility type (public or private), number of holes (9, 18, or 27+), and public green fee (<$55 or ≥$55) (Supplemental Table 1). The weights were calculated by determining the proportion of each group within the total survey response. Reliance on pesticides was calculated by determining the difference between respondents who answered “increased” with respondents who answered “decreased.”

Golf course superintendents reported an increase in their reliance on pesticides from 2015 to 2021 (Fig. 2). Reliance on fungicides, herbicides, and insecticides increased between 2015 and 2021 to 9%, 8%, and 5% of golf facilities, respectively. Reliance on plant-growth regulators remained consistent (∼45%) with 2015 and reliance on biocontrol products (such as polyoxin D, phosphites, and corn gluten meal) declined from 25% to 14% between 2015 and 2021. The greatest increase in pesticide reliance in the 3 years before each survey occurred with nematicides. Before 2008, the nematicide fenamiphos was considered an industry standard for the treatment of nematodes in turfgrass (Crow et al. 2005); however, the sale and distribution of fenamiphos was prohibited in the turf and ornamental market in 2008 and existing stocks of fenamiphos were prohibited from use in 2014 (Keigwin 2011). These restrictions likely resulted in reliance on nematicides decreasing by 15% in 2015. From 2015 to 2021, new a.i. (such as abamectin and fluopyram) have been documented to control nematodes and result in increased turfgrass quality (Crow 2020). Thus, it is likely the increased reliance on nematicides measured from 2015 to 2021 is a result of new nematicides in the turfgrass market.

The pest management practices that golf course superintendents rely on the most were plant growth regulators (PGRs) and biological control practices, although reliance on biological control practices declined by nearly 50% from 2015 to 2021. Plant growth regulators have been shown to suppress weeds (Beam and Askew 2017), suppress seed head production (Peppers et al. 2020), and occasionally reduce disease severity (Inguagiato et al. 2010). Many PGRs are naturally occurring and possess a nontoxic mode of action (i.e., gibberellins, indole-3-butyric acid, and ethylene) and, thus, are not classified as conventional pesticides but rather biological pesticides by the US Environmental Protection Agency (Reilly et al. 2002). As such, PGRs are generally considered less toxic than conventional pesticides. The nontoxic mode of action along with application scheduling via the use of predictive models (Reasor et al. 2018) may have contributed to the consistent reliance on PGRs from 2015 to 2021.

Frequency of US golf facilities that responded that they use the listed pest management practice sometimes or frequently in 2007, 2015, and 2021. 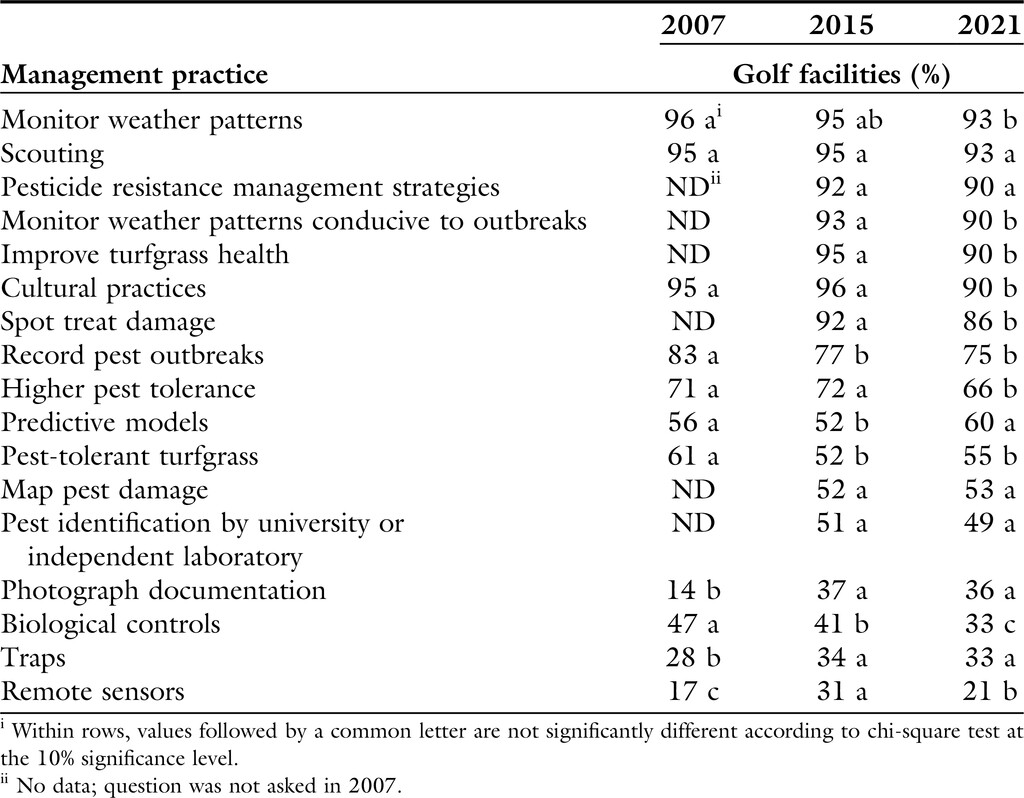 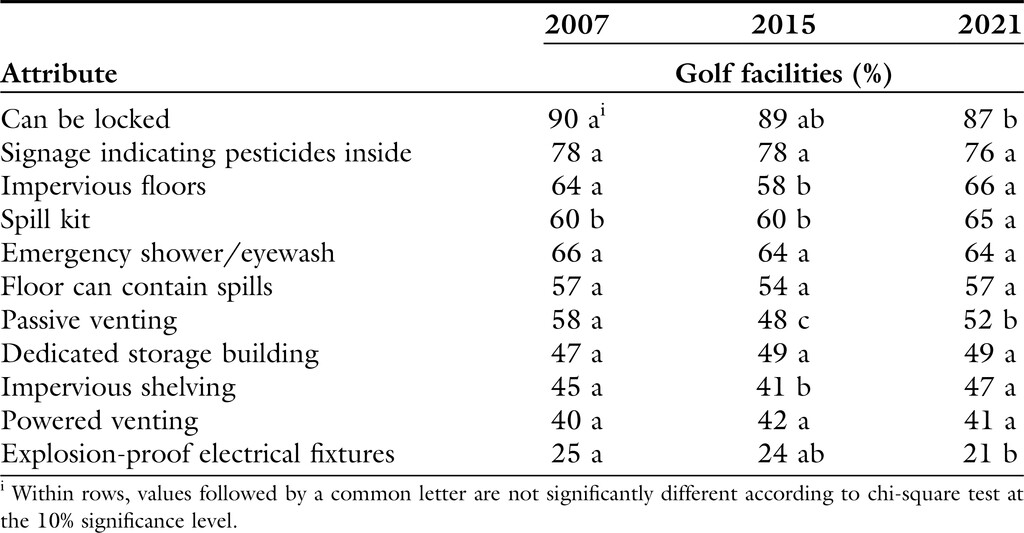 Survey distribution and the seven agronomic regions of the United States.

Frequency of written pest management plans on US golf facilities in 2021 as influenced by the facility’s annual budget. Bars with a common letter are not significantly different according to chi-square test at the 10% significance level; IPM = integrated pest management, PA = pesticide application. 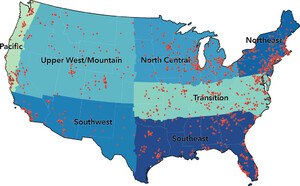 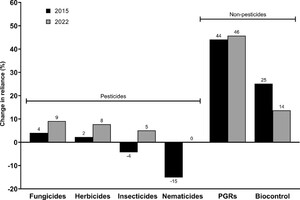 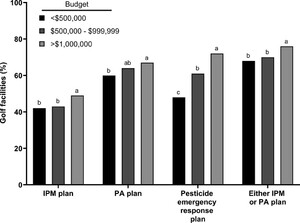 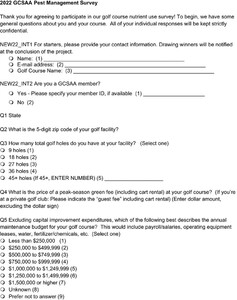 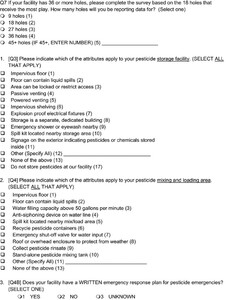 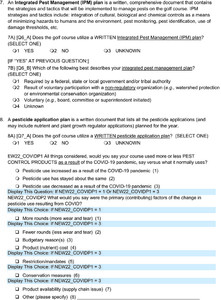 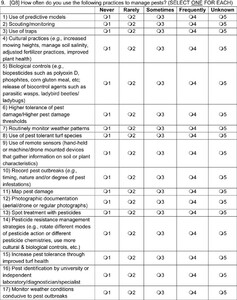 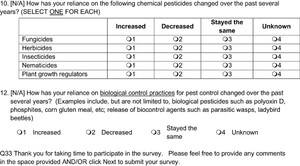 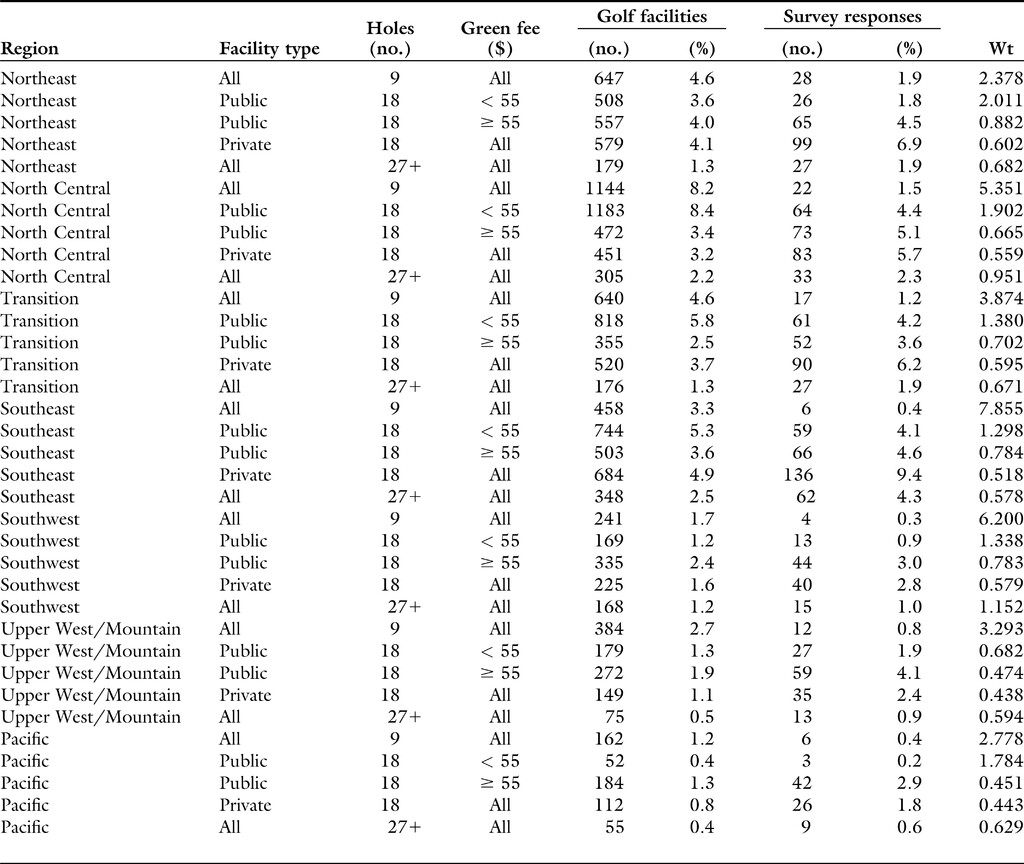