On 22 Mar. 2019, terminal cuttings of buffaloberry were collected from the Utah State University (USU) Greenville Research Farm (North Logan, UT). The cuttings were propagated following the protocol of Chen et al. (2020). On 10 June, buffaloberry rooted cuttings were transplanted into 1-gal injection-molded polypropylene containers (PC1D-4; Nursery Supplies, Orange, CA) filled with a soilless substrate (Metro-Mix 820; Sun Gro Horticulture, Agawam, MA). Plants were irrigated with tap water (pH, 7.89) before the experiment. All plants were grown in the USU Research Greenhouse (Logan, UT) at a temperature of 25/20 °C day/night. Light intensities were recorded hourly using a heated silicon chip pyranometer (SP-230, Apogee Instruments) mounted to a weather station at the Greenville Research Farm, about 1000 m away from the greenhouse. A light transmission rate of 68% was used when calculating the daily light integral (DLI) inside the greenhouse, and the DLI was 16.8 ± 2.5 mol⋅m–2⋅d–1 (mean ± sd) during the experiment. Supplemental light was provided using 1000-W high-pressure sodium lamps (Hydrofarm, Petaluma, CA) from 0600 to 2200 hr. Lamps were turned on at an average intensity of 130 ± 18 µmol⋅m–2⋅s–1 (mean ± sd) at the plant canopy level when the greenhouse light intensity was less than 544 µmol⋅m–2⋅s–1.

On 24 Oct., 15 uniform plants were sorted into three groups. Relative leaf chlorophyll content was similar among the three groups, as confirmed using a SPAD-502 chlorophyll meter. From 24 Oct. to 20 Nov., 1 L N-free Utah Monocot/Dicot solution (Bugbee, 2004) with 0 mm (zero N), 2 mm (medium N), or 4 mm (ample N) added ammonium nitrate (NH4NO3) at pH 7.5 was applied manually every other day to each plant in its corresponding treatment.

Before the N treatment, leaf chlorophyll content of buffaloberry was measured using an MC-100 chlorophyll meter. Fifteen mature leaves were sampled randomly from 15 buffaloberry plants. Ten measurements were recorded on each leaf, and the mean value was calculated. The cv (sd ÷ mean) was computed according to Parry et al. (2014) to study the uniformity of chlorophyll within a single leaf.

Transmission of red and NIR light

Chlorophyll extraction was conducted on 20 Nov. following the protocol for determining absolute chlorophyll concentration (Parry et al., 2014). Three leaves of each plant were sampled from the top one-third or the bottom one-third of the main shoot. A disk from each leaf was sampled using a #5 cork borer with an area of 78.5 mm2. Three leaf disks sampled from the same shoot position and the same plant were placed in a vial with 5 mL 99.7% dimethyl sulfoxide (DMSO) (Fisher Scientific, Hampton, NH) and incubated in water at 65 °C for 2 h. All leaf disks became transparent after all chlorophylls were extracted in the solution. A 3-mL aliquot was transferred to an optical-grade analysis cell for measuring light absorbance at 649.1 and 665.1 nm (Wellburn, 1994) using a spectrophotometer (ultraviolet-2401PC; Shimadzu Corp., Kyoto, Japan) with a resolution of 0.1 nm. Chlorophyll a and b concentrations were calculated using the equation for DMSO and for 0.1- to 0.5-nm spectral resolution (Wellburn, 1994). In addition, the chlorophyll a and b concentrations for the top and bottom of the main shoot were averaged.

An analysis of variance was performed to test the effects of NH4NO3 on leaf chlorophyll content. Mean separation among treatments was adjusted using the Tukey-Kramer method for multiplicity at α = 0.05. Regression analyses were conducted for relative chlorophyll contents measured using optical meters and NDVI sensors. All statistical analyses were performed using the PROC Mixed procedure in SAS Studio 3.8 (SAS Institute, Cary, NC).

Leaves of buffaloberry treated with zero N had a lower transmitted NIR light than those with ample N (Table 3). This indicates that leaves from plants with zero N absorbed or reflected more NIR light than the plants fertilized with N. Leaves of buffaloberry are covered with trichomes (Sriladda et al., 2016), and the trichome density might increase at a lower N treatment, leading to greater absorbance and reflectance of NIR light. In addition to chlorophyll, other plant pigments and structures can affect red absorption and thus interfere with measurements of chlorophyll indices that are solely based on transmitted red light. Therefore, transmitted NIR light is used as a reference wavelength in dual-wavelength measurements to correct the effects of nonchlorophyll absorbance (Monje and Bugbee, 1992). In our study, a significant positive correlation was found between ChlNDVI and readings of optical chlorophyll meters under either solar radiation or halogen lights (Fig. 6), which indicates that the ChlNDVI measured with NDVI sensors can provide a reliable estimate of leaf chlorophyll content under sunlight and electric light that contain red and NIR light. The correlation between ChlNDVI, and SPAD and CCI was stronger under sunlight (all r2 > 0.70) than under halogen lights (r2 = 0.65 and 0.56). This might be associated with the fact that sunlight during our measurement had greater levels of red and NIR radiation. Nevertheless, compared with the optical chlorophyll content meters containing built-in LEDs that provide constant red and NIR radiation, a limitation of using NDVI sensors to evaluate chlorophyll content might be that the sensitivity is proportional to incident red and NIR light intensities. Under most circumstances, sunlight is easily accessible and provides high amounts of red and NIR light for reliable measurements.

Sensors with red light/far-red light detection are becoming widely used (Kusuma and Bugbee, 2021). With the addition of a micro data logger (microCache, Apogee Instruments) featuring wireless connection to mobile devices, these sensors are easier to use. Because our research proved the concept that chlorophyll content can be estimated using an NDVI sensor, researchers can create a sensor with red and NIR light detection, allowing growers to estimate chlorophyll content to improve plant growth and nutrient status in greenhouse production.

Sensors with dual detectors, such as NDVI sensors, are widely used in remote-sensing and controlled environmental studies. Our research showed that transmitted red light or ChlNDVI (calculated based on the ratio of transmitted NIR and red light) recorded by the NDVI sensor could be used to detect the difference in leaf chlorophyll contents of buffaloberry under halogen light and sunlight with consistent results compared with SPAD and CCI measurements. Therefore, a sensor with dual detectors (red and NIR light) can provide a reliable, nondestructive method for evaluating relative chlorophyll content. Also, the NDVI sensor used in this study has a narrow measurement area that is helpful for recording data on plants with small leaves. Moreover, sunlight can be used as a reliable and easily accessible light source. Our research proved the concept that a sensor that is similar to the red/far-red light sensor with red and NIR light detection could be developed to help growers estimate chlorophyll content and adjust fertilizer applications to improve plant growth and nutrient status. 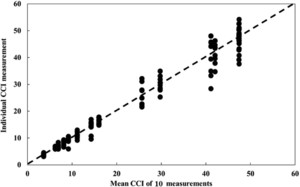 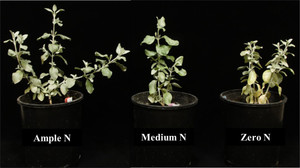 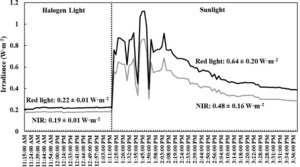 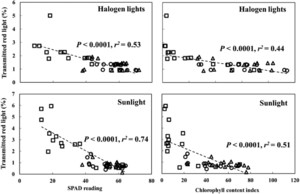 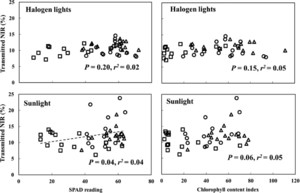 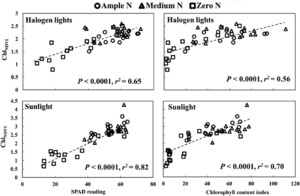