Substrate Type and Temperature on Germination Parameters of Butterfly Pea

Search for other papers by S. Christopher Marble in
ASHS
Google Scholar
PubMedClose

Originated in the Asian tropics, butterfly pea (Clitoria ternatea) is an herbaceous, perennial, leguminous twiner that has become naturalized in the East and West Indies, South and Central Americas, India, and China (Barik et al., 2007; Morris, 2009; Park and Knox, 2016). Flowers are deep blue to purple; when dried, butterfly pea flower extract can be used as a traditional food colorant with a longer shelf life and greater ease of use than synthetic blue colorants (Siti Azima et al., 2017). Recent health concerns associated with the consumption of synthetic food colorants (Chu et al., 2016; McCann et al., 2007) will likely further popularize the use of butterfly pea in food and beverage preparation, especially in the United States, where recent increased interest in this plant and its applications have already been documented (Simonson, 2016).

Soilless substrate is commonly a mix of organic and inorganic components blended for a particular use or application, and commercial plant production often relies on germination blends or mixtures containing high proportions of peat or coir to facilitate high water retention characteristics. An alternative substrate, rockwool is primarily composed of basaltic rock heated to ≈1600 °F and then spun to create a fibrous mass. Use of rockwool in commercial plant production operations has increased in recent years through the expansion of countries importing rockwool, an increase in the number of crops grown in rockwool, and through the development of a wider range of products containing rockwool (Bussell and McKennie, 2004). This has multiple advantages over soil-based substrates, primarily in the sterility, consistency, and water- and nutrient-holding capacities of the substrate. High temperatures required to manufacture rockwool render it biologically inert and, therefore, free from potential weeds, pests, and diseases that might normally hinder germination. This manufacturing process also renders a very consistent substrate that possesses an ideal air-to-water ratio for horticultural production, especially for seed germination (Allaire et al., 2005).

Butterfly pea is a heavy seeder, with between 6 and 3400 total seeds per plant produced from an assay of 19 varying accessions of butterfly pea. This high seeding rate has led to germination from seed as the primary method of propagation for butterfly pea (Fig. 1) (Morris, 2009). High levels of plant-available water are important for butterfly pea seedlings, with the literature recommending field seeding following a rainfall event (650–1250 mm) and when the possibility for subsequent rain is likely (Collins and Grundy, 2005). More accurately, Das et al. (2017) determined that the inherent moisture content of butterfly pea seeds is 6.8%; although that can be altered to between 5% and 12% with no negative effects, germinability was maximized at 10% seed moisture content. This is often accomplished through scarification or compromise of the seedcoat. Nagar and Meena (2015) found that either physical (abrasion with sandpaper) or chemical (soaking in sulfuric acid) scarification methods can increase germination by 70.5% compared to that of a control (Makasana et al., 2016).

Research examining the influence of temperature on germination success has been evaluated for butterfly pea; however, conflicting observations of the optimal germination temperature (To) appear in the literature. Selvamaleeswaran et al. (2011) found that exposing butterfly pea seed to temperatures of 16, 28, 30, and 35 °C resulted in germinability rates of 56%, 60%, 65%, and 20%, indicating a peak To of 30 °C and a drastic reduction in germination at 35 °C. This reduction was likely caused by thermo-inhibition, or the inability of seeds to germinate at high temperatures. Similarly, McDonald (2002) evaluated butterfly pea seed germination at temperatures between 8 and 44 °C, with peak germination between 24 and 28 °C and a rapid decrease in germinability above or below that range. Thermoinhibition was again observed at the highest imposed temperature treatments (≥40 °C). The mean germination rate followed a similar trend, increasing proportionally with an increased substrate temperature from 8 to 28 °C, maximizing at To of 32 °C, and then declining between 36 to 40 °C. Differences in observations reported by Selvamaleeswaran et al. (2011) and McDonald (2002) were likely caused by their use of cotton and paper, respectively, as germination media.

Three different trials were performed using the same experimental design: one each per week across the span of 3 weeks beginning on 17 Sept. and ending on 8 Oct. 2018. For each trial, 216 butterfly pea seeds were harvested from a single plant grown in a 100- × 48-ft gutter-connected greenhouse with 30% light-reducing polycarbonate paneling located in Apopka, FL (lat. 28.64°N, long. 81.55°W). On 17 Sept., 24 Sept., and 1 Oct., day 0 for each experimental trial, seeds for each trial were scarified mechanically using a razor blade according to the procedure described by Mackay et al. (2001) before being soaked in deionized water (DI) water for 24 h.

Two different substrate types were used for the experiment: soilless substrate mix (30% pine bark, 48% peat, 10% perlite, and 12% vermiculite; Fafard 4P; Sun Gro Horticulture, Agawam, MA) and rockwool (Grodan, Roermond, The Netherlands). On 18 Sept., 25 Sept., and 2 Oct., day 1 for each experimental trial, three 36-count soilless substrate plug trays were made by cutting 72-count plug trays (1.5 inches long × 1.5 inches wide × 2.25 inches high) in half. The trays were then filled with soilless substrate, and each plug was seeded with a single scarified and soaked butterfly pea seed ≈0.25 inch under the soils surface. Three 36-count rockwool cube sheets were also prepared by cutting 98-count rockwool cube sheets (1.5 inch3), soaking them for 30 min in water adjusted to pH 5.5 using a pH down buffering solution (General Hydroponics, Sebastopol, CA), and then seeding with the scarified and soaked butterfly pea seeds. The six substrate sheets were placed in a propagation unit located within a laboratory environment.

The propagation unit used in this experiment consisted of a multitier shelfed structure (Compact SunLite 3-Tier Garden; Gardener’s Supply Co., Burlington, VT), with each of the three shelves equipped with a 7.5-inch vented humidity dome (HydroFarm, Petaluma, CA), a 10- × 20.75-inch heat mat (Vivosun, Shanghai, China), fluorescent lighting (T5; Sunblaster, Langley, BC, Canada), and a mini thermo-hygrometer (Mondi, Vancouver, BC, Canada) to measure environmental conditions within each dome. A digital thermohygrometer (AcuRite, Lake Geneva, WI) was placed on the exterior of the propagation unit to record ambient environmental conditions, with mean temperatures and humidity of 73 °F (56%) and 73 °F (55.5%), respectively, for trials 2 and 3 (data for trial 1 were unavailable). Heating mats were programmed to maintain substrate temperatures of 70, 80, and 90 °F for the three experimental substrate temperature treatments imposed in the study. Top and side vents of the humidity domes were fully closed to maintain a constant humidity level. Lights were positioned ≈2 inches from the top of the dome, providing illumination between 55 and 90 µmol·m−2·s−1 at the outer corners and the center of the substrate sheet, respectively, throughout the duration of the experiment. Each of the six substrate sheets had ≈25 mL of water applied daily using a laboratory wash bottle (Thermo Fisher Scientific, Waltham, MA).

The experiment was organized as a 2 × 3 factorial in a completely randomized design, with substrate type and substrate temperature assigned as independent variables. Three replicates were cultivated for each treatment combination, one per experimental trial. Substrate temperature, vented humidity dome interior temperature and humidity (percent), and ambient laboratory temperature and humidity (percent) were recorded daily for the portions of trial 1 (20–23 Sept.), trial 2 (26 Sept.–1 Oct.), and trial 3 (3–8 Oct.) when germination was occurring (Table 1). Germination parameters were analyzed based on a collected response and then reported as percentages; a restricted maximum likelihood mixed model analysis was performed using the data collected from the 36 germinated seeds per experimental trial (JMP® Pro 14; SAS Institute, Cary, NC) with post hoc mean separation tests performed using Tukey’s honest significant difference test and a germination trial with variance within treatment combination replicates defined as the random error term. Statistical tests were considered significant if P ≤ 0.05.

Four of the six germination parameters (G, MT, cvt, and MR) were optimized when seeds were germinated in rockwool, with more consistent germinability when compared with those germinated in soilless substrate. Our results indicate that rockwool is a superior germination media compared to the soilless substrate mix for butterfly pea seeds, likely due to superior porosity and water-holding capacity of the rockwool, more consistency due to its manufacturing process, a lack of competitive organisms, or a combination of the three factors (Allaire et al., 2005). This also supports the conclusions of Collins and Grundy (2005) that butterfly pea requires high levels of available water during germination and seedling stages.

This is consistent with To values presented in the literature. McDonald (2002) concluded that the To was between 24 and 28 °C, with G declining drastically at sub-optimal or supra-optimal temperatures. Although our observed To is lower than values reported by McDonald (2002), the temperature at which thermo-inhibition occurred was similar. Differences in To values between studies were likely due to the differences in substrates used; McDonald relied on moist seed-test filter paper in 9-cm petri dishes to achieve germination. In their review, Olle et al. (2012) determined that when Grodan rockwool is saturated and then allowed to drain completely by gravitational pull, the remaining slab will contain 5% rockwool fibers, 15% pore space, and 80% water. The authors concluded that this ratio of water, or nutrient solution, to air promotes vigorous root growth.

Although faster germination and, therefore, lowered MT are often desired to reduce production time in commercial plant cultivation operations, this can lead to uneven or restricted emergence and a lack of cultivation consistency. Because uniformity is a high priority, the results suggest commercial germination of butterfly pea is maximized when the rockwool substrate is used at a substrate temperature of ≈70 °F. This is further confirmed by G values for the substrate temperature × substrate type interaction effects, where the 70 °F rockwool, 80 °F rockwool, and 70 °F soilless substrate treatment combinations exhibited the highest numbers of viable germinated seeds at 98%, 92%, and 87%, respectively. Although substrate temperature and type were both shown to significantly influence the germination success of butterfly pea, the influence of other commercial production parameters not evaluated in this study may be important. 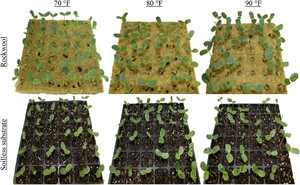 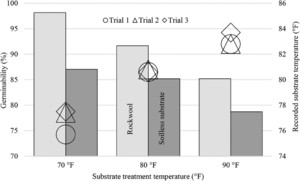