Impact of Information Type and Source on Pollinator-friendly Plant Purchasing

Pollinators play an integral part in the reproductive process of 75% to 95% of all flowering plants (Ollerton et al., 2011; U.S. Fish and Wildlife Service, 2019a), but the world has seen a substantial reduction in the abundance of pollinators (Pollinator Health Task Force, 2015). Many of the world’s fruits and vegetables are dependent on pollinators, so the reduction in pollinators has the potential to inflict considerable economic damage to both the United States and the rest of the world. Of the leading 57 single crops, 39 of them are dependent to some degree upon pollinators, with the production volume of these 39 crops representing 35% of global food production (Klein et al., 2007). It is estimated that pollinators contribute between 5% and 8% of market value to annual global crop production, which equated to between $235 billion and $577 billion in 2015 dollars (Potts et al., 2017). In the United States, it is estimated that pollinators contribute $20 billion to $40 billion to agriculture production (Calderone, 2012; Wildlife Habitat Council, 2005). Honey bees (Apis mellifera), in particular, account for $10 billion to $20 billion (Calderone, 2012).

Although some pollinators have declined steeply over time, other pollinators have experienced weak declines to even increasing abundance (Bartomeus et al., 2013). However, the decline of bees (Apis sp.) in some areas has affected both unmanaged wild bees and commercially managed domesticated bees. Recently, the rusty-patched bumble bee (Bombus affinis) was added to the endangered species list. This marks the first time a bee has been added to the endangered species list (U.S. Fish and Wildlife Service, 2019b). The decline of domesticated honeybee colonies has seen the number of managed colonies decreasing from a little more than 4 million in 1980 to just more than 2.5 million in 2015 (Pollinator Health Task Force, 2015). This decrease has resulted in changes to U.S. regulatory policy—notably, the relaxing of the prohibition of honeybees and honeybee genetic material imports into the United States to meet demand for pollinators (Federal Register, 2004).

As agricultural producers look to ensure pollinators are accessible to pollinate their crops, researchers are working to understand the loss in pollinators. As noted by the Pollinator Partnership (Johnson, 2010), from the 1990s to the mid 2000s, colony losses averaged ≈18% per year. However, from 2006 to 2014, the average colony losses were ≈30% (van Engelsdorp et al., 2014). Most of the hypothesized theories for pollinator decline have focused on causes such as the loss of native habits, pesticides, diseases, weather, and parasites as significant contributing factors to the general decline of pollinators (Johnson and Corn, 2015; National Academies Press, 2007).

As pollinator issues have come to the forefront, many consumers and activists have advocated for the removal of commonly used pesticides, such as neonicotinoids, from producer use. Retail outlets, including Home Depot (Atlanta, GA) and Lowes (Morresville, NC), have banned their suppliers from using neonicotinoids on plants to be sold in their stores (Bose and Orr, 2015; Home Depot, 2016). Furthermore, the state of Maryland banned consumer use of pesticides that contain neonicotinoids starting in 2018 (Wood, 2016).

As noted by Blacquière et al. (2012) and Decourtye and Devillers (2010) in their literature reviews on the effects of neonicotinoids, there is no concrete evidence that correct use of neonicotinoids are the main cause of pollinator decline. However, consumers face a barrage of information from various groups (e.g., media, activists, universities) that often contain conflicting messages about the impact of pesticides on pollinator decline. The decision about which sources to trust can be difficult. Often, the level of trust an individual consumer has about a news source and/or type of information (neutral or negative) is conditionally dependent upon characteristics such as age, income, and political party affiliation (McCluskey et al., 2016; Mitchell et al., 2016).

In Summer 2016, an internal review board approved (#X15-129) an online survey to be administered in Connecticut. Potential respondents were asked to participate via e-mail from the database of Global Market Insight, Inc. (Lightspeed Research, Warren, NJ) with respondents choosing to participate directed to the study. As a result of the funding agency’s interest in the Connecticut market, respondents were limited to the state of Connecticut. Furthermore, the survey was restricted to respondents 18 years old or older, with women being oversampled because they have been shown to be the primary shoppers in a majority of households (Flagg et al., 2013; Wolfe, 2013; Zepeda, 2009). Around 1200 respondents completed the survey, but because only respondents indicating they had a lawn or landscape were asked the pollinator-friendly plant purchasing questions, the final analysis included 785 respondents.

The overall online survey tended to be representative of the average Connecticut resident (Table 1). The median age for Connecticut is 40 years of age, with 46 years the median age of the survey sample (U.S. Census Bureau, 2015). The difference in age is largely a result of the sample excluding respondents younger than the age of 18 years whereas the Connecticut estimation includes persons younger than 18 years of age. Household median income of the sample was $75,000, whereas the Connecticut median household income is $70,000 (U.S. Census Bureau, 2011). To this end, the results are generalizable outside of the survey sample only as much as the sample represents the overall views and perceptions of the population as a whole. Although we cannot guarantee that the sample is generalizable, we have a range of demographics, political affiliations, and so on, that give some indication that the sample results can be generalized within and outside of Connecticut.

Descriptive statistics of respondents for a 2016 pollinator-friendly plant purchasing survey of Connecticut residents.

There are several ways the impact of information type and information source on pollinator-friendly plant decision making can be measured. Common approaches include revealed preference (e.g., discrete choice analysis, eye tracking, biometric tools.) and stated preference (e.g., contingent valuation). Although revealed preference studies may mimic real-world decision making more accurately, we used the stated preference approach in this study. The stated preference format was used for two reasons: 1) ease of use and 2) comparison of treatments more than magnitude of treatment. With respect to ease of use, only one question was required to identify the impact of a treatment compared with multiple questions needed for most revealed preference experiments. Also, given we were interested in treatment comparisons and not the magnitude, potential biases associated with stated preference surveys would not be as problematic, given the impact of the biases would be canceled out as a result of the random nature of treatment assignment. For instance, if survey respondents inflated their likeliness to purchase a pollinator-friendly plant, then this inflation would be distributed randomly across treatments, implying the treatment comparisons should not be biased, although the likeliness values would be biased. 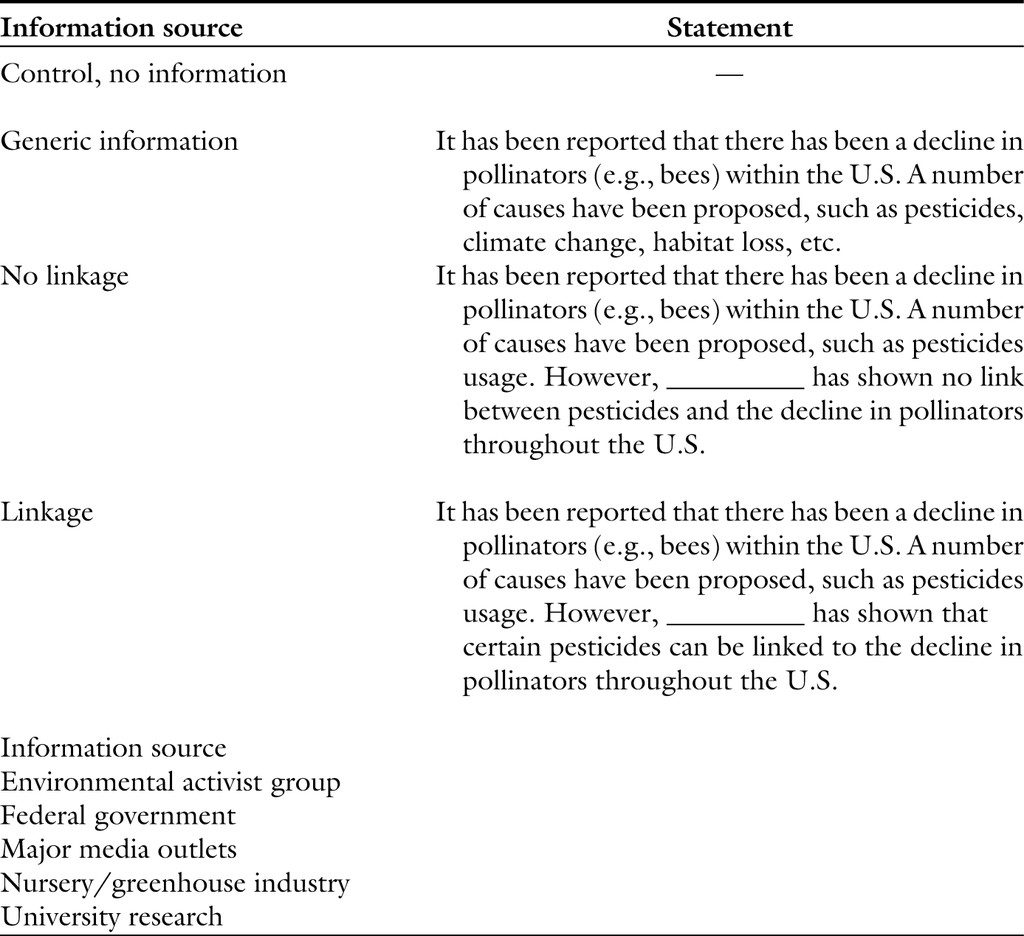 As respondents started the survey, they were assigned randomly to one of the treatment groups. This equates to ≈65 respondents in each of the 12 treatment groups. After reading the message associated with the treatment, respondents were asked “What is the likelihood that you will purchase more pollinator-friendly plants for your home landscape during the next year?” Respondents answered the question via marking their likelihood on a continuous line scale, where 0 is extremely unlikely, 50 is neither likely/unlikely, and 100 is extremely likely.

About 3% and 9% of the sample were censored on the left (at 0) or right (at 100) on the 100-point scale. Failure to account for the censored nature of the data can result in biased results. Thereby, censoring was accounted for within the data by using the two-limit Tobit model developed by Rossett and Nelson (1975). The model can be represented aswhere is a latent variable that is not observed at values less than zero or values greater than 100, x is a matrix of explanatory variables, β is a vector of coefficients, and ε is an independently and normally distributed error term with zero mean and variance σ2. The x matrix of explanatory variables included demographics, political affiliation, urbanicity, and percent of pollinator-friendly plants in the respondent’s landscape, as well as treatment indicators. Political affiliation and urbanicity were included to control for respondent views on pesticides and regulations so that the treatment group impacts could be isolated. To obtain the coefficient, estimates were maximized using the likelihood function in Eq. [2] (Davidson and McKinnon 1993):

Means and sds associated with varying treatments from a 2016 pollinator-friendly plant purchasing survey of Connecticut residents. 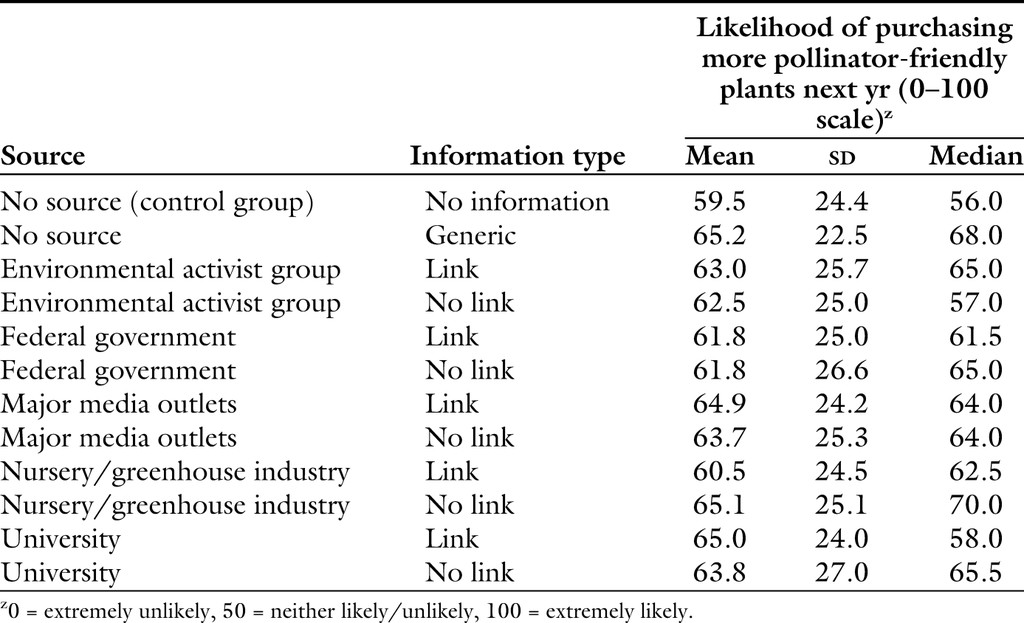 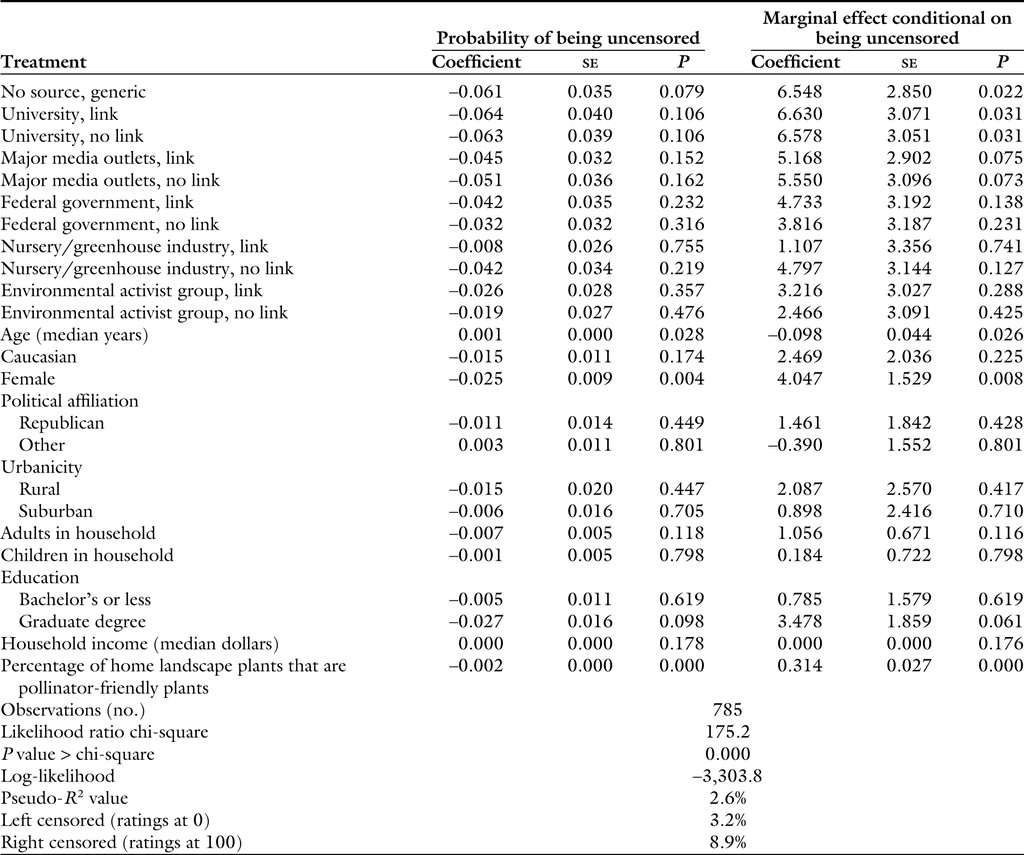 With respect to treatments, the no source–generic information treatment increased the average respondent’s score by 6.5% compared with the control group (no information) (Table 4). This implies that bringing consumer attention to decreasing pollinator numbers can influence the decision-making process of consumers even when no direct cause or source of information is provided. Furthermore, an informational message from a university source with either information linking or not linking pesticides to pollinator decline resulted in a 6.6% and 6.6% increase in likelihood, respectively. A major media outlets message linking and not linking pesticides to pollinator decline also generated a 5.2% and 5.6% increase, respectively. However, information either linking or not linking pesticides to pollinator decline from the federal government, nursery/greenhouses, and environmental activists had no difference compared with the control (no source and no information). This result is not wholly surprising given that nurseries/greenhouses and environmental activists could be considered biased sources. However, the lack of significance of federal government coefficients is interesting. This result could be the result of numerous reasons, such as not trusting federal information because the government may be thought of as having an agenda to respondents being inundated with environmental information from the federal government, thereby diluting the impact of pollinator-specific information.

There are several limitations to the study and areas for future research. With respect to limitations, the study was conducted using Connecticut consumers only, implying results are only generalizable to other areas in so much as Connecticut consumers are guided by the same purchasing processes as other populations. Furthermore, using specific industry associations, major media outlets, universities, and/or activist groups could potentially lead to different results than the more generalized results found by using sources that are more generic (e.g., universities instead of specific universities) in nature. As for future work, examining the impact of specific sources and varying the types of information could help firms have a more in-depth understanding of how information and sources impact their customer base.