Turfgrass managers routinely use mowers and other machinery that operate hydraulic implements to maintain turfgrass surfaces and surrounding landscapes. These hydraulic implements rely on highly pressurized fluids to move various components and activate motors on equipment. Not unlike other pieces of equipment, hydraulic implements have the capability to malfunction or break down during operation. When this happens, highly pressurized and hot hydraulic fluid has the potential to leak or spill onto the turfgrass. Most conventional hydraulic fluids are phytotoxic to turfgrass and, if the leak is not detected and turf not immediately remediated, can create extensive turfgrass necrosis (Johns and Beard, 1979).

Conventional petroleum-based hydraulic fluids leaks often result in rapid phytotoxic effects on turfgrass. Reports have noted drying and curling of leaves that darken in color immediately after a spill, with leaf chlorosis taking place within 24 h on ‘Tifgreen’ hybrid bermudagrass (Cynodon dactylon × C. transvaalensis) (Elliott and Prevatte, 1995; Johns and Beard, 1979). Complete necrosis to all aboveground plant tissue has been observed within 48 h, and residual effects in the soil are reported to impact turfgrass performance from 4 months to 1 year after the spill (Bai and Li, 2013; Elliott and Prevatte, 1995). In addition, Berndt et al. (2018a) documented significant reductions in visual green color for the first 3 d after a petroleum-based hydraulic fluid spill on a ‘TifEagle’ hybrid bermudagrass putting green using digital image analysis. After 3 d, the turf appeared fully necrotic and there were no further significant reductions in visual green color.

During the early 1990s, vegetable-based oils for hydraulic fluids were developed as an environmentally safe and nontoxic alternative to petroleum-based fluids (Cheng et al., 1991). When tested on turfgrass, both petroleum- and vegetable-based fluids resulted in complete leaf necrosis. However, the rate of necrosis was much slower on turfgrass applied with the vegetable hydraulic fluid, occurring 7 d after application compared with petroleum hydraulic fluid producing full necrosis after 2 d (Elliott and Prevatte, 1995). No differences in percent turf recovery were observed, but chlorosis as a result of petroleum-based fluid remaining in the soil for a longer period was still evident more than 1 year later. Berndt et al. (2018b) provided further confirmation when simulated spills resulted in significantly greater injury area for petroleum-based fluid compared with a vegetable oil-based fluid over a 139-d period. Nonlinear regression modeling and simulation of these data predicted full recovery after 494 and 303 d for petroleum and vegetable oil hydraulic fluids, respectively.

In addition, posthydraulic spill remediation practices are important in limiting turfgrass phytotoxicity and necrosis, and accelerating recovery. Powell (1981) evaluated various methods of remediation practices after spills on a ‘Penncross’ creeping bentgrass putting green that included various detergents soaps, activated charcoal, and calcined clay. A diluted detergent applied to the turfgrass immediately after spill, scrubbed in, and rinsed thoroughly was the recommended practice to promote the quickest recovery (Powell, 1981). In a separate study on ‘Tifgreen’ hybrid bermudagrass, a granular detergent drenched to form suds and then rinsed off provided 90% recovery within 4 weeks, whereas activated charcoal and calcined clays achieved 25% and 15% recovery, respectively (Johns and Beard, 1979). However, visual observations have indicated that high concentrations and quantities of detergent soap could cause phytotoxicity to the turf, exacerbating phytotoxicity even further (Berndt, 2018). Berndt et al. (2017) used nonlinear regression modeling of the hydraulic fluid injury area to demonstrate that a water rinse after spill reduced healing time from 224 to 65 d from spill of a synthetic polyalkylene glycol fluid on a ‘TifEagle’ hybrid bermudagrass green. However, the water rinse treatment was not effective for petroleum and vegetable hydraulic fluid spills, with a healing time longer than 400 d regardless of whether rinse treatment was applied. If synthetic hydraulic fluids are to become widely adapted for use in the turfgrass industry, additional evaluation of remediation methods after synthetic hydraulic fluid spills on cool-season turfgrass is needed to develop best management practices to limit turfgrass injury and promote recovery.

Therefore the objectives of this study were 1) to compare the phytotoxic effects of four hydraulic fluids of different types when applied to a creeping bentgrass putting green and 2) to determine the influence of postapplication remediation treatments on reducing injury.

This trial was conducted during the 2010 and 2011 growing seasons on a mature ‘Penn A-4’ creeping bentgrass modified, sand-based, root-zone putting green at the Joseph E. Valentine Turfgrass Research Center in University Park, PA. The trial was initiated on 29 Aug. and concluded 26 Sept. 2011, and was repeated from 27 Aug. to 24 Sept. 2012. Soil physical properties of the putting green were a sandy loam with a pH of 7.1 and 1.8% organic matter. Mowing was performed six times weekly at 3.1 mm.

Each hydraulic fluid treatment was subjected to three postapplication remediation treatments. The three remediation treatments included RO, SBR, and no remediation (untreated control) applied within 12 min after application. RO treatments were applied to the fluid spill with a carbon dioxide backpack sprayer at 50 psi equipped with a single flat-fan nozzle (TP8015E; TeeJet, Wheaton, IL) and delivered a total of 8.5 L water to each spill area. For SBR treatments, 333 mL of 5% soapy detergent water (Ajax Dish Liquid; Colgate-Palmolive Co., New York, NY) was applied along the fluid spill as described previously and then was scrubbed in with a stiff-bristled brush perpendicular to the fluid spill. This process was repeated until 2 L of the detergent soap–water solution had been applied to the turfgrass, at which point a 6.5-L water rinse was applied.

Ambient temperature, relative humidity, and wind speed were recorded at the time of application using a handheld weather meter (Kestrel 3000; Nielsen-Kellerman, Boothwyn, PA). Turfgrass injury was evaluated on 0 to 5 scale, where 0 = no visible turfgrass injury, 2 = minimal acceptable injury, and 5 = brown or dead turfgrass. Evaluations of turfgrass injury were evaluated 3, 7, 14, 21, and 28 DAT. 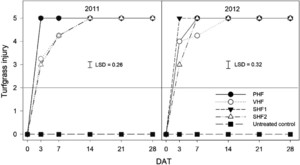 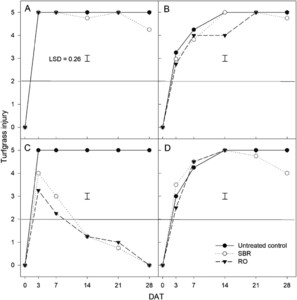 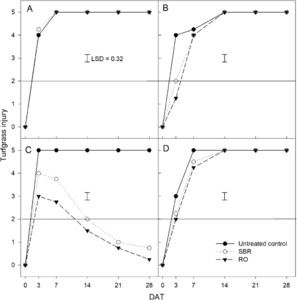