Search for other papers by Diane M. Narem in
ASHS
Google Scholar
PubMedClose

Prairie dropseed, a warm-season prairie bunchgrass, is native from Saskatchewan to Quebec and Massachusetts, south to Georgia, west to New Mexico and Montana (U.S. Department of Agriculture, 2019). New York and Ohio list prairie dropseed as threatened and five states list it as endangered: Connecticut, Kentucky, Maryland, North Carolina, and Pennsylvania (U.S. Department of Agriculture, 2019). Prairie dropseed is larval food for six species of butterflies/moths (Lepidoptera), including the federally listed endangered poweshiek skipperling (Oarisma poweshiek) and threatened dakota skipper (Hesperia dacotae) (Narem and Meyer, 2017). Prairie dropseed can be an important addition to managed landscapes because of its bunch growth habit, dense fibrous root system, medium size, and attractive, fragrant flowers. Seed or vegetative propagation and growth of prairie dropseed is slow (Diboll, 1997; Fedewa and Stewart, 2011; Schramm, 1978). Germination has not been reported to be more than 53% (Greene and Curtis, 1950), making it a challenge for commercial production.

Cold dry (Nuzzo, 1978; Prairie Moon Nursery, 2019) or cold moist (equal parts moistened seed and vermiculite) (Blessman et al., 2001), as well as either cold dry or cold moist has been recommended for this species (Prairie Nursery, 2019; Steffen, 1997). However, Rock (1977) indicated this species needs no treatment before germination. Greene and Curtis (1950) concluded prairie dropseed had no benefit to cold stratification. Fedewa and Stewart (2009) found no more than 50% germination, and no significant difference using cold moist, cold dry, and lighting treatments. In the literature, only Greene and Curtis (1950) and Fedewa and Stewart (2009) conducted experiments and reported germination percentage results. Other citations made general comments or recommendations, but did not report actual experimental results to substantiate their recommendations.

An informal e-mail survey in 2018 of nine grass growers in the United States revealed that two used cold, moist stratification (3–4 weeks at 38 to 45 °F), but seven growers used cold, dry storage before germination (M.H. Meyer, unpublished data). All growers stressed the importance of pure seed and using seed that was 1 or 2 years old, but acknowledged quality and germination vary annually. Oversowing seed, using 3 to 5 or even 12 to 15 seeds per plug cell is common (M.H. Meyer, unpublished data).

All treatments were conducted at the Plant Growth Facilities at the University of Minnesota, St Paul (lat. 44°58′N, long. 93°14′W). Seeds were purchased from two commercial sources in Oct. 2017 with germination and purity information (Table 1). In Feb. 2018, this seed was tested in a commercial laboratory [Minnesota Crop Improvement Association (MNCIA), St. Paul, MN] for germination, purity, and tetrazolium staining (Table 1). All seeds were held in cold (40 °F), dry storage from Oct. 2017 through Mar. 2018, before the following six treatments were administered. Treatments took place from Jan. through Mar. 2018.

Results from two seed testing laboratories for two commercial sources of prairie dropseed used in experiments in 2018 at the University of Minnesota.

For germination treatments 1, 2, and 3, seeds were removed from 40 °F cold, dry storage and were sown in 128-cell (individual cell volume, 14 mL) propagation trays (T.O. Plastics, Clearwater, MN) with moistened germination mix (Sun Gro Horticulture, Agawam, MA). Two seeds (uncovered) were placed in each cell. For treatment 1, germination mix warm, seeds were lightly covered with medium-grade vermiculite (Sun Gro Horticulture), irrigated with a gentle mist of tap water not to dislodge the seeds, and placed in a 75 °F glass-glazed greenhouse with intermittent mist (5 s mist every 8 min) and 600-W high-pressure sodium lighting (Gavita, Vancouver, WA; GE Lighting, Cleveland, OH) with a 16-h daylength. For treatment 2, germination mix cold, after seed placement, the trays were lightly covered with clear, 6-mm plastic to avoid drying and were placed in a 40 °F refrigerator for 4 weeks. Upon removal, seeds were lightly covered with medium-grade vermiculite, irrigated, and placed in the greenhouse conditions as described for treatment 1. For treatment 3, germination mix 34 °F, before placing seeds on the germination mix, 2.3 g seed was placed in a 3.0-inch-long × 7.7-inch-wide × 3.8-inch-high double-seal plastic bag (Ziploc; S.C. Johnson, Racine, WI) and moistened with 2.5 mL deionized water, then sealed and stored at 34 °F. Moisture amounts were based on the work of Schramm (1978). Seeds were aerated weekly (bags opened and ventilated for 10 to 15 min), and additional moisture of 1 to 2 mL was added if seeds were completely dry. After 4 weeks, seeds were sown as described for treatment 1 and were placed in the same greenhouse growing conditions. Two hundred fifty-six seeds from both sources were planted for one replicate. Treatments 1 and 2 were replicated three times; treatment 3 was replicated twice.

Germination counts began at 7 d and continued for 4 weeks. Germination was defined as the visible emergence of plumule and radicle. Seedling counts were concluded after 4 weeks for all treatments (Table 2). Transplantable was defined as a healthy seedling large enough to handle (≈1 inch long).

Mean number and percentage of germinated and transplantable seedlings from six seed treatments of prairie dropseed at the University of Minnesota in 2018. 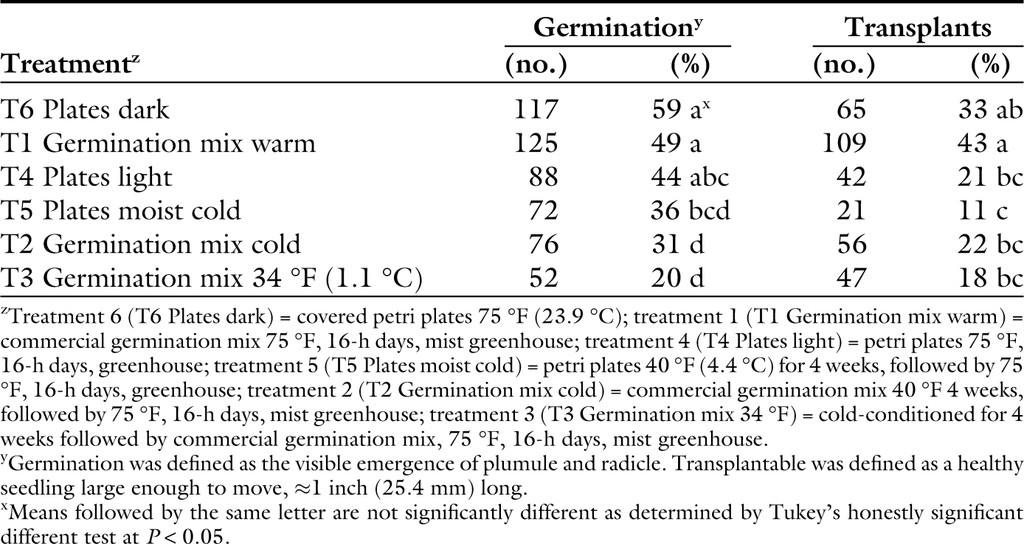 The commercial seeds purchased and used in these experiments came with viability and germination information, along with testing dates (Table 1). Both seed companies verified that they used a third-party independent laboratory to determine these results (B. Carter and N. Diboll, personal communication). Because viability and germination were high (>90%) it appeared the seeds were suitable for these experiments. When the initial germination results were quite low, especially for one seed source, another laboratory (MNCIA) performed viability and germination tests about 8 months later than original testing dates. Viability reported from MNCIA was high, although germination was lower (Table 1). According to MNCIA-registered seed technologists, viability standards used in tetrazolium staining are sometimes not accurate in showing truly viable seed, yet they meet the standards set for staining that are determined to be live tissue (C. Mowry, personal communication). Any indication of staining in the endosperm, and various levels of stain, are used as indicators of viability and, in this example of prairie dropseed, it appears that although some viable tissue was within the seed, it was not enough for germination and growth.

We investigated six germination treatments using two commercial sources of prairie dropseed seed to develop recommendations for commercial growers to increase germination rates of this North American native prairie species. We found tetrazolium staining results from commercial laboratories did not correspond to germination rates and may not be a reliable means to report or determine seed germination for prairie dropseed. We recommend growers use fresh seed, store it in 40 °F cold dry conditions, sow in germination mix covered with medium-grade vermiculite, irrigate with a gentle mist of tap water, and place seed trays in a 75 °F greenhouse with intermittent mist and a 16-h daylength.