Illustrated example of the mental rotations test (Vandenberg and Kuse, 1978). Each item of this 20-item questionnaire included two questions. A score of 1 was given for correctly answering both questions for each item. Total test time was 10 min.

Test materials used for the shaping creativity test and examples of works produced by students. The test used yellow palm, veitch’s screw pine, and tree fern as materials for planar, linear, and amorphous floriculture works, respectively. The time limit for using each material was 10 min. For each floriculture material, shaping creativity and shaping techniques were evaluated by two floricultural experts. 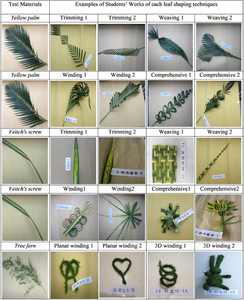