Influence of mulch type and mulch depth on the herbicide effect observed in large crabgrass (treated with prodiamine) and garden spurge (treated with dimethenamid-P + pendimethalin). Herbicide effect is the percent increase in control with the herbicide + mulch combination in comparison with control achieved with mulch-only treatments and is calculated by using the formula: [(percent control combination − percent control mulch) ÷ percent control mulch] × 100. Means followed by the same letter within each species and mulch depth are not significantly different based on Fisher’s protected least significant difference (P ≤ 0.05); NA* = not analyzed because of zero variance; 1 inch = 2.54 cm. 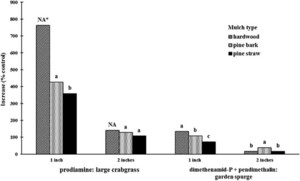