Search for other papers by Andrew R. Kniss in
Google ScholarClose

Creeping bellflower (Campanula rapunculoides) is a difficult to manage weed commonly found in turfgrass and residential areas. We evaluated the efficacy of selected postemergence herbicides (glyphosate, dicamba, clopyralid, quinclorac, and triclopyr) on greenhouse-grown creeping bellflower. The experiment was conducted in Jan. 2016 and repeated in Sept. 2016. Each herbicide was applied at five rates plus a nontreated control. Clopyralid caused greater creeping bellflower biomass reduction and mortality than the other herbicides investigated. The herbicide dose required to cause 50% mortality was lowest for clopyralid [86–138 g·ha−1 acid equivalent (a.e.)] compared with dicamba (221–536 g·ha−1 a.e.), glyphosate (196–678 g·ha−1 a.e.), triclopyr (236–782 g·ha−1 a.e.), and quinclorac (>3000 g·ha−1 a.e.). Clopyralid could be an effective herbicide for managing creeping bellflower, although it is currently not registered for use in many habitats where this plant is a problematic weed.

The genus Campanula is composed of a diverse group of perennial, biennial, and annual species that are distributed across temperate and higher elevation subtropical regions (Rosatti, 1986). A limited number of bellflower (Campanula) species are cultivated for their attractive bell-shaped flowers that have a variety of ornamental uses (Seglie et al., 2012). Creeping bellflower is a creeping perennial native to Eurasia that is widely naturalized in North America growing in turfgrass, gardens, roadsides, and wooded areas (Rosatti, 1986; U.S. Department of Agriculture, 2017). Many of the same traits that make it a desirable, low-maintenance ornamental plant make it a vigorous weed problem once it escapes cultivation (Whitson, 2012). This rhizomatous, low-growing herb has heart-shaped, toothed leaves that produce flowering racemes, each containing from 20 to 100 flowers (Good-Avila and Stephenson, 2003; Vogler and Stephenson, 2001). Racemes can produce 3000 to 15,000 seeds annually (Royer and Dickinson, 1999) with subsequent germination rates greater than 60% (Good-Avila and Stephenson, 2003).

Creeping bellflower has long been considered an aggressive turfgrass and pasture weed in the United States (Stevens, 1966), but the relative contribution of sexual and asexual reproduction to this species’ competitiveness is unknown. The floral reproductive biology of creeping bellflower is well studied because of transient self-incompatibility in which the stigmas of the flowers exhibit plastic incompatibility that changes over time (Vogler and Stephenson, 2001). Levels of self-incompatibility are influenced by genetic and environmental factors that result in variable self-fertilization rates in natural populations (Good-Avila et al., 2003). The contribution of seed production and vegetative growth to this species’ success is thus likely influenced by access to suitable pollen and environmental factors. Asexual reproduction may play an important role in turfgrass or hayfields that receive frequent mowing whereas plants growing in undisturbed areas may exhibit varying degrees of sexual and asexual reproduction.

Herbicides are important tools for weed control in turfgrass and other areas and can be particularly effective when used in combination with cultural and mechanical control practices (DiTomaso, 2000; Grube et al., 2011). Of the herbicides labeled for weed control in turfgrass and residential areas, synthetic auxins and glyphosate are used most frequently (Grube et al., 2011). Numerous extension bulletins in the United States provide general recommendations for chemical control of creeping bellflower but only a few contain herbicide efficacy information (Callihan and Old, 1990; Moechnig et al., 2007; Panke et al., 2012). Where efficacy information is included, there is some inconsistency among publications, and in all cases, it is unclear if recommendations are based on experimental data, personal experience, or general knowledge of herbicide chemistry. For example, Panke et al. (2012) report that labeled rates of dicamba or picloram can provide control of creeping bellflower, but Moechnig et al. (2007) report that commercially available synthetic auxin herbicides only provide suppression. Considering the widespread distribution and creeping growth habit, selective herbicides need to be identified that minimize regrowth and vegetative spread. The objective of this study was to examine the efficacy of glyphosate and synthetic auxin herbicides on greenhouse-grown creeping bellflower.

Greenhouse studies were conducted in 2016 at the University of Wyoming Laramie Research and Extension Center, Laramie, to evaluate the efficacy of selected herbicides on creeping bellflower. In May 2015, ≈1 m of creeping bellflower rhizome was dug from a large infestation in the corresponding author’s front lawn in Laramie, WY. Rhizome segments were planted into twenty 2-L pots filled with potting medium (BM Custom Blend; Berger, Saint-Modeste, QC, Canada) and placed in the greenhouse to increase root and rhizome biomass for 8 months. Rhizomes were then dug from the large pots, and cut into 8-cm segments and planted on 5 Jan. 2016 (Expt. 1). Remaining rhizomes were replanted into 2-L pots again and allowed to continue growing until the process was repeated on 15 Sept. 2016 (Expt. 2). For both experiments, the rhizomes were planted into 0.9-L pots filled with potting medium (BM Custom Blend) and watered twice daily. No fertilizer was applied. Day and night temperatures were maintained at 22 and 20 °C, respectively. A supplemental light (Sun System; Sunlight Supply, Vancouver, WA) was used to extend the photoperiod (16 h light and 8 h dark) throughout the experiments.

In both experiments, five different rates of glyphosate (Roundup Weathermax; Monsanto Company, St. Louis, MO), dicamba (Clarity; BASF Corp., Durham, NC), clopyralid (Stinger; Dow AgroSciences, Indianapolis, IN), quinclorac (Facet L and Facet 75 DF, BASF Corp.), and triclopyr (Garlon 3A, Dow AgroSciences) were used (Table 1). Each herbicide was applied with the label recommended adjuvant (Table 1). A nontreated control was also included (Table 1). Because of the high efficacy of clopyralid and low efficacy of quinclorac in Expt. 1, rates of clopyralid were reduced and rates of quinclorac increased in Expt. 2. In addition, a liquid formulation of quinclorac (Facet L) was used in Expt. 2 instead of the dry formulation (Facet 75 DF) used in Expt. 1. Each herbicide rate was replicated five times in a completely randomized design in each study. Plants were treated at an average height of 5 cm, which corresponded to 23 and 20 d after planting in Expts. 1 and 2, respectively. Treatments were applied when plants were 5 cm in height to simulate plants growing in mowed turfgrass.

Nonlinear regression analysis was used to quantify the effect of each herbicide on creeping bellflower dry matter production after clipping and probability of regrowth after clipping. For dry matter production, a three-parameter log-logistic model was used (Eq. [1]), where Y is dry matter of aboveground biomass regrowth in grams, d is the upper limit asymptote, X is the rate of the herbicide applied in grams acid equivalent per hectare, e is the value of X at the inflection point of the curve, and b is the slope of the curve at e (Seefeldt et al., 1995).

Creeping bellflower was effectively controlled under greenhouse conditions at high rates of all herbicides evaluated except for quinclorac. Quinclorac was not effective for creeping bellflower control, although the increased dose improved suppression in Expt. 2 (Table 2). Herbicide LD50 and GR50 were generally less in Expt. 2, as were the estimated standard errors. The greater LD50 and GR50 estimates observed in Expt. 1 could be due to reduced light quantity and quality when the experiment was conducted (January for Expt. 1 vs. September for Expt. 2). In both experiments, LD50 estimates were greater than GR50 estimates, with GR50 estimates often less than half the LD50 estimates. This is expected, because a greater amount of herbicide is required to kill plants than to reduce growth. 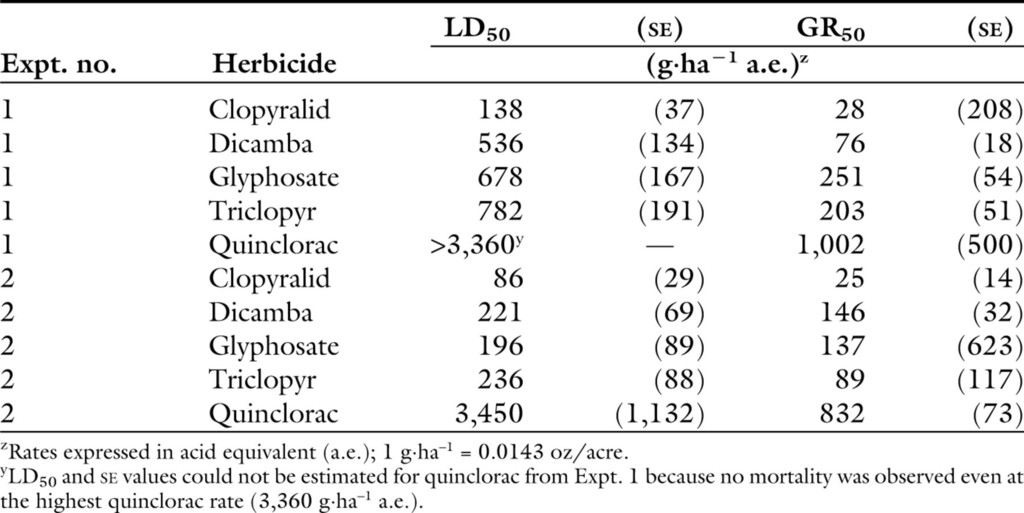 Clopyralid was the most effective herbicide tested as evidenced by the lowest LD50 and GR50 in both experiments (Table 2; Fig. 1). Estimated LD90 of clopyralid was within the recommended rate range for perennial weed control (Table 3). In Expt. 1, clopyralid LD50 values were 74% to 82% less than dicamba, glyphosate, and triclopyr. Reducing the clopyralid doses in Expt. 2 resulted in a better characterization of creeping bellflower response, which resulted in more accurate estimates of LD50 and GR50. Clopyralid LD50 values were 56% to 64% lower than dicamba, glyphosate, and triclopyr in the second study.

Herbicide doses required to cause 90% control (LD90) of creeping bellflower under greenhouse conditions and the recommended rate on herbicide label for perennial weed control.

Moechnig et al. (2007) reported that triclopyr provides suppression of creeping bellflower but not effective control. Although triclopyr resulted in injury symptoms such as curled leaves and generally lower rates were required to reduce growth (GR50), greater rates were required to cause mortality compared with dicamba, glyphosate, or clopyralid (Table 2). Although LD90 estimates of triclopyr were within the range of recommended rates for perennial weed control (Table 3), the range of recommended rates is extremely wide because triclopyr is commonly used for woody shrub control. Thus, triclopyr might not be practical for controlling creeping bellflower in turfgrass, where recommended broadcast rates typically range from 0.5 to 1 lb/acre.

We acknowledge the limitations of this greenhouse research, because field results sometimes differ, especially with respect to the herbicide rates required to control a species. However, relative ranking between herbicides with respect to weed control efficacy tend to be similar between field and greenhouse studies. Although we did not evaluate the efficacy of mixtures of two or more active ingredients in this study, it is possible that mixtures could provide improved control of creeping bellflower. Testing the efficacy of active ingredient mixtures is particularly important in turfgrass weed management because products for turfgrass weed control are often a combination of several active ingredients (Raudenbush and Keeley, 2014). Future research should evaluate the efficacy of mixtures on field populations, especially those that have shown promising results in this study. In addition, evaluating the efficacy of these herbicides at different growth stages of creeping bellflower will be important for determining the optimal application timing. Clopyralid was consistently the most effective herbicide for controlling creeping bellflower and displays similar grass selectivity as other synthetic auxins such as dicamba and triclopyr. Despite selectivity and labeled use in permanent grass pastures, grasses grown for seed, turfgrass in specific areas, and non-cropland, clopyralid is not currently labeled for use in other areas where creeping bellflower is commonly found, such as residential areas. 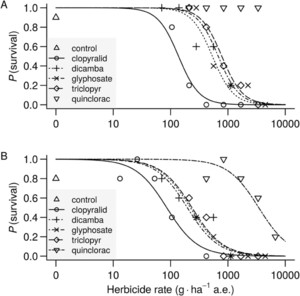 Search for other papers by Andrew R. Kniss in
Google ScholarClose