Sweetpotato is an important crop in the United States and was worth over $716 million in gross farm value in 2015 [U.S. Department of Agriculture (USDA), 2016a] with North Carolina, California, Mississippi, and Louisiana farmers planting over 89% of the production area (USDA, 2016b). North Carolina ranks number one in sweetpotato production in the United States with 87,000 acres planted ($332 million in gross farm value) in 2015, which accounts for more than half of the total acreage planted nationwide (USDA, 2016b). Sweetpotato transplant size and planting depth in production fields are important considerations because sweetpotato is vegetatively propagated by using nonrooted stem cuttings (also called transplants or slips) for commercial production. The size of sweetpotato transplants can vary considerably in sweetpotato propagation beds (A. Thornton, personal communication). When transplanted into production fields, transplant sizes can affect the yield and quality of sweetpotato storage roots. Most growers use 7- to 14-inch-long transplants (considered optimal size transplants) to plant production fields (Barkley et al., 2017; Smith et al., 2009). The sweetpotato cultivar Covington is unlike most other commercial cultivars as it has a growth habit in which the top canopy leaves are mostly at the same height, but the location of the apical meristem can vary from being close to the top of the leaf canopy to a few inches below. Because the apical meristem location can vary with respect to the top of the canopy, transplant sizes for this variety often vary when cut on the propagation bed (Barkley et al., 2017). ‘Covington’ is grown on 88% of the sweetpotato acreage in North Carolina (North Carolina Crop Improvement Association, 2014).

Environmental conditions such as precipitation and initial soil moisture have also been shown to be key components to transplant survival and root set in sweetpotato (Gajanayake et al., 2013; Meyers et al., 2017). Soil moisture stress during plant establishment can limit the initial growth and development of sweetpotato roots and eventually affect storage root yield (Indira and Kabeerathumma, 1988; Pardales and Esquibel, 1997). Sweetpotato are often grown on nonirrigated lands and have been considered drought-tolerant (Constantin et al., 1974), although the response to moisture stress varies with variety (Villareal et al., 1979). According to Nair (2000), storage root yield decreases if drought conditions exist in the initial 10–30 d after planting (DAP), which is the time period of storage root initiation. Edmond and Ammerman (1971) also reported reduced storage root yields if drought occurred within the first 6 weeks after planting.

Field studies were conducted in 2012 and 2013 at the Horticulture Crops Research Station, Clinton, NC (lat. 35.0243°N, long. 78.2827°W). The soil was a Norfolk fine sandy loam (fine-loamy, kaolinitic, thermic Typic Kandiudults) with humic matter less than 0.7% and pH 6.0. A complete set of transplant size and planting depth treatments were arranged in a randomized complete block design with four replications in nonirrigated and preplant irrigated plots. To ensure optimal soil moisture levels, irrigation of 0.5 acre-inch was applied to the preplant irrigated portion of the field 1 d before planting using a linear move system. Nonirrigation plots were placed on opposite sides within the same field with a border area of 10 rows (35 ft) between the plantings to ensure no water overspray from the irrigation event. Transplant size ranged from 3.0 to 4.5, 5.5 to 7, 8 to 9, and 9.5 to 12 inches (hereafter 3.7-, 6.3-, 8.5-, and 10.7-inch transplants, respectively). Transplants were measured from the base of the cut transplant to the tip of the growing point, and the number of nodes per transplant was counted. The average number of nodes per transplant was 4.9, 7.0, 8.2, and 9.8 for 3.7-, 6.3-, 8.5-, and 10.7-inch transplants, respectively. The planting depths of transplants were 2 and 6 inches beneath the soil surface, with 2 inches representing a shallow commercial planting depth and 6 inches being the average planting depth of a mechanical transplanter used by growers (A. Thornton, personal communication). Transplants were established in the plots with a 0.25-inch-diameter wooden dowel that was used to make holes that were sufficient in diameter to plant the transplants. A stake was attached either 2 or 6 inches from the base of the dowel rod and served as the base for the dowel rod. When the dowel rod is inserted into the soil, the stake would flush at the top of the soil, therefore ensuring that the soil depths were exactly 2 or 6 inches. In 2012 and 2013, the soil was dry, making it difficult to form holes in the nonirrigated portion of the field without soil in the holes falling in before getting the transplants planted. To alleviate this problem, a mechanical transplanter with no transplants was run over the top of the rows with the transplant water running continuously. The transplant water and packing wheels firmed the soil enough so that when planting holes were formed with dowels, soil did not fall back into the hole. This soil firmness allowed for the prescribed planting of the transplants at 2 or 6 inches, depending on the treatment. The planting dates were 20–21 June 2012 and 17 June 2013. Each plot was one 15-ft-long (12-inch-tall bed) row on 3.5-ft centers with 5-ft borders (front, back) between plots.

Once plants had been established, plant stands were recorded at 2–3 weeks after planting. Sweetpotato storage roots were harvested on 11–12 Oct. (114 DAP) and 18 Oct. (123 DAP) in 2012 and 2013, respectively. Storage roots from each plot were dug with a shovel by hand, collectively graded, and then counted and weighed. Storage roots were graded in accordance with the U.S. standards into no. 1 (diameter of 1.75–3.5 inches and length of 3–9 inches), canner (diameter 1–1.75 inches), jumbo (diameter > 3.5 inches), and culls (malformed, distorted, or diseased) (USDA, 2005). Marketable number and yield were calculated as the sum of no. 1, jumbo, and canner grades.

All data were checked for homogeneity of variance and normality. All the data were subjected to analysis of variance using the PROC GLIMMIX procedure of SAS (version 9.4; SAS Institute, Cary, NC) to test for treatment effects and interactions. Means were separated using Fisher’s protected least significant differences at P ≤ 0.05, when appropriate.

The results are presented separately for 2012 and 2013 because of the significant interactions of year by treatments and variations in environment each year. A key reason for variations between environments among years could be the higher amounts of rainfall in 2013 compared with 2012 (Fig. 2). Three-way interactions between irrigation × planting depth × transplant size were not observed for the percent plant stand, all grades of storage root numbers and yields during 2012 and 2013 (P > 0.05). Therefore, only significant two-way interactions and main effects are discussed further to explain the results.

Sweetpotato storage root numbers and plant stand in response to planting depth and transplant size at Clinton, NC, in 2012.

Sweetpotato storage root numbers and plant stand in response to irrigation and transplant size at Clinton, NC, in 2012.

The two-way interaction of planting depth × transplant size was significant for all storage root yield grades (P < 0.05). When planted at the 6-inch depth, yields of each grade were lower from 3.7-inch transplants than other size transplants, but this difference was not observed at the 2-inch planting depth (Table 3). At the 2-inch planting depth, cull yield was lower for 10.7-inch transplants than 6.3- and 8.5-inch transplants. The effect of irrigation was also significant. Higher yields of no. 1, canner, cull, marketable, and total storage roots occurred when preplant irrigation was applied [281, 54, 27, 484, and 511 bushels/acre, respectively (1 bushel = 50 lb)] compared with nonirrigation (172, 39, 11, 417, and 429 bushels/acre, respectively) (data not shown). The exception was jumbo grade yield as nonirrigation (207 bushels/acre) yielded more than preplant irrigation (149 bushels/acre) (data not shown).

Sweetpotato storage root yield in response to planting depth and transplant size at Clinton, NC, in 2012.

The interaction of planting depth × transplant size was significant for plant stand, marketable, and total storage root numbers (P < 0.05). Similar to the results in 2012, transplants ≥6.3 inches planted at 6 inches deep had higher plant stands and produced more marketable and total storage roots than 3.7-inch transplants (Table 4). However, this difference was not significant at the shallow planting depth of 2 inches.

Sweetpotato storage root number and plant stand in response to planting depth and transplant size at Clinton, NC, in 2013.

The growing seasons for our studies were variable and are representative of the challenges that every sweetpotato grower faces. Environmental conditions such as precipitation and initial soil moisture have been shown to be the key components for transplant survival and storage root set in sweetpotato (Gajanayake et al., 2013; Indira and Kabeerathumma, 1988; Pardales and Esquibel, 1997). The irrigation × transplant size interaction was an important factor for sweetpotato transplant survival and storage root numbers during both the years. The importance of selecting transplants ≥6.3 inches for sweetpotato plant stand and storage root number was mainly observed with nonirrigation or when soil conditions were drier at planting (Tables 3 and 6). However, sweetpotato yields were influenced by the use of irrigation in both the years, with higher yield observed with preplant irrigation than without. The impact of preplant irrigation on plant stand and cull, marketable, and total storage root numbers was significant in 2012, but not in 2013. In 2012, the beneficial response of preplant irrigation was likely because of the environmental conditions being less favorable at the time of planting as measurable rainfall did not occur until 5 DAP (Fig. 2). However, the 2013 study demonstrated that preplant irrigation did not play as much of a role in plant stand and marketable and total storage root numbers as rainfall was constant through most of the plant establishment and root initiation period, ≈13 DAP (Villordon et al., 2009). These results confirm previous research conducted by Lana and Peterson (1956) and Bowers et al. (1956) who found that sweetpotato yields were increased by irrigation up to 67%. An important difference between their studies and ours was that in their studies, irrigation was applied throughout the entire growing season, whereas the irrigation treatment in our study was applied only during plant establishment.

These results showed that longer transplants (≥6.3 inches) planted 6 inches deep have improved plant stand and produced greater numbers and yield of sweetpotato storage roots. The use of irrigation can be beneficial for overall yields and improving plant stands, especially if it is very hot and dry during plant establishment. The use of irrigation at planting when soil moisture is optimal may not be necessary. However, if soils are dry during the root initiation phase of plant establishment or if there are long periods of no rainfall during the season, preplant irrigation would be beneficial to overall yield.

Fingers of a commercial transplanter holding a sweetpotato transplant.

Rainfall from 0 to 16 d after sweetpotato planting at Clinton in 2012 and 2013. Rainfall data were collected from regional weather stations and provided by the State Climate Office in North Carolina; 1 mm = 0.0394 inch. 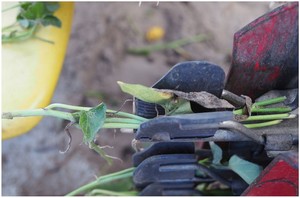 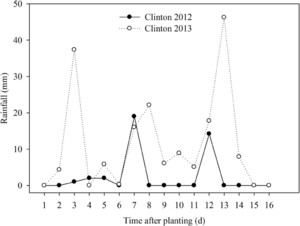