Complete resistance or immunity often is found in wild relatives of cultivated plants, which are used to develop resistant cultivars through hybridization and selection. Among many examples, closely related wild species are sources of resistance to Fusarium wilt in tomato [Solanum lycopersicum (Gonzalez-Cendales et al., 2016)], rusts in small grains (Miedaner and Korzun, 2012), and late blight resistance in potato [Solanum tuberosum (Fry, 2008)]. It is not known if wild and cultivated relatives of poinsettia are sources of resistance to pythium root rot, or if interspecific hybridization can offer increased resistance to pythium root rot. However, poinsettia breeding programs recently have incorporated interspecific hybrids of poinsettia and the uncultivated dogwood poinsettia (Euphorbia cornastra) or scarlet plume (Euphorbia fulgens) into commercial production lines (Ecke et al., 2004). These cultivars have been introduced primarily for their novel growth habits, which feature numerous, small, flat bracts. As with other poinsettia cultivars, information about their resistance or susceptibility to pythium root rot is lacking.

The isolate of P. aphanidermatum used in this study [PA1 (mefenoxam-sensitive)] was isolated from rotted poinsettia roots sampled from a plant growing in a commercial greenhouse in North Carolina. Previous research demonstrated that this isolate was highly aggressive on poinsettia (Lookabaugh et al., 2015). Inoculum was prepared by transferring four 4-mm-diameter agar disks from an actively growing culture into 125-mL flasks containing twice-autoclaved long-grain rice (25 g rice and 18 of mL deionized water). Cultures were incubated for 5 d at 25 °C (Holmes and Benson, 1994). Flasks were shaken twice daily to promote uniform colonization of rice grains and to prevent clumping.

Differences in poinsettia cultivar responses to pythium root rot caused by Pythium aphanidermatum in a trial conducted in 2014. 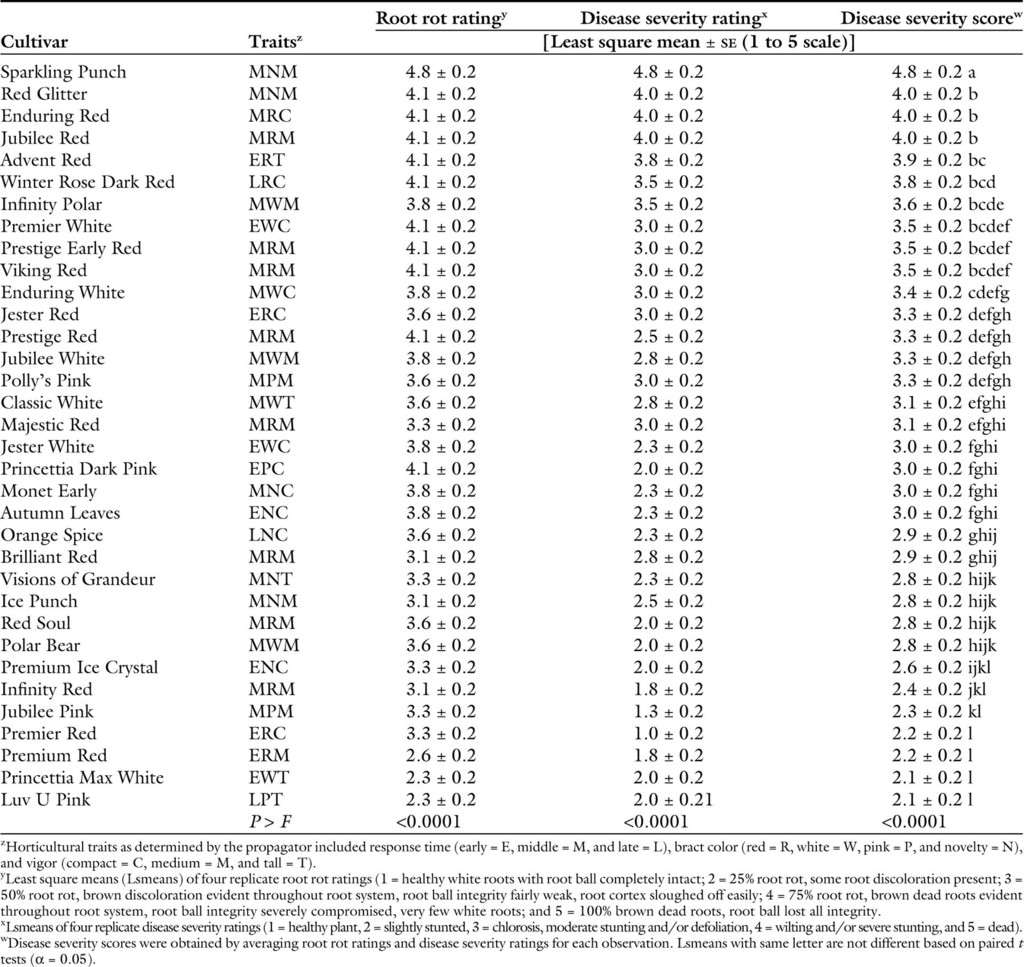 Differences in poinsettia cultivar responses to pythium root rot caused by Pythium aphanidermatum in a trial conducted in 2015. 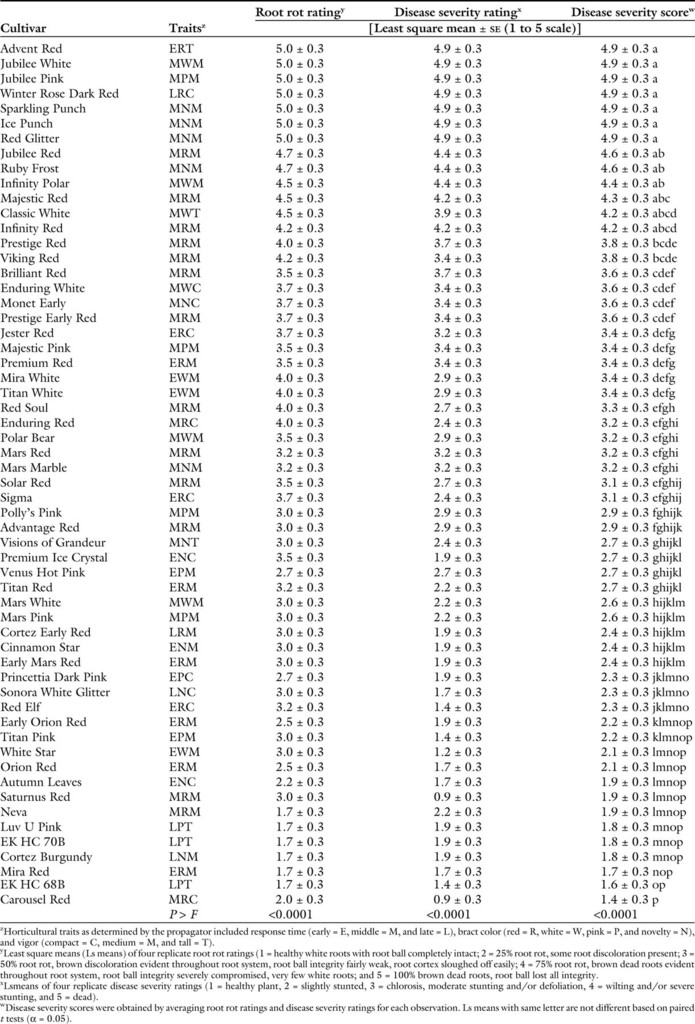 A subset of cuttings (n = 50) were assayed for pythium root rot to confirm clean propagative material for each year of the study. Roots were rinsed under running water, blotted dry, and cut into pieces. Three clumps of root pieces, ≈1 cm3 in volume, were plated on sterile agar [17 g·L−1 corn meal agar (CMA-P5ARP; Becton, Dickinson, and Co., Franklin Lakes, NJ)] amended with pimaricin, ampicillin, rifampicin (Sigma-Aldrich Co., St. Louis, MO), and PCNB (Terraclor 75% WP; Southern Ag Insecticides, Rubonia, FL) Jeffers and Martin, 1986) dispensed in 100 × 15-mm petri plates. Plates were incubated in the dark at room temperature for 24–72 h and evaluated for the presence or absence of Pythium-like colonies. No Pythium species were recovered in either year of the study.

Experimental plants were inoculated by placing six P. aphanidermatum colonized rice grains evenly in the potting media around the plant base (1 cm deep and 2.5 cm from the stem) about 3 weeks after transplanting. Four replicate plants were inoculated for each cultivar and non-inoculated plants were included as controls. A randomized complete block design with four blocks was used in each trial. Plants were fertilized with 5 g/pot of 14N–6.1P–13.3K slow-release fertilizer (Multicote 4; Haifa Chemicals, Haifa, Israel), maintained under drip irrigation, and exposed to natural light cycles. Substrate conditions were tested twice during each experiment. The pH ranged from 5.8 to 6.1, and soluble salts ranged from 2.9 to 4.0 mS·cm−1 (n = 5) using the pour thru method. To control whiteflies, plants were treated with 0.25 mL·L−1 dinotefuran (Safari; Valent USA Corp., Walnut Creek, CA) before inoculation. Experiment one was transplanted on 15 Aug. 2014 and evaluated on 23 Nov. 2014. Experiment two was transplanted 13 Aug. 2015 and evaluated 16 Nov. 2015. Plants were soft-pinched ≈3 weeks after inoculation.

Analysis of variance and correlation were performed using PROC GLIMMIX and PROC CORR procedures (SAS version 9.4; SAS Institute, Cary, NC). Cultivar was treated as a fixed effect and block was treated as a random effect. Least-square means (ls mean) were calculated for each cultivar to determine significant differences among cultivars (P < 0.05) and were separated using paired t tests where appropriate. Horticultural traits, including response time, vigor, and bract color, were used to group cultivars, and means were separated using paired t tests where appropriate. Contrasts were also performed to compare mean disease severity scores (DSS) of hybrid cultivars with traditional cultivars. Data from each year were analyzed separately.

Twenty-nine cultivars were represented in both 2014 and 2015. A separate analysis of variance was performed on cultivar data combined over years. Cultivar was treated as a fixed effect, whereas block and trial were considered random effects. Lsmeans were calculated for each cultivar to determine significant differences and were separated with paired t tests. Population quantiles and percentiles were computed using PROC UNIVARIATE.

All cultivars exhibited symptoms but disease severity varied by cultivar. Most cultivars exhibited severe root rot and above-ground symptomology, including severe stunting, foliar chlorosis, wilting, and defoliation (Table 1). The symptoms were so severe that these plants would not be suitable for sale. ‘Sparkling Punch’ was the least resistant (lsmean DSS = 4.8) with plant mortality in two replicate plants 8 d after inoculation (Fig. 1). Hybrid cultivars Princettia Max White and Luv U Pink had the lowest DSS (lsmean DSS = 2.1). These cultivars exhibited slight stunting and minor root damage. Some plants of ‘Princettia Max White’ and ‘Luv U Pink’ were asymptomatic, but P. aphanidermatum was readily isolated from roots. Asymptomatic plants or plants with minor above-ground symptoms probably could be sold, but if overlooked in production systems, they could harbor pathogen propagules and serve as a source of inoculum for more susceptible plants or subsequent crops.

Relationships among horticultural traits and resistance, 2014.

Cultivars were grouped by response time, color group, and vigor to analyze the association of partial resistance with these horticultural traits. Hybrid cultivars were not included in the analysis. No differences in DSS were observed across response time (P = 0.074), bract color (P = 0.335), or vigor groupings (P = 0.865) (data not shown).

Relationships among horticultural traits and resistance, 2015.

Relationships between horticultural traits of poinsettia and resistance to pythium root rot in 2015. 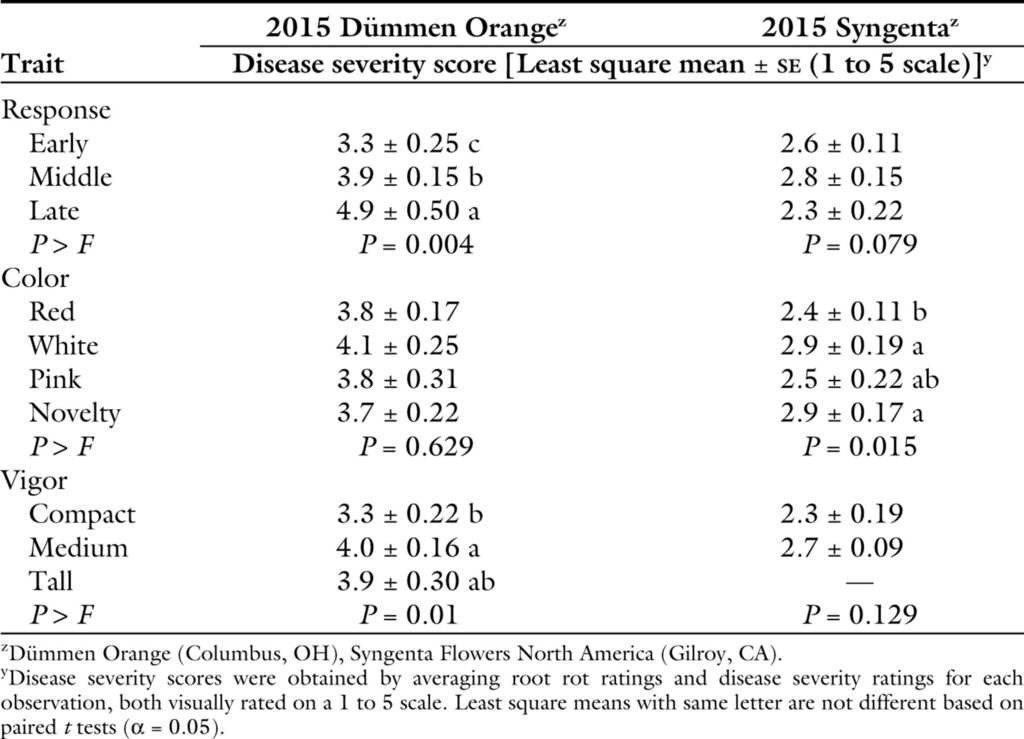 Among cultivars from Syngenta, significant differences were observed across bract color groups (P = 0.015), but not among response or vigor groups. White bract (n = 4) and novelty bract (n = 5) cultivars had the highest DSS (ls mean = 2.9) whereas red bract cultivars had the lowest DSS (ls mean = 2.4) (Table 3). Novelty and white cultivars often are the result of color sports or spontaneous mutations. Color sports often are genetically similar to their parental lines and can even revert back to their parental color, so it is unclear whether mutations associated with color affect mechanisms of disease susceptibility. Only two cultivars were represented from Beekenkamp and these were excluded from the trait analyses.

Poinsettia (Euphorbia) hybrids, including ‘Luv U Pink’, ‘Princettia Max White’, and two numbered cultivars, had the lowest DSS compared with conventional cultivars (Tables 1 and 2). In 2014, linear contrasts indicated that mean difference between hybrid and conventional cultivars was 0.76 ± 0.11 units (P < 0.001); in 2015, the mean difference was 1.37 ± 0.15 units (P < 0.001). Typical symptoms observed on hybrids were slight stunting and minimal root damage. These results suggest that hybrid cultivars may have higher levels of partial resistance to pythium root rot when compared with conventional cultivars. However, ‘Princettia Dark Pink’ had higher DSS in 2014 (Table 1) and 2015 (Table 2) than other hybrid cultivars. This cultivar exhibits a compact, mounding growth habit as opposed to the tall, vigorous growth habit associated with ‘Princettia Max White’, ‘Luv U Pink’, and the two numbered cultivars EK HC 68B and EK HC 70B. The parental lines of ‘Princettia Dark Pink’ and the ‘Luv U’ series may differ in levels of partial resistance.

Twenty-nine cultivars were represented in both 2014 and 2015. Disease severity scores for the two experiments were moderately correlated with relatively higher severity ratings overall in 2015 compared with 2014 [r = 0.44, P = 0.016 (Fig. 2)]. Two cultivars (Infinity Red and Jubilee Pink) had DSS that were notably different in 2015 compared with 2014. In 2014, ‘Infinity Red’ (DSS lsmean = 2.4) and ‘Jubilee Pink’ (DSS lsmean = 2.3) were not different from the best performing cultivars Luv U Pink and Princettia Max White (DSS lsmean = 2.1). However, in 2015, ‘Infinity Red’ (DSS lsmean = 4.2) and ‘Jubilee Pink’ (DSS lsmean = 4.9) were among cultivars with the highest DSS. The reasons for changes in response are not known, but these results illustrate the importance of repeating resistance evaluation experiments before making recommendations to breeders or growers. In addition, previous research has shown that high soluble salts can have significant effects on the incidence and severity of pythium root rot (Moorman, 1986; Moorman and Lease, 1997). These effects may result in differences in cultivar performance in facilities that use alternate fertilization protocols than those imposed here.

The combined ranking data were used to group cultivars by their performance in both years (Table 4). Based on least-square means separation, six cultivars (Sparkling Punch, Red Glitter, Advent Red, Winter Rose Dark Red, Jubilee Red, and Jubilee White) were among the least resistant to pythium root rot and belonged to the 75th percentile [quantile 3 (Q3)] for disease severity (Q3 = DSS 3.88–4.88). Planting these cultivars should be discouraged in facilities with recurring pythium root rot problems. Five cultivars (Luv U Pink, Autumn Leaves, Princettia Dark Pink, Premium Ice Crystal, and Visions of Grandeur) exhibited partial resistance to pythium root rot and were in the 25th percentile [quantile 1 (Q1)] of disease severity (Q1 = DSS 2.0–3.06). Pythium root rot on these cultivars may be easier to control with routine fungicide applications than cultivars with little to no partial resistance. These cultivars also could serve as resistant checks in future screening trials. 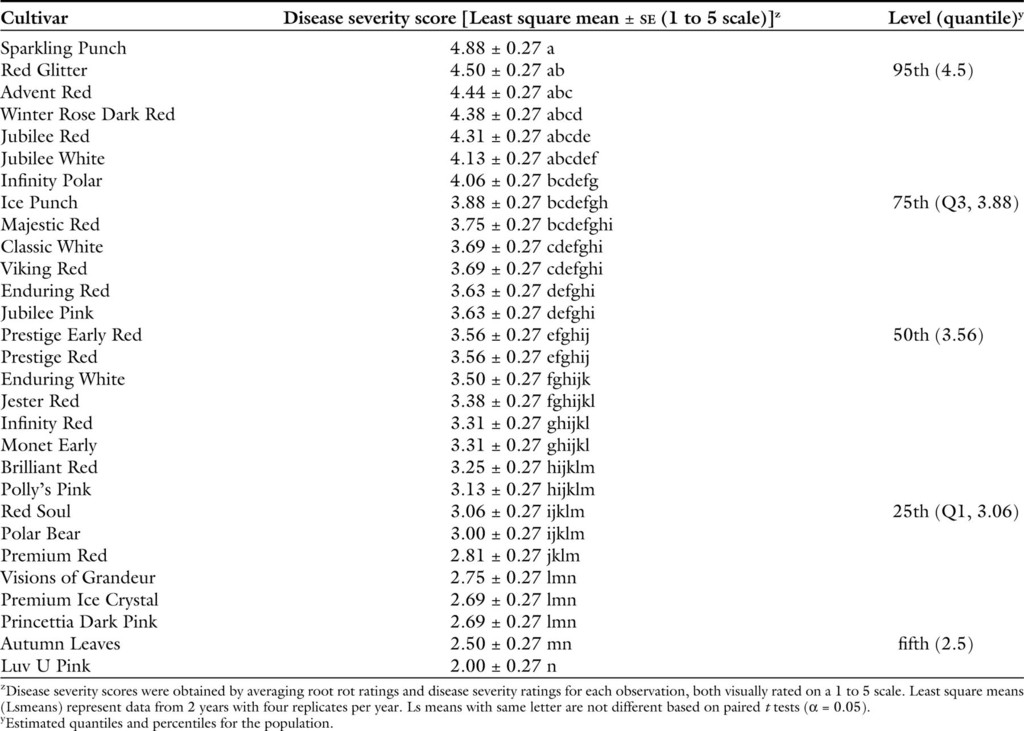 These results indicate that poinsettia cultivars differ in their resistance to pythium root rot caused by P. aphanidermatum and that some cultivars, breeding lines, and lineages may have more resistance than others. The modern era of poinsettia production began with the seedling cultivar Oak Leaf in 1923. From the 1920s to 1960s, all commercial cultivars originated primarily as sports (somatic mutations) of Oak Leaf (Ecke et al., 2004). In the 1960s intensive breeding programs began and new cultivars were introduced. Poinsettia is intolerant of inbreeding and most cultivars are genetically heterogeneous due to outcrossing. To insure commercial uniformity, poinsettia is vegetatively propagated. These breeding procedures and tendency of poinsettia to undergo somatic mutations have resulted in the commercial introduction of many cultivars of uncertain genetic background (Parks and Moyer, 2004). In addition, information on the genetic background of many cultivars is largely proprietary, which makes identifying lineages with increased disease resistance particularly challenging.

Horticultural trait associations with pythium root rot resistance responses were not consistent across breeding companies. For Dümmen Orange, early-season cultivars with compact habits were associated with lower levels of disease, but bract color was not associated with disease severity. By contrast, color was more predictive of partial resistance among cultivars from Syngenta; cultivars with red bracts had the lowest DSS among the company’s cultivars. Overall, 6 of 13 partially resistant cultivars identified in 2015 had red bracts. Cultivars with red bracts consistently ranked among the top selling cultivars, and red bracts were not associated with high DSS in either 2014 or 2015. These results indicate that growers should be able to choose among several red bract cultivars that have higher level partial resistance to pythium root rot than others.

It is unknown if there are any genetic linkages among response time, color, or vigor and pythium root rot resistance. In a previous study, poinsettia cultivars with red bracts were more susceptible to powdery mildew (Oidium sp.) than those with pink, variegated, and white bracts (Celio and Hausbeck, 1997). Further genetic analyses are needed to identify parental lines associated with the phenotypic expression of pythium root rot resistance observed in partially resistant cultivars.

Growers can use the results of this study to guide them when making cultivar selections. Selecting cultivars with partial resistance could be particularly useful in facilities with recurring Pythium problems, or in facilities that may be at risk for pathogen introduction and spread, such as those with recirculating irrigation systems. Because none of the cultivars screened were completely resistant to pythium root rot, these results emphasize the need for integrated pest management strategies that combine cultural practices, host resistance, and fungicides to maximize disease control.

Differences in pythium root rot disease severity on two cultivars of poinsettia with varying levels of partial resistance. (A) Sparkling Punch (E17), susceptible cultivar and (B) Luv U Pink (E25), partially resistant hybrid cultivar. Non-inoculated, healthy controls (C−) are shown on the left whereas inoculated plants (N+) are shown on the right. 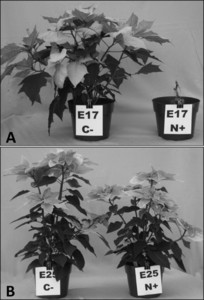 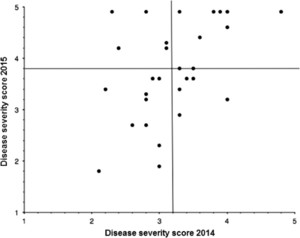