Search for other papers by Mark H. Brand in
Google ScholarClose

Elepidote rhododendrons are important landscape plants because of showy flowers and bold evergreen foliage. The most common flower colors are lavender, pink, and white, but red flower color is highly sought after. Only some elepidote rhododendrons possess sufficient cold hardiness to survive in the colder parts of the northern United States. These very cold-hardy rhododendrons that are able to withstand severe winter conditions are often referred to as “iron-clads.” The American Rhododendron Society categorizes rhododendron cold hardiness in groups from H1 to H6, with H1 being the hardiest and H6 being the least cold-hardy. Flower buds of H1 plants can tolerate cold temperatures down to around minus 25 °F (Kelley, 1991).

Three plants each of the rhododendron cultivars, Besse Howells, Burma, Cary’s Red, Firestorm, Francesca, Henry’s Red, Low Red Frilled, and Nova Zembla (Table 1) were obtained from nurseries and potted into trade no.3 containers using a growth medium composed of four parts of aged pine bark (Fafard, Agawam, MA), two parts of Canadian peatmoss (Fafard) and one part of sand. Plants were overwintered in an unheated polyethylene-covered metal hoop house. Overwintered plants were brought into a greenhouse with set points of 21 °C day and 17 °C night for forcing on the first day of May. Plants were arranged on greenhouse benches in a randomized complete block design with three replications. Depending on the cultivar, flowering started between 21 and 30 May and ended between 2 June and 15 June, and the number of days that plants were in flower was recorded for each plant. For five flower trusses per plant a single petal, located left or right of the dorsal petal containing the flare, was selected and its color was analyzed every day during the flowering period using a colorimeter (CR-400 Chroma Meter; Konica Minolta Sensing Americas, Ramsey, NJ) connected to a data processor (DP-400; Konica Minolta Sensing Americas). Commission Internationale de l’Eclairage (CIELAB, Vienna, Austria) measurements, lightness (L*), red-green axis (a*), and blue-green axis (b*), were taken per petal and these values were averaged for each plant. The colorimeter was calibrated at illuminant C with a white standard. Because of the slightly translucent nature of the plant petal tissue, a standard white background was placed behind each leaf when a CIELAB measurement was taken (Little, 1964). In addition to the CIELAB coordinated value, L*, the coordinates of hue angle (tan −1b*/a*), and chroma (a*2 + b*2) were calculated from a* and b*. Red hues occur on both sides of the 0° and 360° interface on the CIELAB hue wheel. To make values continuous across the hue angles that comprise red hues, 360° was added to hue angles from 0° to 20°. Color difference (ΔE00) from day 1 to day 10 was calculated for all cultivars using the CIEDE2000 color-difference formula (Sharma et al., 2005). Flowering longevity and flower color-difference data were subjected to analysis of variance [ANOVA (PROC GLM)] and mean separation using Tukey’s honestly significant difference (HSD) test (P ≤ 0.05) using SAS (version 9.4 for Windows; SAS Institute, Cary, NC). 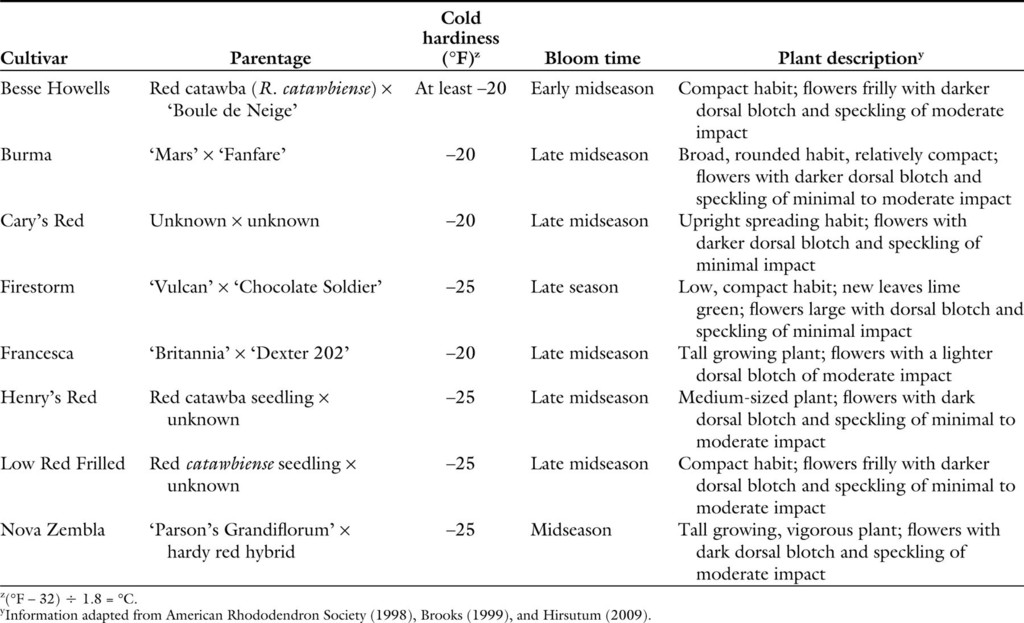 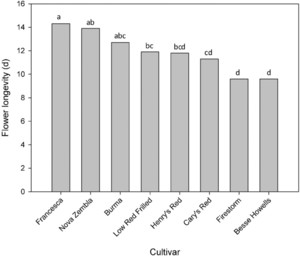 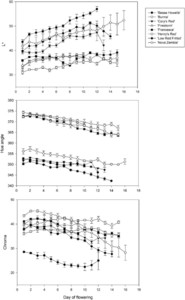 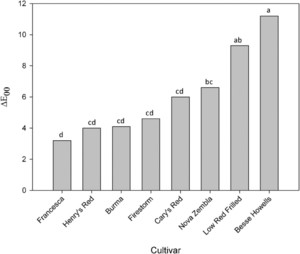 Search for other papers by Mark H. Brand in
Google ScholarClose