Three hundred sixty plants of 17 two-year-old vegetatively propagated succulent plant types and one sexually propagated cactus species grown in three 1/2-inch-diameter plastic pots in a soilless media were received from Altman Plants, Inc., Vista, CA [20 plants of each species/cultivar (Table 1)]. Plants were unpacked and acclimatized in a greenhouse for at least 2 weeks [22 ± 1 °C day/18 ± 1 °C night temperature; natural photoperiod (10 h); daily light integral (DLI) = 4.4 mol·m−2·d−1]. Two hundred eighty-eight plants were selected for uniformity based on leaf number, plant height, and/or branch number (16 of each species/cultivar), and were then further divided into four groups of 18 plants each (one of each species per group). Each group was moved into one of four environmental growth chambers (over time) where air temperatures were managed in each to achieve a 10, 16, 22, or 28 °C plant temperature (mean of three different infrared thermometer brands across species). The uppermost “unfolded” (≥45° from the main stem axis) leaf (succulents) or tubercle (cactus) on each plant was marked using an indelible ink marker when plants were placed in chambers based on the angle of that leaf/tubercle to the main stem. Chamber irradiance and photoperiod were 300 μmol·m−2·s−1 [75% wattage from fluorescent lamps and 25% from incandescent lamps (DLI = 12.96 mol·m−2·d−1)] and 12 h, respectively, and chamber humidity was set to 40%. Plants were watered as needed (media at the bottom of the pot never dried) and were fertilized once weekly with a solution containing 250 ppm nitrogen from a 15N–2.2P–12.5K fertilizer (Excel 15-5-15 Cal-Mag; Everris, Marysville, OH). Plants were not leached to insure media fertility was similar between temperature treatments.

Succulent and cactus plant material evaluated for variation in temperature effects [10 to 25 °C (50.0 to 77.0 °F)] on leaf/tubercle-unfolding rate per day and the indigenous habitat that each plant is from. 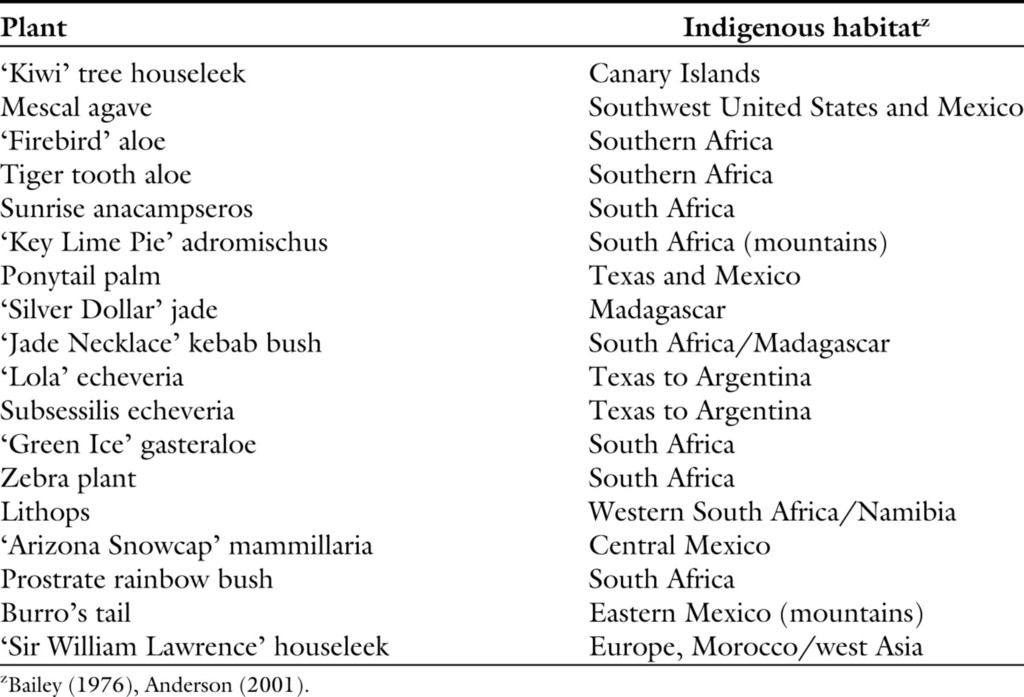 Nine succulent species/cultivars with more rapid leaf unfolding were removed from chambers after 10 weeks (greater than three leaves unfolded after 10 weeks). A second group of nine species/cultivars with a slower leaf/tubercle-unfolding rate (less than three leaves/tubercles unfolded after 10 weeks) was removed after 15 weeks. “Unfolded” leaf/tubercle number above the mark when plants were moved in was counted when plants were removed from chambers. The leaf/tubercle-unfolding rate per day for each plant was calculated by dividing the number of new leaves/tubercles unfolded in chambers by time in chambers (70 or 95 d). The experiment was organized in a completely randomized statistical design in a factorial arrangement with temperature and species/cultivar as the main factors. The experiment was replicated four times over time (one plant/replicate). Analysis of variance was conducted using SPSS [version 24; IBM Corp., Armonk, NY (Table 2)]. Regression analysis across temperatures (within a species) was also conducted (Table 2). The Tukey’s honestly significant difference test at P ≤ 0.05 was employed for mean separation. 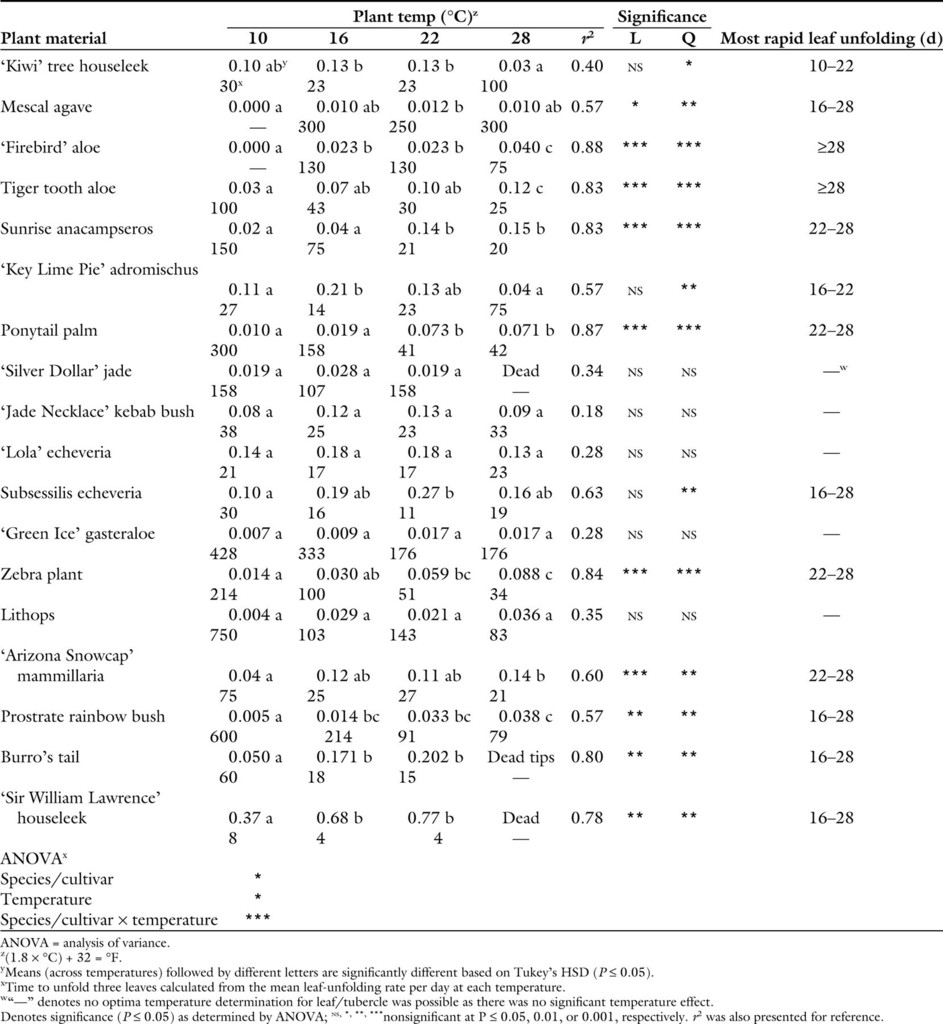 Intermediate temperature (similar to here) effects on development rate of some succulents and tropical cacti have been studied. Kalanchoe [Kalanchoe blossfeldiana (indigenous to Madagascar; Bailey, 1976)] time to flower decreased 19 d when temperature increased from 18 to 24 °C, but decreased only 2 d more when temperature was increased further from 24 to 26 °C (Carvalho et al., 2006). Thanksgiving cactus [Schlumbergera truncata (indigenous to Brazil; Bailey 1976)] days from flower induction to anthesis decreased from 100 to 52 d when average daily temperature increased from 12 to 20 °C and was unchanged when average daily temperature was further increased from 20 to 24 °C (Erwin et al., 1990). Maximum (64 to 71 °C) or minimum temperature (−22 to −5 °C) tolerance of desert cacti has been studied; however, there is little work on intermediate temperature effects on desert cacti development rate [as ‘Arizona Snowcap’ mammillaria here (Nobel and Bobich, 2002; Nobel and De la Barrera, 2003)].

We suspect burro’s tail, Sir William Lawrence houseleek, and ‘Silver Dollar’ jade tip or plant death observed here was related to warm night temperatures, as these plants are routinely exposed to day temperatures ≥28 °C in commercial production and the landscape and plants do not die (personal observation). High night temperatures, or night temperatures similar to day temperatures, could limit carbon dioxide (CO2) uptake and result in carbohydrate limitation of growth, as CO2 is taken up during the night on plants that exhibit crassulacean acid metabolism (CAM) as many cacti and succulents do. Prickly pear (Opuntia ficus-indica) maximum CO2 uptake occurred at a 15 °C night temperature (Nobel and Bobich, 2002; Nobel and Hartsock, 1984). In contrast, the epiphytic cacti night blooming cereus (Hylocereus undatus) had an optimal night temperature for CO2 uptake of 25 °C (Raveh et al., 1995). Whether plants studied here photosynthesize exclusively via the CAM pathway is not known; however, future work should focus on night temperature limitation of photosynthesis as such inhibition may have occurred on other species here that did not exhibit shoot tip or plant death. High night temperatures may also limit growth of some species/cultivars in the landscape in warmer climates or in buildings without expressing obvious symptoms.

Research results reported here provide some insight and guidance on how cactus and succulent production time may be impacted when temperature is changed between 10 and 28 °C. For instance, calculated production time (three leaves divided by leaf-unfolding rate per day) to unfold three leaves at 22 °C was 130 d on ‘Firebird’ aloe, but was 75 d when plants were grown at 28 °C [55 d less time (Table 2)]. In contrast, ‘Key Lime Pie’ adromischus unfolded three leaves after 23 d when grown at 22 °C, but took 75 d to unfold three leaves when grown at 28 °C [53 d longer (Table 2)]. These data suggest that species/cultivars should be grouped by temperature development rate responses to insure greenhouse temperature management decisions or selection of outdoor production locations do not inadvertently increase production time.