Evaluation of the U.S. Mothbean Collection for Seed Yield Potential in Virginia and Nutritional Composition of Freshly Harvested Seed

Even though mothbean (Vigna aconitifolia), a drought- and heat-tolerant crop, may have potential in the eastern United States, information about its production in this region is not available. To characterize potential seed yields and preliminary nutritional quality, 54 accessions were grown near Petersburg, VA, during 2011, 2012, and 2013. The seed yields varied from 48 to 413 lb/acre. The mean concentrations of protein, calcium, iron, and zinc in mature mothbean seed were 21.9%, 0.17%, 64.8 ppm, and 37.5 ppm, respectively. These values compared well with those in mungbean (Vigna radiata) and tepary bean (Phaseolus acutifolius). The results demonstrated that mothbean has considerable potential as an alternative, new food legume crop in Virginia and eastern United States.

Even though mothbean (Vigna aconitifolia), a drought- and heat-tolerant crop, may have potential in the eastern United States, information about its production in this region is not available. To characterize potential seed yields and preliminary nutritional quality, 54 accessions were grown near Petersburg, VA, during 2011, 2012, and 2013. The seed yields varied from 48 to 413 lb/acre. The mean concentrations of protein, calcium, iron, and zinc in mature mothbean seed were 21.9%, 0.17%, 64.8 ppm, and 37.5 ppm, respectively. These values compared well with those in mungbean (Vigna radiata) and tepary bean (Phaseolus acutifolius). The results demonstrated that mothbean has considerable potential as an alternative, new food legume crop in Virginia and eastern United States.

Mothbean is known to be a drought- and heat-tolerant legume crop (Manga et al., 2015). It is also known by other common names, such as mat bean, matki bean, mout bean, or dew gram (Stephens, 1994). The name “moth” comes from the Hindi word pronounced “mat” or “mote” according to the National Academy of Sciences (NAS, 1979). Mothbean is popular pulse crop in India. It has been tried for cattle forage in Texas and California and has shown promise (Stephens, 1994).

In many parts of the world, there is increasing scarcity of water for agriculture (Jury and Vaux, 2007). Consequently, there is potential for the use of drought-tolerant legumes in agriculture not only for their symbiotic nitrogen (N) fixation potential but also for reduced water use. Mothbean is a hot weather, drought-resistant legume. Although mothbean is a short-day plant, Stephens (1994) indicated that climatic requirements of mothbean are similar to those for cowpea (Vigna unguiculata). It could be grown in the spring and fall seasons in most of Florida, and in the winter in southern Florida. When seeded in early September in Gainesville, FL, fair pod production was achieved by late November (Stephens, 1994). The National Academy of Sciences (1979) indicated that mothbean could substantially increase the food or forage available to arid and semiarid lands throughout the tropics, subtropics, and even some warm-temperate areas and that it is the most drought-tolerant pulse crop. Mothbean hay is readily eaten by livestock and has a feeding value almost equal to that of alfalfa (Medicago sativa) hay (NAS, 1979). U.S. Department of Agriculture, Agricultural Research Service (USDA-ARS), currently maintains a collection of 56 mothbean accessions.

Based on our desire to diversify cropping system, we are interested in several crops related to mungbean and mothbean since such crops have been observed to have great potential as supplemental or alternate sources of legume protein (Fery, 2002). Most of these crops are known to be heat and drought tolerant and have potential for introduction in the United States for increased production. It has been observed that introduction of these crops can create new opportunities and provide alternative crops for American farmers. These crops can also provide American consumers access to new and novel foods.

Given that mothbean is known to be adapted to hot, dry climates and no information is available on its production potential in the eastern United States, the objective of this study was to characterize variation among 54 accessions from the USDA-ARS collection for potential seed yield and nutritional quality when grown in the eastern United States.

For this study, 54 accessions from mothbean collection of USDA-ARS maintained at Southern Plant Introduction Station (Griffin, GA) were used. These accessions were grown during 2011, 2012, and 2013 at Virginia State University’s Randolph Farm near Petersburg, VA (lat. 37°15′N, long. 77°31′W). Planting dates were 26 June 2011, 21 June 2012, and 19 May 2013. During 2011, seeds received from Southern Plant Introduction Station were used. However, seeds harvested from previous crops were used for plantings during 2012 and 2013.

The experiment each year was designed as a randomized complete block design with two replications. Each plot consisted of a single row spaced 4 ft apart. The rows were 10 ft long. About 100 seeds were planted in each row with a tractor-driven research planter (Almaco, Nevada, IA). This seed rate is similar to that used in the past for several legume crops such as mungbean. The seed depth was ≈1 inch. The final population was ≈6 plants/ft. These plots received 405 lb/acre of 10N–4.4P–8.3K fertilizer. The fertilizer did not contain any micronutrients and was applied about a month after planting.

The soil type was Abel sandy loam (fine loamy, mixed, thermic Aquatic Hapludult). Experimental area received a preplant incorporated treatment of trifluralin herbicide (Treflan 4EC; DowElanco, Indianapolis, IN) at the rate of 15 fl oz/acre of active ingredient. The plots were manually weeded once. All plots were harvested at maturity by hand and threshed using a stationary thresher and data on seed yields were recorded. Harvest dates were 28 Oct. 2011, 6 Nov. 2012, and 11 Nov. 2013.

Chemical composition of mothbean seeds, produced during 2013, was determined by a commercial laboratory (A&L Agricultural Laboratory, Richmond, VA) according to AOAC standard methods (AOAC, 1995). Protein concentration was calculated as N × 6.25. These analyses were only conducted with seed produced during 2013. All data were analyzed using the analysis of variance (ANOVA) procedures in SAS (version 9.4; SAS Institute, Cary, NC). Means were separated using Duncan’s multiple range test at the 5% level of significance.

Analysis of variance for effects of accessions and years on seed yields of mothbean grown at Petersburg, VA, during 2011, 2012, and 2013.

Results of this study demonstrated availability of considerable variation for seed yield in 54 mothbean accessions (Table 1). Single row seed yields, averaged over 3 years, varied from 166.6 to 19.5 g/row. Based on plot size of 10 × 4 ft, these seed yields correspond to 48 to 413 lb/acre, respectively. ANOVA indicated that variation among 54 accessions was significant at the 1% level. A significant difference (1% level) also existed among years, mean seed yields for 2011 (71 g/row) and 2012 (72 g/row) were not significantly different while mean seed yield during 2013 (115 g/row) was significantly superior to those of 2011 and 2012 years. The interaction between accessions and years was not significant. The highest mean yields were 115, 72, and 71 g/row for 2011, 2012, and 2013, respectively. 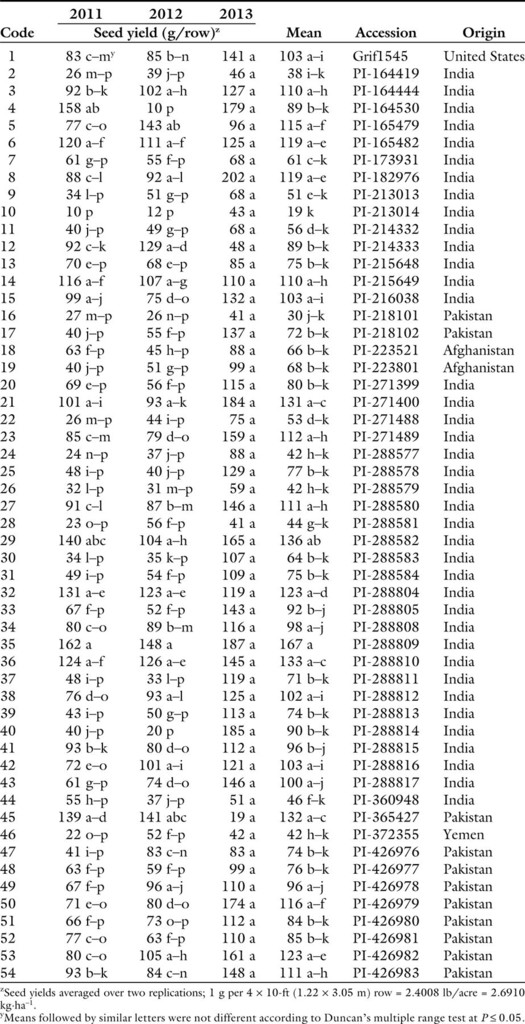 Based on weather data from Petersburg, VA, for the growing season (May–October), the 3 years were not considerably different for average monthly temperatures (Table 3). However, considerable differences existed among the 3 years for rainfall. The mean monthly precipitations at Petersburg, VA, respectively for the 6 months of growing period were 3.1, 3.7, and 1.1 inches during 2011, 2012, and 2013, respectively. The 3 years were considerably different for total rainfall. The year 2013 received considerably less rainfall as compared with 2011 and 2012 indicating that mothbean may be more adapted to drought environments. However, this observation is confounded by the fact that 2013 experiments were planted at an earlier date than those in 2011 and 2012 but is supported by published results. In addition, month of June received more rainfall in 2013 as compared with 2011 and 2012. The plots in these studies were not irrigated. 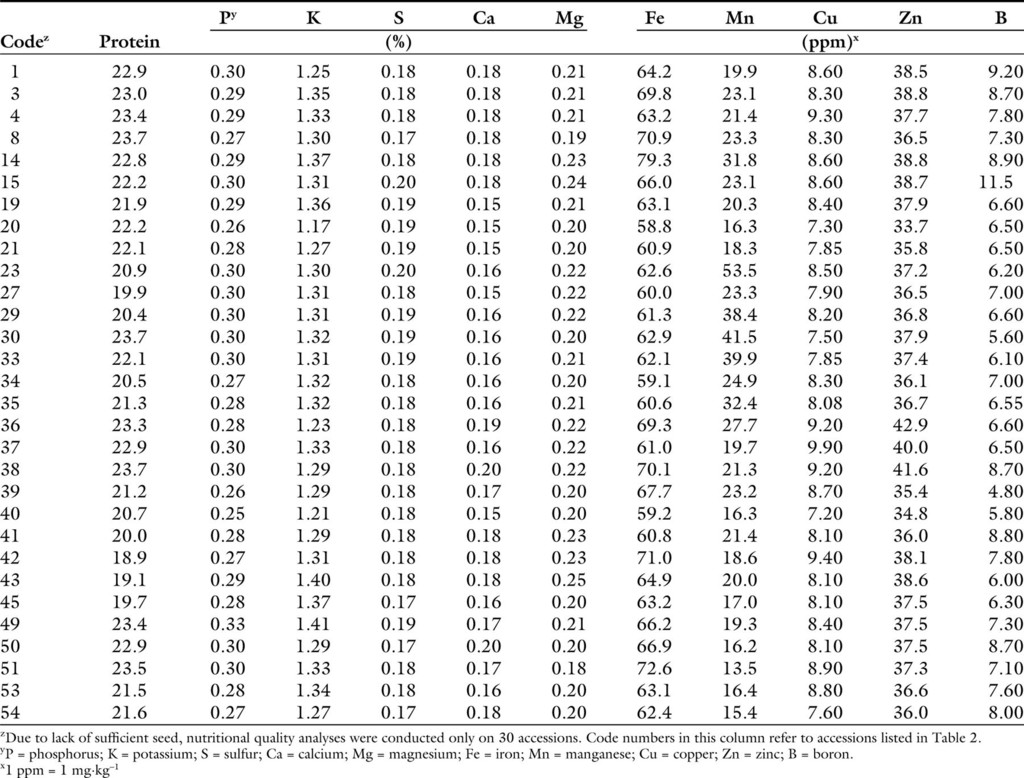 Siddhuraju et al. (1994) indicated that the mean concentration of protein, P, K, Ca, and Mg in seeds from wild mothbean plants from Tamil Nadu state of India were 23%, 0.19%, 1.39%, 0.35%, and 0.26%, respectively, whereas concentrations of Fe, Cu, Mn, and Zn were 20, 1.82, 3.2, and 7 ppm, respectively. The current study indicated that, in general, mothbean produced in the eastern United States had nutritional quality similar to that reported from India except for concentrations of Fe, Mn, and Zn which were of higher magnitude in seed produced in the United States. On the other hand, concentration of Ca in seeds produced in India was greater than that in seeds produced in the United States. However, further investigations are needed to fully explain these comparisons since the current data are from only 1 year and one location.

To characterize nutritional quality of mothbean, concentrations of mothbean mature seeds was compared with that of tepary bean and mungbean (Table 5), two other crops that have been studied in the eastern United States, for protein, P, K, S, Ca, Mg, Fe, Cu, Zn, and B. Our results from mungbean have indicated that this crop is not very drought tolerant. However, tepary bean is an established drought-tolerant crop (Bhardwaj and Hamama, 2004). These results indicated that, in general, mothbean compared well with seed composition data from tepary bean and mungbean. Even though, mean protein concentration in mothbean seeds (21.9%) was slightly lower than 23.9% in tepary bean (Bhardwaj and Hamama, 2004) and 24.3% in mungbean seeds (Bhardwaj and Hamama, 2016), some mothbean accessions had the protein concentration as high as 23.7% (Table 4). Similar values were observed for several other traits including Ca, Fe, and Zn indicating that mothbean nutritional quality may be acceptable. Moreover, these data are from unimproved mothbean accessions, whereas the values for tepary bean and mungbean are from improved cultivars and lines. This indicates that a concerted effort could result in mothbean selections with improved nutritional quality. In this study, concentrations of other nutritional traits (oil and fatty acids, sugars, etc.) were not determined and would need to be characterized through future research efforts. However, anecdotal evidence from India indicates that mothbean is considered a good pulse for human consumption in India.

Nutritional quality traits of mothbean relative to two other food legumes averaged over 54 accessions grown during 2013 at Petersburg, VA. 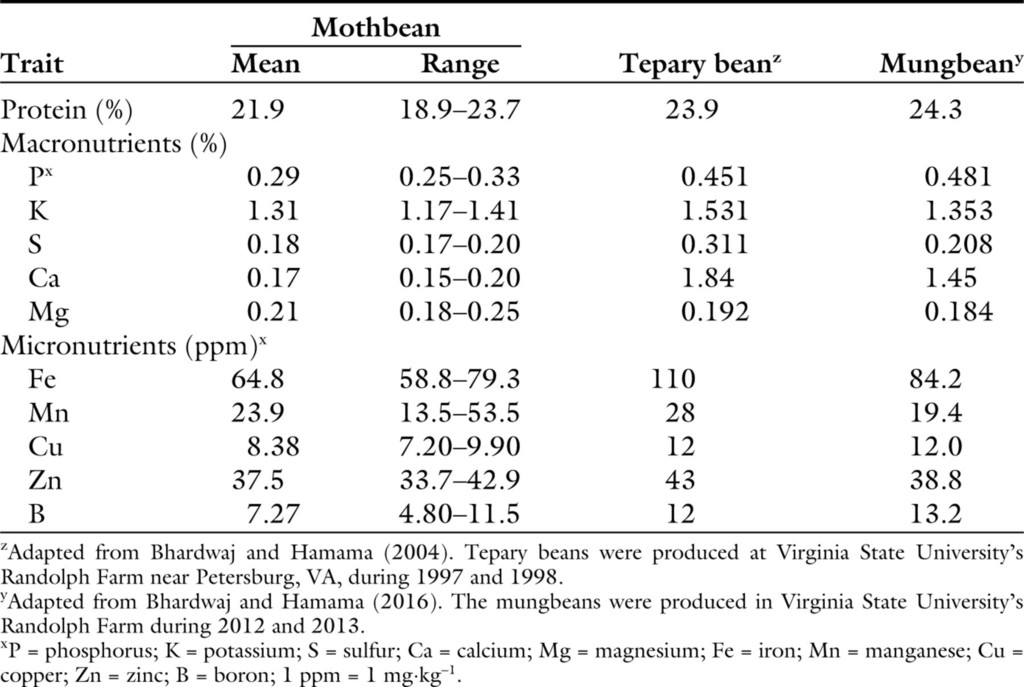 The mothbean crop in this study had a soil-hugging, viney growth habit and was observed to totally cover the soil. Based on results of this study, we suggest that mothbean may have potential as an alternative, new food legume crop for the eastern and, perhaps, also in other parts of the United States.

The results, related to seed yields and nutritional quality traits of 54 accessions, demonstrated that mothbean has considerable potential as an alternative, new food legume crop in Virginia and in the eastern United States.