As consumers seek healthy and more diverse food products, the demand for tropical fruit has increased significantly during the last 15 years with an estimated value of production at $18 billion in 2009 (Food and Agriculture Organization of the United Nations, 2011). Belonging to the Annonaceae family, the atemoya is an interspecific hybrid between the sugar apple (Annona squamosa) and the cherimoya (Annona cherimola) (Nakasone and Paull, 1998). The sugar apple is indigenous to the highlands of Peru and Ecuador, and the cherimoya is widely distributed throughout tropical South America (Marler et al., 1994). However, the term atemoya has also been used loosely in the literature for Annona hybrids resulting from 1) crosses between custard apple (atemoya × A. reticulata), 2) cherimoya × A. reticulata, and 3) for hybrids in which either A. squamosa or A. cherimola is used interchangeably as male or female parents. In this paper, we use the term “atemoya” as the collective term for all these Annona hybrids.

The atemoya grows well in tropical and subtropical climates from sea level to an elevation of ≈1000 m. It adapts to a wide range of soil types including sandy or heavy soils; however, it does not withstand waterlogged soils particularly when it is grafted onto sugar apple (Crane et al., 2013; Morton, 1987). In Florida orchards, atemoya budwood is usually grafted onto custard apple or sugar apple rootstocks; however, the most commonly used rootstock in Israel is the cherimoya (Campbell and Phillips, 1994; Morton, 1987).

Poor fruit set is the key obstacle for the cultivation of atemoya. The atemoya flowers exhibit protogynous dichogamy (female function precedes male function). This incompatibility problem results in incomplete pollination and the production of malformed fruit (Mossler and Crane, 2012). For this reason, hand pollination is often necessary to achieve profitable yields. Lack of pollinators also limits fruit set. Nitidulid beetles (Carpophilus sp. and Urophorus sp.) are the single most important pollinators of atemoya flowers and other annonaceous crops (Nadel and Peña, 1994). Fruit shape varies from conical to ovate; it has slight to pronounced surface protuberances, green-to greenish-yellow skin and contains 10 to 40 dark brown to black seeds. Fruit pulp is white, smooth textured, sweet with a custard-like consistency (Campbell and Phillips, 1980; Crane et al., 2013). The fruit is high in dietary fiber and vitamin C and can range in weight from 200 to 900 g (Meadows and Oswald, 2012).

There is very little information available on total production area of atemoya worldwide. The largest producer in the United States is Florida, with annual production estimated at 50,000 lb and an average seasonal price of ≈$4.00/lb (Mossler and Crane, 2012). In the United States, small orchards are known to have been established in Hawaii, CA, and Puerto Rico.

This study was conducted in Puerto Rico at the U.S. Department of Agriculture, Agricultural Research Service Research Farm in Isabela (Coto clay: clayey, kaolinitic isohyperthermic Typic Hapludox). The soil has a pH of 5.68, 154 mg·kg−1 ammonium-nitrogen (NH4-N), 6.2 mg·kg−1 nitrate-nitrogen (NO3-N), 5.8 mg·kg−1 phosphorous (P), 63.5 mg·kg−1 potassium (K), 1192 mg·kg−1 calcium (Ca), 93 mg·kg−1 magnesium (Mg), 39 mg·kg−1 iron (Fe), 245 mg·kg−1 manganese (Mn), 2.80 mg·kg−1 zinc (Zn), and 1.42% organic carbon. The 95-year (1919–2014) mean annual rainfall is 1649 mm and Class A pan evaporation is 1672 mm. Mean monthly maximum and minimum temperatures are 29.8 and 19.9 °C. Soil samples were taken 2 months before planting by taking 15 borings at a depth of 0–10 inches from each of the projected hybrid rows. Samples were air-dried and passed through a 20-mesh screen. Soil pH in water and 0.01 m calcium chloride (1 soil : 2 water) were measured with a glass electrode. Exchangeable cations (potassium, magnesium, and calcium) were extracted with neutral 1 n ammonium acetate and determined by atomic absorption spectroscopy (Sumner and Miller, 2007). Phosphorus was extracted with 1 n ammonium fluoride and 0.5 n hydrochloric acid and determined using the ascorbic acid method (Benton, 2001). Organic carbon was determined by the Walkley–Black method (Nelson and Sommers, 2007). Soil ammonium and nitrate were determined by steam distillation (Mulvaney, 2007). Originally, the experiment was also established at a second location in a clayey, mixed, isohyperthermic Aquic Haplohumults Ultisol soil. However, a combination of this site having a very heavy, clayey soil and a prolonged wet period due to heavy rainfall caused high mortality among plants forcing us to end research at this site.

Six-month-old trees of hybrids ‘Bradley’, ‘Geffner’, ‘Priestly’, ‘Lisa’, ‘47-18’, and ‘75-9’ grafted onto ‘Lessard Thai’ sugar apple rootstock were transplanted to the field on 8 Aug. 2001 and were arranged in a randomized complete block design with four replications. ‘Bradley’ is one of the first named selections of atemoya. ‘Geffner’ and ‘Priestly’ are Israeli selections (Morton, 1987). ‘Lisa’ is ‘Libby’ cherimoya × ‘Red Sugar’ sugar apple, ‘47-18’ and ‘75-9’ originated from controlled pollination crosses of ‘Geffner’ atemoya × ‘San Pablo’ A. reticulata, and ‘Spain’ cherimoya × ‘Felipe Canul’ A. reticulata, respectively. All plant material was obtained from Zill’s High Performance Plants (Boynton Beach, FL) and shipped air freight to Puerto Rico. ‘Lisa’, ‘47-18’, and ‘75-9’ are atemoya hybrids developed in that nursery by Mr. Gary Zill and have shown commercial potential in nonreplicated plots at the nursery. Before transplanting, the soil was chisel plowed to a depth of 90 cm. Planting holes of 1.5-ft depth were dug with an auger connected by a drive shaft to the power-take-off unit of a tractor. On transplanting day, each grafted tree received 11 g granular P provided in the form of triple superphosphate. Within a replication, plots for each hybrid contained two trees spaced 4 m apart and 6 m between adjacent rows in a triangular array, 168 trees/acre. As an effort to identify hybrids not needing artificial pollination, hand pollination was not performed in this study. This experiment was surrounded by two guard rows of custard apple seedlings.

Irrigation based on tensiometer readings was provided through drip irrigation with two 2-gal/h emitters per tree spaced 1.8 m apart when the soil water tension at a depth of 12 inches exceeded 50 kPa. Fertilization was provided every 3 months using a 15N–2.2P–16.3K–1.8Mg fertilizer at a rate of 185 lb/acre. Herbicide (glyphosate) for weed control was applied only in strips within the planting row. Weeds between rows were controlled with a tractor mower.

Harvests were initiated in Jan. 2006. At this time, experimental trees were 6 years old and producing fruit in sufficiently large numbers for commercial harvest and sale. At each harvest, number and weight of marketable and nonmarketable fruit were recorded. Deformed fruit and those weighing less than 150 g were considered nonmarketable. Representative fruit from each hybrid is shown in Fig. 1. Fruit totaling 10% of those harvested were used to determine total soluble solids using a temperature-compensated digital refractometer (Pal-1; Atago, Tokyo, Japan) when the fruit ripened at room temperature (≈75 °F), ≈5 d after harvest. After a 4-year harvesting period, the experiment was ended in Dec. 2009.

Year, hybrids, and the year × hybrid interaction showed highly significant effects (P ≤ 0.01) on all fruit parameters measured in the study (Table 1). The only exception was total soluble solids, which did not show a significant year effect.

As expected, all hybrids exhibited an overall increase in the number and yield of marketable fruit as trees increased in age (Table 2). However, the magnitude of this response varied among hybrids as expected by the significant year × hybrid interaction (Table 1). Years of heavy cropping were followed by lower production and yield of marketable fruit the following year for particular hybrids (Table 2). Most probably, the high fruit load in some cultivars resulted in depletion of assimilates, which then caused an “off-year” because of light blooming as trees built up carbohydrate reserves (Scholefield et al., 1985). This was particularly the case for ‘Geffner’ in 2007–08 and ‘Lisa’ and ‘75-9’ in 2008–09 (Table 2). ‘Bradley’ was the only hybrid showing relatively stable marketable fruit production and yield. The fact that it did not have a year of heavy cropping supports the hypothesis of assimilate depletion in other hybrids.

Number and yield of marketable fruit of six hybrids of atemoya grown in Puerto Rico. Values are means of four replications.

Significantly higher yield of marketable fruit was obtained by ‘Geffner’ and ‘Lisa’ in comparison with all other hybrids; these yields did not differ between these cultivars, averaging 1507 kg·ha−1 (Table 1). There were no significant differences in marketable fruit yield among ‘Bradley’, ‘Priestly’, ‘47-18’, and ‘75-9’, averaging only 657 kg·ha−1. In spite of ‘Geffner’ producing a significantly higher number of total fruit than other hybrids, this did not translate in a concomitant significant increase in fruit yield. For example, ‘Geffner’ produced over 30% more fruit than ‘Lisa’ but there were no significant differences in yield of marketable fruit between these two hybrids (Table 1). The larger number of fruit produced by ‘Geffner’ may have resulted in high sink demand and smaller fruit.

Fewer fruit and lower fruit yield by ‘Bradley’, ‘Priestly’, ‘47-18’, and ‘75-9’ may have been the result of protogyny (Crane et al., 2013; Mossler and Crane, 2012) or lack of natural pollinators (Crane et al., 2013). There has been some success using nitidulid pheromones to attract pollinators into atemoya orchards, thereby increasing fruit set (Nadal and Peña, 1994; Peña et al., 1999). Preliminary work by the authors indicates that these commercially available pheromones attract nitidulid species responsible for pollination in atemoya (Jenkins et al., 2013, 2015).

Significantly higher soluble solids concentration values were obtained from fruit of ‘75-9’ and ‘Bradley’ which averaged 24.0% (Table 1). These values are similar to those obtained by others (Chiang and Liu, 2011; Paull, 1996).

In conclusion, six atemoya hybrids were evaluated for the first time during 4 years of production. Hybrid cultivars Geffner and Lisa produced more marketable fruit and had higher marketable fruit yield than the rest of the hybrids used in this study. 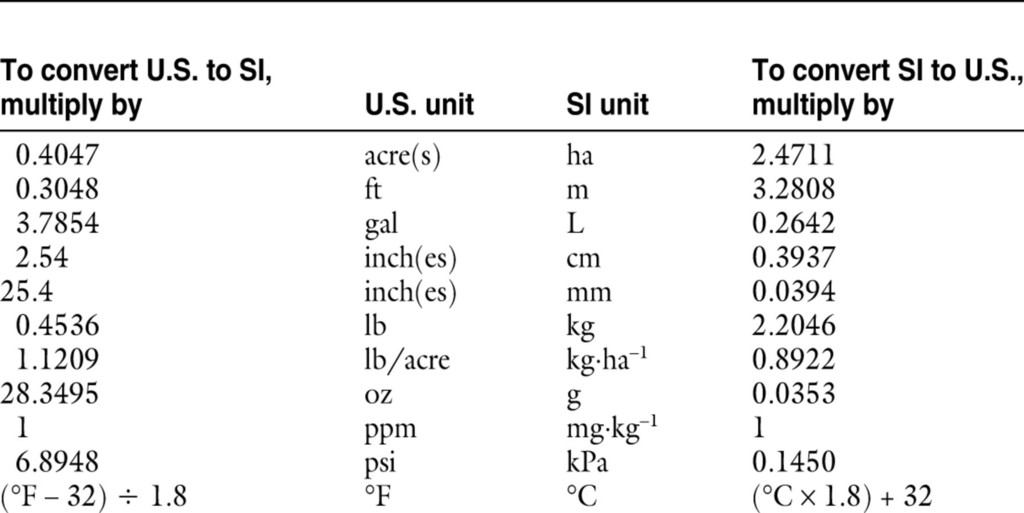 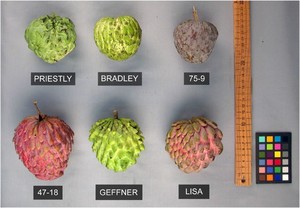