Successful cut flower production depends on the ability to produce crops economically in a short, predictable amount of time. Profitability of a cut flower cultivar relies on market price, yield of long, strong, and easy-to-harvest stems, manageable insect and disease pressures, short crop cycle, and long postharvest life (Armitage and Laushman, 2003; Bridgen, 1992). Few cultivars have all these characteristics. Common problems include unacceptably short stems, long production times, or lengthy flower-initiation procedures. Growers may be able to alleviate some of these issues by applying gibberellic acid to their crops.

Gibberellic acid can be used to break dormancy, promote stem elongation, and replace photoperiodic requirements (Kende and Zeevaart, 1997; Pharis and King, 1985; Sharma and Kumar, 2005; Wittwer and Bukovac, 1957). Examples of cut flowers that are treated with GA3 during production include lisianthus (Eustoma grandiflorum) to prevent rosetting and shorten production time (Jie et al., 2003; JongWon et al., 2000), calla lily (Zantedeschia albomaculata) to increase the number of flowers and shorten production time (Ball, 1991), and species in which GA3 can be used to break dormancy such as liatris (Liatris spicata), monkshood (Aconitum napellus), and peony (Paeonia suffruticosa) as reported by Wanjao and Waithaka (1983), Lurie et al. (1992), and GuoSheng et al. (2009), respectively. With other species, such as cut poinsettia (Euphorbia pulcherrima), tall stems can be produced without GA3, but using the growth regulator can produce the desired height in a shorter time period (Hartrath, 1987). Three benefits were achieved by treating perennial aster (Aster ericoides) with GA3: breaking dormancy, increasing stem length, and reducing production time (Naranja and Balladares, 2008).

Trial plants were started in a greenhouse from seed early each spring or obtained as plugs from commercial suppliers ≈2 weeks before field planting. Standard greenhouse management included growing plants in bedding plant flats with 2.25 × 1.50 × 2.13-inch individual cells containing soilless substrate (Fafard 4P; Conrad Fafard, Agawam, MA), fertilizing at each overhead irrigation with 150 mg·L−1 nitrogen (N) from 20N–4.4P–16.6K liquid fertilizer [20–10–20 (Everris, Dublin, OH)], and setting temperatures to 24/18 °C (day/night). Trial plants were transplanted to the field at 12 × 12-inch spacing before imposition of GA3 treatments. Raised beds had been amended with ammonium nitrate applied at 100 lb/acre N before transplanting, and drip irrigation was used as necessary during the experiments.

Experiments were established as randomized complete block designs with four beds serving as the four blocks and each cultivar × treatment combination serving as an experimental unit within each block. Individual plants per treatment in each block served as subsamples—the number of which was consistent within each cultivar but differed among cultivars. Data were analyzed using analysis of variance (SAS version 9.2; SAS Institute, Cary, NC), and means were separated using least significant difference test at P ≤ 0.05.

‘Aurora Deep Purple’ delphinium, ‘Imperial Giants Pink Perfection’ larkspur, ‘Column Lilac Lavender’ stock, and ‘Amazon Neon Duo’ sweet william seeds were sown on 9 Jan. Plants were transplanted to the field on 3 Mar. Plants were sprayed to point of runoff from leaves and stems on 17 Mar. with 0, 50, 100, 200, or 400 mg·L−1 GA3 (ProGibb; Valent BioSciences, Walnut Creek, CA). Two weeks later, a second application of equal concentration was applied to half of the plants that had received 50, 100, or 200 mg·L−1 GA3. Subsample number for each treatment by block combination was 16, 8, and 6 for larkspur and sweet william, stock, and delphinium, respectively.

‘Toreador Red’ celosia, ‘Camelot White’ foxglove, and ‘Benary’s Giant Scarlet’ zinnia seeds were sown on 30 Jan., and plugs of ‘Bouquet Purple’ sweet william and ‘Summer Pastels’ yarrow were received from a commercial grower on 1 May. Plugs and seedlings were transplanted to the field on 29 Mar. (foxglove), 14 May (sweet william and zinnia), or 19 May (celosia and yarrow). Plants were sprayed to point of runoff from leaves and stems on 30 June with 0, 200, 400, 800, or 1600 mg·L−1 GA3 (ProGibb). Plants were well established and a few (sweet william and yarrow) or all (celosia, foxglove, and zinnia) had just begun to produce flower stalks when treatments were imposed. Subsample number for each treatment by block combination was 16, 12, 8, and 4 for celosia, zinnia, sweet william and yarrow, and foxglove, respectively.

‘High Tide Blue’ and ‘High Tide White’ ageratum and ‘Nippon Taka’ ornamental pepper seeds were sown and plugs of ‘Compliment’ mix lobelia were received from a commercial grower on 1 Apr. Plants were transplanted to the field on 13 Apr. (lobelia), 25 Apr. (ageratum), or 4 May (ornamental pepper). In addition to the pretransplant nitrogen incorporated into the raised beds as in previous years, beds were fertilized with 200 mg·L−1 N from 20N–4.4P–16.6K through drip irrigation on 12 June and 12 July. Plants were sprayed to point of runoff from leaves and stems on 19 June with 0, 200, 400, 800, or 1600 mg·L−1 GA3 (ProGibb). Plants were well established and had begun producing flowers (ageratum and ornamental pepper) or flower stalks (lobelia) at the time treatments were imposed. Subsample number for each treatment by block combination was 12, 6, and 4 for ornamental pepper, lobelia, and ageratum, respectively.

Effect of gibberellic acid (GA3) on flower stem length of field-grown ‘Imperial Giants Pink Perfection’ larkspur and ‘Amazon Neon Duo’ sweet william. Plants were sprayed with GA3 2 weeks after transplant to the field and again 2 weeks later in all cases but the 400 mg·L−1 treatment, which was not repeated. Means are an average of 16–33 stems.

Gibberellic acid applications did not affect the number of flowers harvested, the average number of days to flower harvest, or flower appearance of the four first-year cultivars (data not shown). We observed that foliage of sweet william plants was lighter green for 7–10 d after treatment.

Treatment with 800 mg·L−1 GA3 resulted in the longest foxglove flower stems, the only cultivar for which stems produced on plants treated with the highest GA3 concentration were significantly shorter than for the next lower concentration (Table 2). Likewise, foxglove was the only cultivar in which flower malformations were common, occurring after all GA3 treatments and becoming more prevalent as concentration increased. An insufficient number of cut stems were produced to draw conclusions beyond the basic stem length observations.

Application of GA3 in zinnias had two statistically significant effects apart from flower stem length. All GA3 treatments resulted in reduced flower diameter (Table 3), though number and appearance, apart from diameter, of zinnia flowers was unaffected by GA3 treatments. A slightly reduced time to harvest was observed at the higher GA3 concentrations (Table 3).

Gibberellic acid treatments did not influence number of stems produced or time to harvest in celosia, sweet william, or yarrow (data not shown).

Influence of GA3 treatments on flower/fruit stem length ranged from reduced length to no effect to increased length. Except for the highest concentration, the effect of GA3 treatments on ‘High Tide Blue’ ageratum was to suppress flower stem elongation as compared with control plants (Table 4). Flower stem length in ‘High Tide White’ ageratum did not differ among treatments (data not shown). Lobelia flower stems were 9.4 cm longer than stems from control plants when treated with 800 mg·L−1 GA3, and stem lengths were greatest in ornamental pepper when treated with 400 to 1600 mg·L−1 GA3 (Table 4).

We observed different responses to GA3 treatments among ‘High Tide Blue’ and ‘High Tide White’ ageratum, ‘Nippon Taka’ ornamental pepper, and ‘Compliment’ mix lobelia in terms of time to harvest. Lobelia exhibited a trend for higher concentrations of GA3 to reduce the number of days to harvest, with 1600 mg·L−1 GA3 shortening time to harvest by 9 d compared with control plants (Table 4). The lower concentrations of GA3 significantly influenced time to harvest by shortening the time by as much as 9 d in ‘High Tide White’ ageratum and 3 d in ornamental pepper when treated with 800 and 200 mg·L−1 GA3, respectively. Of the GA3 treatments, only 800 mg·L−1 differed from control plants in ‘High Tide Blue’ ageratum, with the GA3-treated plants taking 2 d longer than controls to yield harvestable flowers (Table 4).

Gibberellic acid did not influence the number of flower/fruit stems in any cultivar (data not shown). Ageratum cultivars and ornamental pepper appeared consistently normal in flower/fruit appearance, but lobelia exhibited occasional flower abnormalities when plants were treated with 1600 mg·L−1 GA3.

Applications of GA3 were used on 13 field-grown cut flower cultivars with the aim of increasing flower stem length and/or shortening time to harvest. To show promise for commercial implementation, the benefit(s) of GA3 treatments would have to be great enough to have practical importance without significant deleterious effects. With this thought in mind, our work allowed us to divide the tested cultivars into groups according to the likelihood that GA3 treatment would have practical benefit in developing new field-grown, cut flower protocols (Table 5). Additional research is required to refine treatments and demonstrate that GA3 treatments are an economically viable option for improving field-grown, cut flower production in the four cultivars for which we found that GA3 application holds promise: Bouquet Purple sweet william, Imperial Giants Pink Perfection larkspur, Summer Pastels yarrow, and Toreador Red celosia.

Thirteen cultivars grouped according to whether gibberellic acid (GA3) treatments were found to be neutral/detrimental, of limited benefit, or potentially beneficial in the production of field-grown cut flowers. 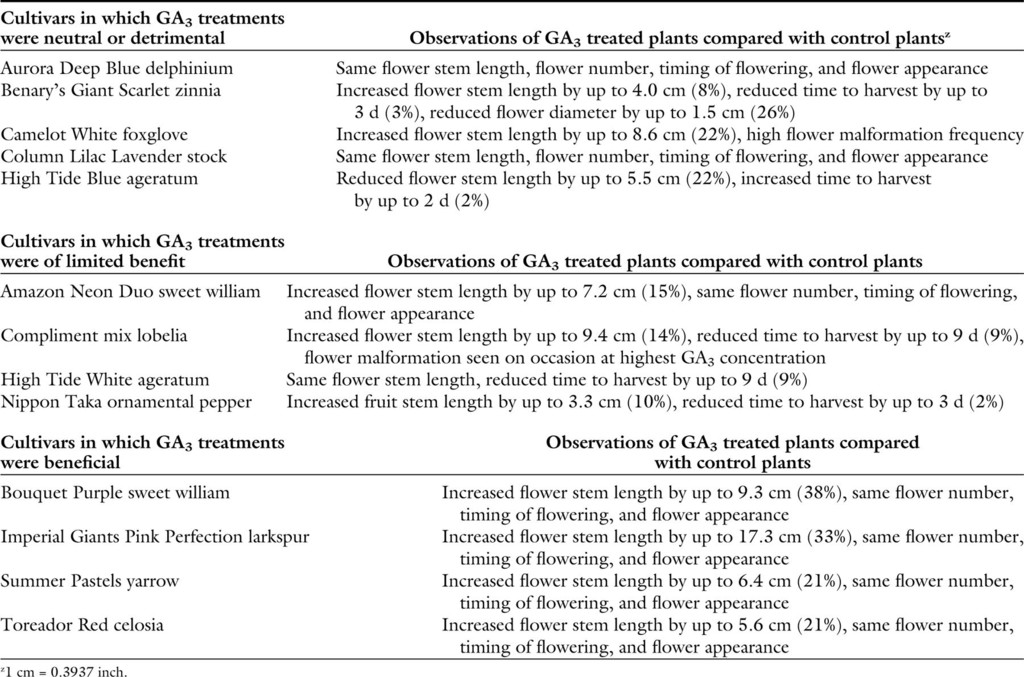 We found that GA3 increased flower stem length in nine of the 13 cultivars tested, with 400 mg·L−1 GA3 or higher resulting in the longest stems for most cultivars. One application was tested in most cases, and the most pronounced influence of GA3 was typically observed 3–6 weeks after application. One cultivar (High Tide Blue ageratum) had shorter flower stems in some of the GA3 treatments as compared with controls, and three cultivars appeared to be insensitive to foliar applications of GA3, similar to findings in Brilliant Barbara stock (Grzesik, 1995). Because the GA3 concentrations we used were based primarily on published literature for greenhouse-grown crops, concentrations and number of applications used in these studies may have been too low to affect growth of the cultivars that appeared GA3 insensitive, especially as field-grown plants may have lower GA3 absorption given their thicker cuticle compared with greenhouse-grown plants (Bleckmann et al., 1980; Sandoval et al., 1994; Stover and Greene, 2005; Templeton and Hurtt, 1972).

As has been shown in gladiolus (Gladiolus) by Dua et al. (1984) and chrysanthemum (Chrysanthemum morifolium) by Gupta and Datta (2000), we observed shorter harvest times in four of the tested cultivars. Our work showed a reduced time to harvest in response to GA3 application ranging from 3 d in ornamental pepper and zinnia to 9 d in ‘High Tide White’ ageratum and lobelia. Our finding with zinnia contrasts with earlier research showing that application of 200 mg·L−1 GA3 delayed bud initiation by 1.6 d (Sharma et al., 2008). None of the four cultivars exhibiting reduced time to harvest were among the cultivars we believe showed promising benefit from GA3 treatment, but the limited benefit of GA3 in three of them may warrant further investigation (Table 5).

The negative effects of GA3 applications that we observed in some cultivars, such as reduced flower diameter in zinnia, lighter green foliage in sweet william, and flower malformations in foxglove and lobelia, were not surprising given previous research with these and other cut flowers. Keever (1999) documented that flower malformations and lighter green foliage occurred along with longer flower stems in foxglove treated with GA3. Temporarily lighter green foliage following GA3 applications was noted by Marth et al. (1956) in many of the dozens of plant taxa tested in their seminal work. Other negative side effects on horticultural production characteristics caused by GA3 include reduced flower diameter and malformation in cosmos (Cosmos bipinnatus), later and fewer florets in gladiolus, flower deformities in billy buttons (Craspedia globosa), decreased fruit production in chili pepper (Capsicum baccatum), and reduced spadix width and flower abnormalities in calla lily as reported by Molder and Owens (1974), Dua et al. (1984), Annis et al. (1992), Tofanelli et al. (2003), and Choi et al. (2005), respectively. 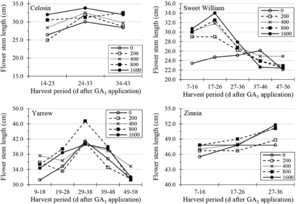