Significant research on and development of automated thinners was conducted in the 1960s and 1970s due to a shortage of low-cost labor (Lillywhite et al., 2004; Siemens et al., 2012). During that time, nonselective and selective automated thinners were developed not only for specialty crops but also for field crops such as cotton (Gossypium hirsutum) and sugar beet (Beta vulgaris). An oscillating hoe or a rotating blade was used in nonselected thinners to remove “blocks” of plants at fixed intervals without considering the actual location of plants. When the stand before thinning was not uniform and plants were removed between set spacing, this resulted in large gaps in the rows (Siemens et al., 2012). For selective thinners, various sensors were used to detect plant locations, and excess plants were removed by hydraulically actuated knife arms (Siemens et al., 2012). The development of this equipment was halted due to availability of precision planters in cotton and sugar beet, and the higher cost of automated thinners compared with hand thinning at the time (Lillywhite et al., 2004).

In recent years, lack of skilled farm laborers and their high cost have become significant issues for the vegetable industry, forcing growers to search for mechanical means to replace manual management practices (Taylor et al., 2012). According to vegetable producers in Imperial Valley, CA, the time per person to thin 1 acre and hand thinning quality in lettuce have been declining in recent years. Development of automated thinners enables the vegetable industry to cope with the rising cost of hand labor and to move hand labor to other tasks that are not automated, such as harvesting.

Plant spacing affects lettuce yield and quality significantly (Maboko and Du Plooy, 2009; Ririe, 1972). In both iceberg and romaine lettuce, seeds are typically sown 2.5 inches apart. Conventionally, plants are thinned at about four-leaf stage by hand hoeing to 10- to 12-inch in-row spacing, depending on lettuce type and growing season. Lettuce crops with in-row spacing larger than 12 inches result in a small number of harvestable plants. In contrast, lettuce crops with in-row spacing smaller than 10 inches result in large number of small hearts that often do not meet market standards (Ririe, 1972). A nonuniform stand also reduces the number of harvestable plants due to different maturity times among plants (Ririe, 1972). Maintaining lettuce uniformity is more challenging when the crop is planted during a warm period because high temperature increases plant variability in crop emergence and plant size in lettuce (Guzman, 1986). This is especially important in southern California and southwestern Arizona, where the average maximum temperature in September is 102 °F and where over 90% of U.S. wintertime lettuce is produced.

Given the rapid increase in the use of automated thinners in the lettuce industry, it is important to examine the effects of this technology on in-row spacing, plant size, and crop yield and to determine if there are ways to enhance its benefits. Therefore, the objective of this study was to compare the effects of automated thinning and hand thinning on the uniformity of in-row plant spacing, plant size after thinning and at harvest, and crop yield.

The experiment was a randomized complete block design with four replications. Two treatments were included in each experiment: automated thinning and hand thinning. Each plot was six 80-inch-wide beds and 600 ft long. Six rows of romaine heart lettuce were grown on each bed.

Durum wheat (Triticum durum) was grown in the field for Expt. 1, and summer sudangrass (Sorghum bicolor var. sudanense) was grown in the fields for Expts. 2 and 3 before romaine heart lettuce planting (Table 1). One month before each planting, tillage operations to prepare for lettuce planting included disking, ripping, disking again, laser leveling, listing, and bed shaping. Preplant fertilizer 11N–22.7P–0K was applied at 500 lb/acre. During the growing season, 150 lb/acre of N fertilizer in the form of urea ammonium nitrate (UAN 32) was split-applied to the crop with irrigation. This was significantly higher than the rate recommended by the University of California Cooperative Extension, but is commonly used in the region (Smith et al., 2011). Solid-set sprinklers were used to irrigate the crop in each field, scheduled by evapotranspiration values from local weather stations and farm manager’s experience.

Romaine heart lettuce varieties Eblin, Sunbelt, and Rubicon were planted for Expts. 1, 2, and 3, respectively. Different varieties were used because they were suitable for each growing period and were chosen by the collaborating grower. Lettuce was planted with seed spacing of 2.5 inches using a precision planter (Mel Beck Precision Planters, Nyssa, OR). Hand thinning was done at the four-leaf stage. Automated thinning was conducted at the two-leaf stage, since current automated thinners do not move soil and thus avoid burying and damaging young plants as occurs in hand thinning operations. Additionally, thinning at an earlier stage enables the computer to visually identify lettuce plants that are spaced closely together. An automated thinner (Vision Robotics) was used to thin the romaine heart lettuce crop. Unwanted plants were sprayed with ammonium nitrate (AN 20) or a mixture of AN 20 and ammonium thiosulfate for a total of 56 lb/acre of N. Before the subsequent irrigation (3–5 d after automated thinning), an equal amount of N fertilizer in the form of AN 20 was sidedressed between crop rows in plots to be hand thinned. Hand thinning was conducted ≈10 d after automated thinning. The hand labor crew thinned the field plots without being notified that their thinning accuracy would be compared with automated thinning. All other management practices, such as pesticide application and hand weeding, were conducted according to common farming practices recommended by the University of California Cooperative Extension (Smith et al., 2011).

Plant biomass samples were collected immediately after hand thinning on 12 Oct. 2013, 24 Dec. 2013, and 25 Jan. 2014 for Expts. 1, 2, and 3, respectively. A sample of 20 lettuce plants was collected randomly from each plot. All samples were oven-dried at 160 °F with ventilation, weighed, and then ground to 0.5 mm for total N concentration analysis using an elemental analyzer (model NA1500 N/C; Carlo Erba Instruments, Milan, Italy).

One day before hand thinning, eight overhead images were taken in each plot to compare lettuce leaf area in the automated thinning plots to the nonthinned plants in the hand thinning plots. Overhead images were also taken at 1–3 d, 1 week, and 2 weeks after hand thinning to compare plant size between the two treatments. A digital camera was attached to a straight pole and was placed ≈2.5 m over a bed to take the images. A meter stick was placed between the middle two rows in each image for plant leaf area calibration. Each image was processed using ENVI (Exelis Visual Information Solutions, McLean, VA) to separate and count the pixels of each plant. The number of pixels was used to calculate leaf area of each plant in each image using the length of the meter stick to determine the number of image pixels per meter. Mean leaf area for each plot was calculated from leaf area of all plants in the eight images.

In-row spacing in both treatments was measured 1 d after hand thinning. The measurements were taken in a total of 21, 39, and 23 m of row length from the center area of each plot in Expts. 1, 2, and 3, respectively. Before commercial harvest, plants in 67 ft2 (10 ft of the 80-inch-wide bed) from each plot were removed to determine the uniformity of the plant and heart weights. All lettuce plants from each sampling area were cut at the soil surface. The number of plants in each sampling area was used to estimate plant population in each plot. The fresh weights of individual plants were recorded. Each plant was then cut to simulate romaine heart harvest in the field and the heart weight was recorded. To reduce variation, all plants from each field were cut to obtain romaine hearts by the same individual.

Lettuce hearts were commercially harvested by a hand labor crew. At the time of harvest, all plots in Expt. 1 or 3 were harvested by the same crew. One of the four blocks in Expt. 2 was harvested by a different crew from the one harvesting the other three blocks due to changes in available personnel on different days. Romaine hearts were cut and packed into boxes. Each box contained 12 bags each with three romaine hearts. The number of boxes from each plot was recorded.

Since the three field experiments were conducted during different growing periods, data from each field are presented separately. Analysis of variance was used to compare plant biomass at hand thinning, leaf area, plant population, and crop yield. Treatment means were separated by least significant difference at the 0.05 level when appropriate. Analyses were performed using SAS (version 9.3; SAS Institute, Cary, NC).

For bin i in histogram 1 and 2, the significance of difference is defined as 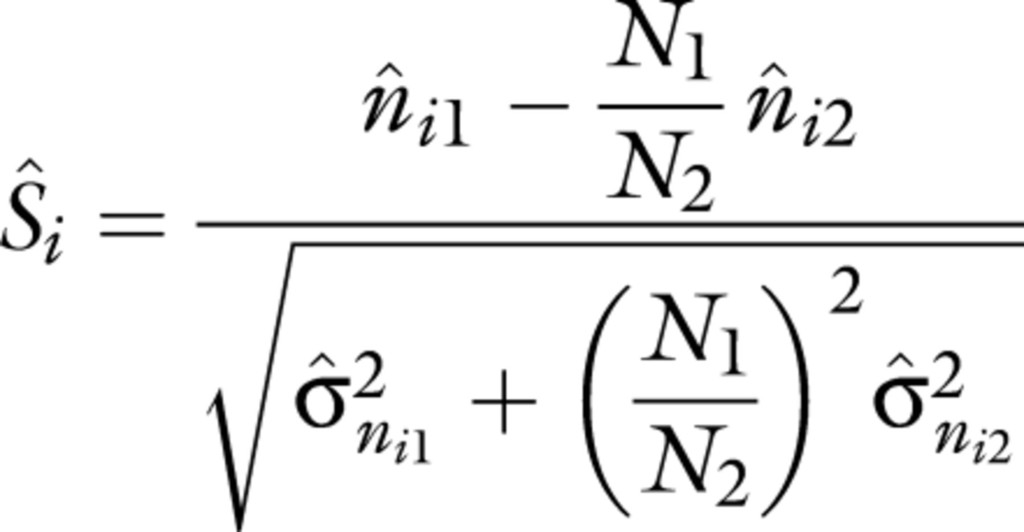 Romaine lettuce leaf area obtained from analysis of overhead images before and after hand thinning.

Plant and heart weight before harvest.

Soil disturbance during hand thinning could be one major reason for smaller lettuce plants in the hand thinning treatment. During hand hoeing operations, wanted young lettuce plants can be injured when soil is moved to uproot unwanted plants, while automated thinning does not disturb the soil surface or otherwise impact plants. An estimated 10% to 15% of plants were partially covered by soil during hand thinning in this study. In addition to sublethal effects on lettuce plants, soil disturbance can make plants more susceptible to wind whipping (Kioke, 2011). Also disturbing the soil can increase evaporation rates by increasing the evaporative surface around the young plants. This can reduce moisture in the top layers of soil and subject plants to additional water stress when plant roots are shallow during a seedling’s early growth stage.

Lack of crop uniformity can reduce the number of harvestable plants and marketable crop yield of lettuce (Ririe, 1972). Variation in lettuce plant size can be due to variety, biotic, and abiotic stresses during stand establishment (such as high temperature in September in southern California and southwestern Arizona), and/or thinning practices (Guzman, 1986). Automated thinning reduces plant size variability by increasing the uniformity of in-row spacing. In contrast, plant size variability increases as a direct result of hand thinning and as an indirect result of the abiotic stress caused by hand thinning.

Distribution of romaine lettuce plant in-row spacing affected by hand thinning and automated thinning in Expt. 1 (A and B), Expt. 2 (C and D), and Expt. 3 (E and F). The in-row spacing in the x-axis is the median of each column. For example, the column with 26 cm represents the percentage of plants that fall into in-row spacing of 24 to 28 cm; 1 cm = 0.3937 inch.

Individual romaine lettuce plant weight at harvest affected by hand thinning and automated thinning in Expt. 1 (A and B), Expt. 2 (C and D), and Expt. 3 (E and F). The in-row spacing in the x-axis is the median of each column. For example, the column with 850 g represents the percentage of plants that fall into plant weight of 800 to 900 g; 1 g = 0.0353 oz. 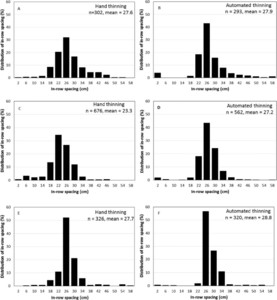 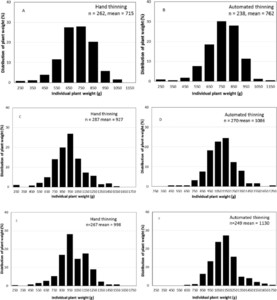 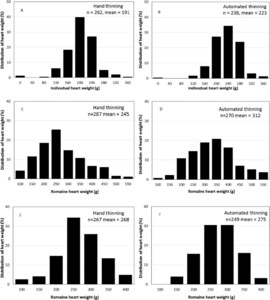