Paclobutrazol is stable in water. In sterile aqueous solutions, 94% to 98% of triazole ring–labeled paclobutrazol was present after 30 d at pH ranging from 4 to 7 (U.S. Environmental Protection Agency, 2007). The compound did not undergo appreciable photolysis in water when exposed to 1.94 to 2.50 W·m−2 of electromagnetic radiation at 420 nm in pH 7 buffer (U.S. Environmental Protection Agency, 2007). Barrett (2006) described a commonly suspected and potentially serious situation where paclobutrazol sprays not intercepted by target plant canopies can contact exposed bench or floor surfaces and subsequently leave dried residues. During later irrigation events, dried spray residues may dissolve in excess irrigation water and be transported to either a holding tank or retention pond. Reapplication of irrigation water contaminated with paclobutrazol can cause stunting and deformed growth in nontarget floriculture crops. Million et al. (1999) showed that continuous irrigation with concentrations as low as 5, 17, and 24 µg·L−1 were enough to cause stunting of ‘Gin’ begonia (Begonia ×semperflorens-cultorum), ‘Super Elfin Coral’ impatiens (Impatiens walleriana), and ‘Nob Hill’ chrysanthemum (Dendranthema ×grandiflora), respectively. In comparison, paclobutrazol is commonly applied at a concentration several orders of magnitude higher than this biologically active threshold, at 0.01 to 8 mg·L−1 as a soil application, or 1 to 200 mg·L−1 as a foliar spray (Latimer, 2015; Whipker, 2015).

Water catchment and recirculation is an increasing practice, especially in greenhouse production. Despite the many ecological and economic benefits of water recirculation, accumulation of undesired contaminants is a risk to plant production. The risk of paclobutrazol accumulation in recirculated irrigation indicates a need for periodic monitoring of paclobutrazol in ponds and storage tanks. Although standards exist for collecting water samples for analysis of organic compounds (Rice et al., 2012; U.S. Geological Survey, 2006), no specific directions could be found for collecting water samples for paclobutrazol analysis. An important consideration in collecting water samples is the type of bottle used for sample collection. Virtually all analytical laboratories instruct growers to send water samples in clean plastic bottles for analysis [typically for pH, electrical conductivity (EC), total dissolved solids, alkalinity, etc.]. However, the U.S. Geological Survey instructs that water samples to be analyzed for organic compounds, in general, should be sent in bottles made from fluorocarbon polymer, glass, or metal components. More specifically, it instructs against the use of plastics other than fluorocarbon polymers. The Standard Methods for Examination of Water and Wastewater recommends hard glass containers because of their lower release of analytes (i.e., silica, sodium, and boron) and lower absorption of pesticides and metals compared with soft glass and plastic (Rice et al., 2012). In addition, amber-colored containers are recommended to avoid photodegradation. Most practitioners, by default, will likely use the same plastic bottles for water samples intended for paclobutrazol analysis as they would for traditional pH and nutrient analysis.

Another factor to consider when submitting water samples is how the sample should be treated at the time of collection and stored until the time of analysis. For example, the U.S. Geological Survey recommends methods such as filtration, acidification, or chilling for sample preservation depending on the compound of interest (Shelton, 1994). While parameters such as filtration and acidification might affect organic compounds in general, they are probably beyond the scope of what most greenhouse growers can perform on site. However, storage temperature and storage duration are factors that can be controlled by most greenhouse growers, and the influence of these factors should therefore be quantified. The objective of this research was to determine if the material of the sample container or storage temperature affects paclobutrazol stability after 3, 14, or 30 d of storage.

A solution of 0.1 mg·L−1 paclobutrazol in water was prepared from a commercial source [4% paclobutrazol (Bonzi; Syngenta, Greensboro, NC)]. All paclobutrazol solutions were made with reverse osmosis water that had pH 6.7 and alkalinity of 4.9 mg·L−1 bicarbonate (HCO3−). Immediately after sample preparation, three 200-mL aliquots were set aside for analysis of initial paclobutrazol concentration of the 0.1 mg·L−1 solution. Additional 200-mL aliquots of the prepared solution were transferred to clear glass (400 mL; Fisher Scientific, Pittsburg, PA), amber-colored glass (250-mL glass amber, Fisher Scientific), or plastic containers (250-mL low-density polyethylene, Fisher Scientific) and were stored either in a refrigerator at 4 °C or on a laboratory counter at 20 °C. Actual temperature in each environment was recorded with thermocouples attached to dataloggers (Hobo U23 Pro V2; Onset Computer Corp., Bourne, MA). There were five replicates per container material in each environment. A 10-mL aliquot was then collected from each bottle at 3, 14, and 30 d after the initial preparation and analyzed for paclobutrazol concentration.

The 10-mL aliquot was applied to solid-phase extraction (SPE) columns (Strata X 33u Polymeric Reversed Phase 30 mg/3 mL; Phenomenex, Torrance, CA) mounted in a 24-port SPE vacuum manifold (Fisher Scientific). The SPE columns were subsequently rinsed with ≈0.6 g acetonitrile (MeCN) to elute paclobutrazol from the sorbent bed into preweighed collection tubes. The eluates were weighed and transferred to gas chromatograph (GC) vials (2-mL borosilicate glass; Fisher Scientific). An autosampler (7693; Agilent Technologies, Santa Clara, CA) was then used to inject 2 µL onto a GC (7890B; Agilent Technologies) equipped with a mass spectrometer [MS (5977A; Waters Corp., Santa Clara, CA)]. An isothermal capillary injector (1177; Varian, Palo Alto, CA) was maintained at 250 °C with a 1:20 split ratio. A fused silica capillary column (30 mm × 0.25 mm i.d. × 0.25 µm film thickness; Agilent Technologies) was used for analysis according to the following program: 70 to 280 °C at 10 °C·min−1 and then held at 280 °C for 5 min. Helium (99.999% purity) was used as the carrier gas at a flow rate of 1.0 mL·min−1. The transfer line between the GC-MS was maintained at 280 °C. The MS detector was operated in electron impact ionization mode at 70 eV with a scan range of 125–236 m/z. System control was accomplished using system software (Mass Hunter GC/MS Acquisition Software; Agilent Technologies). The fragmentation pattern (key fragments with 236 and 125 m/z) of paclobutrazol derived from the commercial formulation was compared with an analytical standard (Chem Service, West Chester, PA) for identification purposes. The external standard method was used for quantifying paclobutrazol. Serial dilutions of a paclobutrazol standard in MeCN ranging from 0.5 to 5.0 mg·L−1 were analyzed by GC-MS as previously described. Using the sampling method and SPE process described herein, this calibration curve in MeCN provides a detection range of paclobutrazol in water from 0.04 to 0.4 mg·L−1. Peak areas were measured using quantification software (Agilent Technologies), and a standard concentration curve was developed to determine concentrations of paclobutrazol.

Samples of different concentration and container material combinations were physically arranged in a completely randomized design within each environment. Concentration of paclobutrazol was analyzed as repeated measures, unreplicated split-plot experiment (Lentner and Bishop, 1993) with environment as the unreplicated whole plot and container material as the replicated subplot. Significant main effects were determined using the general linear model procedure in SAS (version 9.3; SAS Institute, Cary, NC). Means were compared using Fisher’s protected least significant difference (lsd) test where α = 0.05. Means in Expt. 1 were also compared with the initial measured concentration using a t test. In Expt. 2, each mean was compared with the control concentration at each collection date using Dunnett’s test. 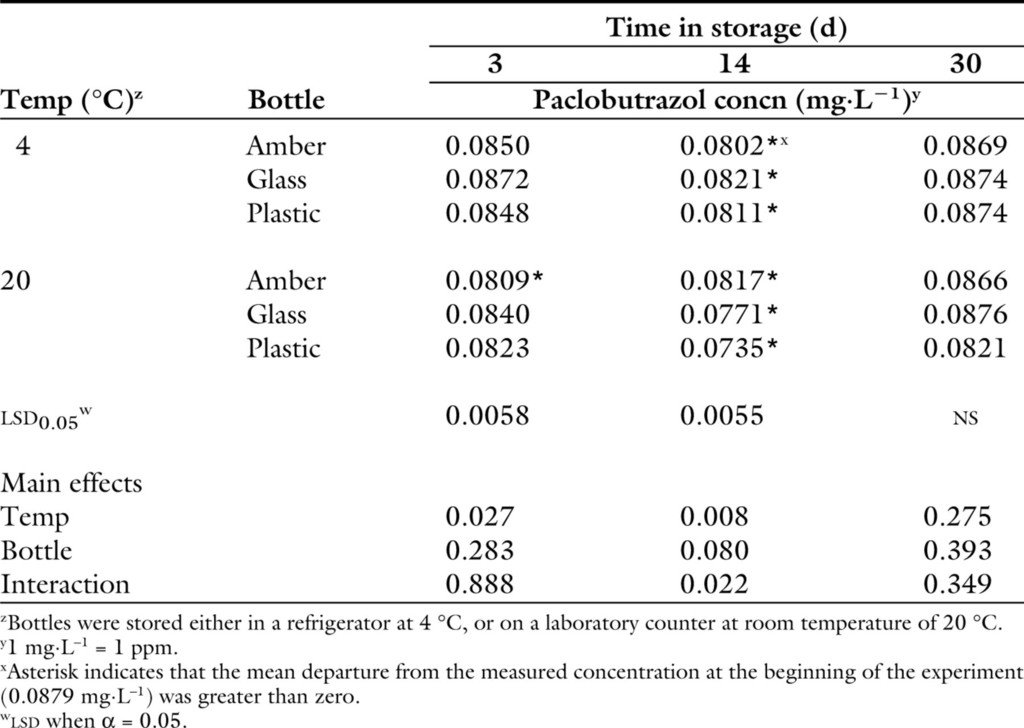 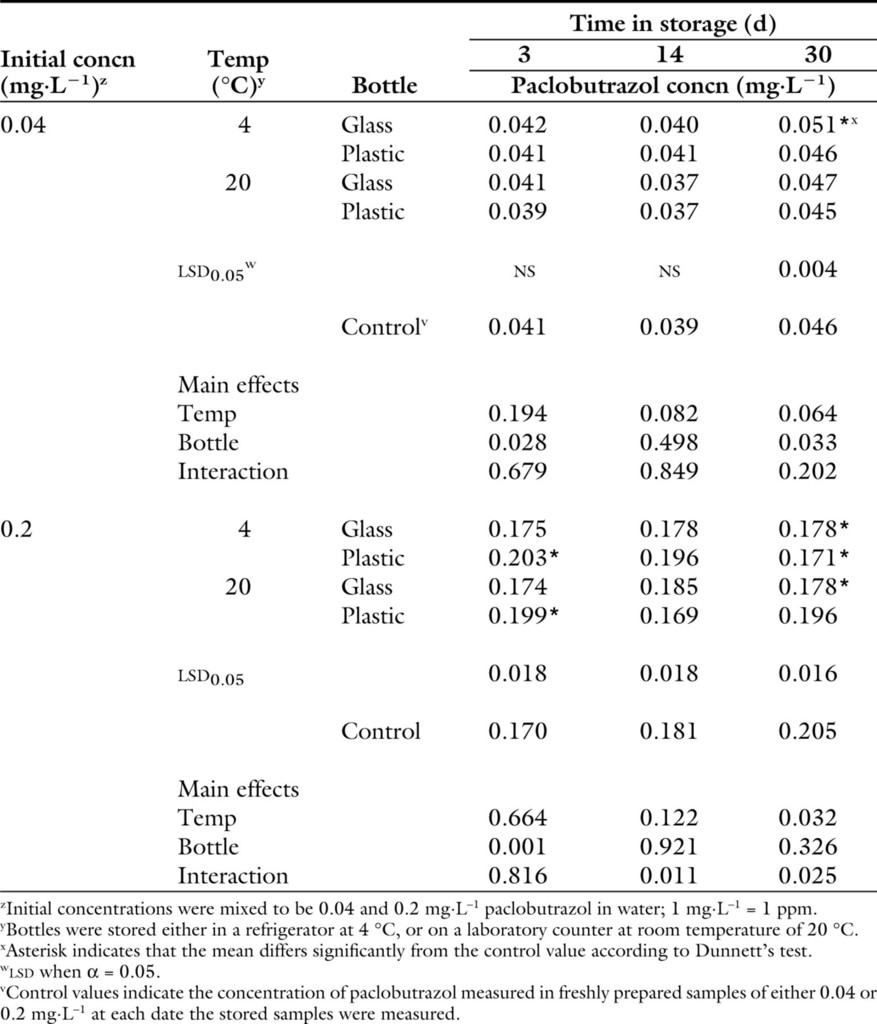 These data suggest that either glass or plastic containers are suitable for collecting greenhouse water samples for analysis of paclobutrazol concentration. Most growers customarily use plastic bottles for traditional water analyses (pH, EC, alkalinity, etc.), and these too can be recommended for collection of water samples for paclobutrazol analysis. These data also suggest that storage temperatures typical of a standard refrigerator (4 °C) or room temperature (20 °C) do not affect paclobutrazol concentration over a period of 30 d. Therefore, no special considerations for storage and shipping are necessary when sending samples to a laboratory for analysis. Our study used 20 °C for the highest storage temperature, however, it is conceivable that temperatures could exceed 20 °C during shipping and in the absence of further validation, packaging with an ice pack is recommended.

In conclusion, recirculated greenhouse water stored in tanks or ponds should be analyzed periodically throughout the year to determine if residual paclobutrazol concentration is sufficiently high to affect susceptible crops. For many greenhouse floriculture operations, this would be most important in the weeks following spring paclobutrazol applications to bedding plants and fall applications to chrysanthemums (Chrysanthemum indicum) or poinsettias (Euphorbia pulcherrima). Trace concentrations as low as 0.005 mg·L−1 applied via continuous irrigation are enough to stunt susceptible crops (Million et al., 1999). We recommend a water sample of 100 to 200 mL be collected in a new plastic bottle and shipped as soon as possible so that samples are analyzed within 30 d from the time of collection. Cold temperature during sample storage and shipping is not necessary, although it is recommended that safeguards are used to ensure temperatures do not exceed 20 °C.