Morphological characteristics, on the other hand, are often assessed relatively quickly and inexpensively in the field and generally require little or no laboratory analysis. Morphological characteristics that have been associated with improved wear tolerance across a variety of cool and warm-season turf species include internode length (Wood and Law, 1974), density (Shearman and Beard, 1975; Trenholm et al., 2000; Wood and Law, 1974), leaf angle (Wood and Law, 1974), leaf width (Shearman and Beard, 1975), and turf quality (Bonos et al., 2001).

The objectives of this research were to 1) assess the differences in leaf and canopy morphology and wear tolerance of four hybrid bermudagrasses and 2) assess the correlations between these morphological characteristics and wear tolerance. Findings from this research could provide hybrid bermudagrass turf breeders with a list of foliar morphological characteristics that are associated with wear tolerance to select for in new hybrids. Breeders could then use these parameters to identify potentially wear-tolerant experimental crosses before release, rather than wait for additional turf scientists to later conduct field traffic studies. Until recently, it has been more common for wear tolerance to be determined after a variety becomes commercially available, while breeders have selectively concentrated on other characteristics such as decreased mowing height, increased density, improved quality and color, and cold tolerance (Burton, 1966; Hanna et al., 1997).

Research was conducted from 23 Mar. to 1 June 2012 at two locations in Tifton, GA: the University of Georgia Coastal Plain Experiment Station and the Abraham Baldwin Agricultural College Woodruff Farm. Hybrid bermudagrasses were established vegetatively from sprigs in May 2009 on a loamy sand (Tifton-Urban land complex; pH = 5.3) at the Coastal Plain Experiment Station and in Apr. 2011 on a loamy sand (Tifton loamy sand; pH = 5.3) at the Woodruff Farm. Experimental design was a 2 × 4 randomized complete block design, with three replications. Factors included location and hybrid bermudagrasses. Hybrids included ‘Tifway’, ‘TifSport’, and ‘TifTuf’ as well as experimental varieties 04-76 established on 3 × 3 m plots.

Simulated traffic was applied over a 6-week period, from 23 Mar. to 27 Apr. 2012 at the Coastal Plain Experiment Station and from 27 Apr. to 1 June 2012 at the Woodruff Farm, using a traffic simulator [Baldree Traffic Simulator; University of Georgia, Tifton, GA (Kowalewski et al., 2013)]. The weekly traffic rate was two passes per week (one pass forward and one pass backward), for a total of 12 passes per location applied over 6 weeks.

Data were analyzed as a randomized complete block design, with three replications, using SAS (version 5.0; SAS Institute, Cary, NC). Mean separations were obtained using Fisher’s least significant difference (lsd) at a 0.05 level of probability (Ott and Longnecker, 2001). A series of regression analysis for various leaf morphology, density, and color parameters across the final percent green turf color observed at the conclusion of the 6-week traffic period were conducted to determine whether these parameters could project turf wear tolerance.

With respect to leaf angle, the four hybrids assessed ranged in values from 2.2 to 2.5 (Table 1), which indicates that these hybrid bermudagrasses have a semihorizontal orientation (22.5° to 45°) according to the scale developed by Brosnan et al. (2005). Brosnan et al. (2005) explored the effects of 12 different physiological characteristics, including leaf width and angle, on the wear of 173 varieties of kentucky bluegrass (Poa pratensis). They observed significant differences in leaf angle and concluded that this was the single most important parameter within the 12 assessed varieties when separating wear-tolerant and intolerant kentucky bluegrass varieties. Wear-intolerant kentucky bluegrasses possessed leaf angles ranging from 1.2 to 2.0, while wear-tolerant varieties ranged from 1.4 to 2.7. Considering conclusions drawn by Brosnan et al. (2005), the hybrid bermudagrasses in our research would all be considered wear tolerant according to leaf angle orientation.

The analysis of variance for NDVI revealed significant differences among the main effects of location and hybrid before the initiation of traffic, and no location × hybrid interaction was observed (Table 2). Normalized difference vegetation index values at the Coastal Plain Experiment Station were greater than values collected at Woodruff Farm. In reference to hybrids, ‘TifTuf’, ‘Tifway’, and ‘TifSport’ produced the greatest NDVI values (7.2, 7.0, and 6.8, respectively). Hybrid 04-76 produced the lowest NDVI value (6.5). Research conducted by Trenholm et al. (1999) determined that NDVI, as well as a number of reflectance indices, were highly correlated to shoot density; more specifically as NDVI values increased, so did shoot density. Trenholm et al. (1999) also determined that trafficked plots had lower NDVI values than untrafficked plots.

A significant location × hybrid interaction for DGCI before traffic was observed (Table 2), although regardless of hybrid, DGCI values at the Coastal Plain Experiment Station were greater than the DGCI values recorded at the Woodruff Farm location (a magnitude of response), indicating that this interaction was not important. Therefore, DGCI means over both locations are reported, with 04-76 producing the largest DGCI values, followed by ‘TifSport’, then ‘Tifway’, and finally ‘TifTuf’ (Table 2). Research by Karcher and Richardson (2003) did not observed differences in DGCI values between ‘Tifway’ and ‘Mini-Verde’ hybrid bermudagrass, or ‘Shanghai’ common bermudagrass; however, these varieties did produce DGCI values greater than Cardinal common bermudagrass. Research by Williams et al. (2010) found differences in DGCI of trafficked ‘Tifway’ and ‘TifSport’ on only one data collection date over a 2-year period. On this date, ‘Tifway’ produced a higher DGCI value than ‘TifSport’. This research also determined that ‘Tifway’ and ‘TifSport’ regularly produced lower DGCI values than the six other bermudagrasses (which included hybrid and common bermudagrasses) assessed.

Effects of location and hybrid bermudagrass variety on green turf color observed after 6 weeks of traffic (12 passes with a traffic simulator) at Tifton, GA in 2012.

Haselbauer et al. (2012) did not observe differences in turf color between ‘Tifway’ and ‘TifSport’ in the first year of their traffic study. It was only after 20 further traffic events were applied to the same plots in the 2nd year that ‘Tifway’ had more cover than ‘TifSport’. Trappe et al. (2011) observed no difference in green turf color between ‘Tifway’ and ‘TifSport’ hybrid bermudagrass when assessed in the summer and fall. They found ‘Tifway’ and ‘TifSport’ to be within the top category in three of the four data assessment dates, the exception being in the Fall 2008 assessment date during which ‘Tift No. 2’ was the only variety out of 42 to provide greater green turf color than ‘Tifway’. Goddard et al. (2008) determined that ‘Riviera’ common bermudagrass and ‘Tifway’ provided similar wear tolerance in transition zone climates (Arkansas and Tennessee), and were more wear tolerant than ‘Quickstand’ common bermudagrass. Williams et al. (2010) determined that ‘TifSport’ regularly produced higher percent green cover than ‘Tifway’ when under traffic stress in Florida. 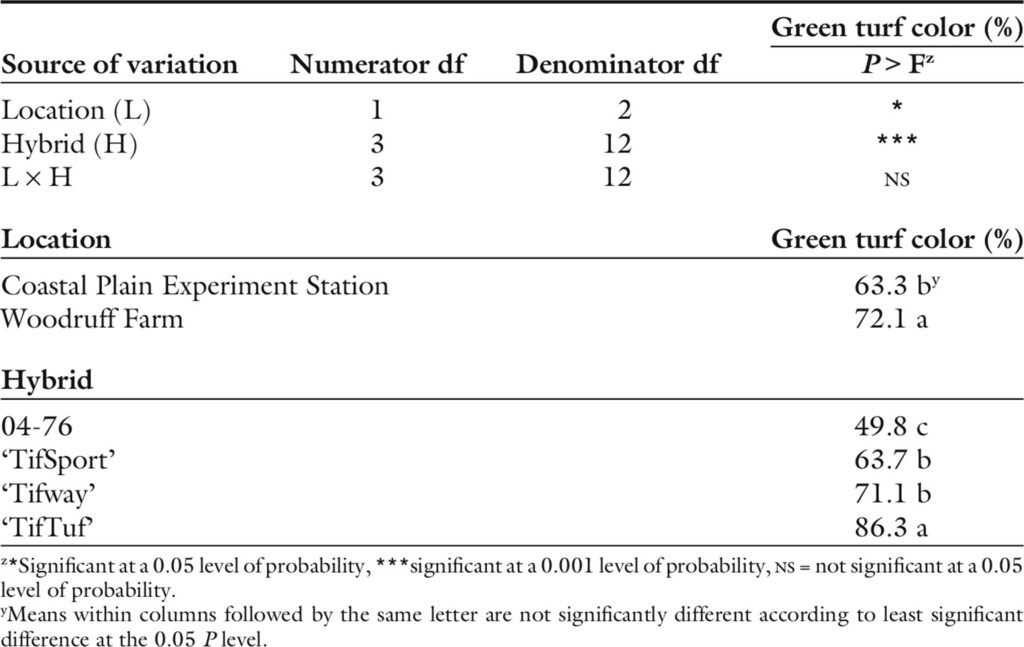 Contrary to these findings, Lulli et al. (2012) concluded that leaf dimension (width and thickness) of ‘Tifway’ bermuagrass, ‘Zeon’ zoysiagrass (Zoysia matrella), ‘Salem’ seashore paspalum (Paspalum vaginatum), and a cool-season mixture of 70% perennial ryegrass [Lolium perenne (35% ‘Speedster’ + 35% ‘Greenway’)] and 30% kentucky bluegrass (15% ‘SR2100’ + 15% ‘Greenknight’) was not related to wear resistance or recovery. However, they determined that ‘Zeon’ zoysiagrass had the thinnest leaves as well as the greatest wear tolerance within the grasses assessed. In this study, increasing leaf length and width resulted in decreasing green turf color after traffic. Percent green turf color before traffic was the only variable to be positively correlated to cover after traffic [R2 = 0.19 (Fig. 4)].

‘TifTuf’ provided the greatest wear tolerance, or percent green turf color, followed by ‘Tifway’ and ‘TifSport’ after 6 weeks of traffic. The experimental hybrid 04-76 had the poorest wear tolerance. Regression analysis findings suggest that DGCI, followed by leaf length, then leaf width, and finally percent green turf color before traffic are variables to consider when selecting or breeding hybrid bermudagrass for traffic tolerance. It is important to note that hybrids with greater DGCI (darker green) values, as well as longer and wider leaves resulted in reduced wear tolerance. These findings would also suggest that within the hybrid bermudagrasses assessed, leaf angle and NDVI are not correlated to wear tolerance. More research should be done in the future to screen a diverse set of hybrid bermudagrass lines for these characteristics to validate our conclusions. 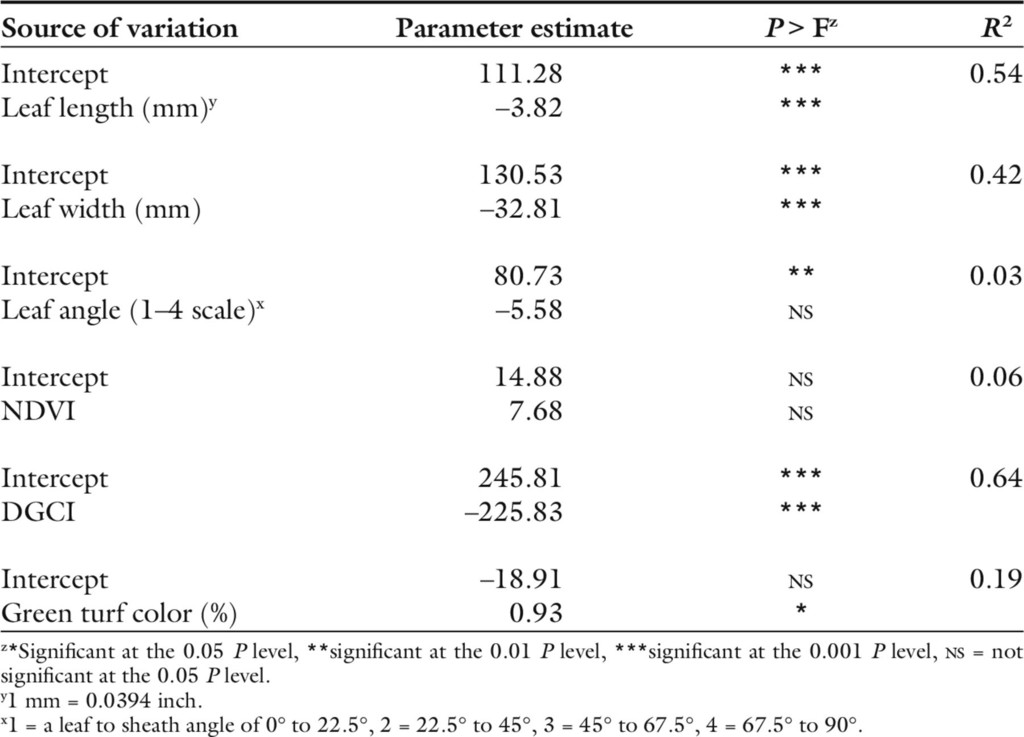 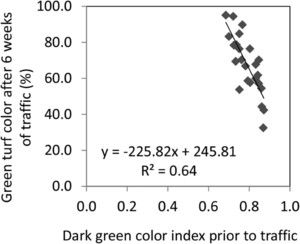 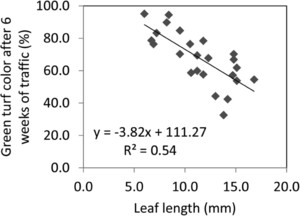 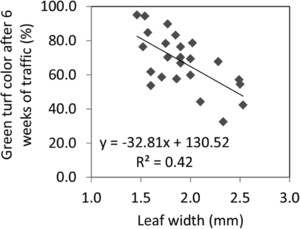 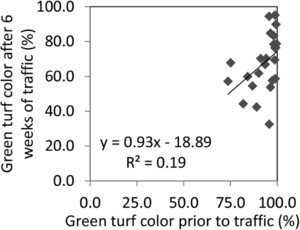