Most people around the world today live in urban areas and spend most of their time in urban spaces. The urban population in the United States was approximately 10.8% before the Industrial Revolution began in 1840, but it increased to 80.7% by 2010 (U.S. Census Bureau, 1990, 2010). The United Nations reports that 54% of the world’s population now lives in urban areas, and this number is expected to increase (United Nations, 2014).

Rapid industrialization and urbanization have produced a phenomenon in which contemporary citizens are living increasingly farther from nature (Nabhan and Trimble, 1994). This phenomenon is referred to as “nature deficit,” and the related disorder has resulted not only in mental problems such as depression or stress and physical health problems such as cardio-cerebrovascular disease, heart disease, diabetes, colorectal cancer, and osteoporosis but also in environmental pollution and climatic change in urban areas (Halverson et al., 2008; Lee and Maheswaran, 2011; Louv, 2008; McMichael, 2001).

Public gardens are considered leisure destinations like museums, parks, or zoos. According to a 2011 report about the leisure market in the United States, gardening was included among the top 10 leisure activities (Falk, 1998; Leisure Market Research Handbook, 2012), and the increase of gardening as a leisure activity has been associated with the increased numbers of visitors to public gardens (Connell, 2004, 2005). According to research on children’s preferences for leisure activities, however, children tend to prefer indoor activities, such as watching TV, reading, using a computer, playing video games or using other modern media (Cherney and London, 2006; Moore and Wong, 1997; Stenvall, 2009). The phenomenon in which children have more time to adapt to indoor lifestyles that are distant from natural environments has exacerbated health problems such as childhood obesity, asthma, attention deficit/hyperactivity disorder, and atopic dermatitis resulting from vitamin D deficiency (Mithal et al., 2009; Moore and Wong, 1997; Perrin et al., 2007; Taylor et al., 2001; Taylor and Kuo, 2009).

Because greater numbers of problems are arising for children who have less time to experience natural environments, environmental education researchers in the United States have been studying children’s gardens as places where children can improve their physical and mental health and sociability through the pleasure and play they experience in a natural environment encountered within a city (Halverson et al., 2008; Miller, 2005; Tai, 2006; Taylor, 1994).

Children’s gardens that are within public gardens and are equipped with opportunities for activities such as rest, leisure, and education have now been firmly positioned as alternative spaces that can help children become aware of natural environments. These spaces intrigue children at the appropriate level and aid in relieving various juvenile social problems resulting from nature-deficit disorder. Children’s gardens are places that all family members can engage and enjoy regardless of age [American Horticultural Society (AHS), 2005; Maller and Townsend 2006; Taylor, 1994]. Additional research on family leisure activities has reported that family-oriented leisure activities enhance family bonds and healthy relationships. The selection of leisure activities by young children is influenced by their parents (Hawks, 1991; Holder et al., 2009; Shaw and Dawn, 2001). Therefore, children’s gardens within public gardens not only allow for the rest, leisure, and education of children, but they also benefit the families who visit them.

The first children’s garden established in a public garden in the United States was the Brooklyn Botanic Garden, which was built in New York in 1914 to help educate children about gardening (Shair, 1999). With this garden as an exemplary case, children's gardens began to gradually spread throughout the United States (Stone, 1984; Trelstad, 1997). In 1993, the Michigan 4-H Children’s Garden was established at Michigan State University in East Lansing to teach children about the importance of plants, to induce curiosity, and to provide experiences of aesthetic richness while including many educational elements (Sobaski, 2006).

A list was compiled from the 12 sources and included a total of 776 places that met Rakow’s (2011) definition of a public garden (Fig. 1; Table 1), which states that “a public garden is a mission-based institution that maintains collections of plants for the purposes of education, research, conservation, and/or public display. It must have a system for maintaining plant records and professional staff, be open to the public and provide accommodations for access to all people.” The public gardens contained in the list were categorized into six different types, as defined by Rakow (2011): arboreta, botanic gardens, conservatories, display gardens, historic landscapes, and zoos.

Distribution of children’s gardens by state, as compiled from online surveys and lists of U.S. public gardens from 12 sources. 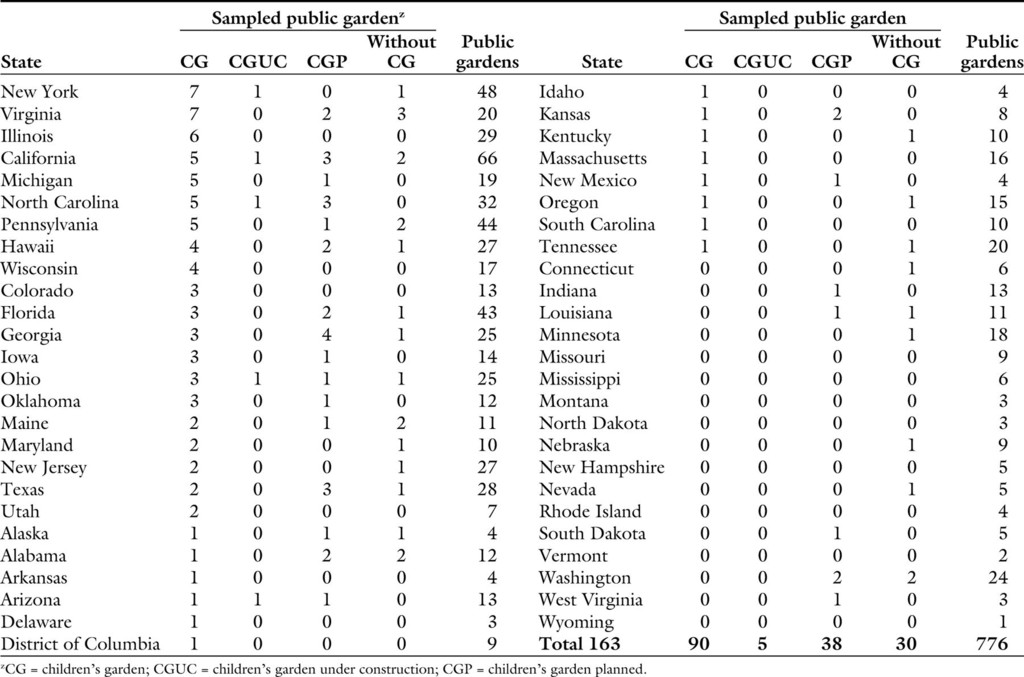 To investigate the presence of children’s gardens within the 776 listed public gardens, an online survey was conducted using Survey Monkey (2011) between July 2011 and Jan. 2012 by sending questionnaires to the education coordinators and horticulture directors at each of the 776 public gardens. In addition, the type of public garden represented by each garden was researched on each garden’s website (Table 2). The survey included questions regarding the presence of children’s gardens (Fig. 2; Table 1), their purpose (Table 3), their year of establishment (Fig. 3), and their size (Fig. 4) (see Supporting File). The size of each public garden and the year of its establishment were verified using each garden's website (Figs. 3 and 4). The number of news articles published about children’s gardens during 1990 and 2014 was determined by searching the term “children’s gardens” in Google (1998a) (Fig. 5). One hundred and sixty responses were collected from public gardens in 43 states. During July and Aug. 2014, a phone survey was performed to reconfirm the information received from the 163 public gardens that had responded to the online survey and to learn whether they were planning to build a children’s garden or were currently constructing one. The data were also examined through discussions, interviews and reviews with 17 colleagues across the academic (professor), public (garden director and director of institution), and private (landscape designer, and environmental educator) sectors of public gardening (Table 4).

Number of U.S. public gardens (PGs) and children’s gardens (CGs) within the six categories of PGs.

List of respondents from U.S. academic, public, and private sectors of public gardening examined through discussions, interviews, and reviews. 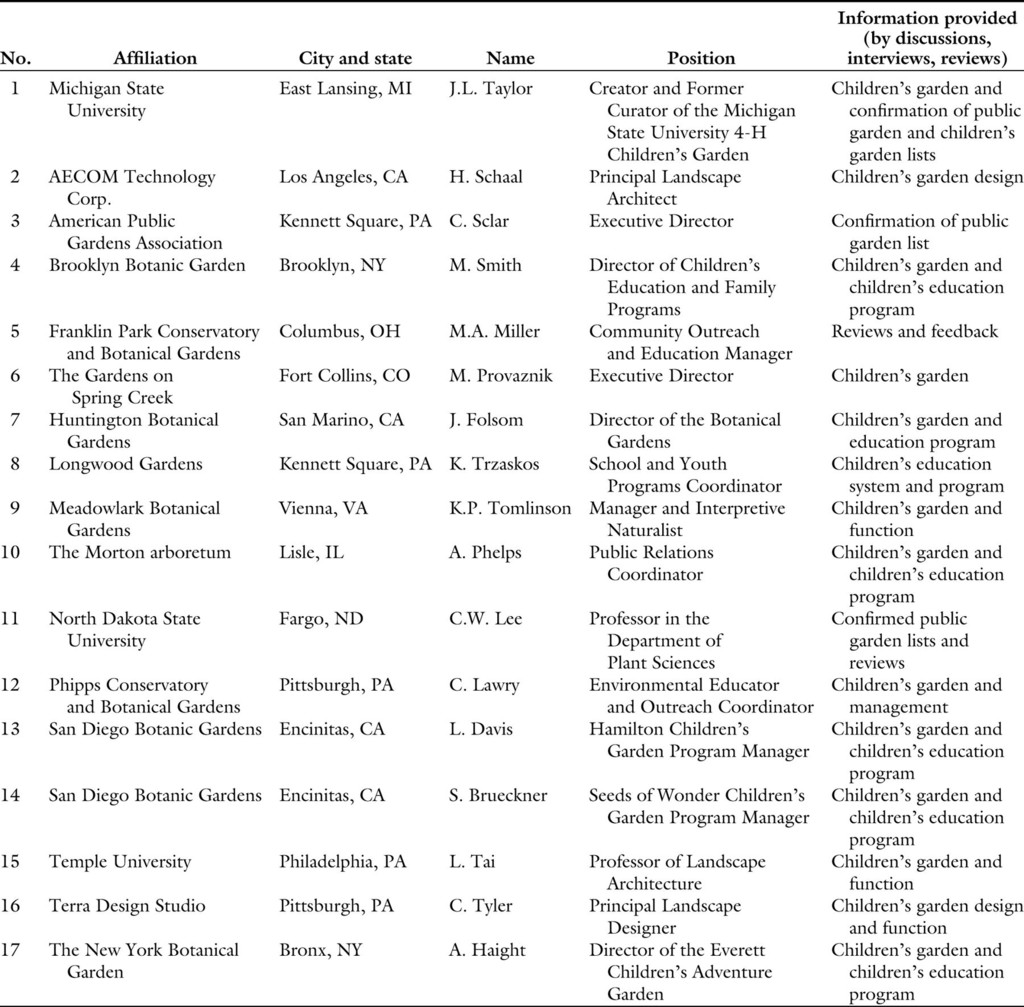 A t test was performed using data from the 2000 census to determine the factors that influenced the presence of children’s gardens within public gardens (Table 5) and the presence of public gardens (Table 6), including local populations, number of children (under 5 years old and 5 to 17 years old), education level (number of people with university degrees or higher), and economic level (per capita income), in the surveyed counties. All statistical analyses were conducted using SPSS (20.0 for Windows; IBM, Armonk, NY).

Relationship between the presence of children’s gardens (CGs) within U.S. public gardens at the county level and demographic and socioeconomic factors.

Relationship between the presence of U.S. public gardens (PGs) at the county level and demographic and socioeconomic factors based.

A spatial analysis technique based on geographic information system (GIS) was employed to analyze the density (Figs. 1A–B and 2B), geographical distribution (Fig. 2A) and area ratio of children’s gardens to public gardens in the United States (Fig. 4A). This study projected the location data of public gardens using Albers equal area conic projections after identifying their longitudes and latitudes using addresses. We used the spatial data to analyze the density of public gardens and to map county population density. All of the GIS analyses were conducted using ESRI ArcGIS 10.0 (ESRI, Redlands, CA).

The 163 surveyed public gardens were primarily located in the eastern and western regions of the country and had similar distribution and densities as the entire list of 776 public gardens (Fig. 2). A Pearson’s correlation test that was conducted to verify whether the distribution of the surveyed public gardens correlated to the total distribution of public gardens in the United States showed a statistically significant correlation (r = 0.723, P < 0.01). Therefore, the conclusions drawn from our study may be considered relevant to public gardens across the United States. Among the 163 public gardens that completed the questionnaire, 90 (55.2%) had a children’s garden as of 2014. Of the remaining respondents, 5 (3.1%) were currently in the process of building a children’s garden, and 38 (23.3%) were planning to open a children’s garden within a few years. The 30 remaining respondents (18.4%) had no children's gardens (Fig. 2). Taking into account children's gardens under construction and those in the planning phase, the number of public gardens with a children's garden will likely increase in the near future. In addition, the states with the most children’s gardens are in the eastern United States, such as New York (7) and Virginia (7), followed by those in the central region, such as Illinois (6) and Michigan (5), and those in the western part of the country, such as California (5) and Hawaii (4) (Table 1).

Among the surveyed public gardens, the ones with children’s gardens report that their main purposes are to provide children with an experience of the natural environment through play as an educational place (25.0%), to be an engaging place for families (22.7%), and to provide educational programs through experiential activities (15.9%). Other reported purposes include providing activities for summer camps to serve children of all physical and mental abilities and encouraging children to eat more vegetables (Table 3). This result is similar to the results of previous studies, which reported that the main purpose of establishing children’s gardens was to create a space for children to enhance their imagination and dreams by experiencing the natural environment while having fun (DiMare, 2012; Miller, 2005; Sobaski, 2006). The main purpose of children’s gardens has not changed; they have focused on providing natural experiences to children for the past decade.

Although fewer public gardens have been established since 2000 compared with the 1991 to 2000 period, our results show that the number of new children’s gardens continued to increase during the same period (Fig. 3A). This result is in accordance with previous research (Halverson et al., 2008), which found that the timing of children’s development was unsurprising as it coincided with increased attention to children’s environmental education and physical and cognitive development. In addition, most of the children’s gardens located within a public garden were established less than 20 years after the corresponding public garden was established (Fig. 3B).

According to the results of the online survey, children’s gardens serve as multifunctional places for urban children. They are spaces where children may visit with their families, enjoy and rest in a natural setting, or find an educational place to experience and explore nature as urbanization increases. The findings of this study may not represent the true status of children’s and public gardens because the data collection was primarily conducted using Internet searches and online surveys, which may have missed vital information. Further studies are needed to incorporate possible missing information and to better describe the status of children’s gardens, which are influenced by various socioeconomic and environmental factors.

With renewed public interest, the growth of children’s gardens in public areas is likely to continue. Further investigation is needed to characterize the changing status and role of children’s gardens and related activities at various public horticulture establishments in the United States. 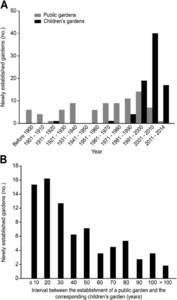 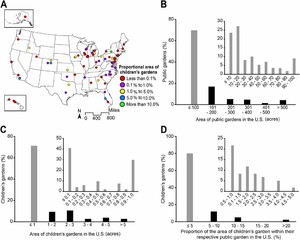 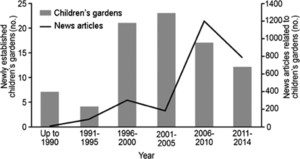