Basil is a popular genus in the mint family (Lamiaceae) with more than 30 species currently identified (Simon et al., 1999) and a constantly increasing number of cultivars (Paton, 1992). Basil species and cultivars vary widely in their characteristics, such as flavor, plant appearance, and architecture. There are several uses for basil, including essential oil production (Wogiatzi et al., 2011), use as an ornamental plant in landscapes (Morales and Simon, 1996), as a cut flower (Dole and Wilkins, 2005), and as a culinary herb (Simon et al., 1999). Among these different uses, basil is most commonly used as a culinary herb (Simon et al., 1999). Sweet basil is the most commonly cultivated basil species for culinary use, though lemon basil and holy basil are also produced for consumption and use in cooking (Juntachote et al., 2006; Morales and Simon, 1997).

Culinary basil can be grown outdoors or in controlled environments. Although the demand for fresh produce such as basil has increased (Wolf et al., 2005), year round production in colder climates is only possible in controlled environments. Research has been conducted on field production of basil (Sifola and Barbieri, 2006), but there are areas of hydroponic greenhouse basil production yet to be fully researched. There are several hydroponic systems frequently employed in greenhouse production of various food crops including dutch buckets, slab and bag culture, NFT, and DFT (Fenneman et al., 2013). The two most prevalent types of hydroponic systems used for leafy crops such as basil are NFT and DFT systems (Fenneman et al., 2013; Hochmuth and Cantliffe, 2014; Jensen, 2002; Morgan, 2005).

We have found no peer-reviewed research quantifying the growth of numerous basil species and cultivars produced in different hydroponic systems. Similarly, we have found no research comparing NFT and DFT systems for basil production. This comparison could be useful tool to aid hydroponic producer’s decision-making process. The objectives of our research were to quantify and characterize growth of basil species and cultivars grown in NFT and DFT hydroponic systems.

Seeds of 35 cultivars of basil, which represented several species, were obtained from several sources (Table 1). Although additional cultivars were available, we judged them impractical for commercial hydroponic use because of excessive compact growth, short stem length, small leaf size, and low productivity. 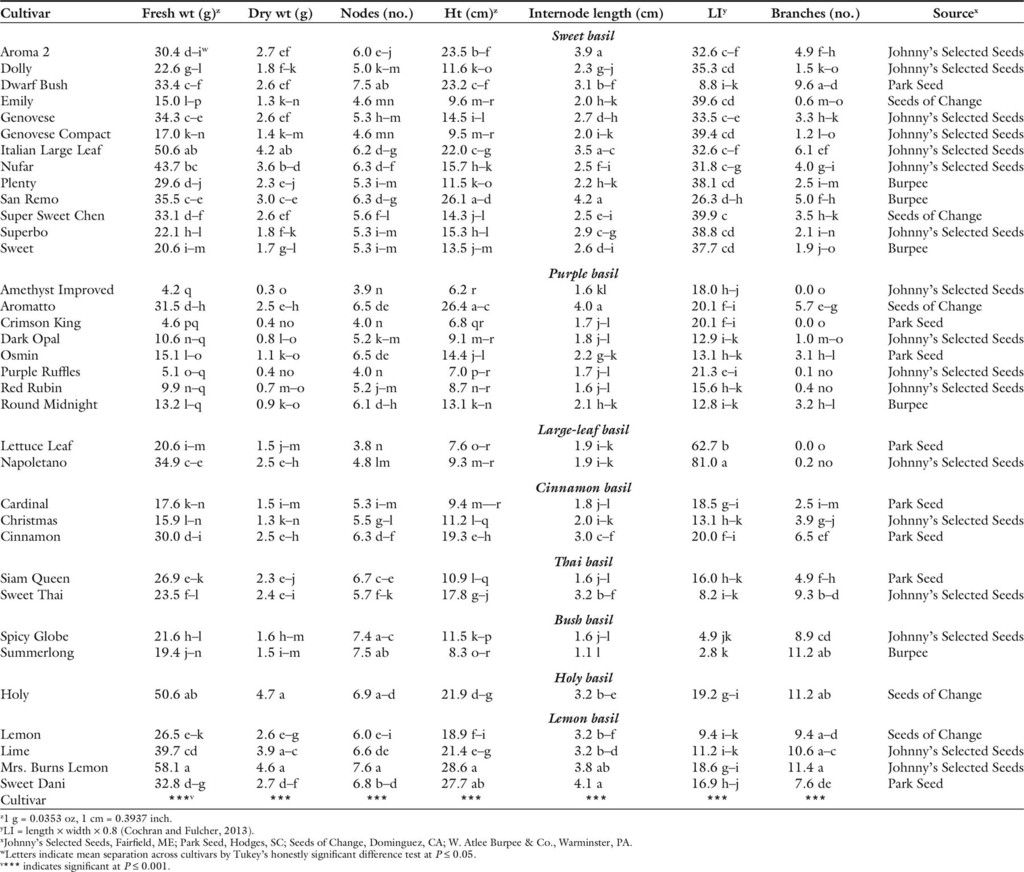 Two weeks after sowing, seedlings were transplanted into either NFT or DFT hydroponic systems. Each NFT system consisted of four troughs that were 4 inches wide, 2 inches tall, and 80 inches long (GT50–612; FarmTek, Dyersville, IA) with a 3% slope. Nutrient solution was held in a 40-gal reservoir (Premium Reservoir; Botanicare, Chandler, AZ) and was delivered to troughs with a submersible water pump (Active Aqua 33-W pump, Hydrofarm) resulting in a flow of ≈1 L·min−1 per trough. Plants were placed in 3.5-cm-diameter holes cut into the top of the NFT troughs allowing the base of the phenolic foam to rest on the bottom of the trough. The DFT systems consisted of a 3-ft-wide, 6-inch-tall, and 6-ft-long tray with a 60-gal capacity (3 × 6 ID Tray White, Botanicare) and a 1.5-inch-thick polystyrene foam sheet floating on the nutrient solution. Baskets were placed in 3.5-cm-diameter holes in the polystyrene foam, and seedlings were placed in the baskets so the phenolic foam was in contact with the nutrient solution. In both systems, plants were spaced 8 inches apart. Each system contained one plant of each of the 35 cultivars.

When the majority of plants were harvestable (4 and 3 weeks after planting for Runs 1 and 2, respectively), growth was assessed. Height of the main stem and node number were recorded to determine average internode length (height ÷ node number). Number of branches (>2.5 cm) was counted and the width at the widest point and length of the second most mature leaf was measured. Leaf index (LI) was calculated by using the formula for area of an ellipse (LI = length × width × 0.8) (Cochran and Fulcher, 2013). Plants were severed at the surface of the foam cubes and fresh weight was immediately recorded. Shoots were weighed after drying in a forced-air oven maintained at 67 °C for 3 d.

Each experimental run was organized in a randomized complete block design in a factorial arrangement with 10 hydroponic systems (replicates) per system type with one plant per cultivar in each replicate system. Factors were hydroponic system (2 levels) and cultivar (35 levels). Analysis of variance and mean separation by Tukey’s honestly significant difference test at P ≤ 0.05 were performed on all data by using JMP (version 11; SAS Institute, Cary, NC). The experiment was run twice.

For both experimental runs, growth and development were affected by either cultivar or hydroponic production system, but not the interaction between production system and cultivar (Tables 3 and 4). There was no difference between basil grown in NFT and DFT systems in the first run of this experiment (Table 3). In the second run, production system had no effect on node number, LI, or branch number (Table 3); however, fresh weight, dry weight, and height of basil grown in DFT systems was 2.6 g, 0.2 g, and 0.8 cm greater, respectively, compared with plants in NFT systems (24.4 g, 2.0 g, and 14.6 cm, respectively) (data not shown). 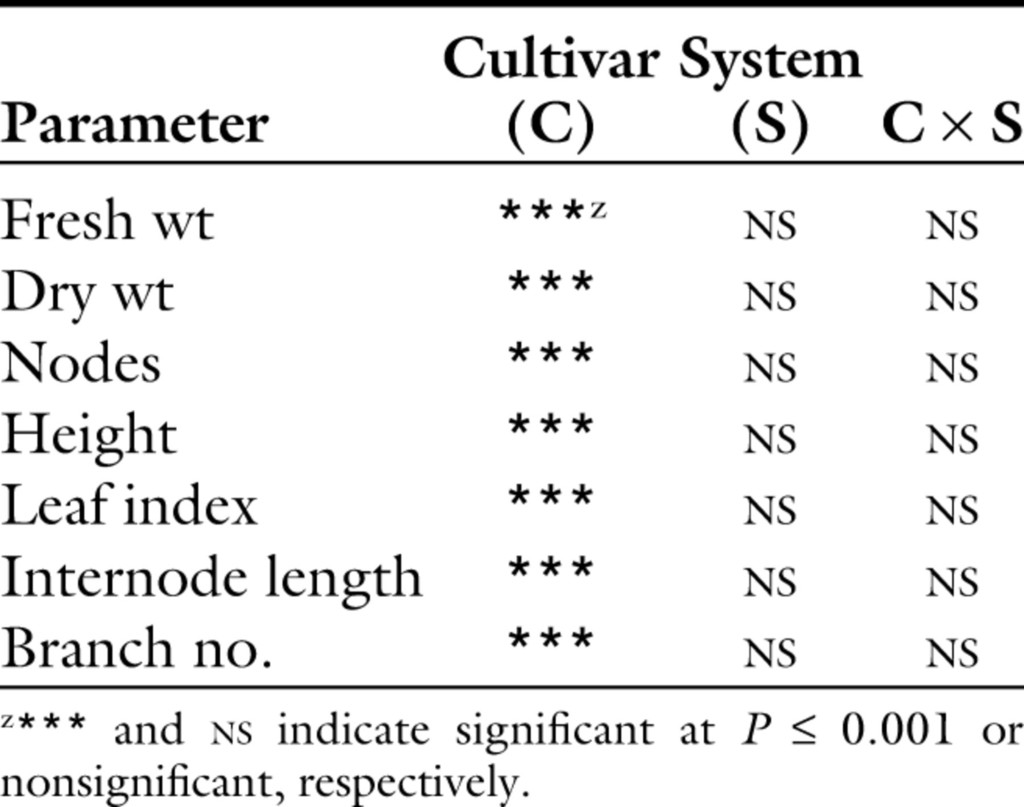 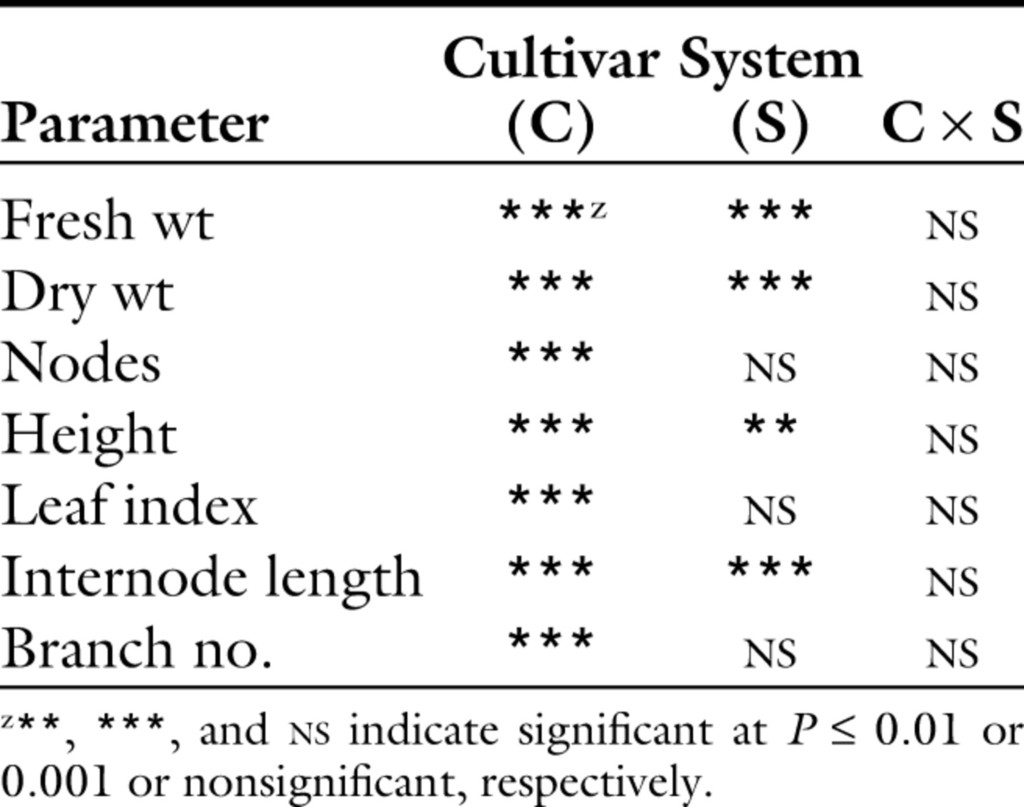 For both runs, cultivar affected each parameter of growth and development measured (Tables 3 and 4). The trends across cultivars were similar between runs; for clarity, we present results from the second run. Fresh weight varied from 58.1 g (‘Mrs. Burns Lemon’) to 4.2 g (‘Amethyst Improved’) (Table 1). Sweet basil cultivars had the greatest variability in fresh weight ranging from Emily (15.0 g) to Italian Large Leaf (50.6 g) (Table 1). Nearly every purple basil cultivar had lower weight when compared with sweet basil with weights ranging from 4.2 to 31.5 g. Most thai, cinnamon, and bush basil had similar fresh weights, with ‘Cinnamon’ being the heaviest at 30.0 g and ‘Christmas’ the lightest at 15.9 g. For lemon basil, ‘Mrs. Burns Lemon’ produced the greatest fresh weight (58.1 g), whereas ‘Lemon’ produced the least (26.5 g). Trends in dry weight were similar to that of fresh weight. Dry weight varied from 4.7 g (‘Holy’) to 0.3 g (‘Amethyst Improved’).

The most common types of hydroponic systems used for leafy crop production are NFT and DFT systems (Fenneman et al., 2013; Hochmuth and Cantliffe, 2014; Jensen, 2002; Morgan, 2005). However, we have found little published information directly comparing DFT and NFT for leafy crop production. Lennard and Leonard (2006) reported that DFT systems produced 0.34 kg·m−2 more lettuce (Lactuca sativa) than NFT systems in aquaponic production. In the first run of this experiment there were no differences in plant growth between NFT and DFT systems (Table 3), whereas in the second run there was a small difference in fresh weight for plants grown in the two systems (Table 4). The few differences in basil growth between the two systems, when taken along with other aspects, may not be commercially significant to producers. Hydroponic production systems should be chosen based not only on plant growth but also on factors such as usability and input requirements.

One of the advantages of NFT systems is the reduced volume of nutrient solution required relative to the area of plant production. This reduces the energy required to heat the nutrient solution in the winter months if desired (Thompson et al., 1998). In addition, troughs in NFT systems are usually placed at heights that are comfortable for greenhouse employees to access for transplanting and harvesting. Disadvantages include the possibility of increased leaking due to more extensive plumbing and the constant reliance on pumps for water supply; although recirculation and agitation of the nutrient solution is also advantageous in that it may help oxygenate the water (Frantz and Welbaum, 1998). Although the DFT systems used in this study each contained a single raft, DFT systems commonly have multiple polystyrene foam sheets floating on the nutrient solution surface forming a raceway. The nutrient solution in DFT systems creates a near frictionless conveyor belt for the floating rafts (Jensen and Collins, 1985). In DFT systems, plants can be transplanted at one end of the raceway and harvested at the other end, thus reducing labor costs. Also, pumps are not required to provide nutrient solution to plants. With less extensive plumbing than a NFT system, the location of plants is not at a level comfortable for greenhouse employees. A NFT system may be more useful for crops requiring more access, such as fresh cut herbs with successive harvests, whereas a DFT system may be more useful for crops with a single harvest. The decision of which type of hydroponic production system to employ should be based on plant growth and functionality of systems.

Though not quantified in this study, one of the first considerations in selecting basil cultivars for production is the desired flavor of the crop. The distinctive basil flavor is characterized by aroma compounds (Simon et al., 1999) including linalool, a compound found in nearly every species of basil, along with other aroma compounds. For example, the flavors of sweet, large-leaf, purple, and bush basils partially come from methylchavicol and 1,8-cineole, while thai, cinnamon, and lemon basil have higher methylchavicol, methylcinnamate, and citral content, respectively. Unlike other basil cultivars in this experiment, the major aroma compound in holy basil is β-caryophyllene, not linalool, giving it a unique flavor.

Hydroponic basil producers may want to select basil cultivars with certain growth or morphological characteristics in addition to flavor and yield (Table 1). These factors influence the structure of a plant. Cultivars that are tall with long internode lengths and small LIs may tend to fall over during production, whereas short cultivars with high branching and small internode lengths and LIs may be stable and well suited for potted production. A combination of these factors is used in selecting cultivars for hydroponic production. A plant that can stand upright with a large leaf to stem ratio is ideal whether the plant has few large leaves or many small leaves. For example, ‘Aromatto’ and ‘San Remo’ were tall with long internode lengths and fell over throughout production. Alternatively, bush basil cultivars were highly branched and compact with small leaves, resulting in a plant better suited for production and marketing in containers than fresh-cut hydroponic herb production. Although cultivars such as ‘Italian Large Leaf’ and ‘Mrs. Burns Lemon’ were tall, they had shorter internode lengths and either greater branching or larger leaves resulting in a plant well suited for hydroponic production. This study used a single harvest production scheme. Morphological characteristics, such as branching, may differ in production schemes were shoots are harvested multiple times.

In addition to the parameters measured, some cultivars have other unique characteristics that may be desirable to producers. For example, ‘Cardinal’ has a lower fresh yield, but was selected for its ornamental flowers (Dudai et al., 2002). In addition, ‘Nufar’ not only produces greater yields than most cultivars studied, but is also resistant to fusarium wilt (Fusarium oxysporum f.sp. basilicum), a common problem in basil production (Dudai et al., 2002). This comprehensive review of cultivars in hydroponic systems facilitates cultivar selections that fit the goals of the grower.

Though there are differences between NFT and DFT systems, cultivar has a larger impact on the fresh yield of basil. Therefore, hydroponic basil producers should choose production systems not only on yield but also on operational preferences, although cultivars should be selected based on flavor, habit, and yield. Production system and cultivar performance may vary across different locations, greenhouse environments, and cultural practices. Growers are urged to conduct on-site trials to determine performance under their production practices.