Ethephon is a plant growth regulator (PGR) that is commonly applied as a foliar spray (Whipker et al., 2011b). When absorbed by plant tissue, the change in tissue pH causes ethylene gas to be generated within plant cells (Barrett, 2001). As a PGR, ethephon has several effects when applied to containerized ornamental crops (Barrett, 2001; Whipker et al., 2011b). Ethephon may act as a plant growth retardant and minimize stem elongation by reorienting microfibril orientation in cell walls; this causes cells to expand laterally and minimize elongation, which restricts stem height or length. Additionally, ethephon may be employed to increase branching in crops by increasing the ratio of ethylene : auxin, which diminishes apical dominance and releases axillary buds, resulting in enhanced lateral branch development. However, one of the most common uses of ethephon is to delay flowering for vegetatively propagated ornamental flowering crops (Dole and Wilkins, 2005). Flowering delay of vegetatively propagated material is generally desirable to extend the vegetative phase of production (i.e., growth of leaves) to increase the size or “bulk up” a containerized crop and reduce the disease pressure posed by senesced flowers.

We have found no published information on effective concentrations of ethephon for foliar spray applications on streptocarpus to inhibit or delay flowering. The objective of our experiment was to quantify the impact of foliar ethephon applications on the growth and flowering of tissue culture–propagated ‘Ladyslipper’ streptocarpus.

The time to flower from planting was calculated as the number of days from transplanting until the first flower on a plant opened, and the total number of inflorescences each plant produced was recorded throughout the study. The recommended production time for ‘Ladyslippers’ streptocarpus is 12 to 14 weeks (Uhl, 2012); therefore, we collected final data 13 weeks after planting. Plant height from the surface of the substrate to the tallest growing point and the widths at the widest point and 90° from the widest point were recorded. These measurements were used to calculate the GI (GI = {plant height + [(diameter 1 + diameter 2)/2]}/2), an integrated measurement of plant size (Jeong et al., 2009; Krug et al., 2010).

The experiment was conducted in a completely randomized design with 10 replications (individual plants) for each treatment. Regression analyses across ethephon concentrations within application and pairwise comparisons between all treatments using Tukey’s honestly significant difference test at P ≤ 0.05 were performed using SPSS (version 21.0; IBM Corp., Armonk, NY). 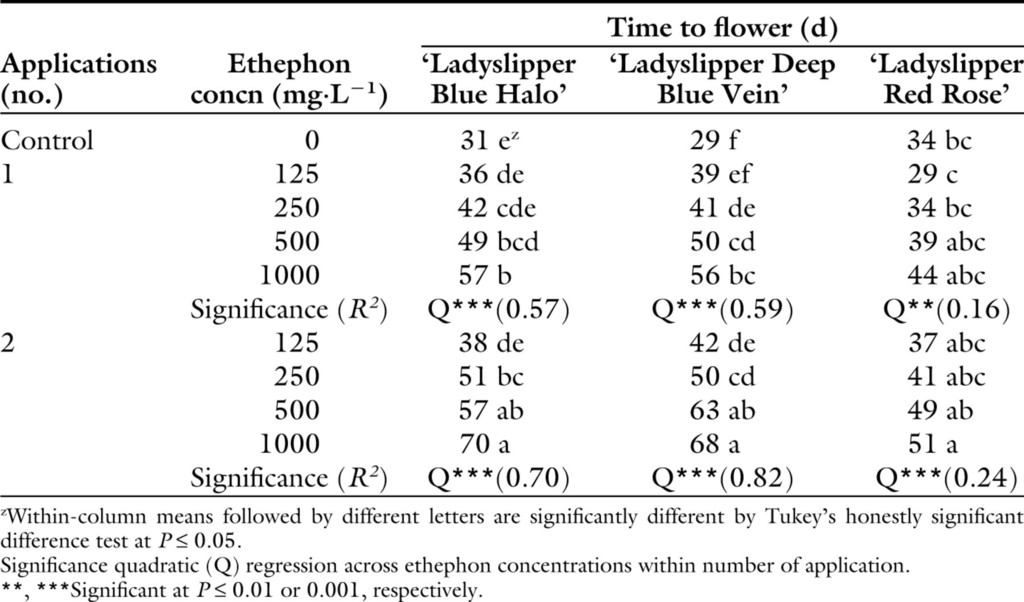 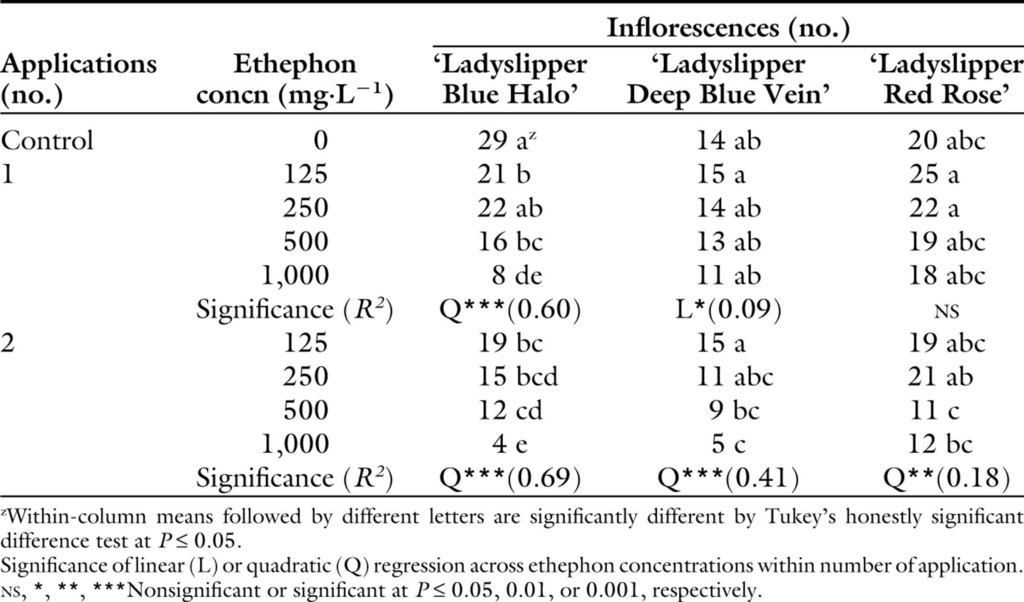 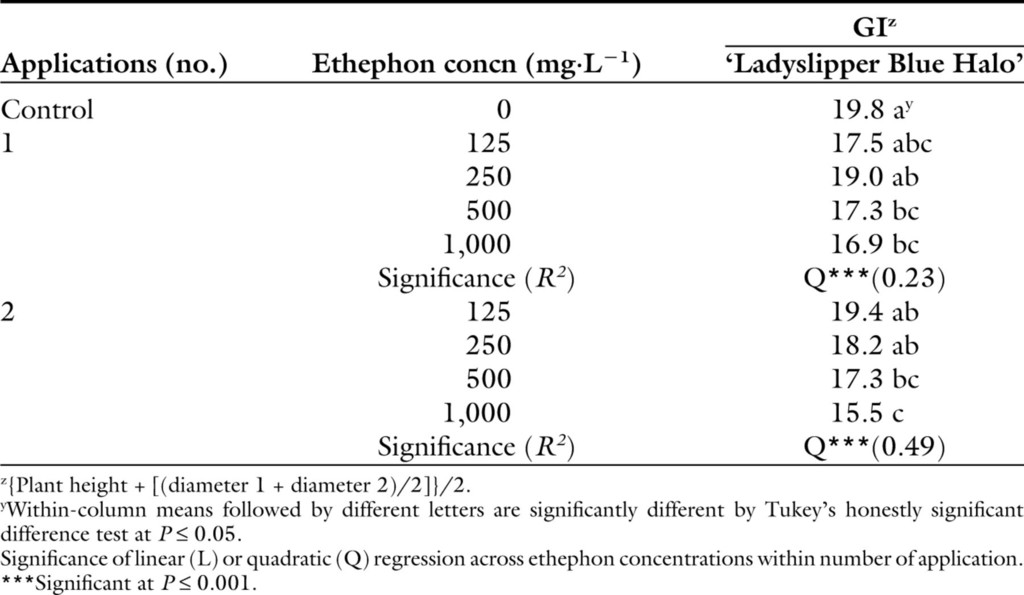 Starman et al. (2004) applied foliar sprays containing 500 or 1000 mg·L−1 ethephon to 27 different vegetative annuals. Ethephon application resulted in fewer flowers for 16 of the 27 species treated, though the magnitude of effect varied across species as well as among cultivars within a species. For example, although flower number of ‘Colorburst Red’ calibrachoa (Calibrachoa ×hybrida) was unaffected by ethephon, foliar sprays containing 1000 mg·L−1 ethephon applied to ‘Liricashower Rose’ calibrachoa resulted in 47 fewer flowers per plant compared with untreated plants. In another study, Starman and Williams (2000) reported that spraying 500 or 1000 mg·L−1 ethephon solutions on common fanflower (Scaevola aemula ‘New Wonder’) delayed flowering by 8 or 11 d, respectively, compared with control plants. Plant width was also suppressed by up to 77% compared with control plants when ethephon was applied.

The GI of each streptocarpus cultivar was affected differently by ethephon applications (Table 3). Increasing the concentration of ethephon up to 1000 mg·L−1 suppressed the GI of ‘Ladyslipper Blue Halo’ by 15% for a single application (R2 = 0.23) and 22% for multiple applications (R2 = 0.49). Alternatively, ethephon did not affect the GI of ‘Ladyslipper Deep Blue Vein’ or ‘Ladyslipper Red Rose’ (data not shown). Though the GI was less for ‘Ladyslipper Blue Halo’ plants treated with ethephon, even the plants most affected by ethephon were still marketable. We believe that streptocarpus flowers are not significant sinks during production, since we observed little difference in GI regardless of flower number. Therefore, using ethephon to prolong the period of vegetative growth may be more useful to improve crop sanitation than for reallocating carbohydrates to vegetative growth instead of flower production.

We observed no phytotoxic effects of ethephon applications, aside from flower bud abortion. However, in a few instances, we observed two or three leaves growing on the terminal end of a peduncle of the inflorescence or phyllady. This was not widely observed across all ethephon treatments, including ethephon concentration and number of applications, or cultivars (data not shown). This phenomenon only occurred on plants treated with ethephon.

While the use of ethephon on flowering annual and perennial bedding plants has been reported, we found no reports of the effect of ethephon on the growth and flowering of streptocarpus. However, Callesen and Adriansen (1983) and Miller (2005) studied the impact of ethephon foliar sprays on growth and flowering of sylvan seemannia (Seemannia sylvatica) and achimenes or hot water plant (Achimenes hybrids), which are other plants in the family Gesneriaceae. Callesen and Adriansen (1983) quantified the response of sylvan seemannia to foliar applications of solutions containing 0, 1000, 2000, 4000, 8000, or 16,000 mg·L−1 ethephon. Plants treated with 1000 mg·L−1 ethephon flowered 4 to 6 weeks later than untreated plants, while plants treated with 16,000 mg·L−1 ethephon flowered 14 weeks later. Additionally, height of sylvan seemannia was increasingly shorter than untreated plants as ethephon concentration increased. Miller (2005) applied solutions containing 0, 250, 500, or 1000 mg·L−1 ethephon one, two, or three times to achimenes ‘A09’, ‘A16’, and ‘A23’. The percentage of plants flowering at the end of the experiment ranged from 93% to 51%. Untreated plants flowered 7 weeks after treatments were initiated, while flowering of achimenes treated with 500 or 1000 mg·L−1 ethephon three times was delayed up to 11 weeks compared with untreated plants.

We estimated the PGR cost for a foliar application of solution containing 1000 mg·L−1 ethephon applied at 0.5 gal/100 ft2 using PGRCALC (Krug and Whipker, 2010). Using the average price for the cost of a commercial ethephon product it would cost $10.23 per spray application per 1000 ft2 of bench space. Based on these calculations, we believe that the PGR and application labor costs associated with applying ethephon to prevent premature flowering are minimal when compared with the potential labor costs to manually remove flowers for ≈4–5 weeks while plants are growing to a marketable size.

Ethephon applications delay streptocarpus flowering while having a minimal impact on the quality of finished, marketable plants. Based on our research, applying foliar sprays containing 1000 mg·L−1 ethephon aid delaying flowering of ‘Ladyslipper’ streptocarpus cultivars and, therefore, minimize the use of hand labor for removing flower stalks before plants have reached a marketable size. Greenhouse producers will want to perform trials to evaluate the effectiveness of ethephon sprays with streptocarpus cultivars they use under their specific greenhouse environment and culture.