Large-scale container-grown nursery plant production began in the early 1950s and helped to diversify the nursery industry. Most of the clay, recycled metal, and wooden containers initially used in nurseries were replaced by plastic containers in the 1960s, and container production systems became more abundant because of ease of transplanting and year-round production and/or sales (Davidson et al., 1988). Plastic has remained as the most common material for nursery containers but due to economic and environmental considerations such as price fluctuations, high collection and sanitation costs, and chemical contamination concerns; used plastic containers are primarily disposed of in landfills (Garthe and Kowal, 1993; Hall et al., 2010; Helgeson et al., 2009) and given limited access to recycling centers enhanced interest in alternative containers (Fulcher et al., 2013). Green industry stakeholders (i.e., nursery, greenhouse, and landscape professionals) have identified the use of plantable, compostable, or recyclable containers as an alternative way to improve the sustainability of current production systems (Nambuthiri et al., 2015).

Container materials and colors can affect plant growth by modifying substrate temperature and the water budget (Markham et al., 2011). Heat energy enters the production system from direct and reflected solar radiation. Containers act as a solar collector in the system, as does the exposed substrate surface (Martin and Ingram, 1992). Excessive substrate heating occurs due to absorption of solar radiation and lack of heat dissipation from the nonporous black plastic containers (Beattie et al., 1987). These conditions will result in changes to the root environment and may influence plant growth and productivity. A major concern for growing plants under full sun in plastic containers is the substrate temperature, which can injure roots if it exceeds 40 °C for several hours (Mathers, 2003; Ruter and Ingram, 1990). Heat is transferred to the substrate in the container primarily through conduction and lost to the external environment via convection. Martin and Ingram (1992) developed simulation models to study substrate temperature and found that properties such as color, porosity, reflectivity of container surface (albedo), thermal conductivity of the container, thermal exchange between the container sidewall and the growing substrate, and the surrounding environment can influence substrate temperature.

One way to deal with heat stress is to use containers with porous walls to allow evaporation of water from the outer surface, improving heat exchange between the substrate and environment (Bunt and Kulwiec, 1970). Container material composition has been found to influence substrate heat development because of the differing thermal properties of the components (Bunt and Kulwiec, 1971). Any material that reduces absorption of solar radiation and increases exchange of heat in the production system can contribute to reducing supraoptimal substrate temperature. Porous containers (clay, paper, peat, etc.) showed a slower increase in substrate temperature than nonporous (plastic, glass, paraffin-protected, etc.) containers due to the higher latent heat for vaporization of water (Jones, 1931).

Green industry stakeholders have identified the use of biodegradable container alternatives as a way to improve the sustainability of current production systems (Behe et al., 2013; Dennis et al., 2010; Hall et al., 2010). An online survey showed that consumers were willing to pay a premium for compostable, plantable, and recyclable containers due to their pro-environmental attributes (Khachatryan et al., 2014). Recently, several alternative containers made from WP, paper, coir, rice hulls, peat, bioplastic, recycled plastic have become commercially available (Hall et al., 2010; Nambuthiri et al., 2015) and have been recently evaluated for their suitability for a variety of species and environmental scenarios (Evans and Hensley, 2004; Lopez and Camberato, 2011; Nambuthiri and Ingram, 2014).

This study evaluated the impact of container material on substrate temperature dynamics and sidewall evaporative water loss under laboratory, controlled environment, and in aboveground nursery settings.

The study was conducted at the University of Kentucky, Lexington, to evaluate the heat flux and substrate temperature as affected by container material. Four types of 1-gal nursery containers with similar container height and diameter were evaluated with five replicates per container type. They included 1) conventional black plastic containers [Plastic (C400; Nursery Supplies, Orange, CA)] and alternative containers, 2) wood pulp [WP (7X7RD; Western Pulp Products Co., Jacksonville, TX)] made from wood pulp, 3) keratin [KR (Horticultural Research Institute, Washington, DC)] made from a chicken feather-based bioplastic, 4) a black fabric container [FB (Root Pouch, Hillsboro, OR)] made from recycled plastic, and 5) coir fiber [Coir (Retail Nursery Pot, Markham, ON, Canada)]. The experiment was conducted under standard laboratory conditions with an ambient air temperature of 19 ± 0.5 °C. The containers were filled with equal volumes of an 85% pine bark:15% Sphagnum peat (v/v) substrate. The substrate was wetted to saturation, mixed thoroughly and allowed to drain before filling each container. The containers were permitted to equilibrate to room temperature for 30 min before initiating the experiments. Two incandescent (100 W each) bulbs, ≈1 inch apart from each other in a tandem fixture were placed 6 inches away from the container sidewall to provide heating for 90 min. After 90 min, total radiation flux density reflecting from the container wall was measured using a pyranometer (LI-200; LI-COR Biosciences, Lincoln, NE) connected to a data logger (LI-1400, LI-COR Biosciences). After turning the light off, the temperature of the container wall was measured using an IR thermometer (model 42510; Extech Instruments, Nashua, NH) aimed ≈3 inches away from the wall. The wall temperature was measured at 2, 6, and 10 inches, respectively, below the container rim and average wall temperature was calculated. Temperature at 1-inch depth of the substrate was measured using a digital thermometer (Fisher Scientific, Pittsburgh, PA) at 1 inch from the container wall and at the center of the container (2 inches from the container wall).

Substrate water loss from each type of container was evaluated in a controlled environment chamber with temperature and humidity control (model J4S-5580A; Parameter Generation and Control, Black Mountain, NC). The four container types were filled with equal quantities of 85 pine bark:15 Sphagnum peat (by volume) substrate mix (Renewed Earth, Kalamazoo, MI). Substrate physical properties were as follows: 89.9% total porosity, 30.7% available water, 30.6% unavailable water, 28.6% air space, and 0.16 g·cm−3 bulk density. The substrate was wetted to saturation, mixed thoroughly, and allowed to drain before filling each container. The containers were permitted to equilibrate to room temperature for 30 min before initiating the experiments. An air temperature of 32 °C and relative humidity of 45% was maintained inside the control chamber to provide a vapor pressure deficit (VPDair) of 2.6 kPa inside the chamber. The chamber air conditioning system was able to successfully maintain VPDair as expected (Fulcher et al., 2011). Containers were either sealed at the top using plastic wrap, and drainage holes were sealed using wax to allow loss of water only through the wall or the containers were not sealed to allow evaporative water loss through both top and sidewall. Container weight was recorded hourly for 8 h until there was no significant weight change. Hourly and cumulative evaporative water loss over 8 h was calculated. There were five replicates for each type of nursery container. In biocontainers like WP, the initial temperature and water vapor values observed with new containers under laboratory conditions might not reflect their properties in older weathered containers in the field.

‘Green Velvet’ boxwood in 2012 and ‘Dark Knight’ bluebeard in 2013 were planted in the 1-gal container types as previously described. The species were selected that would grow over the large variation in climates seen among the study locations and plants that would normally be grown in a 1-gal container. The containers were filled with equal quantities of an 85 pine bark:15 sphagnum peat (v/v) substrate. This one-factor, completely randomized design experiment with three replicates per container type was undertaken from June to Oct. 2012 and May to Oct. 2013. There were 30 plants for each container type arranged in a single block at a 1-ft spacing on-center with guard rows surrounding all treatment plants. Two containers on the south side of the block were evaluated for temperature and data were collected from three replicated blocks. Two thermocouples (Type T copper-constantan thermocouple wires; Omega Engineering, Stamford, CT) or thermistors (107-LC; Campbell Scientific, Logan, UT) in each plot measuring substrate temperature were placed in the container at 1 inch below the substrate surface and at 1 inch from the south-facing side. Data were recorded using a data logger (CR1000, Campbell Scientific) programmed to scan every 30 s and to determine hourly maxima, minima, and average.

Substrate moisture levels were measured and controlled using dielectric capacitance sensors (ECHO-5; Decagon Devices, Pullman, WA) that were completely inserted at 45° angle into the center of two containers per irrigation zone and were connected to the same data logger that recorded substrate temperature. The data logger was attached to a multiplexer (AM16/32, Campbell Scientific) and a 16-channel relay controller (SDM-CD16AC, Campbell Scientific) to operate solenoid valves. Volumetric water content values were calculated from mV output and sensor-specific calibration equations in the program (not presented). One capacitance sensor per container was installed halfway between the base of the plant and the container sidewall. All plants were irrigated at 0700 and 1900 hr to replace 100% water use (Warsaw et al., 2009) calculated based on the average soil moisture readings of the two ECHO-5 probes per plot.

Container material influenced flux density, side wall, and substrate temperature (Table 1). Flux density of containers varied from 20 W·m−2 in Plastic and FB containers to about six times greater in Coir and KR containers and almost four times greater in WP containers. It was clear that container color was the major factor influencing light reflectance behavior of the container. In a study evaluating impact of white-, black-, and green-colored plastic containers on substrate temperature, as the color became lighter more light (energy) was reflected (Markham et al., 2011).

Upon visual examination, plants grown in Plastic and KR containers showed more root growth toward the center of containers, whereas plants grown in Coir, FB, and WP showed a well-distributed, fibrous root system throughout the substrate. Apparently, the increased substrate heating reduced root growth near the sidewalls of Plastic and KR containers, but did not impact overall root biomass accumulation and plant performance. An evenly spaced root system may have a positive effect on establishment in the landscape and long-term root health. 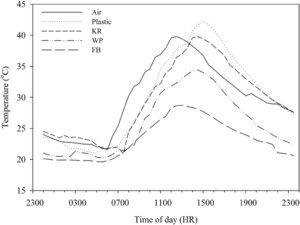 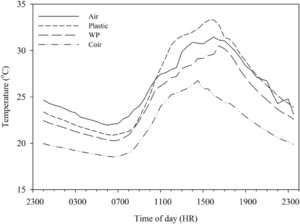