Plastic is the most commonly used material for containers in nursery and greenhouse operations. Schrader (2013) estimated that the green industry uses over 750 million kilograms of petroleum plastic for containers per year. Plastic containers are lightweight, easy to ship, and inexpensive (Helgeson et al., 2009). However, the disposal of plastic containers has raised concerns about the sustainability of this product. Today, the primary method of plastic container disposal is still in the landfill, and long-term risks of soil and groundwater contamination from ultraviolet light stabilizers and additives used in plastic products are unknown (Hopewell et al., 2009; Teuten et al., 2009). In 2012, 32 million tons of plastic waste were generated; however, only 9% of the total plastic was recovered for recycling (U.S. Environmental Protection Agency, 2014).

Since growers are also pressured to evaluate WU with increasing demand, regulation, and cost of water (Beeson et al., 2004; Koeser et al., 2013), research has compared WU in alternative and plastic containers. Evans and Hensley (2004) found that when vinca and impatiens were irrigated according to plant needs, plants grown in poultry feather and peat containers required more irrigation than that of plastic containers. Koeser et al. (2013) evaluated plant growth and WU for nine different alternative containers. Findings from their research suggest the more porous containers (wood fiber, manure, and straw) required higher irrigation amounts and produced smaller plants. McCabe et al. (2014) found the WU efficiency of ‘Rutgers’ tomato (Solanum lycopersicum) grown in paper-fiber containers with two coats of polyurethane was greater than that grown in paper-fiber containers with one coat of polyurethane and uncoated containers.

‘Roemertwo’ wintercreeper, ‘Green Velvet’ boxwood, and ‘Dark Knight’ bluebeard were used for experimental years 2011, 2012, and 2013, respectively. Growing season start dates, end dates, and fertilizer information for each experimental site are shown in Table 1. Plants were potted up on the first day of the experiment. At the end of each growing season, for each container type, 12 plants were randomly selected and destructively harvested. The stems and leaves were separated, and roots were washed with water until no visible substrate particles were attached. Plants were oven dried and then the dry weight was recorded. In Michigan, Kentucky, and Mississippi, remaining plants were kept in the hoop house covered with plastic film over the winter with no irrigation applied during winter to follow common Michigan nursery practice. In Tennessee and Texas, plants were kept in the hoop house covered with plastic film and irrigated as needed during winter. Mortality was recorded in May of the following year for all states. 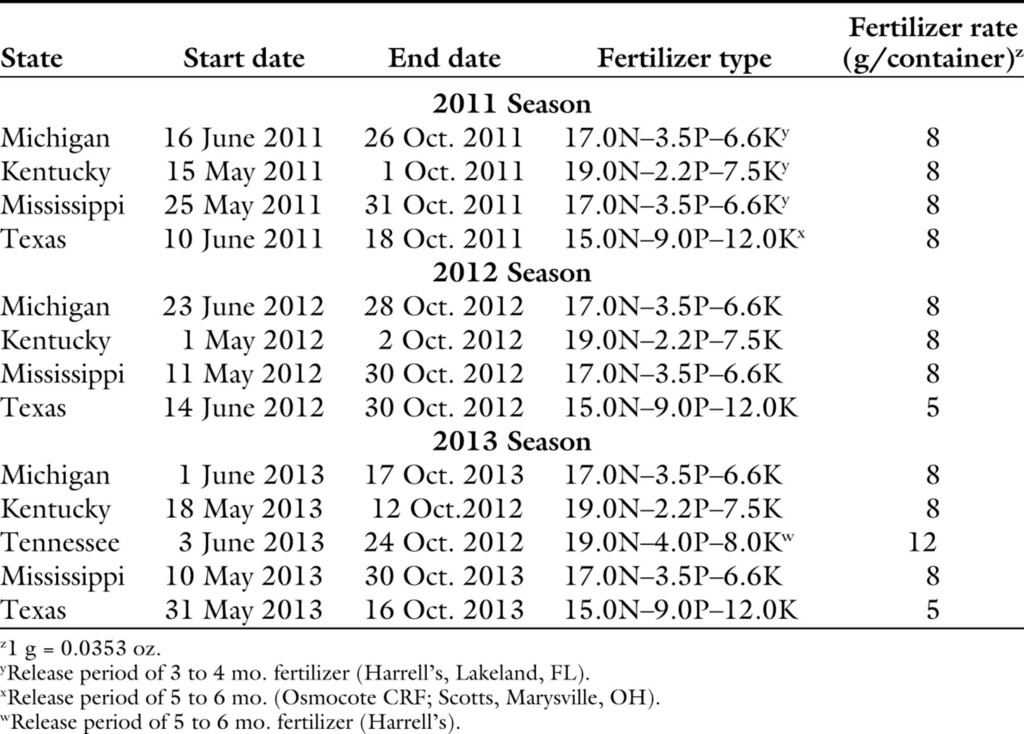 Irrigation application and daily water use

In Michigan, Kentucky, and Mississippi, two substrate moisture sensors (model EC5; Decagon Devices, Pullman, WA) were inserted at 45° angles into the center of two containers for each irrigation zone to measure volumetric substrate moisture content (θ). The sensors were calibrated by correlating readings with container weight change during a substrate dry down cycle. Sensor readings were recorded by a data logger (model CR1000; Campbell Scientific, Logan, UT) every 15 min. The data logger was programmed using CRBasic Language with support software (LoggerNet, Campbell Scientific). In this experiment, WU was calculated by the equation: WU= (θAI − θBI) × container volume. θAI was θ measured 5 min after irrigation application and θBI was θ measured right before the next irrigation event. The substrate used in this study resulted in gravitational water drainage from the sensor zone after 5 min. The data logger was programmed to calculate irrigation time using the average WU divided by application rate in each irrigation zone and then trigger the solenoid to irrigate. Irrigation was split into two applications per day initiated at 0700 and 1900 hr. For each experimental day, daily water use (DWU) was the sum of the two WU measurements taken at 0700 and 1900 hr. On the first day of experiment every year, the containers were irrigated to saturation, after given adequate time for the containers to drain, the data logger program was set to take the first measurement of θ as θAI initial value.

To further investigate plant response to irrigation volume, water use efficiency (WUE) was calculated as plant biomass divided by cumulative DWU. Because of a disease issue, Mississippi, Texas, and Kentucky locations had high mortality of plants in 2011, so only data in 2011 from Michigan is presented. Tennessee joined the experiment in 2013.

Electrical conductivity (EC) and pH were measured about every month using the pour through method described by Yeager (2003). A plastic tray was placed under the container 30 min after irrigation was applied, then 200 mL reverse osmosis water was added to the container, a bulb syringe was used to extract leachate from the tray and release it onto the sensor of a Cardy Twin EC Meter and Cardy Twin pH Meter (Horiba, Kyoto, Japan). This measurement was only carried out in Michigan from 2011 to 2013; therefore, only data from Michigan was presented.

Growth index, EC and pH were analyzed as repeated measurements using PROC MIXED procedure of SAS (version 9.2; SAS Institute, Cary, NC). When significant at the 0.05 level, treatment means on each measurement day were separated using a t test in the PDIFF option of the LSMEANS statement and the SLICE option of PROC MIXED (α = 0.05). Daily water use and WUE were analyzed using PROC GLM procedure of SAS and, when significant, means were separated using Tukey’s test at 0.05 significance level.

Evans and Hensley (2004) found that the rate of water loss through the container wall was a major factor affecting WU. The differences of plant DWU in alternative and plastic containers in this study were generally supported by the relative side wall porosity found in each container under controlled environmental conditions (Nambuthiri et al., 2015b), where water loss was greatest in FB and Coir containers, intermediate in WP, and least in plastic and KT containers. Supraoptimal root temperatures in plastic containers for all states except Michigan (Nambuthiri et al., 2015b) may have resulted in the higher DWU in plastic for Michigan than for other states.

The final GI of wintercreeper in 2011 was 18.8 cm with no difference between treatments. There were no differences in dry leaf, shoot, and root weights between treatments (Table 3). The mortality rate of plants grown in WP, KF and plastic was 2%, 2%, and 13% on 11 Oct. 2011 and increased to 52%, 52%, and 15% on 6 June 2012, respectively. Since there was no irrigation supply in the Michigan hoop houses during winter, the higher mortality rate of plants grown in WP and KF containers over the winter could be attributed to faster desiccation of substrate in fiber containers than plastic containers. 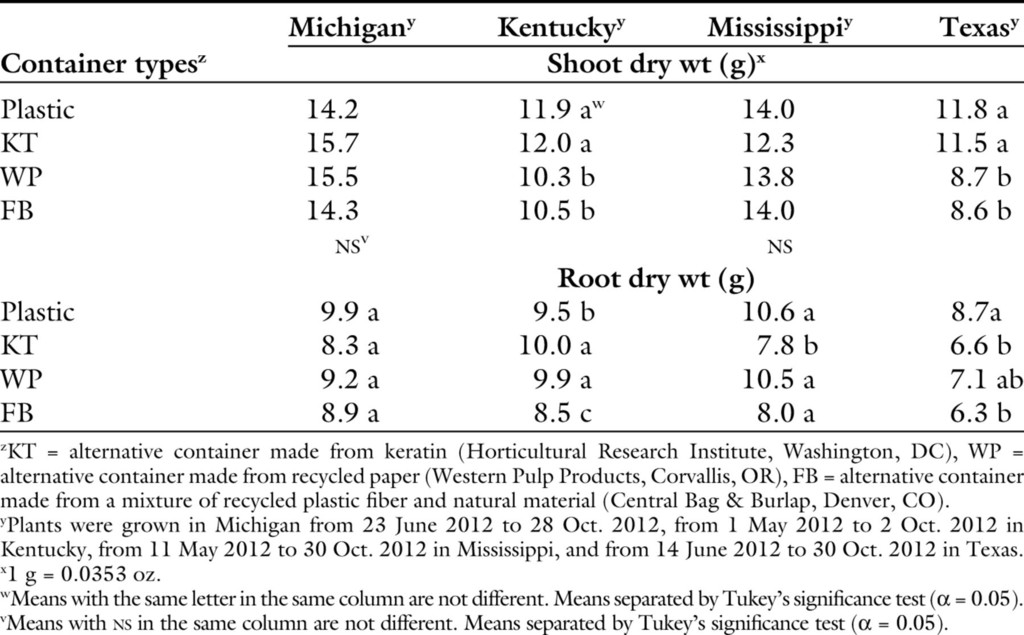 When combining 3 years data at five experimental locations, plants grown in alternative containers generally had similar growth compared with that of plastic containers. The high mortality of wintercreeper grown in WP and KF containers over the winter in Michigan in 2011 indicated that growers should monitor the substrate moisture during winter and irrigate accordingly when using containers with porous side walls. 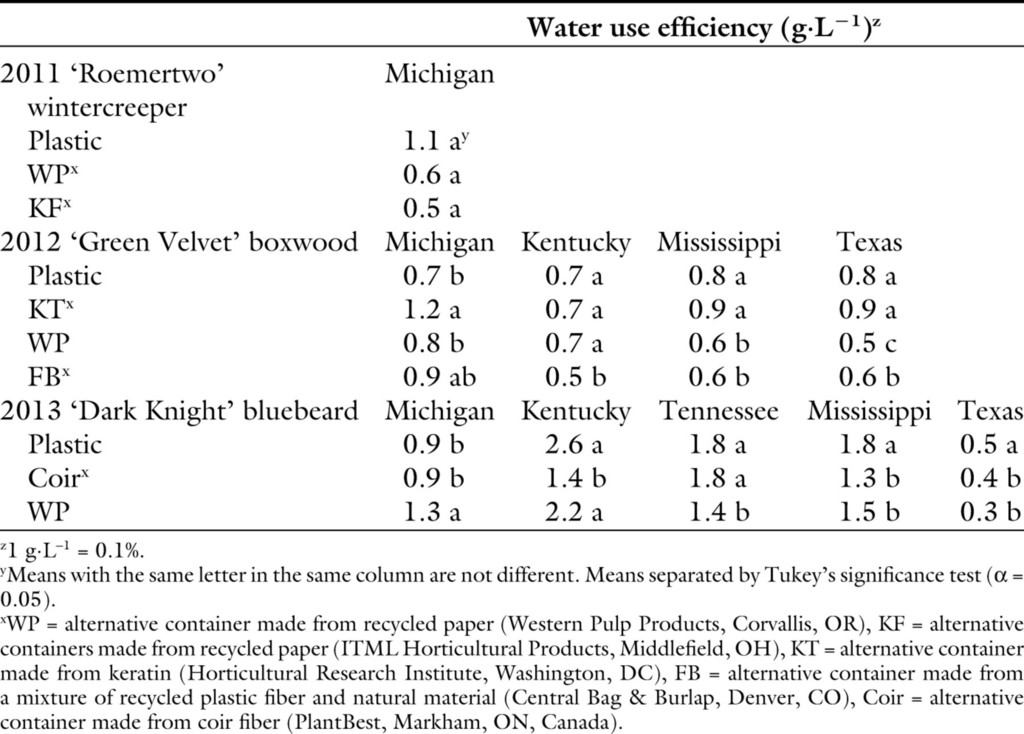 Leachate EC and pH (only data from Michigan are presented)

In 2011, the seasonal average leachate EC and pH were 0.4 mS·cm−1 and 7.4 with no differences between treatments for any dates measured. In 2012, on days 57 and 85, the substrate EC in KT containers was greater than in FB containers (Fig. 4). The substrate EC in WP and plastic containers were generally intermediate. This could be due to more rapid leaching from FB containers since the FB containers are made from more porous material. In addition, as water evaporated, some of the nutrients could have moved to the container wall. Leachate pH from FB containers was higher than other containers for most of the season (Fig. 5); however, the final leachate pH was similar between treatments. In 2013, EC of the pour through leachate from Coir containers was generally higher than that of WP and plastic containers; however, there was no difference on the first and last data collection day (Fig. 6). The average pH of pour through leachate was 7.9 with no difference between container types for all dates measured.

In summary, plant growth in all alternative containers was similar to those grown in plastic containers in current experiment when irrigation was applied based on WU. The different overwinter mortality between wintercreeper, boxwood, and bluebeard suggests that growers need to consider substrate moisture availability and plant water stress tolerance when containers with high water loss are used in climates where winter irrigation is not typical. Most states found that alternative containers made from fiber material (WP, KF, FB, and Coir container) used more water than that of plastic and KT containers. The environmental benefit of using alternative containers must be weighed against water usage and cost. Since both water and petroleum are valuable resources with increasing global demand, alternative containers that produce high quality plants with small water usage should be investigated.

Seasonal average daily water use in 2013 of ‘Dark Knight’ bluebeard grown in WP (alternative container made from recycled paper by Western Pulp Products, Corvallis, OR), Coir (alternative container made from coir fiber by PlantBest, Markham, ON, Canada), and plastic containers at Michigan, Kentucky, Tennessee, Mississippi, and Texas. Bars with the same letter are not significantly different according to Tukey’s significance test (α = 0.05); 1 mL = 0.0338 fl oz.

Leachate electrical conductivity of ‘Dark Knight’ bluebeard grown in Coir (alternative container made from coir fiber by PlantBest, Markham, ON, Canada), WP (alternative container made from recycled paper by Western Pulp Products, Corvallis, OR), and plastic containers on experimental days 3, 32, 65, 97, and 129 (day 0 = 1 June 2013). Means with the same letter within the same date are not different. Means separated by Tukey’s significance test (α = 0.05). NS suggest no difference in EC between container types within the same date; 1 mS·cm−1 = 1 mmho/cm. 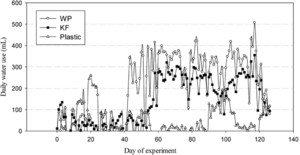 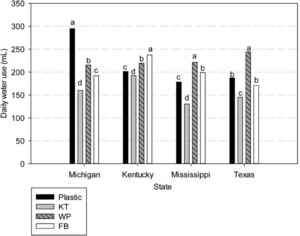 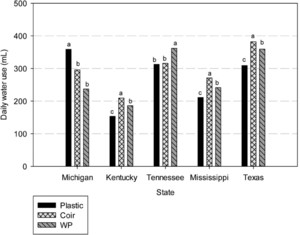 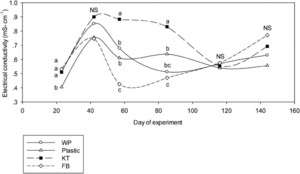 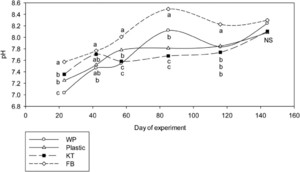 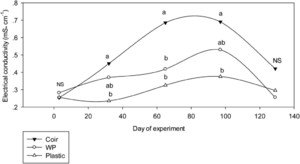