Search for other papers by Robert L. Geneve in
ASHS
Google Scholar
PubMedClose

Primary physiological dormancy is a basic concept for courses that emphasize general plant propagation or specific courses in seed biology or technology. Primary seed dormancy is a condition where seeds will not germinate even when the environmental conditions (water, temperature, light, and aeration) are permissive for germination (Hartmann et al., 2011). Not only does seed dormancy prevent immediate germination, it also regulates the time, conditions, and location where germination will occur. In nature, different kinds of dormancy have evolved to aid the survival of a species by programming germination for particularly favorable times in the annual seasonal cycles. The major type of seed dormancy seen in temperate plant species is classified as primary, endogenous, physiological dormancy (Baskin and Baskin, 1998). Therefore, the purpose of this manuscript is to describe an easily performed laboratory experiment suitable for undergraduate courses (both on campus and for distance learning), which demonstrates the mechanism for dormancy release in seeds with endogenous, physiological dormancy.

Eastern redbud (Cercis canadensis) is a good model system to illustrate dormancy maintenance and release in seeds with physiological dormancy because there is available published research concerning eastern redbud dormancy to support student laboratory reports (Geneve, 1991; Jones and Geneve, 1995) and the seeds are widely available commercially or from local collections. Additionally, eastern redbud seed is fairly large and easy for students to manipulate during laboratory.

This laboratory exercise can be performed as an on-campus activity or easily fit into a distance education format by mailing individual students treated seeds, petri dishes with germination paper (treated with or without the hormone solution), and a razor blade.

Eastern redbud seeds are stratified by placing ≈100 seeds (previously hot water or acid scarified) in a petri dish. Water is added to the petri dish to cover about one-half of the seed (≈20 mL). Alternatively, scarified seeds can be stratified in moist sand. For most seed lots, seeds are fully released from dormancy after 8 weeks of stratification at 5 °C. Seeds often become infested with surface fungi during stratification that should be washed off and damaged seeds discarded. If necessary, cleaned, stratified seeds can be dried for brief periods (usually up to 2 months) without significant impact on dormancy release, which may make mailing simpler for a distance education laboratory.

All seeds and isolated embryos should be germinated at 20 to 25 °C in the light (≈40 μmol·s−1·m−2 at ≈12 inches from a tandem pair of 40-W fluorescent lamps) using 8.5-cm-diameter plastic petri dishes containing one piece of germination paper (Anchor Paper Co., St. Paul, MN) wetted with 5 mL water or hormone solution. Petri dishes should be sealed with parafilm (Pechiney Plastic Packaging Co., Chicago, IL) along the edge to reduce water loss from the dishes. Alternatively, dishes can be place in a closed breathable, polyethylene bag. For the GA3 treatment, dry scarified seeds can be imbibed for 24 h in 100 µM GA3 before moving to petri dishes or dry scarified seeds can be placed directly into petri dishes containing the GA3 solution.

The seedcoat splitting and removal treatments should be made to seeds imbibed at least 48 h. Seedcoat splitting and removal treatments can be accomplished using a single-edge razor blade and forceps (Fig. 1). The seedcoat should be split following the wide edge of the seed either at the hilum (radicle end) or the end opposite the hilum (cotyledon end). The blade needs to cut completely through the seedcoat, but not deep enough to significantly damage the radicle or cotyledon. Embryos are excised and isolated from the seedcoat and enclosing endosperm by cutting along the cotyledon edge of the seed and gently separating the two halves of the seed exposing the embryo (Fig. 2).

Students can work individually or in teams of two students. To reduce materials, one petri dish can be used per treatment for each student (team) and treatments replicated across each member of the class. Germination percentages for excised embryos are taken after 7 d and for intact seeds after 7 and 14 d. Seeds are considered germinated after radicle emergence from the seedcoat or a geotropic response on the elongating radicle. Data from each group can be input into a spreadsheet and a bar graph generated for immediate class discussion or used for a future laboratory report. Typical class results are shown in Fig. 3.

The seedcoat splitting and removal treatments nicely demonstrate the importance of the seed coverings in maintaining dormancy. In eastern redbud (like many other species), it is apparently the endosperm cells in the endospermic cap covering the radicle that is responsible for maintaining dormancy (Fig. 5). Notice how the endosperm appears to “snap” under the pressure of the expanding radicle (Fig. 5). Therefore, completely removing the seed coverings or cutting through the endosperm layer at the radicle end of the seed allows the radicle to escape and germinate. It is thought that the endosperm plays a major role in restraining radicle elongation [either chemically (i.e., ABA), physically, or both]. In species where the endosperm can be easily separated from the seedcoat, the endosperm has been shown to be sufficient to maintain dormancy. The possible antagonistic roles of gibberellin and ABA in dormancy maintenance are suggested by the hormone treatments (Kucera et al., 2005) and can be discussed in the context of the basic dormancy model presented in Fig. 4.

Embryos of eastern redbud excised from their seed coverings and placed on moist germination paper in a petri dish before and after germination.

A conceptual model for dormancy release in a seed (such as eastern redbud) with endogenous, physiological dormancy. 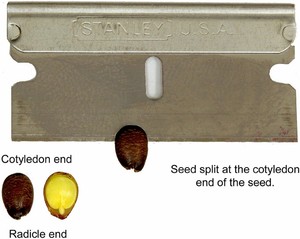 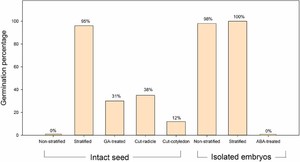 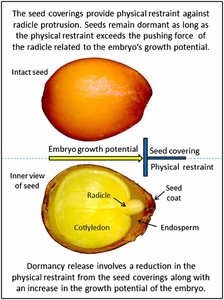