Quantifying the Effects of Hanging Baskets on the Greenhouse Light Environment

Efficient use of space is critical to the success of commercial greenhouses. Many growers produce hanging basket crops in addition to the crops grown on the bench or floor. In 2012, the wholesale value of flowering hanging baskets in the United States was $211 million, while foliage hanging baskets were valued at $78 million (U.S. Department of Agriculture, 2013). The most popular species grown in hanging baskets were geranium (Pelargonium ×hortorum), impatiens (Impatiens wallerana), new guinea impatiens (Impatiens hawkeri), petunia (Petunia ×hybrida), poinsettia (Euphorbia pulcherrima), and begonia (Begonia ×semperflorens-cultorum).

Concerns exist about the effect of overhead baskets on the light environment delivered to crops grown on benches or floors below hanging baskets; however, quantified data are limited to a recent survey (Llewellyn et al., 2013). The percentage of light reflected or intercepted by the greenhouse glazing and infrastructure alone can range from 30% to 60% even without hanging baskets (Critten, 1986, 1989, 1993). Hanging baskets potentially impact both the light quantity and spectral light quality delivered to the underlying bench crop as leaves differentially absorb, transmit, or reflect photons (Deregibus, 1985; Holmes and Smith, 1977). PPF interception by hanging baskets will therefore reduce the daily light integral (DLI), delivered to the crop underneath. DLI has a great impact on plant quality because lateral branching and flower number for many species have been found to increase as the DLI increases (Chong et al., 2014; Faust et al., 2005; Holcombe et al., 2001). The presence of hanging baskets can also potentially affect the light quality delivered to the underlying crop by preferentially absorbing R (600–700 nm) compared with FR (700–800 nm). Red inhibits stem elongation, reduces internode length, and promotes lateral branching (Holmes and Smith, 1977), while FR promotes stem elongation, increases internode length, and reduces lateral branching (Runkle and Heins, 2001; Smith, 1982). Hypothetically, plants grown in hanging baskets will reduce the DLI and the R:FR environment for the crop underneath, thus increasing stem elongation and decreasing crop quality (Pasian, 1994).

An experiment was conducted at a commercial greenhouse facility with an aluminum frame gutter-connected greenhouse (X.S. Smith, WA, NC) (lat. 35°32′47.5872″N, long. 77°3′7.8264″W, 11 ft elevation), from July through September. Each greenhouse had three individual greenhouse sections, or bays (Fig. 1), which were 21 × 150 ft with gutters 10 ft and ridges 14 ft tall. The gutters were oriented in a north–south arrangement. The greenhouses were covered with an inflated double-layer polyethylene film and internal and movable 30% PPF-reduction, neutral-density shadecloth (Ludvig Svensson, Charlotte, NC).

A quantum sensor (QSO; Apogee Instruments, Logan, UT) was secured outside on the peak of the greenhouse. The greenhouses contained no benches or plants. Two 3.3-ft line-quantum sensors (20 photodiodes per line, Apogee Instruments) were located 1 ft above the floor, within each of the two experimental units (Fig. 1). Height was determined based on average canopy height of crops grown commonly underneath. The line sensors were placed near the center of the experimental units and either 3 or 8 ft away from the gutter line. An R to FR sensor (SKR 110; Skye Instruments, Powys, UK) was located in the experimental unit containing the hanging basket treatments between the two quantum line sensors. The 660–730 nm sensor measures R (610–680 nm with a peak response at 660 nm) and FR (690–770 nm with the peak response at 730 nm). At every 10 min PPF, R and FR measurements were recorded with an eight-channel quantum integrator (Apogee Instruments). For PPF interception, data were averaged across two sensors and DLI was calculated for each experimental unit. R:FR was calculated using average daily measurements for R and FR.

Hanging baskets of 10-inch diameter were hung on lines running parallel to the gutters, which were at the same height as the gutter (10 ft). The lines were located 0, 3, 6, and 10.5 ft from each gutter in each direction. The line located at 0 ft was hung directly under the gutter, while the line located 10.5 ft from the gutter was the centerline of each bay; i.e., positioned directly under the peak. The containers measured 18 inches from the container base to the top of the hanger.

Empty containers were compared with containers filled with media and an established plant. The plants were multistem ‘Freedom Red’ poinsettia measuring 18 inches tall from the container base and 14 inches wide. The plants were trimmed between treatments so that plant growth during the experiment did not impact the irradiance measurements.

The greenhouse structures without any hanging basket treatments (control) intercepted 48% of the outside PPF. The average DLI measured outdoors during the experiment was 38.6 mol·m−2·d−1, so the control greenhouse averaged 20.1 mol·m−2·d−1 at the floor.

The analysis of variance table for the effects of hanging basket density (containers/yard2), container color (green or white), and container content (plant or no plant) on photosynthetic photon flux (PPF) interception and red to far-red light ratio (R:FR) (n = 3).

Container content had a significant effect on PPF transmission (Table 1). Treatments with plants in the containers averaged a 62.3% increase in PPF interception compared with the same treatments without plants (Fig. 1). The greatest PPF interception percentage for a specific treatment was 44.7%, which occurred when the green containers with plants were placed at the highest hanging basket density (2.57 containers/yard2).

One approach to optimizing hanging basket production while continuing to produce a high quality bench crop is to monitor the DLI with a weather station and to estimate the greenhouse PPF transmission percentage by comparing measurements made outside and inside the greenhouse with a portable sensor. By making an assumption about the DLI required to produce the bench crop, one can estimate whether the number of hanging baskets should be decreased or could be increased. For example, the quality of many greenhouse ornamental crops is commercially acceptable when the plants receive a DLI of 10 mol·m−2·d−1 (Holcombe et al., 2001). Therefore, the goal would be to identify hanging basket arrangements that allow 10 mol·m−2·d−1, on average, to be transmitted to the bench crops. For example, a greenhouse in Columbia, MO, would receive an average of 8, 11, 14, 19, 21, and 24 mol·m−2·d−1 from January through June, respectively (Renewable Resource Data Center, 2001), assuming 50% greenhouse light transmission without any hanging baskets. Thus, no hanging baskets would be placed overhead during January, since the bench crop would receive less than 10 mol·m−2·d−1 without any baskets. Hanging baskets could intercept 9%, 29%, 47%, 52%, and 58% of the PPF delivered during February through June, respectively, while allowing 10 mol·m−2·d−1, on average, to continue to be transmitted to the bench crop. Hanging basket density could be altered by changing the number of overhead hanging basket lines per bay and the container spacing per line, as suggested in this study. For example, assuming that in January through March the plants would be quite small, and in April through June the plants were relatively large, we can use the data in Fig. 2 to estimate the maximum number of hanging baskets that could be grown in green containers for each month. No hanging baskets would be recommended for January and 0.8 containers/yard2 could be grown in February. At least 2.6 containers/yard2 could be grown in March and April. Assuming that an additional 40% PPF-reduction shade curtain would be added to the greenhouse for May and June to help with heat control, then 0.8 and 1.4 containers/yard2 could be grown during those two months, respectively. This example underscores the challenge of matching production demands with the monthly changes in the PPF environment.

Hanging basket line orientation and height above the bench crop could also impact PPF uniformity on the greenhouse floor or bench. In this study, the hanging basket lines were north–south oriented, which allows for relatively uniform shadow distribution during the course of a day as the sun moves from east to west. However, east–west oriented lines would result in a more constant shadow pattern and poorer PPF uniformity, especially during the winter months when the solar elevation angle is low. The baskets in this study were hung from lines 10 or 8.5 ft above the ground. The closer the baskets are to the bench crop, the darker the shadow cast by the basket and the slower that shadow moves across the underlying crops. Therefore, higher basket lines and north–south line orientation are suggested for improved PPF uniformity. However, on average, a basket will intercept similar PPF levels regardless of the orientation of the line or height above the bench. Thus, line orientation and height should not impact the total number of photons intercepted, only the uniformity of their distribution.

Comparison between containers with and without plants also emphasizes the importance of plant size when considering PPF interception by hanging baskets. There is considerable variation in the desirable market size for different species. For example, fuchsia (Fuchsia ×hybrida) and boston fern (Nephrolepis exaltata) baskets may be 2 to 3 ft diameter, while a geranium basket may be marketable at 12 to 14 inches diameter. Although interception in white containers with plants was less even at high hanging-basket densities (Fig. 2), we expect that plants with a trailing habit would negate some of the benefit of using white containers because less radiation would reflect off the side and bottom of the container.

Plants in the hanging baskets reduced the R:FR delivered to the bench crop. Although requirements of R:FR for bench crops are not well documented, the magnitude of the change in R:FR recorded (Fig. 3) is not likely to have a large impact on bench crop growth. At the current density range, unfiltered sunlight delivered between the hanging basket lines delivers a large number of R and FR photons in a balanced ratio in comparison with the low number of photons being transmitted through or reflected off the canopy. Therefore, the number of direct sunlight photons in a balanced R:FR overrides the small number of photons delivered in a low R:FR. Thus, R:FR measured at the bench would only be greatly affected by plants in the hanging basket canopy when the plants covered a large portion of the “sky,” effectively increasing the amount of filtered light relative to unfiltered light. If this situation existed, we would expect a significant increase in stem elongation (Rajapakse and Kelly, 1992; Runkle and Heins, 2001) due to the low R:FR, but the DLI delivered may likely be insufficient for normal plant growth and development.

In summary, our data suggest that the primary effect that hanging baskets have on the greenhouse light environment is the reduction of the DLI transmitted to the bench crop, and this varies with hanging basket density, color of the container, and plant size. The effect of hanging baskets on DLI will limit the growth of the underlying crops before the R:FR environment becomes limiting for plant growth.

Schematic diagram of the greenhouse indicating relative location of experimental units and light sensors. The greenhouse consisted of three gutter-connected bays as indicated by the dashed lines. Circles represent the locations of the black plastic sidewalls that defined the perimeter of the experimental treatments; 1 ft = 0.3048 m. 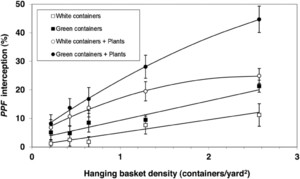 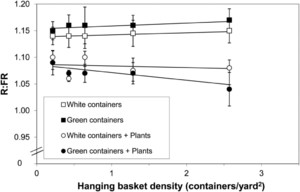