Fatty alcohol treatments can be used to eliminate the meristem of cucurbit (Cucurbitaceae) rootstocks, which prevents regrowth when grafting, but the effects of the treatment on the rootstock have not been documented. Two rootstock types, ‘Emphasis’ bottle gourd (Lagenaria siceraria) and ‘Carnivor’ interspecific hybrid squash (Cucurbita maxima × C. moschata) commonly used in watermelon (Citrullus lanatus) grafting significantly increased in cotyledon and hypocotyl size over 21 days after treatment (DAT) with a 6.25% fatty alcohol emulsion. There was a significant increase in total soluble sugar (glucose, sucrose, and fructose) content for each rootstock hypocotyl and cotyledon. Starch concentrations of hypocotyls and cotyledons also increased significantly in both rootstocks. This increase in stored energy could greatly increase the success rate of the grafting process. Increased rootstock energy reserves could overcome the need for keeping the rootstock cotyledon intact when grafting.

Fatty alcohol treatments can be used to eliminate the meristem of cucurbit (Cucurbitaceae) rootstocks, which prevents regrowth when grafting, but the effects of the treatment on the rootstock have not been documented. Two rootstock types, ‘Emphasis’ bottle gourd (Lagenaria siceraria) and ‘Carnivor’ interspecific hybrid squash (Cucurbita maxima × C. moschata) commonly used in watermelon (Citrullus lanatus) grafting significantly increased in cotyledon and hypocotyl size over 21 days after treatment (DAT) with a 6.25% fatty alcohol emulsion. There was a significant increase in total soluble sugar (glucose, sucrose, and fructose) content for each rootstock hypocotyl and cotyledon. Starch concentrations of hypocotyls and cotyledons also increased significantly in both rootstocks. This increase in stored energy could greatly increase the success rate of the grafting process. Increased rootstock energy reserves could overcome the need for keeping the rootstock cotyledon intact when grafting.

Grafting onto disease-resistant rootstocks is an important technology for overcoming soil-borne disease (Buller et al., 2013; Guan et al., 2012; Louws et al., 2010) and is used for watermelon production primarily in Asia, Europe, and the Middle East (Cohen et al., 2007; Davis et al., 2008). However, the high cost of grafted transplants has prevented the use of grafted transplants in U.S. production. As methyl bromide, an effective and inexpensive soil fumigant, has been phased out (U.S. Department of Agriculture, 2012) and disease-free land has become scarce, there has begun to be a need for grafted watermelon transplants in the United States. With current disease conditions in U.S. soils, it is estimated that at least 6.69 million grafted watermelon transplants per year would be required to combat soil-borne diseases previously controlled with fumigants (D. Liere, personal communication).

Much of the cost of grafted transplants is associated with the labor involved in their production and maintenance (Davis et al., 2008). The majority of these labor costs are a result of rootstock regrowth (Choi et al., 2002; Memmott and Hassell, 2010), which competes with the watermelon scion for nutrients and sunlight. In countries currently using grafted transplants commercially, the meristem is manually removed at the grafting stage (Hassell et al., 2008). Meristematic regrowth is manually removed during graft healing, at the transplanting stages, and thereafter as needed (Lee and Oda, 2003). Rootstock regrowth removal is an expensive, labor-intensive process and has been prohibitive to the adoption of grafted transplants in U.S. watermelon production.

Rootstock treatment with fatty alcohol can control meristematic regrowth by burning the meristem tissue and allow for successful grafting without the risk of regrowth. Commercial watermelon grafting methods require at least one rootstock cotyledon to remain intact to ensure graft success, and grafting must be done soon after the cotyledons unfold to limit regrowth (Hassell et al., 2008; Lee and Oda, 2003). Rootstock cotyledons provide energy to maintain the plant and heal the graft. Cucurbit seedlings are dependent upon seed reserves only during preemergent growth (Bisognin et al., 2005) and depend completely on the leaf-like, highly photosynthetic cotyledons for further development (Penny et al., 1976). At least one rootstock cotyledon is needed for early growth and establishment (Bisognin et al., 2005).

Fatty alcohol was originally used to control growth of axillary meristems on topped tobacco (Nicotiana tabacum). Because the fatty alcohols target only the actively dividing cells in meristems, the tobacco leaves remain intact, and energy that would have been sent to new growth is now stored in the leaves (Steffens et al., 1967). An application of fatty alcohol to the apical meristem of cucurbit rootstock seedlings before grafting has been shown to be an effective means of eliminating meristem tissue and controlling regrowth (Daley and Hassell, 2014). We observed that over a 21-d period following fatty alcohol treatment, both bottle gourd and interspecific hybrid squash rootstock seedling cotyledons seemed to expand, becoming long and rigid. The hypocotyl also increased in length and diameter over the observed time, yet the seedlings remained viable for grafting. We hypothesize that the increase in seedling size was due to an accumulation of carbohydrates within the rootstock. Thus, this experiment was designed to determine changes in rootstock seedling development over 21 DAT with fatty alcohol, as well as the effect on carbohydrate concentrations within the hypocotyls and cotyledons of the rootstock seedlings.

When cotyledons had unfolded, but not fully expanded (≈8–10 d after seeding), plants were acclimated in a climate-controlled room (75 °F, 70% to 75% relative humidity) for 12 h before treatment. Seedlings were then treated with 20 μL of a 6.25% fatty alcohol emulsion (Fair 85®, Fair Products, Cary, NC), which had previously been determined to be the optimal treatment volume and concentration to avoid regrowth and seedling mortality (Daley and Hassell, 2014). The fatty alcohol emulsion was applied with a single-channel micropipette (VWR International Radnor, PA) to the apical meristem area of each seedling. Water-only control seedlings were treated in the same manner with 20 μL distilled water. Trays remained in the treatment room for 5 h to allow the fatty alcohol or water treatments, respectively, to penetrate leaf tissue. After treatment penetration, seedlings were returned to the greenhouse for the duration of the experiment. While in the greenhouse, rootstocks were checked daily and any regrowth removed.

The experiment was arranged in a completely randomized design, with 72 plants randomly selected from five trays for each rootstock–time treatment combination. The experiment was repeated twice. Carbohydrate analysis was also a completely randomized design with 12 samples per treatment. Each sample was a composite of either 5 hypocotyls or 10 cotyledons.

On 1, 7, 14, and 21 DAT, 72 rootstock seedlings from the rootstock–fatty alcohol treatment were destructively harvested and measured. The water-only control seedlings were only harvested 1 d following fatty alcohol application. A razor blade was used to separate the hypocotyl from the roots at the soil surface. The cotyledons were removed at the point of attachment to the hypocotyl using the same blade. Individual hypocotyl and cotyledon fresh weights (Sartorius A 120 S; Data Weighing Systems, Elk Grove, IL), and length and width of all 72 seedlings were measured with a digital caliper (CD-6 B; Mitutoyo America Corp., Aurora, IL). Cotyledon leaf area was measured using a leaf area meter (LI 3100; LI-COR, Lincoln, NE). After measurements were recorded, hypocotyls and cotyledons were dried separately for 48–72 h at 70 °F (320–6 1000 Series; Napco Industrial Partner Richardson, TX), and dry weights of individual hypocotyls and cotyledons were recorded. Tissues of each organ were combined and then randomly divided into 12 samples, either 5 hypocotyls or 10 cotyledons, for carbohydrate analysis. Each of the 12 samples was ground using a mortar and pestle and stored at −20 °C until analyzed.

Glucose, sucrose, fructose, and starch were enzymatically extracted from 70 mg dried, ground tissue following the protocol of Zhao et al. (2010). Microplate enzymatic assays were carried out to detect each sugar (Zhao et al., 2010). Sugar concentrations were calculated using absorbance, volume sampled, and sample weight. Mean carbohydrate concentrations were then multiplied by the average dry weight per organ for each time after treatment to determine the amount of carbohydrate available in an average hypocotyl or cotyledon. Glucose, sucrose, and fructose results were combined and are reported as total soluble sugars, and starch results are reported alone.

Seedling growth measurements and carbohydrate data were analyzed using a linear mixed model in the fit model platform of JMP Pro 10 (SAS Institute, Cary, NC). The model was a complete factorial model of interactions between the fixed effect of DAT and the random effect of planting date. As rootstocks are of different species, each rootstock–organ combination was analyzed separately. Mean comparisons were performed using Fisher’s protected least significant difference test, with P ≤ 0.05. 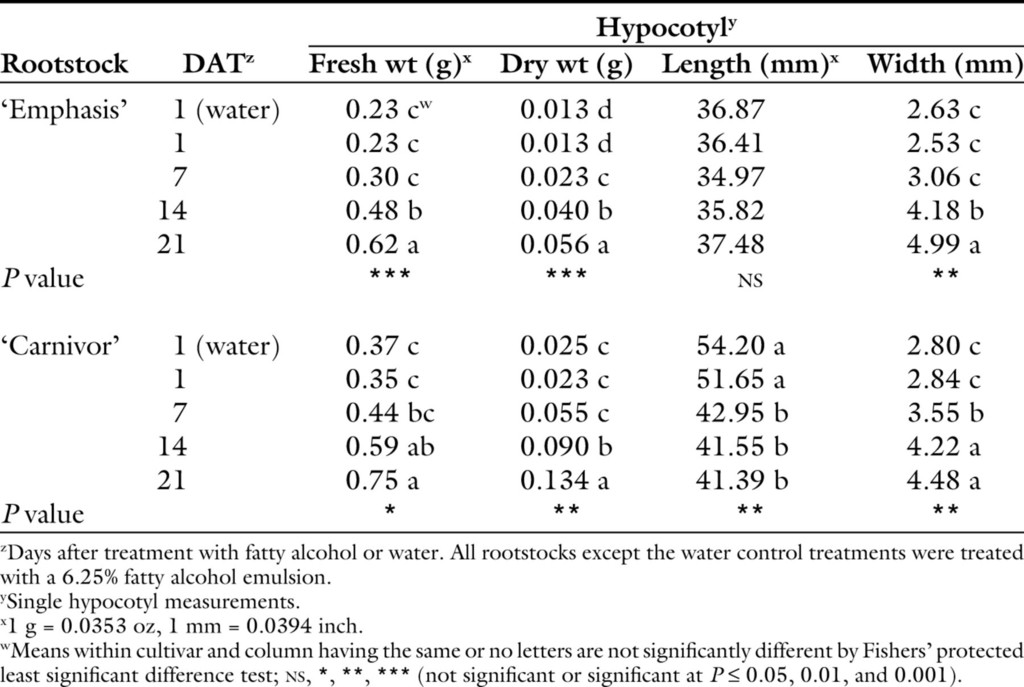 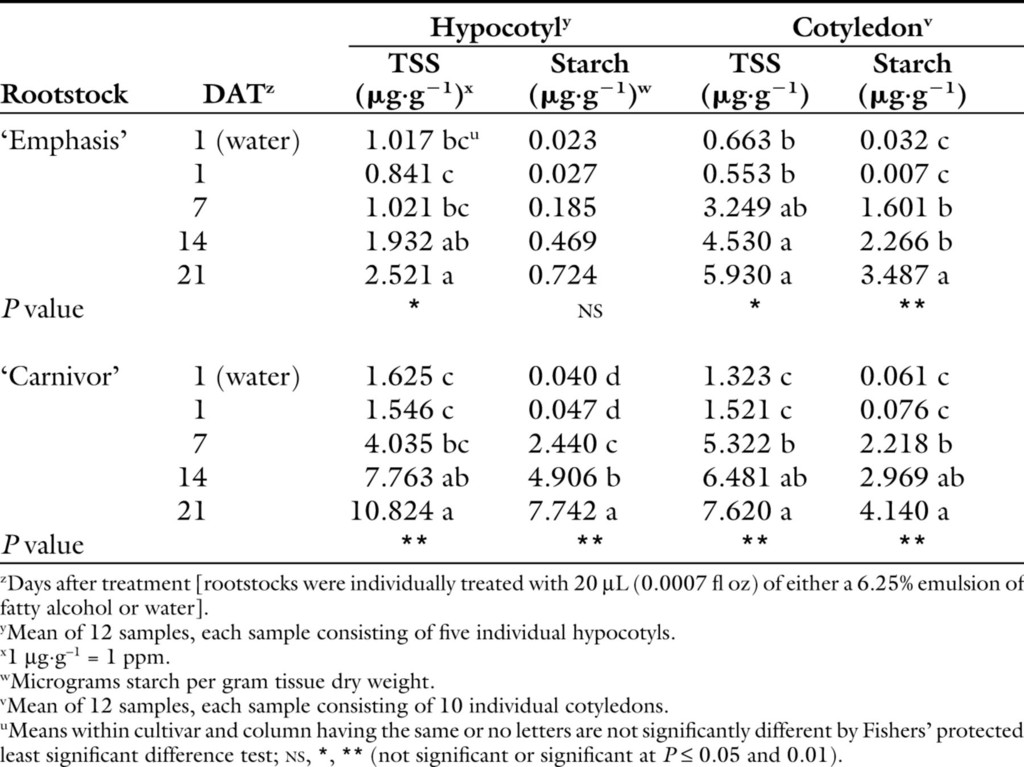 Hypocotyl length of ‘Carnivor’ decreased as time after treatment progressed, which seems improbable, as hypocotyls do not decrease in length once a set length is reached. Further investigation is necessary to verify this result. With the exception of ‘Carnivor’ cotyledons, the increases in hypocotyl and cotyledon size observed over the 21-d experiment agree with the findings of Havis (1940), who reported an increase in cotyledon size and thickness of brassica seedlings after removal of the epicotyl. Similarly, Saks and Ilan (1984) also reported an increase in sunflower (Helianthus annuus) cotyledon fresh weight over 18 d after decapitation.

Many studies have reported on the carbohydrate changes in physically decapitated woody plants, each with varying results regarding carbohydrate content responses to meristem removal. Tschaplinski and Blake (1994) reported significant decreases after 10 d in both starches and soluble sugars of decapitated hybrid poplar (Populus maximowiczii × P. nigra). Another study of defoliated cranberry (Vaccinium macrocarpon) uprights showed no effect of defoliation on total nonstructural carbohydrates after 7 d (Vanden Heuvel, 2004). In decapitated australian oak (Eucalyptus obliqua) seedlings, soluble sugars decreased by half after 10 d, and then increased to normal levels 40 d after decapitation (Taylor et al., 1982).

Tschaplinski and Blake (1994) attribute the loss of total nonstructural carbohydrates to the loss of leaves, the source of carbon and growth hormones in the plants’ source–sink relationship. In a similar way, watermelon rootstock seedlings may be dependent on the cotyledons. Bisognin et al. (2005) demonstrated the reliance of cucumber (Cucumis sativus) seedlings on both cotyledons in carbohydrate accumulation. Rootstock cotyledons are photosynthetic, thereby providing a carbon source for the seedling, which may be adequate for early growth. The importance of the cotyledons, and their retention in our experiment compared with the previously discussed decapitation experiments, may explain the increases in carbohydrate content observed in this study.

The increase in hypocotyl carbohydrate content after fatty alcohol treatment could benefit the watermelon grafting industry. First, rootstock treated with fatty alcohol may have an increased grafting window. That is, cucurbit rootstock seedlings typically have a narrow window of 1 to 2 d in which they may successfully be grafted without a developing meristem. The fatty alcohol treatment described herein could increase the grafting window up to three weeks, allowing treated plants to be left in the greenhouse to accumulate carbohydrates until ready to be grafted. Especially as increased hypocotyl width may play a key role in graft survival, further studies are required to determine whether the carbohydrate content will affect grafting success. Furthermore, the increase in hypocotyl carbohydrate content could also allow for the elimination of the rootstock cotyledon in grafting, which would decrease grafting costs by allowing for the use of a smaller tray size and smaller grafting space. This type of grafting method, typically used in tomato (Solanum lycopersicum) grafting, is used to eliminate the problem of rootstock regrowth, but has not been feasible in cucurbit grafting because of the strong dependence of the rootstock upon the cotyledons. The increase in carbohydrates stored in the hypocotyl may provide sufficient energy to support a cotyledon-devoid graft in cucurbits.

Based on the findings in this study, we conclude that cotyledons and hypocotyls of rootstock seedlings continue to develop and expand over 21 d after fatty alcohol treatment. Cotyledons and hypocotyls also increase in carbohydrate content, most notably starch. This increase in stored energy could allow for increased efficiency of current production practices, as well as new grafting methods that should reduce the cost of grafted transplant production.