Association between grape rust mites extracted from individual ‘Chardonnay’ grapevine leaves and leaf stippling symptoms in early summer. Leaf stippling severity was rated on a scale from 0 to 4, and grape rust mites were extracted with 70% ethanol using the spray and sieve method. Data presented are back-transformed means and 95% confidence limits from log-transformed data. Leaves were collected from Vineyard 2 on 13 July 2011.

Seasonal population of grape rust mites found on individual ‘Chardonnay’ grapevine shoots and leaves in 2011 and 2012 extracted using the rinse in bag method. The first value in each year indicated within parentheses represents the number of grape rust mites per shoot, all other values are per leaf (n = 20). Data are means (±SE), and both years are shown at same scale. Arrows indicate the time of wettable sulfur applications [4 lb/acre (4.5 kg·ha−1) actual sulfur] and an asterisk (*) indicates that lime sulfur was included in a given spray at 0.2 gal/acre (1.9 L·ha−1). Shoots or leaves were collected from Vineyard 2. 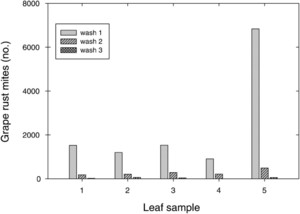 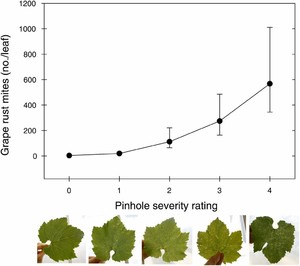 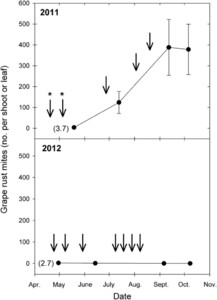