The hand-thinning gauge [Equilifruit; Maîtrise de la Fructification - Concepts et Techniques (MAFCOT) group of the Institut National de la Recherche Agronomique (INRA), Montpellier, France]. At each notch, there are two corresponding values that are of interest to the user: the F value [indicates the number of spurs or fruit to leave, based upon a final crop density of 6 fruit/cm2 (38.7 fruit/inch2) branch cross-sectional area (BCSA)] and the delta value [Δ (an adjustment factor that can be added or subtracted to the F value to decrease or increase the number of fruit removed during hand-thinning treatment)]. Branches are fitted with the hand-thinning gauge 3 cm (1.2 inches) from the trunk.

Fruit size distribution of three hand-thinning treatments imposed on ‘Golden Delicious’ apple in (A) 2009 and (B) 2010. The F value is the target number of fruit remaining after hand-thinning treatment with the hand-thinning gauge [Equilifruit; Institut National de la Recherche Agronomique (INRA), Montpelier, France]. Use of the F value will result in ≈6 fruit/cm2 (38.7 fruit/inch2) branch cross-sectional area (BCSA). Heuristic treatment entailed spacing a solitary fruit every 7–8 inches of branch length. Data are a summary of individual fruit weights of all fruit of whole trees, with five replicate trees per treatment; 1 inch = 2.54 cm, 1 kg = 2.2046 lb. 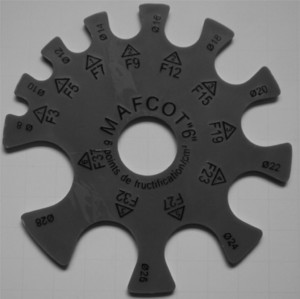 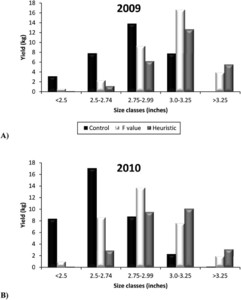 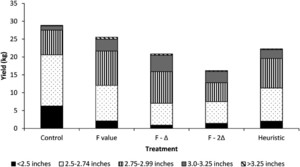 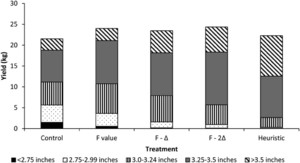