During perennial plant production, the height many perennials attain during growth makes them top heavy and limits their production. Shipping is also impacted; because of their height, fewer plants can fit on a cart. A prime example of this predicament is with lilies (Liliaceae family). These colorful, summer-flowering, bulbous perennials are commonly used as ornamental landscape plants, cut flowers, and potted plants (Dole and Wilkins, 2005); however, many species are tall, which subsequently reduces their transportability both from the grower to the retailer and from the garden center to the landscape when the shoot has emerged. Tiger lilies can reach a cumbersome height of 120 to 150 cm (Armitage, 2008), limiting their suitability for greenhouse forcing before retail sales (Whipker and Hammer, 1993) because most potted lilies cultivated are typically between 20 and 50 cm (Dole and Wilkins, 2005).

Although plant height can be manipulated by growers by using various cultural methods such as manipulation of light or temperature, inducing water or nutrient stress, restricting root growth, and mechanical means such as pinching or brushing, application of plant growth regulators (PGRs) continues to be commonly used to control height (Whipker and Evans, 2012). Flurprimidol is a PGR that is used to control plant height and can be applied as a foliar spray, substrate drench, or preplant bulb soak (Krug et al., 2005). It functions by inhibiting the catalyst that converts ent-kaurene to ent-kaurenoic acid and thereby interrupts the synthesis of gibberellin, a plant hormone important for cell elongation and promotion of shoot elongation (Rademacher, 2000; Sponsel, 2010).

Recommended application concentrations have been shown to vary within a bulbous species. For example, flurprimidol preplant bulb soak trials of cultivars of hyacinths and tulips exhibited varying degrees of height control (Krug, 2004). Miller (1992) reported that lilies exhibited varied response to PGRs, and flurprimidol has not been evaluated for use on tiger lilies. In addition, PGRs usage on tiger lilies can potentially differ from application on annuals because of their perennial nature. With perennial species, the desired goal is that with the initial PGR treatment growers will be able to reduce plant growth to decrease labor and make transportation easier. Then, once transported to a garden center, purchased by a gardener, and planted in the landscape, the plant will grow to the normal height in subsequent growing seasons. However, limited work has been done on investigating second-season effects of flurprimidol on herbaceous perennials. Sellmer et al. (2001) reported that after 24 weeks of growth in the landscape pampas grass (Cortaderia selloana) treated with ancymidol drenches (0.25 to 4.0 mg/pot) and paclobutrazol drenches (1.0 to 16.0 mg/pot) exhibited no distinguishable differences from untreated controls; however, plants treated with uniconazole drenches at >1 mg/pot were shorter, and at ≤0.5 mg/pot no noticeable differences in height were observed. This evidence suggests that growth after PGR application depends on concentration and type of PGR used (Nørremark and Andersen, 1990) and that trials should be conducted to determine if plants will exhibit a residual response after installation in the landscape. The objectives of these experiments were to determine 1) if flurprimidol preplant bulb soaks could be used to control stem elongation of tiger lilies and make the plants more suitable for retail sales; 2) if a PGR preplant bulb soak treatment affects the second year’s growth of ‘Orange Tiger’; and 3) if the recommended concentration for ‘Orange Tiger’ was applicable to other tiger lily cultivars.

‘Orange Tiger’ tiger lily bulbs (16- to 18-cm circumference; Berbee Bulb Co., Marysville, OH) were treated with flurprimidol (Topflor; SePRO Corp., Carmel, IN) on 13 Feb. 2009; bulbs were hydrated in 17 °C water for 1 h, allowed to drain 1 h, given 10 min soaks of 0, 5, 10, 20, 40, 80, and 160 mg·L−1 flurprimidol, and then allowed to drain for 1 h before potting. Concentrations were chosen based on previous work by Krug (2004). Bulbs were planted into 6.5-inch-diameter pots filled with substrate (Fafard 4P; Conrad Fafard, Agawam, MA). Plants were grown under a regime of 70/60 °F (day/night). Plants were fertigated daily using 13N–0.9P–10.8K Cal–Mag (SQM North America, Atlanta, GA) at 150 mg·L−1 nitrogen (N). The experiment was completely randomized with eight replications of each of the seven treatments. Data were collected on date of emergence, flowering date, and height and number of buds at flowering. All data were subjected to PROC GLM and PROC REG of SAS (version 9.2; SAS Institute, Cary, NC). Significantly different means (P ≤ 0.05) were separated by least significant difference (LSD).

After the completion of Expt. 1, five ‘Orange Tiger’ plants from each of the seven treatments were planted in landscape beds on 23 June 2009 to evaluate the residual effects of flurprimidol. Beds were amended with leaf mold before planting. Lilies were planted 2 ft apart in three rows spaced 1.7 ft apart with the middle row being offset between the two outer rows. Plants were arranged in a randomized block design. Plants were irrigated as needed and fertigated three times during the summer with 20N–4.4P–16.6K (Peters Professional; Scotts-Sierra Horticultural Products Company, Marysville, OH) at 250 mg·L−1 N. In 2010, data were collected on flowering date and height at flowering, basal shoot number, and number of buds at flowering. Data for treatments from the flurprimidol concentration trial that did not exhibit excessive height control were subjected to PROC GLM and PROC REG (SAS, version 9.2). Significantly different means (P ≤ 0.05) were separated by LSD.

In 2010, flurprimidol preplant soaks were evaluated on three cultivars of tiger lilies. Growing procedures were duplicated from Expt. 1 with the following modifications: 1) ‘Pink Tiger’, ‘Yellow Tiger’, and ‘White Tiger’ tiger lilies were treated with flurprimidol on 19 Feb. 2010; 2) soak concentrations of 0, 10, 20, and 40 mg·L−1 flurprimidol were used, which were based on the results of Expt. 1; and 3) bulbs were potted into 1-gal pots.

Preplant bulb soaks effectively controlled the height of ‘Orange Tiger’ tiger lilies (Fig. 1). At 10 mg·L−1, plants were 41.4% shorter than the control. Height control with some plants was excessive and made the plants visually too short for retail. Thus, even though the heights for plants treated with concentrations greater than or equal to 80 mg·L−1 flurprimidol were within the range appropriate for potted lilies reported by Dole and Wilkins (2005), growers would want to avoid these high levels so not to lose any marketable plants. Heights were 110.8, 64.9, and 26.0 cm, respectively, for the 0, 10, and 160 mg·L−1 soaks (Fig. 1).

There was no effect on emergence date, but the highest concentration (160 mg·L−1) delayed flowering and increased bud number. The mean time for shoot emergence was 17 d. Control plants flowered 98.3 d after planting. Preplant bulb soaks of 160 mg·L−1 flurprimidol increased the days to flower by 2.6 d to 100.9 d. Control plants had 10.6 buds per plant, and with the 160 mg·L−1 soak there was a 19% increase in bud number (data not shown because height control was visually excessive). Other treatments were not significantly different from the control for days to flower and bud number based on LSD.

Growers desire to have smaller plants that are easier to transport, and smaller plants result in easier transport for the consumer. On the basis of the results of Expt. 1, the ideal flurprimidol bulb soak concentration range for commercial production of ‘Orange Tiger’ was between 10 and 20 mg·L−1, which will result in shorter plants optimized for consumer transport. The lack of significance across treatments for flowering date, height at flowering, number of shoots, and bud number during the second season illustrated that when used at optimal concentrations flurprimidol does not affect plant growth or flowering during the second season. This response is favorable for consumers who want smaller plants to transport yet desire ‘Orange Tiger’ to grow to its normal height. However, that height must be effectively communicated to the customer to meet expectations. Differential responses to flurprimidol by ‘Pink Tiger’, ‘White Tiger’, and ‘Yellow Tiger’ indicate that growers should conduct flurprimidol preplant bulb soak trials on a few plants to determine optimal concentrations before application to an entire crop. Optimal concentrations of flurprimidol for ‘Pink Tiger’ and ‘White Tiger’ were 2 to 5 mg·L−1 and for ‘Yellow Tiger’ 20 to 30 mg·L−1. 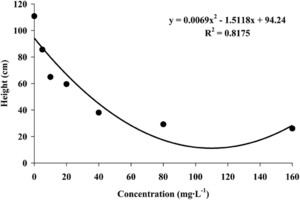 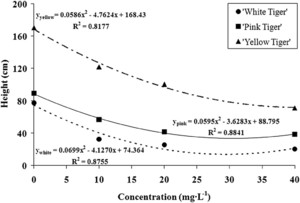