Not all root systems have the same architecture or are equally distributed throughout the soil profile (Fitter, 1987; Hodge et al., 2009). For example, numerous studies have examined root distribution in response to irrigation in field-grown crops (Andreu et al., 1997; Coelho and Or, 1999; Yu et al., 2007), concluding that it is common for root density to decrease with soil depth (Passioura, 2002). Recently, total root distribution, expressed as root biomass, has been shown to affect substrate heterogeneity and the retention of water within soilless container substrates (Cannavo and Michel, 2013). However, measuring root biomass alone does not take into account the changes in root foraging ability (Hodge, 2004). Root exploration within the soil volume is largely dictated by root systems architecture, including variables such as root length, depth, lateral root expansion, and branching (Hodge et al., 2009). Nonetheless, the perennial growth habit and sampling difficulties have resulted in few studies that investigate root distribution changes in containerized woody plant species.

The substrate moisture and root system matrix within containers is a heterogeneous volume that provides a means to compare species differences in root morphology. The objective of this study was to examine the relationship between root occupation within the soil volume and soil moisture sensor variability. We hypothesized that high variability in fine root density will result in high sensor variability. Additionally, we predicted that species with a high proportion of course roots would result in high sensor variability due to displacement of soil and water by the disproportionate large root mass. Understanding the effects of root growth and developmental patterns will have clear implications on how we water, fertilize, and manage our trees.

To characterize within-layer variation in substrate moisture, we deployed an array of 12 capacitance/frequency-domain sensors (model 5TM; Decagon Devices, Pullman, WA) with a 1-L field of measurement in one container of each of the six species. Sensors were inserted 6 inches into the container through a hole drilled in the container wall. Holes were covered with duct tape to prevent preferential flow paths. The sensors were arranged in a matrix of three vertical layers (10, 20, and 30 cm below the substrate surface) with four sensors in each layer (one sensor in each of the four cardinal directions). Sensors were connected to wireless data loggers (model EM50R, Decagon Devices) that read sensor output once every minute from which a 5-min average was recorded. Raw sensor output (millivolts) was then averaged over the four sensors within each layer and converted to VWC via a calibration equation developed specifically for this substrate–sensor combination. Variance measurements were calculated on a layer basis as the average of the four sensors per layer.

Three replicate trees of each species were randomly selected and destructively harvested in July 2010. The stem was first separated from the root collar with a fine tooth saw and then we separated the container into three equal volumes by depth (about 10 cm thick), dividing each layer into nine equal sections for a total of 27 sections per container. Two random root segment samples, one from a quadrate located in the interior portion of the container and one from an exterior quadrate were carefully excavated from each soil layer and immediately wrapped in damp paper towels and refrigerated. The roots in the remaining sections were gently washed free of adhering soil and brought back to the laboratory for analysis. Three replicates of 10-cm-long segments of each tree species were fixed in FAA (5 mL formaldehyde, 5 mL acetic acid, and 90 mL of 70% ethanol) solution and dissected by root order (Berntson, 1997; Fitter, 1987; Guo et al., 2008) following Strahler’s stream ordering system (Pregitzer, 2002) such that roots ending in a tip were classified as first order; two first-order roots join a second-order root; two second-order roots join a third-order root, and so on. This classification recognizes a shift in function from fine roots (roots with primary anatomical development that are responsible for water uptake) to coarse roots (roots responsible for transport and anchorage) that occur with increasing root order (Pregitzer, 2002). Root segments were fresh sectioned and imaged under light microscope (Axioskop II; Zeiss, Jena, Germany) at 20× magnification. Cross-sections were used to determine the anatomical development of root orders of each species with the presence or absence of a periderm and indications of secondary development. Based on these findings, subsequent root biomass in the harvested sections were separated by appropriate species-specific root orders that represented fine roots of primary anatomical development (uptake) roots (red maple, orders 1–2; honey locust, order 1; birch, orders 1–2; redbud, orders 1–2; hornbeam, orders 1–3; red oak, orders 1–3) vs. coarse (transport) development as a means of identifying root function.

Examination of the fine root population responsible for the majority of water uptake for the species between conical- and cylindrical-rooted species, by specific anatomical root order classifications, showed consistently opposite relationships between the variation in soil moisture sensor readings over the three depths of the container to the variation in the placement of fine roots (P ≤ 0.001) (Fig. 2). Species with a conical root distribution showed an unexpected decrease in the cv of the soil moisture sensor readings with an increase in fine root variability overall three substrate depths, although a significant relationship was only found in 0–10 cm (P = 0.039, R2 = 0.99) and 10–20 cm (P = 0.048, R2 = 0.99). For the conical distribution, the shallowest substrate depth (0–10 cm) had the highest proportion of fine roots and also the highest variation in soil moisture, which was associated with relatively high variation in fine root weight (>80%) (Fig. 2A). Species classified as having cylindrical root systems, on the other hand, did not show a significant relationship between fine root mass distribution and substrate moisture variability for the top (0–10 cm) (P = 0.143, R2 = 0.95) and middle (10–20 cm) substrate layers (P = 0.123, R2 = 0.96), or the deepest (20–30 cm) portion of the container (P = 0.725, R2 = 0.17) (Fig. 2).

In some instances, there was a significant difference between the substrate layers within the container for the large mass of coarse roots of conical and cylindrical root systems. We did not find a difference in coarse root biomass within the top portion of the container (P = 0.80), but significant differences were found at the 10–20 cm (P ≤ 0.001) and 20–30 cm (P = 0.05) depths between root system types. However, we were unable to find a tight correlation between the square or triangle root distribution variation and substrate moisture variability at any depth, perhaps because of the high substrate moisture variability found within redbud (Fig. 2).

Root branch segments used for scanning were standardized by length. To standardize across species, we examined the finest first-order roots within the root scan for each species. Not surprisingly, species differed in their diameter (P ≤ 0.001) and length (P ≤ 0.001) and surface area (P ≤ 0.001) (Table 1). However, we were unable to find any correlation between root diameter, root length, or root surface area and substrate moisture variability with depth for the two contrasting root types. Specific root length was also different among species (P ≤ 0.001), with a positive trend between SRL and soil moisture variability within the center depth of the container (10–20 cm), (P = 0.082, R2 = 0.57). Although not significant, this suggests that as SRL increases, so does the variability in substrate moisture readings (Fig. 3).

Morphological traits of fine root systems can help describe root growth strategies, including water and nutrient uptake (Comas et al., 2002). Among species, we found differences in root system morphological traits—including root diameter, length and surface area. These differences, however, were not always consistent between the conical and cylindrical root distribution types nor did they correlate with substrate moisture variability. Our results on SRL suggest that root systems with high SRL (e.g., long and thin roots) may increase substrate moisture variation. These results could largely be driven by the often fast growth rates associated with tree species with high SRL (Comas et al., 2002), resulting in higher variation because of faster root growth. Root systems with high SRL may also come at the cost of a shorter root lifespan, a direct result of less carbon investment in the root tissues (McCormack et al., 2012), which could also result in more rapid root tissue turnover and similarly higher soil moisture variability.

Intensive ornamental tree container production systems stand to benefit from optimal water and fertilizer inputs. Substrate moisture sensors offer a plausible and affordable method to monitor and control irrigation. As a means to effectively reduce the number of substrate moisture sensors required for accurate container VWC estimates, we must first understand the effects of root system growth and distribution on sensor readings and variability. Although root system distribution in the soil profile can have serious consequences on a plant’s ability to forage for water and nutrients, deconstructing a containerized root system by root function, as a means to approach the proportion of roots responsible for water uptake vs. transport, has not previously been considered for containerized trees. We found that root system distribution within the container can influence sensor variation based on the location of root biomass density and furthermore that root systems with larger proportions of coarser transport roots and/or woody biomass highly affect sensor variability. Although further testing is clearly warranted, initial results indicate horizontal sensor placement within the center of the container (i.e., inserted through the container wall) results in the least amount of sensor variability in conical rooting systems while cylindrical-rooted species should be examined on an individual basis. 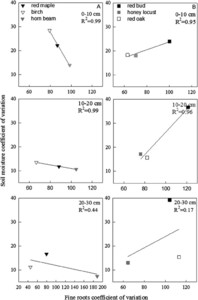 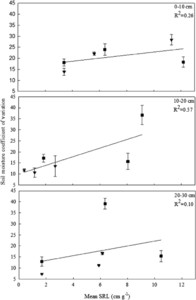