Until breeding improvements were made in the “common” type bermudagrasses in the 1980s and 1990s, sprigging was the most common means of propagation. Seeded cultivars released in the 1990s finally achieved equal or superior quality characteristics when compared with the interspecific “hybrid” cultivars that had long been the industry standard in medium- to high-maintenance turf applications (Baltensperger and Klingenberg, 1994).

Continued breeding efforts have led to greater genetic diversity among the cultivars (Yerramsetty et al., 2005). Patton et al. (2008) reported on the establishment vigor of 28 bermudagrass cultivars in the National Turfgrass Evaluation Program (NTEP) bermudagrass trial that indicated significant differences among cultivars. Establishment vigor was described as a combination of the rates of germination and postgermination seedling growth. However, several of the 28 cultivars in that work were sprigged, and several of the seeded entries were experimental lines and not commercially available.

Previous research on optimal seeding dates has been based on the establishment characteristics of a few to several seeded cultivars. However, with the availability of many newly released cultivars, recommendations for successful establishment protocols arising from previous work may or may not be valid for all cultivars (Patton et al., 2004a).

To that end, it would be useful to investigate what has become apparent anecdotally; i.e., some seeded cultivars tend to be very slow to germinate and difficult to establish, especially relative to other cultivars. The objectives of this study were to quantify the differences among commercially available seeded bermudagrass cultivars in germination rate and total germination, grown under 20-year average temperature regimes representing potential seeding dates in Lexington, KY.

Germination studies were conducted in the Turfgrass Science Laboratory on the University of Kentucky campus in 2011. Nineteen commercially available cultivars were evaluated: Arizona “Common” hulled, Arizona “Common” unhulled, Casino Royale, LaPaloma, Mirage II, Mohawk, NuMex Sahara, Princess 77, Riviera, Savannah, Southern Star, Sovereign, SR 9554, Sunbird, Sundevil II, Sunsport, Sunstar, Transcontinental, and Yukon. These cultivars were chosen from a list of commercially available cultivars provided on the NTEP website (Morris, 2010). From a list of more than 20 commercially available cultivars on the NTEP site, only 19 were available through retail distributors. All of the cultivars represented were obtained for field studies in May 2010 and were of the same harvest time and age. The seeds were stored in a 10 °C walk-in cooler between studies to ensure environmental consistency during storage.

Germination counts were made daily for 21 d postimbibition. Seeds were counted as germinated and removed when the radicle was visible under a ×1.75 magnifying lens. Germination rate [represented by the time to 50% germination (T50)] and percent total germination were calculated. The T50 was calculated using a five-parameter Sigmoid regression equation in SigmaPlot 10 (Systat Software, San Jose, CA). Statistical analysis was performed by PROC GLM of SAS (version 9.2; SAS Institute, Cary, NC) at a 0.05 significance level. Means were separated by F-protected Fisher’s least significant difference values. 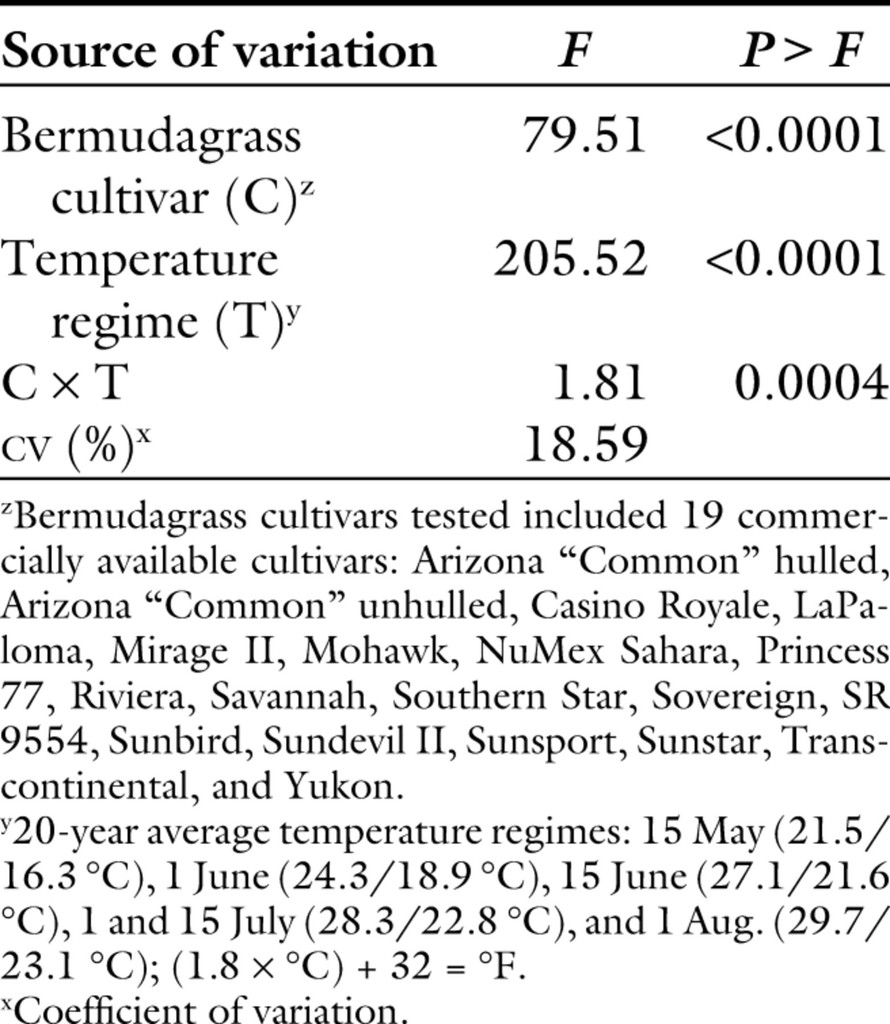 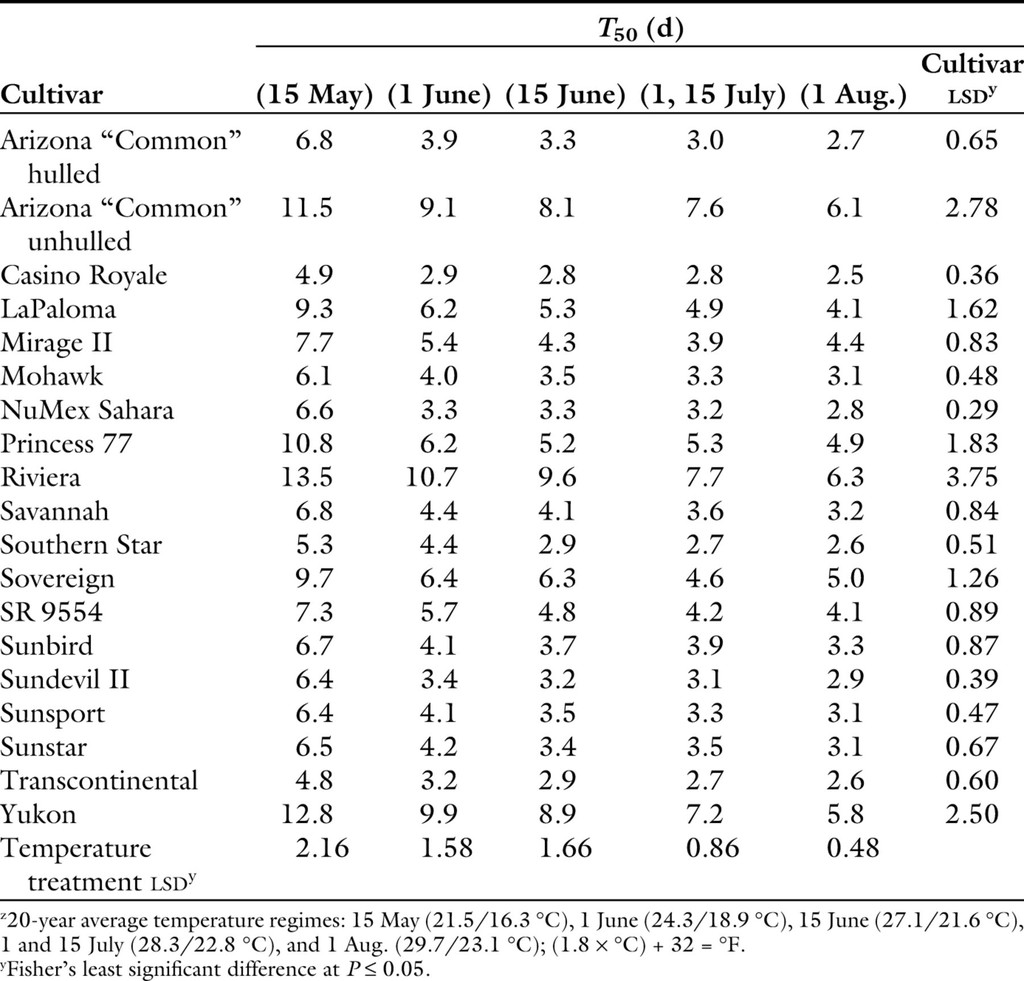 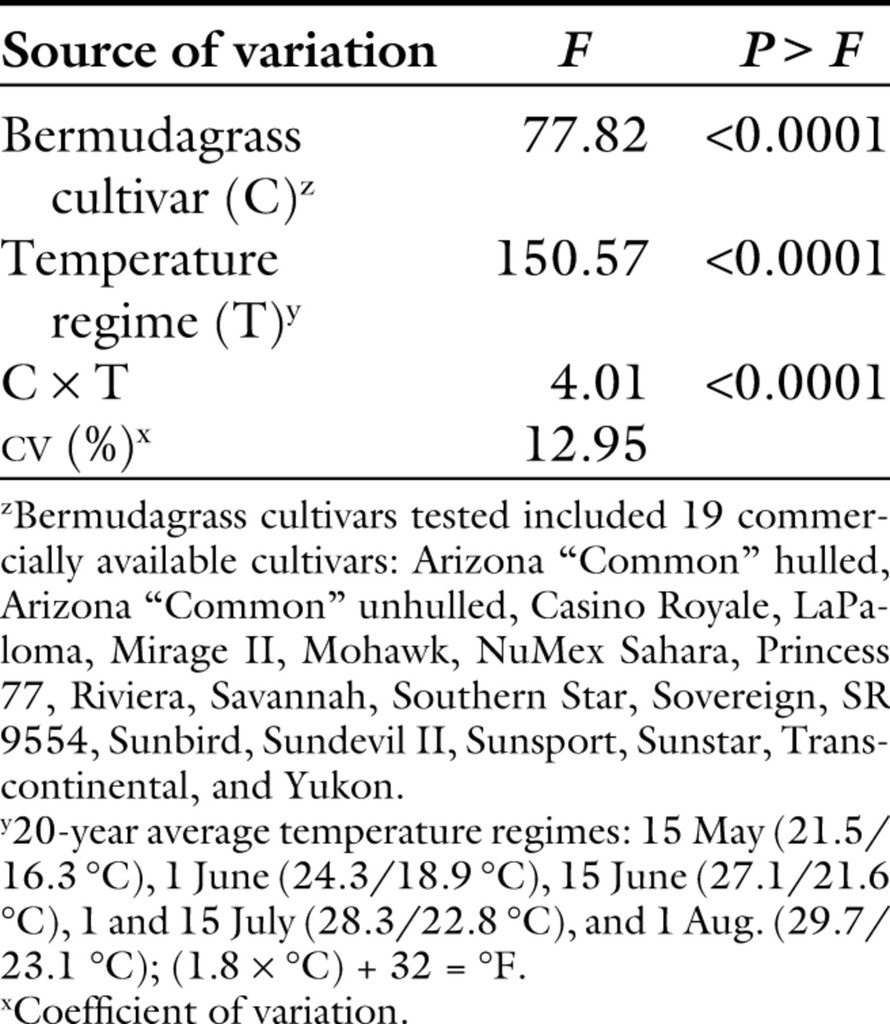 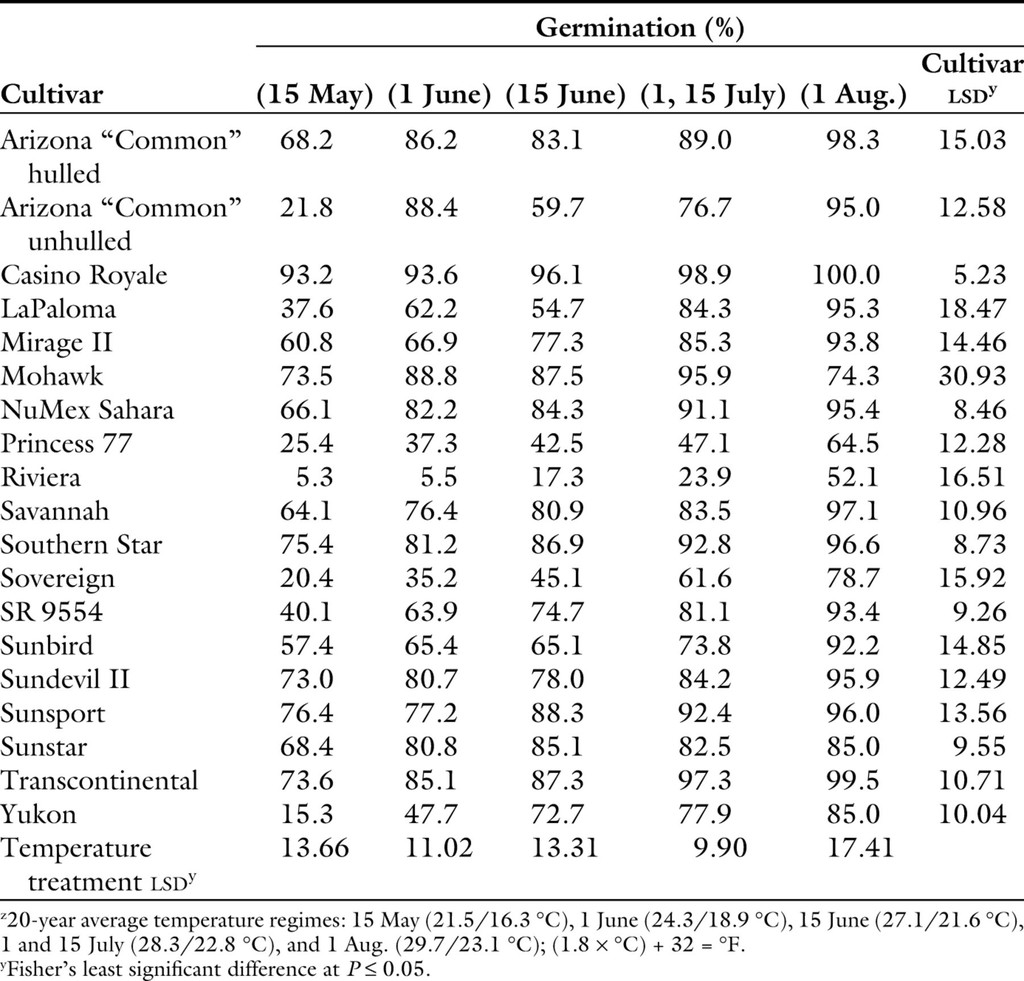 As previously referenced, most of the recent studies evaluating cultivar germination rate or speed and time to cover included only a few of the most popular bermudagrass cultivars. With many new cultivars commercially available and their use increasing in the transitional climatic zone, it was important to complete a study to quantify differences in these parameters. As evidenced by this study, there are significant differences among many of the cultivars with respect to speed and total germination as affected by temperature.

With the recent release of many new cultivars, information concerning establishment and performance has lagged behind; i.e., not all commercially available cultivars have been evaluated. Turfgrass managers in the transitional climatic zone are major consumers of seeded bermudagrasses. This study shows that in the upper transitional climatic zone, conventional recommended seeding dates are not necessarily applicable to all of the commercially available cultivars of bermudagrass. Although most of the cultivars obtain greater than 80% germination, this may not occur until the warmer temperatures of August. Seeding bermudagrass in August in the transition zone could put the manager at a much greater risk for stand failure that would not be realized until the following spring. With a much shorter time to establish proper food reserves, the chances of stand failure due to winterkill would increase significantly for most areas in the transitional climatic zone. Some of the cultivars evaluated, such as Riviera, Princess 77, and Sovereign, struggled to obtain 80% germination at the temperatures that would normally be expected during the recommended seeding dates of mid-May to mid-June.

We conclude that there are vast differences in germination characteristics among the cultivars tested. Methods that have been accepted as standard (e.g., early June seeding date defined as optimal) may now be called into question for some cultivars seeded in the upper transition zone. Considering the many cultivars available today, genetic diversity likely contributes to the differences in performance characteristics. Temperature plays a definite and determining role in the ability of seeded bermudagrass cultivars to complete the germination process. In the upper transitional climatic zone, temperatures do not reach optimal levels for the germination of several cultivars until July. ‘Riviera’ and ‘Princess 77’, which are two of the highest quality cultivars, have enormous difficulty completing germination in an upper transitional climatic zone environment at the normal recommended seeding date of 1 June. Future research should investigate the physiological mechanisms linked to temperature that may be impeding the completion of the germination process. In addition, and perhaps more importantly, turfgrass managers should determine if the establishment time required for a specific intended use will coincide with the expected environmental conditions before choosing a cultivar.