Vermiculite is a naturally occurring sheet silicate mineral, formed by hydrothermal alteration of minerals such as biotite and phlogopite (Brindley and Brown, 1980). Flakes of unprocessed vermiculite are mica-like and contain interlayer water within their structure. When the flakes are heated rapidly, above 870 °C, the water flashes into steam and the flakes expand into accordion-like particles. This process is called exfoliation, and the resulting material is lightweight, fire resistant with excellent insulating and absorption properties (Potter, 2000). Vermiculite has been widely used as a horticulture substrate component because of its lightweight and its capacity to hold water and mineral nutrients (Nelson, 1998). Most commonly, vermiculite has been blended with peat as a component to increase substrate water-holding capacity (Boodley and Sheldrake, 1977; Stamps and Evans, 1999). Additionally, vermiculite has been commonly used as a top coating material because it is sterile, holds significant water in its layers, and seedlings can easily emerge through it upon germination (Dana and Lerner, 2001). Walker et al. (1984) reported that watering was less frequent when a top coating was used in seed germination. A vermiculite top coat was also shown to prevent surface packing of the substrate, reduce the incidence of tipping over of seedlings, and increase the seedling rating as compared with no top coating (Walker, 1984).

Cork oak (Quercus suber), native to southwestern Europe and northwestern Africa, is a forest tree species grown in the Mediterranean basin countries, where it is exploited for cork production (Manzanera et al., 1993). Cork is produced by the cork cambium in the outer bark of the cork oak, and it is considered a natural and renewable raw product (Silva et al., 2005). Cork consists essentially of suberin, lignin, and cellulose (Kolattukudy, 1978) and also contains a small amount of fatty acids, terpenes, long chain aliphatic compounds, and saccharides (Pereira, 1988). These compounds give cork unique properties such as high elasticity and low permeability to liquids. Because of these physical properties, cork has a wide range of traditional applications, such as in green buildings and handicrafts, but cork stoppers for wine bottles remains the primary use and the highest value market (Silva et al., 2005). Waste cork from the cork-based products industry, low-quality cork, and virgin cork (rough and irregular cork bark coming from the cork tree the first time it is harvested) are all used to produce cork granulates (Gil, 2009). This granulated cork material, discarded and unsuitable for cork products production, can be used in a variety of applications and different task such as in industrial components, various fillers, insulators, or as compounds to be mixed with other materials.

Limited research has been reported regarding granulated cork in substrates. Bazzocchi and Giorgioni (1987) reported that nephthytis (Syngonium podophyllum) grown in cork oak bark had slower growth than when grown in a peat-based substrate. In this case, the lower growth rate was attributed to nutritional and water deficiencies. Aguado et al. (1993) reported that geranium plants grown in substrates with cork had lower dry shoot weights than plants grown in peat-based substrates without cork. The reduced growth rate was attributed to a possible phytotoxic effect of phenolic compounds in the cork. However, other researchers have reported that cork oak bark was a suitable substrate for growing plants. Carmona et al. (2011) reported that particle density, bulk density, effective porosity, container capacity, and aeration capacity of cork was within the requirements for nursery substrates as recommended by Carmona and Abad (2008). Additionally, Ortega et al. (1996) reported a study in which they examined the growth of different species in a phytotoxicity bioassay of cork bark substrates and found that radicle growth of chinese cabbage (Brassica pekinensis), lettuce (Lactuca sativa), pepper (Capsicum annuum), and radish (Raphanus sativus) plants was higher in water-washed cork than in vermiculite. The authors speculated that the hot water wash technique used to wash the cork before use removed phytotoxic compounds.

Despite the benefits reported for using vermiculite as a top coating in seed germination, the relatively high costs of vermiculite as a result of mining, transportation, and heating, reported environmental and health concerns (Bandli and Gunter, 2006), and the desire to use byproducts in substrates have resulted in an interest in alternatives to vermiculite in horticulture substrates. The objective of this research was to compare the efficacy of vermiculite and granulated cork as a top coating for seed germination and seedling production.

Sphagnum peat (Sun Gro Horticulture) was amended with calcitic limestone to adjust the pH of the sphagnum peat (peat) to 5.8. Five-cell-by-five-cell mini-plug trays (round 273 with a volume of 5 mL per cell) were filled with the amended peat up to 4 mm from the rim of the plug cells. Seeds of ‘Rutgers Select’ tomato, ‘Dazzler Lilac Splash’ impatiens, ‘Orbital Cardinal Red’ geranium, ‘Better Belle’ pepper, and ‘Cooler Grape’ vinca were sown onto the surface of the peat, and the seeds were covered with a 4-mm top coating of either vermiculite or cork granulates. The mini-plug trays were placed on expanded metal benches in a polycarbonate-glazed greenhouse. Temperature set points were 65 °F for heating and 75 °F for cooling. Light levels during the trial period averaged 350 to 450 μmol·m−2·s−1 at 1200 hr. Initially, the seeds were misted four to five times per day with clear water to maintain a moist top coat. After they developed two true leaves, plants were irrigated as required to maintain a moist substrate with a nutrient solution containing 25 ppm nitrogen using 15N–2.2P–12.5K fertilizer (Excel 15-5-15 Cal Mag; Everris International, Geldermalsen, The Netherlands).

A five-cell-by-five-cell mini-plug tray served as an experimental unit. The experimental design was a complete randomized block with six blocks and each species and top coating appearing once per block. The experiment was repeated three times.

For each species, the t-test was conducted to determine if significant differences in days to germination, number of seeds germinating per tray, average dry shoot weight, and average dry root weight occurred between seeds germinated with a cork granulate or vermiculite top coat.

The physical properties of substrates have been reported to be largely determined by the size of the particles of the substrate components (Buck and Evans, 2010). Larger particles tend to result in the creation of larger pores (macropores) in substrates. Larger pores tend to drain after irrigation and provide the air-filled pore space of the substrate (Bunt, 1983; Raviv and Leith, 2008). Conversely, Tilt et al. (1987) found that increasing the number of fine particles in a substrate increased the number of smaller pores (micropores) and increased water-holding capacity of the substrate. In this experiment, vermiculite and cork granulates had similar particle sizes but different physical proprieties. When vermiculite is thermally treated, the macroscopic plate layers were spread apart in an accordion-like structure. The space between the layers reduced the particle density of the vermiculite, which in turn resulted in a lower bulk density than the granulated cork. Additionally, water was absorbed in-between the layers of the vermiculite. This allowed vermiculite to hold water not only in the micropores but also in the particle layers, and this gave vermiculite a higher water-holding capacity than the granulated cork that held water only in the micropores created by the particles. Additionally, although the vermiculite and granulated cork were both an average 1 mm across in size, the cork had more of an angular structure than the vermiculite. This would have resulted in the two materials packing in the porometers differently. Angular materials tend to pack less densely and create more macropores. This would explain why although particle sizes were the same, the granulated cork had a higher air-filled pore space. 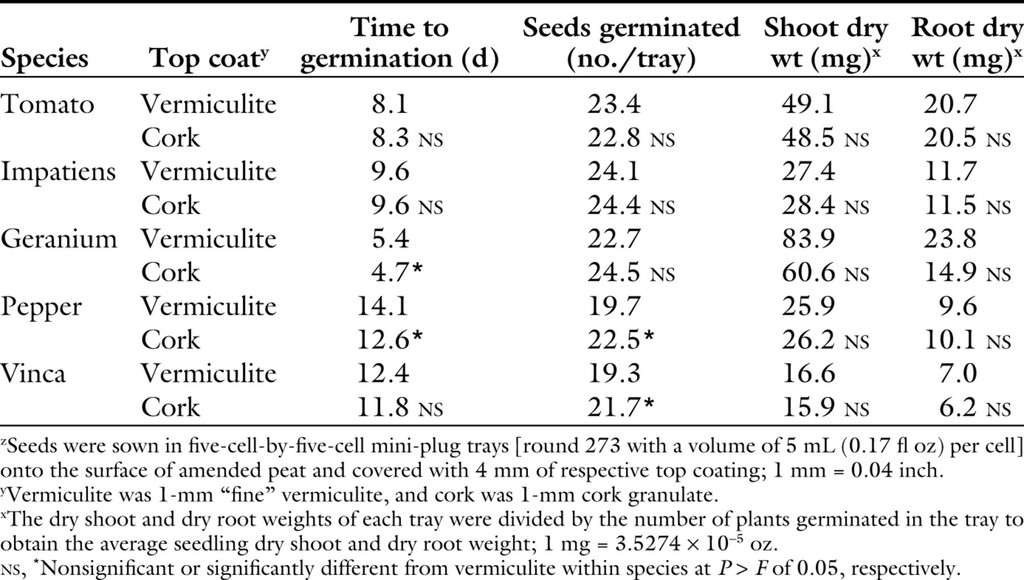 Although Bazzocchi and Giorgioni (1987) reported reduced growth of nephthytis grown in cork oak bark, they attributed reduced plant growth in cork to nutritional and water deficiencies as a result of the physical properties of the cork substrate. Although Aguado et al. (1993) reported reduced growth of geranium grown in a cork oak-based substrate, they proposed that reduced growth was because of phytotoxic phenolic compounds in the cork. We observed no reduced germination and no reduced seedling growth for species germinated with a top coating of granulated cork as compared with vermiculite. The results in our experiment may have been different because only a small amount of cork was used and the cork was applied only to the surface of the substrate as a top coat and not incorporated into the peat. By only using a small amount of granulated cork and only using it as a top coat, the developing seedling rooted into the peat substrate below the top coat and, therefore, may not have experienced phytotoxic levels of phenolic compounds and would have had adequate moisture retained by the peat to not have experienced water stress. 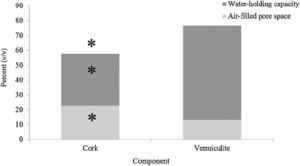