Chile peppers (Capsicum sp.) are cultivated worldwide and are often prized for their heat (Bosland and Votava, 2012). A widely used heat measurement for chile peppers is the SHU (Scoville, 1912). This measurement is the highest dilution of a chile pepper extract at which heat can be detected by a human taste panel. Alternative instrumental methods have been developed since Scoville’s test. High-performance liquid chromatography (HPLC) is the most accurate and efficient method (Collins et al., 1995).

Chile pepper heat, or the amount of capsaicinoids (a group of alkaloids unique to Capsicum sp. that cause a burning sensation when eaten) in a chile pepper pod, is dependent on the genetic makeup of the plant and the environment where it is grown (Zewdie and Bosland, 2000a). The heat level can vary significantly among plants of the same variety grown in a single field at the same time. When single plant heat levels of genetically identical chile pepper plants were compared with the field average, it was found that individual plants had heat levels as much as 78% higher than the field average, indicating the environment contributes significantly to chile pepper heat levels (Harvell and Bosland, 1997). Further research showed that fruit from different areas on the same plant had significantly different heat levels (Zewdie and Bosland, 2000b).

Heat level claims for chile peppers can be based on single fruit, single plants, or as an average of the variety as a whole. For the Guinness World Records, a single fruit is sufficient to set a record for some plants. However, for the chile pepper processing industry, an average heat level is more informative.

A chile pepper variety, Trinidad Scorpion, from Trinidad and Tobago has been reputed to be hotter than ‘Bhut Jolokia’. Currently, Guinness World Records recognizes ‘Butch T Scorpion’, grown by Butch Taylor in Australia, as the world’s hottest chile pepper at 1,463,700 SHU (Guinness Book of World Records, 2011). Other varieties from Trinidad and Tobago (e.g., ‘Trinidad Moruga Scorpion’, ‘Trinidad 7-pot Jonah’, and ‘Douglah Trinidad Chocolate’) have been reported as very high heat varieties (Adams and Mohammed, 2008). Some of the variety names (i.e., ‘Trinidad 7-pot Jonah’) allude to folklore that they are hot enough to spice seven pots of soup.

To conduct a scientifically valid test to determine the mean heat level of a chile pepper variety, an ample seed sample must be planted in replicated trials that include an appropriate control. A random sample of fruit from the replicated varieties should then be tested. In this manner, a statistically higher heat level could reasonably be considered hotter than the current hottest variety.

This study was undertaken to 1) compare the heat levels of ‘Trinidad Moruga Scorpion’, ‘Bhut Jolokia’, ‘Trinidad Scorpion’, ‘Douglah Trinidad Chocolate’, and ‘Trinidad 7-pot Jonah’ in a replicated field trial; 2) establish which chile pepper variety truly has the highest average heat level; 3) determine any differences among the varieties across the environment; and 4) determine the genetic relatedness of the chile peppers using molecular data.

The original seeds of ‘Trinidad Scorpion’ were sent to the Chile Pepper Institute in 2008 by H. Adam at the Caribbean Agriculture Research and Development Institute in Trinidad and Tobago. ‘Trinidad Scorpion’ was grown under insect-proof net cages to produce the bulk seeds with the 2008 seed increase used in the replicated trials (Bosland, 1993). Seeds of ‘Trinidad Moruga Scorpion’, ‘Trinidad 7-pot Jonah’, and ‘Douglah Trinidad Chocolate’ were generously donated by J. Duffy of San Diego, CA. Fruit images in color of each accession can be seen at www.superhotchiles.com.

Seeds were sown into a planting medium (Metro-Mix 360; Sun Gro Horticulture, Bellevue, WA) in 12-celled bedding plant containers (Hummert Intl., Earth City, MO) that were placed into trays that hold eight 12-celled containers each and placed in a climate-controlled greenhouse maintained at 82 °F day/65 °F night (± 11 °F) with a 12-h photoperiod. For each accession, two seeds per cell were sown, and after germination, seedlings were thinned to a single plant per cell. Each tray of 96 seedlings was fertilized with ≈1.5 g of 14N–6.1P–11.6K slow-release fertilizer (Osmocote 14–14–14; Scotts, Maysville, OH). Seedlings were watered twice per day.

In 2011, when seedlings had 8 to 10 true leaves, they were transplanted to field plots at the Leyendecker Plant Science Research Center, 1.5 miles south of Las Cruces, NM. A randomized complete block design with four replications with each replication having ≈36 plants was accomplished. Plants were transplanted 10 inches apart in a single row with 3 ft between rows. The plants were grown, including fertilizer applications, using standard cultural practices for growing chile peppers in southern New Mexico (Bosland and Walker, 2004).

Once the fruit had matured on the plants in the field, a single harvest of 25 random mature fruit from each of four plants in each of the four replications was accomplished. After harvest, the fruit sample was dried and ground to a uniform powder. The extraction of the capsaicinoids and the estimation of capsaicinoid amounts followed the HPLC procedures for the short run method as described by Collins et al. (1995). The HPLC data were converted from parts per million to SHU by multiplying the parts per million by 16. Analysis of variance, least significant difference, and Duncan’s multiple range test (P ≤ 0.05) determined the significance of the observed differences and were analyzed using the statistical software, SAS (version 9.2; SAS Institute, Cary, NC).

For RAPD analysis, one accession of Capsicum annuum (‘Camelot’) and six accessions of C. chinense (‘Bhut Jolokia’, ‘Trinidad Scorpion’, ‘Trinidad 7-pot Jonah’, and ‘Douglah Trinidad Chocolate’) were planted in 1-gal plastic pots and grown in a greenhouse for DNA extraction.

When seedlings had 8 to 10 true leaves, six plants were randomly selected from each accession for DNA isolation. DNA extraction, quantification, polymerase chain reaction (PCR) amplification with RAPD markers, including the PCR thermal cycling profile used in this study are described by Baral and Bosland (2002). The RAPD primers used were OPA02, OPA04, OPA07, OPA11, OPA18, OPC02, OPC10, OPE12, OPF06, OPM04, OPAA11, and OPP07 from Oligo 10-mer kits A, C, E, F, M, AA, and PP (Operon Technologies, Alameda, CA). Primer sequences are available by request. Presence or absence of RAPD bands was scored manually. If a RAPD band was present in a particular accession, it was scored as “1”; if the band was not present, it was scored as “0.” Band intensity was not taken into account. Molecular analysis was repeated.

The RAPD markers were analyzed by the computer software, numeric taxonomy, and multivariate analysis system [NTSYSpc 2.1 (Rohlf, 1998)]. Pairwise genetic similarity index was calculated by Nei and Li’s Coefficient (Nei and Li, 1979): Sij = 2Nij/(Ni + Nj), where Nij is the number of bands shared by the samples i and j. Ni and Nj are the numbers of bands in samples i and j, respectively. The similarity for qualitative (Simqual) data function of NTSYSpc 2.1 analyzed the RAPD data using Dice’s similarity formula, which is the same as Nei and Li’s coefficient (Dice 1945). A dendrogram was generated by means of the unweighted pair-group method with arithmetic averages using the sequential agglomerative, hierarchical and nonoverlapping clustering method (Sneath and Sokal, 1973).

The growing season in 2011 was favorable for the production of fruit on all chile pepper varieties [daily maximum, minimum, and average temperatures for each day during the growing season are available from New Mexico State University (2012)]. Because the environment is known to affect the heat level of chile pepper varieties (Harvell and Bosland, 1997; Zewdie and Bosland, 2000a), having a replicated field trial with a control variety allows for the best comparison of heat levels among varieties. The HPLC analysis revealed that ‘Bhut Jolokia’ had a mean heat level of 1,019,687 SHU, which is in the range normally seen for this variety in Las Cruces, NM (Bosland and Baral, 2007). The results of the analysis for ‘Trinidad Moruga Scorpion’ indicated it also possessed an extremely high mean heat level, 1,207,764 SHU (Table 1). ‘Trinidad Scorpion’, ‘Trinidad 7-Pot Jonah’, and ‘Douglah Trinidad Chocolate’ also had high average heat levels of 1,029,271; 1,066,882; and 1,169,058 SHU, respectively.

High variability in heat levels for individual plants for a given chile pepper accession and significant differences in mean heat level for the same variety between blocks were observed. Likely explanations for these observations are due to two facts 1) heat levels in chile peppers are heavily influenced by environment and 2) the varieties can be considered landraces (i.e., genetically heterogeneous) that do not behave uniformly.

The taxonomic relationship of ‘Bhut Jolokia’ to ‘Trinidad Scorpion’ based on RAPD markers places ‘Bhut Jolokia’ in a taxonomic position between C. annuum and the other C. chinense varieties. The reason the other C. chinense varieties show greater similarity is that ‘Bhut Jolokia’ is an interspecific hybrid that has C. frutescens genes introgressed into its genome (Bosland and Baral, 2007). The polymorphic bands generated from the 12 RAPD primers were enough to show genetic differences among the chile pepper varieties. Because RAPD markers are assumed to randomly sample the genome for polymorphisms, it is expected that further sampling would not alter the overall arrangement of the varieties based on relative genetic variation very much (Votava and Bosland, 2002). Thus, from the genetic similarity index values, it can be concluded that ‘Bhut Jolokia’ is not a ‘Trinidad Scorpion’ variety grown in India or that ‘Trinidad Scorpion’ is a parent of ‘Bhut Jolokia’. Instead, they appear to be unique varieties. Furthermore, none of the pepper varieties from Trinidad and Tobago are likely to be the parent of ‘Bhut Jolokia’. The genetic similarity indexes among ‘Trinidad 7-Pot Jonah’, ‘Douglah Trinidad Chocolate’, and ‘Trinidad Scorpion’ were the closest. Strong genetic similarities among these varieties may be explained by the fact that they are open-pollinated landraces from the same island of Trinidad. It has been reported that cross-pollination in chile peppers can occur as frequently as 90% and as infrequently as 2% (Bosland and Votava, 2012). However, it is concluded that these are unique varieties because there was observed genetic separation among them. 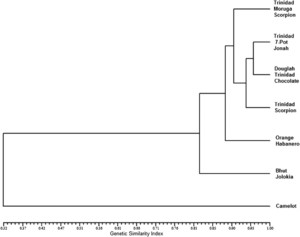 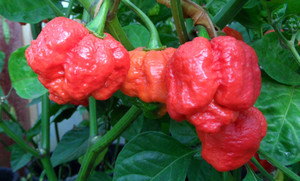