Search for other papers by R.M. Bates in
ASHS
Google Scholar
PubMedClose

Fraser fir is a valuable cut Christmas tree crop in the eastern United States, particularly in North Carolina, Michigan, and Pennsylvania (Tompkins, 2000; Williams, 2002). The species is preferred because of its fast and consistent growth habit and excellent postharvest durability (Mitcham-Butler et al., 1988). In 2010, fraser fir accounted for ≈26% of the planted cut Christmas tree crop in Pennsylvania, second only to douglas fir (Pseudotsuga menziesii) which accounted for ≈42%. On a per tree basis fraser fir is estimated to be 15% more valuable than douglas fir in Pennsylvania (U.S. Department of Agriculture, 2009). Use of fraser fir is not more prevalent because of its sensitivity to poorly drained soils (Owen, 2005). In poorly drained soils, PRR is the limiting factor in fraser fir production and is the only serious disease affecting fraser firs in Pennsylvania.

Multiple species of Phytophthora are known to contribute to root rot in fraser fir (Benson et al., 1976; Kuhlman and Hendrix, 1963; Quesada-Ocampo et al., 2009; Shew and Benson, 1981). Most research has focused on P. cinnamomi (Benson and Grand, 2000). In diseased fraser fir specimens sent to the Pennsylvania Department of Agriculture Plant Diagnostic Laboratory between 1986 and 2011, P. cactorum, P. cryptogea, and P. drechsleri were the most common causes of PRR (T. Olson, personal communication). Phytophthora cryptogea and P. drechsleri have very similar morphology and are usually separated based upon the ability of P. drechsleri to grow at 35 °C (Erwin and Ribeiro, 1996; Ho and Jong, 1991; Mostowfizadeh-Ghalamfarsa et al., 2010).

The use of fungicides to prevent PRR in fraser fir production is most common at the seedling stage. The efficacies of various fungicides in preventing PRR in fraser fir have been tested with P. cinnamomi. Bruck and Kenerley (1981, 1983) reported that drench applications of metalaxyl prevented PRR in fraser fir seedlings planted in a soilless substrate in greenhouse and nursery bed settings. Benson and Grand (2000) reported that isolates of P. cinnamomi recovered from fraser fir in field settings and nursery transplant beds were sensitive to metalaxyl in plate tests in a laboratory setting. Benson et al. (2003, 2004) reported PRR prevention in container-grown fraser fir seedlings in soilless substrate with dimethomorph, mixed results with fosetyl-aluminum and mefenoxam as a drench treatment, and poor results with hydrogen dioxide. Benson et al. (2006) found that mefenoxam as a soil spray and fosetyl-Al as a foliar spray were both able to delay PRR onset in fraser fir in a field setting. In North Carolina, mefenoxam is recommended if fungicide control of PRR in fraser fir is required (Sidebottom and Jones, 2004). The effectiveness of fungicides to prevent PRR in fraser fir incited by the species of Phytophthora common in Pennsylvania, P. cactorum and P. drechsleri, has not been studied. In Pennsylvania, recommended fungicides for PRR of firs include dimethomorph, hydrogen dioxide, mefenoxam, and propamocarb hydrochloride (Pennsylvania Department of Agriculture, 2009). The objectives of this study were to examine the efficacy of those four fungicides and fosetyl-Al in prevention of PRR incited by P. cactorum and P. drechsleri in fraser fir seedlings, as well as to test for differences between soil spray and drench treatments of mefenoxam.

This study was conducted in Summer 2010 and Summer 2011 at the Russell E. Larson Agriculture Research Center at Rock Springs in Pennsylvania Furnace, PA (lat. 40°42′N, long. 77°56′W). Inoculation experiments were conducted both years in 112 outdoor raised planting boxes 33 inches by 12 inches by 7.25 inches (volume 2871 inch3). The boxes were filled with Hagerstown silt loam containing enough subsoil to classify as clay loam in 2010 and a mixture of topsoil classified as sandy loam in 2011. The factorial experiments contained three factors, fungicide (7 levels), P. cactorum (2 levels), and P. drechsleri (2 levels), for a combination of 28 treatments. Treatments were assigned on the box level, which was considered an experimental unit. A randomized complete block design was used with four blocks.

On 28 May 2010 and 4 May 2011, fraser fir 2-year-old seedlings were planted. Each box had 10 seedlings arranged in a row with 3-inch spacing between plants. Irrigation lines were installed with four spray stakes in each box. Watering was done at low pressure, resulting in drip irrigation; ≈2 cm of water was applied daily. Fertilization was provided every 4 weeks during the experiment with a 368 mg·L−1 nitrogen (N) solution (21N–3.1P–5.8K; Scotts, Marysville, OH).

Isolates of P. cactorum (Phytophthora Database ID: PD_00551) (Kang, 2012a) and P. drechsleri (Phytophthora Database ID: PD_00640) (Kang, 2012b) were obtained from the Pennsylvania Department of Agriculture Plant Diagnostic Laboratory. The isolates were originally collected from diseased fraser fir seedling roots submitted to the laboratory. Inoculum of these isolates was cultured on long grain rice (Oryza sativa) using the methods of Holmes and Benson (1994). Long grain rice (25 g) was placed in an erlenmeyer flask (250 mL) with 18 mL of deionized water, stirred, capped with foil, and autoclaved 30 min. After sitting 24 h, the rice was stirred with a sterile rod, then autoclaved 30 min. After cooling, three 1-cm-diameter plugs of V8 agar containing Phytophthora cultures were placed in the flask. Each day for the next 14 d, the flasks were bumped against a firm, padded surface to ensure the rice grains remained separate and the contents were mixed. On 14 June 2010 and 24 May 2011, the Phytophthora inoculum was applied. Each Phytophthora species was a factor with levels of present and absent, the absent treatment was a control of plain autoclaved rice. Each plant received 0.5 g of rice from one level of each of the P. cactorum and the P. drechsleri factors sprinkled on the soil surface within a 1-inch radius of the stem. This resulted in four Phytophthora treatments, which are addressed by these titles: Phytophthora control (P. cactorum absent + P. drechsleri absent), PC (P. cactorum present + P. drechsleri absent), PD (P. drechsleri present + P. cactorum absent), and PC+PD (P. cactorum present + P. drechsleri present).

The experiment lasted 8 weeks in 2010 and 9 weeks in 2011. A weather station at the Russell E. Larson Agriculture Research Center provided air temperature and precipitation data throughout the experiments. Foliar disease ratings, adapted from the top ratings of Hinesley et al. (2000), were recorded for each seedling at the conclusion of the experiment. The ratings were as follows: 1 = healthy (no necrosis), 2 = mild symptoms (1% to 33% necrosis), 3 = moderate symptoms (34% to 67% necrosis), 4 = severe symptoms (68% to 99% necrosis), and 5 = dead (100% necrosis). The mean foliar disease rating of seedlings in each box was used for data analysis. Weekly plant mortality was recorded as a proportion of the plants in each box that were dead. In 2011, at the conclusion of the experiment, all plants were harvested and oven dried at 150 °F for 10 d, then shoot and root dry weights were recorded.

Following the experiments, samples of dead roots were plated to detect the presence of Phytophthora. In preparation for plating, the roots were washed under running water, soaked in a 70% ethanol solution for 1 min, rinsed with deionized water, then blotted dry with paper towels. Sections of root 2–3 cm long were cut and placed on semiselective media containing corn meal agar, pimaricin, ampicillin, rifampsin, and pentachloronitrobenzene [PARP (Jeffers and Martin, 1986)]. Transfers were made to V8 agar. Morphological identification was carried out under a microscope using the key of Gallegly and Hong (2008).

A laboratory plating test was conducted to determine the sensitivity of the P. cactorum and P. drechsleri isolates used in this experiment to fosetyl-Al, mefenoxam, and propamocarb hydrochloride. Plugs (5 mm diameter) of mycelium were cut from the edge of cultures growing on V8 agar and placed on V8 agar plates containing the fungicides at label recommended rates (expressed as rate of fungicide per milliliter of medium: 3.7 mg·mL−1 fosetyl-Al, 10 μL·mL−1 hydrogen dioxide, 0.1 μL·mL−1 mefenoxam, 9.8 μL·mL−1 propamocarb hydrochloride). Control plates contained no fungicide. Mycelium growth was measured on three axes on 24-h intervals.

Mixed model analysis of variance for foliar disease ratings (1–5 scale)z of fraser fir seedlings exposed to Phytophthora and fungicide treatments at the conclusion of the 2010 and 2011 experiments.y 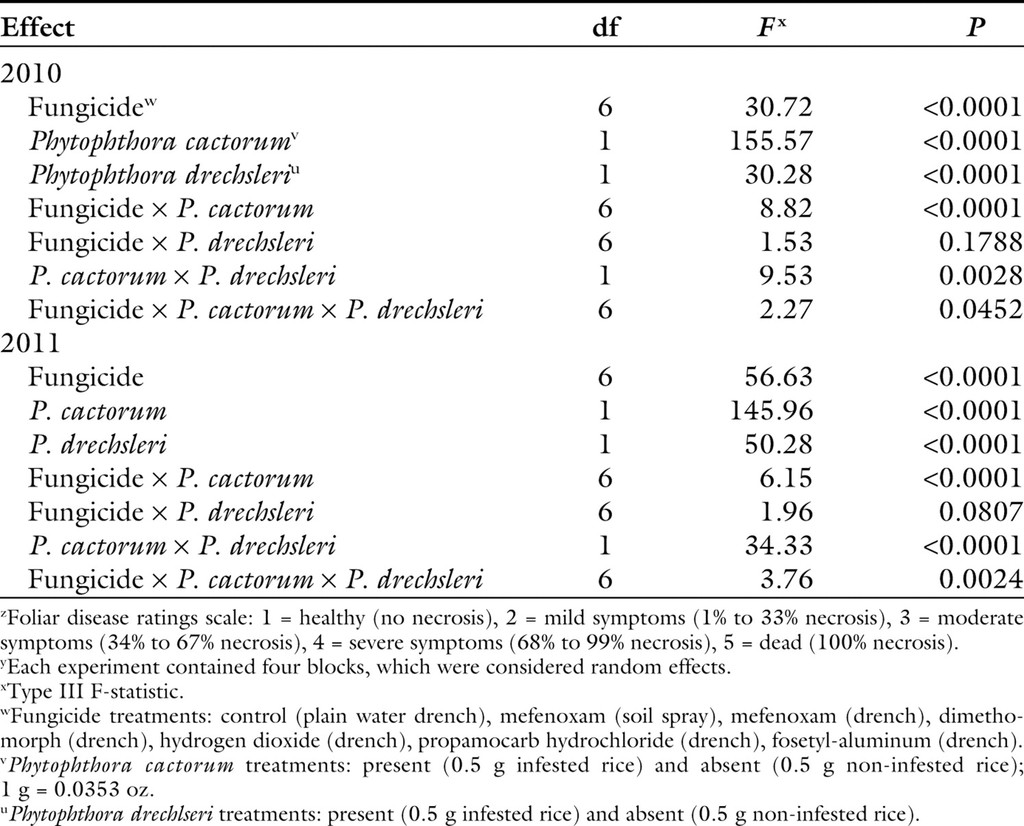 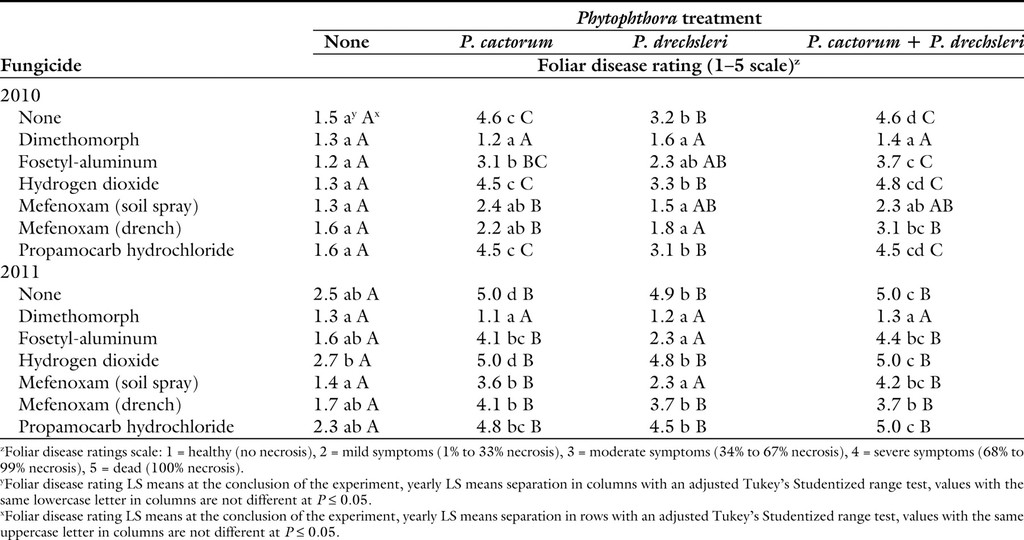 Mortality of seedlings exposed to Phytophthora had significant differences between fungicide treatments beginning in week 4 of the experiments, with the exception of the PC + PD treatment in 2011, which had significant differences in week 3 (Fig. 1) (P ≤ 0.05). Seedlings in the Phytophthora control treatment did not have significant differences in seedling mortality between the fungicide treatments in either year of the experiments (Fig. 1). Dimethomorph treatment resulted in the lowest mortality of seedlings exposed to P. cactorum (Fig. 1) (P ≤ 0.05). In 2010, seedlings treated with mefenoxam and fosetyl-Al provided had substantially lower mortality rates when exposed to the PC treatment compared with the fungicide control, but that reduction was not as great in 2011 [percentage final mortality less than the fungicide control: mefenoxam-drench 2010 = 70%, 2011 = 22.5%; mefenoxam-spray 2010 = 57%, 2011 = 37.5%; fosetyl-Al 2010 = 42%, 2011 = 30% (Fig. 1)]. Mortality in seedlings exposed to the PD treatment was lowest with dimethomorph, mefenoxam, or fosetyl-Al treatment (Fig. 1) (P ≤ 0.05). In 2011, the mefenoxam drench treatment was not as effective in reducing seedling mortality caused by P. drechsleri as it had been in 2010 (mortality percentage: 2010 = 10%, 2011 = 67.5%).

Dry shoot and root weight data from 2011 had significant differences based upon fungicide (P < 0.0001), P. cactorum (P < 0.0001), and P. drechsleri (P < 0.005) treatments, as well as an interaction between the P. cactorum and P. drechsleri treatments (Roots: P = 0.0012; Shoots: P = 0.0068). Examination of simple effects revealed that when either P. cactorum or P. drechsleri was present, dry weight of seedling roots and shoots was lower than that of seedlings in the Phytophthora control (P < 0.0001). However, seedling dry weight was not significantly different in the PC, PD, and PC + PD treatments. This means that both species caused the same reduction in root and shoot mass, and the two species together did not produce a synergistic effect. Plants treated with dimethomorph and exposed to Phytophthora had greater root dry weights than those treated with propamocarb hydrochloride or the fungicide control (Table 3). Dimethomorph, fosetyl-Al, and mefenoxam as a soil spray all had no differences in fraser fir root and shoot dry weights regardless of Phytophthora treatment. More differences in root and shoot weight might be expected if the experiment had been extended.

Fraser fir seedling root and shoot dry weight least square (LS) means at the conclusion of the 2011 experiment with fungicide treatments and exposure to Phytophthora treatments.

Mycelium growth of Phytophthora on V8 agar amended with fungicidesz and a non-amended control after 5 d.

Successfully managing PRR in fraser fir Christmas tree production requires an integrated control program. Critical components include avoiding exposure to Phytophthora inoculum through sanitation and reducing the activity of Phytophthora through ensuring proper soil drainage, which may be accomplished by proper site selection and site preparation before planting (Sidebottom and Jones, 2004). Chemical prevention of PRR is best used during the seedling or transplant bed stages of production as an occasional supplement and should not be viewed as a primary control measure. Use of fungicides to prevent PRR in the field stage of fraser fir Christmas tree production is not common (Benson et al., 2006). Caution should be taken in extrapolating the results of fungicide tests with seedlings to field conditions. 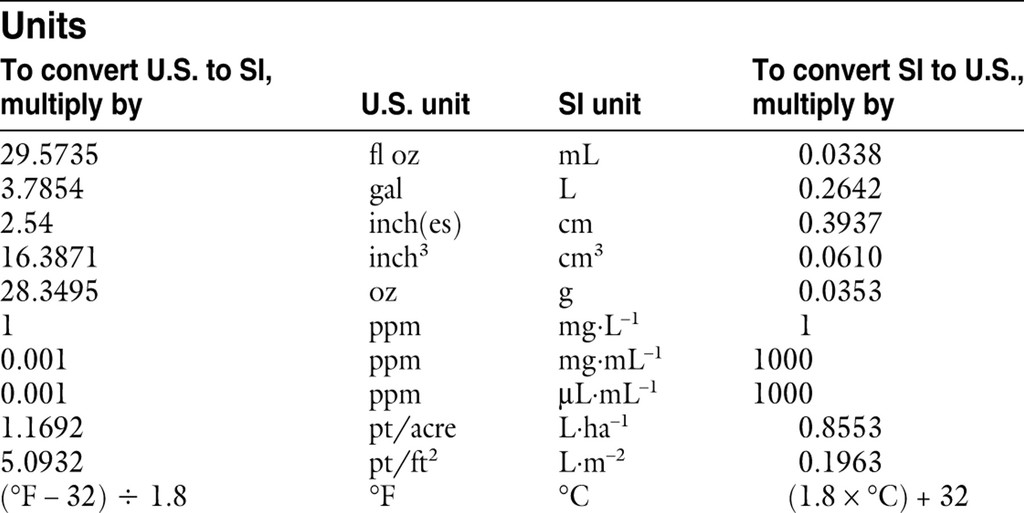 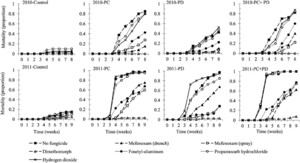