It is desirable for commercial potted, bedding, and foliage plants to be well-branched and compact in habit (Roh and Lawson, 1998). Ideally, these characteristics are achieved genetically through breeding and selection during crop development. However, when compact height and high branch number does not occur naturally, environmental or mechanical manipulation by reducing the difference in day and night air temperatures (DIF) or pinching, respectively, can be used to suppress height and increase branch number (Andersen and Andersen, 2000). Chemical suppression of stem elongation and increased branching is possible with the use of different types of PGRs. For example, applications of inhibitors of gibberellin synthesis or ethylene generators will suppress cell elongation and, thus, stem length (Rademacher, 2000). Additionally, exogenous applications of a cytokinin or ethylene generators can suppress apical dominance and release axillary buds by lowering the ratio of auxin to cytokinin or ethylene, thereby enhancing branching (Srivastava, 2002).

PGRs are regularly applied in commercial ornamental plant production to improve the ornamental and aesthetic characteristics of plants, including stem length and branching (Gent and McAvoy, 2000). There are several methods used to apply PGR solutions, including: bulb, tuber, or rhizome soaks or dips (Currey and Lopez, 2010; Krug et al., 2005); liner dips (Blanchard and Runkle, 2007; Schnelle and Barrett, 2010); substrate drenches (Currey and Lopez, 2011; Sellmer et al., 2001); and foliar sprays (Gibson and Whipker, 2003; Whipker and Dasoju, 1998). Foliar sprays have the advantage of being a relatively easy application method, inexpensive to apply with respect to labor, often use less total chemical, and are appropriate for nearly every PGR. As such, foliar sprays are the most common method employed for PGR application (Gent and McAvoy, 2000).

Though spray application of most PGRs elicit an effective response, the efficacy of different chemicals and concentrations can vary among and within genera, species, and cultivars (Seely, 1979). For example, Warner and Erwin (2003) and Nordwig (1999) reported variation among several hibiscus (Hibiscus sp.) and milkweed species (Asclepias sp.), respectively, to different PGRs at varying concentrations when applied as sprays. Similarly, Boldt (2008), Gibson and Whipker (2001), and Krug et al. (2007) reported variation among cultivars of angelonia (Angelonia angustifolia), ornamental cabbage and kale (Brassica oleracea), and tulip (Tulipa gesneriana) in response to different PGRs.

There are 139 species of kalanchoe (Descoings, 2005). However, only florists’ kalanchoe (Kalanchoe blossfeldiana) is widely grown as an ornamental plant (Dole and Wilkins, 2005). We identified numerous kalanchoe species with commercial ornamental crop potential based on unique flowering and/or vegetative characteristics (Currey, 2009; Currey and Erwin, 2010, 2011a, 2011b). While these species possess unique ornamental floral, foliar, and/or vegetative qualities, they are neither compact nor free-branching (Currey and Erwin, 2011a). The use of chemical PGRs to inhibit stem elongation, enhance branching, or both may aide in adapting these species to ornamental flowering plant culture (Davis and Andersen, 1989).

Various PGRs effectively inhibit stem elongation of K. blossfeldiana and K. porphyrocalyx (Adriansen, 1989; Carlson et al., 1977; Cathey and Stuart, 1961; Hwang et al., 2008; Lee et al., 2003; Nightingale, 1970; Pertuit, 1973; Ueber, 1998; Zimmer, 1985) and increase or enhance branching for K. blossfeldiana and K. tomentosa (Lyons and Hale, 1987; Pertuit, 1973). There is little, or no, information on what PGRs are effective on the species previously identified with ornamental potential. Therefore, our objectives were to assess the efficacy of various PGRs on stem elongation and branching of several kalanchoe species with ornamental characteristics.

On 19 Dec. 2008, terminal shoot-tip cuttings of K. marnieriana, K. rosei, and K. streptantha with about three to five nodes, depending on the species, were harvested from vegetative stock plants. The lowest set of leaves was removed from cuttings, and cuttings were dipped in talc powder containing 1000 ppm indole-3-butyric acid (Hormodin 1; OHP, Mainland, PA) to promote rooting. Cuttings were then placed in a soilless high-porosity substrate composed of pine bark, canadian sphagnum peat, vermiculite, and coarse perlite (SB500; Sun Gro Horticulture, Bellevue, WA) in 128-cell plug trays (25-mL individual cell volume; T.O. Plastics, Clearwater, MN). Air temperature and light were as described above. Substrate was warmed to 21 °C with heat mats placed under trays. Cuttings were hand-misted daily and irrigated to maintain moist substrate. After 1 week, cuttings were irrigated with tap water and fertilized once weekly as previously described.

After 4 weeks, rooted cuttings were transplanted into square plastic pots with 2.5-inch sides (15.3 inch3 volume) filled with a high-porosity substrate (SB500). Pots were then placed back in the environment in which they were rooted without bottom heat or misting. Plants were irrigated with tap water and fertilized once weekly as previously described and were pinched to a single node 2 weeks after planting, resulting in two main shoots per plant.

Two weeks after pinching, five plants of each species were sprayed with: deionized water; 15, 30, or 60 ppm ancymidol (Abide; Fine Americas, Walnut Creek, CA); 75, 150, or 300 ppm benzyladenine (Configure, Fine Americas); 750, 1500, or 3000 ppm chlormequat chloride (Citadel, Fine Americas); 1250, 2500, or 5000 ppm daminozide (Dazide 85 WSG, Fine Americas); 250, 500, or 1000 ppm ethephon (Florel; Southern Agricultural Insecticides, Palmetto, FL); 10, 20, or 40 ppm paclobutrazol (Piccolo, Fine Americas); or 5, 10, or 20 ppm uniconazole (Concise, Fine Americas). Concentrations of each a.i. were selected to span published recommended ranges commonly used for foliar applications in flowering potted plant production (Dole and Wilkins, 2005; Whipker et al., 2011). Solutions were applied to plants at a rate of 2 qt/100 ft2 in a laboratory and allowed to dry for 4 h at 21 °C. Plants were then returned to the greenhouse environment previously described and grown for 4 weeks. Plants were irrigated with tap water as needed and fertilized weekly as previously described. The PPF and air temperature at canopy height were measured, and environmental data are reported in Table 1.

The experiments were designed as a completely randomized design for each species. There were five replicates (individual plants) per species per treatment and two samples (shoots) per replicate. Analyses of variance and mean separation by Tukey’s honestly significant difference test at P ≤ 0.05 were performed using SPSS (version 17.0; IBM Corp., Armonk, NY). 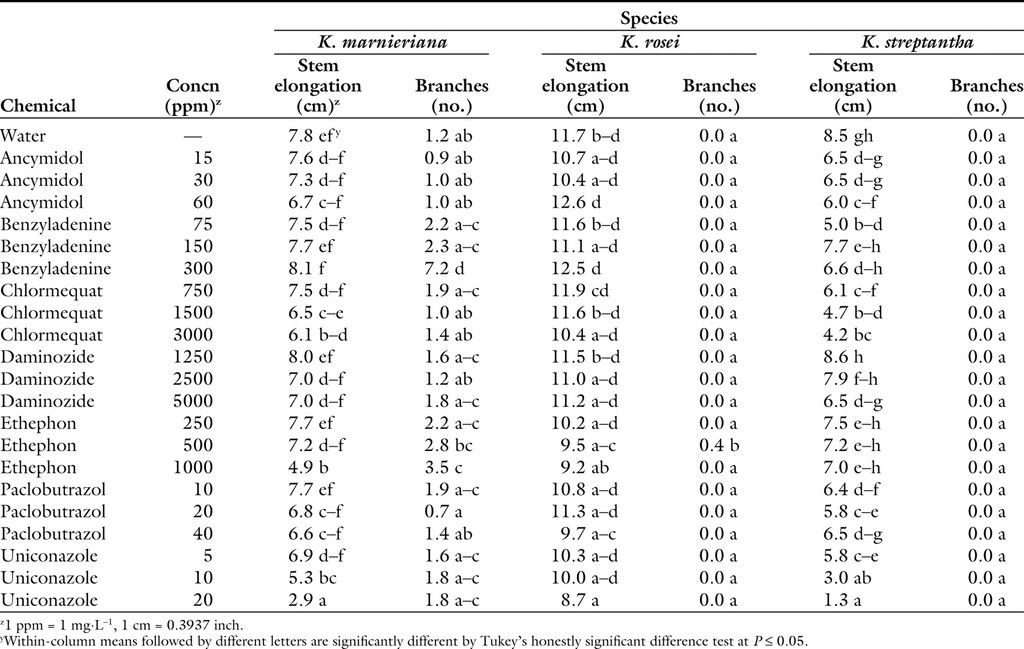 The highest concentrations of ethephon, paclobutrazol, and uniconazole suppressed stem elongation of K. fedtschenkoi by 5.9 cm (61%), 3.0 cm (31%), and 4.2 cm (44%) compared with untreated plants (Table 3). Stem elongation of K. glaucescens was controlled by every PGR, though ancymidol, ethephon, paclobutrazol, and uniconazole suppressed stem elongation more than chlormequat chloride and daminozide. Paclobutrazol and uniconazole were also the most effective in suppressing stem elongation of K. pumila by 2.5 cm (39%) and 3.0 cm (47%), respectively. Benzyladenine and ethephon increased branch number of K. fedtschenkoi up to 1.6 and 2.8 branches, respectively, and K. glaucescens by 3.6 and 1.3 branches, respectively, compared with untreated plants. No PGR affected branch number of K. pumila. 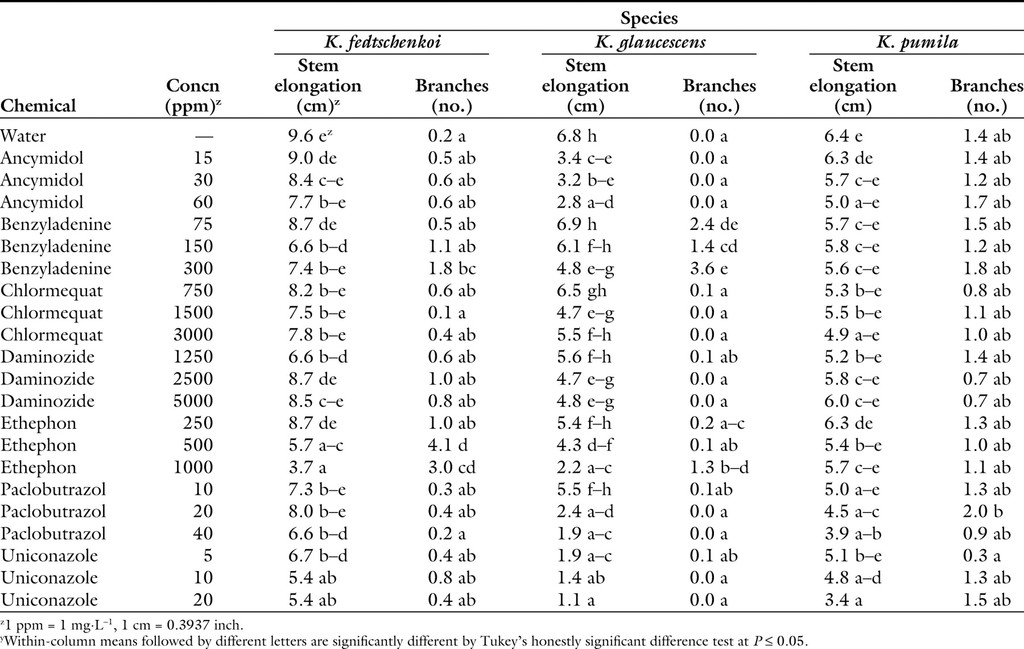 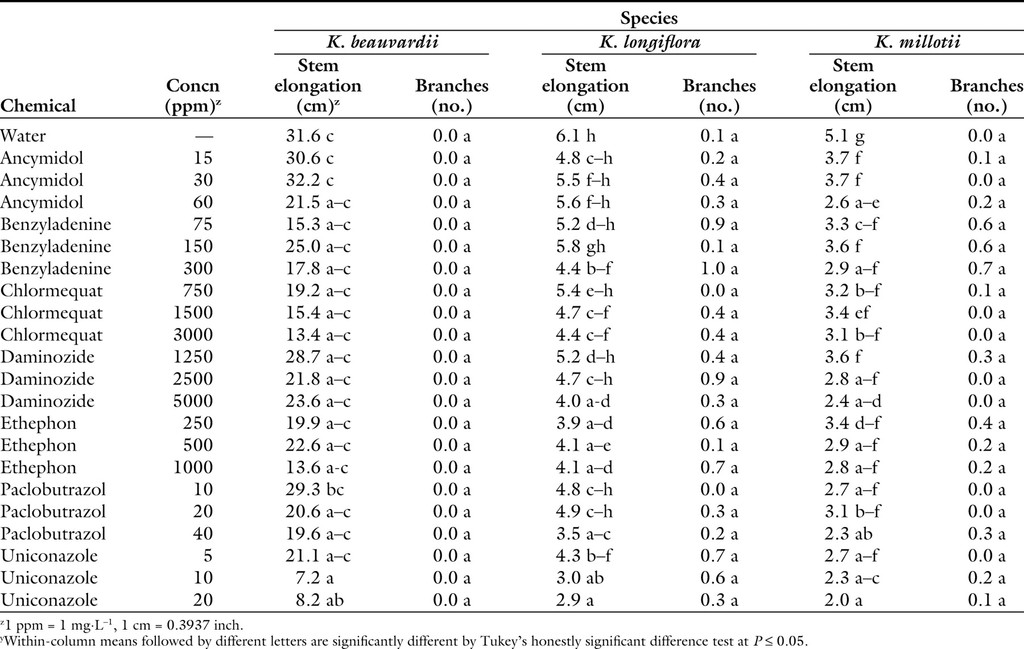 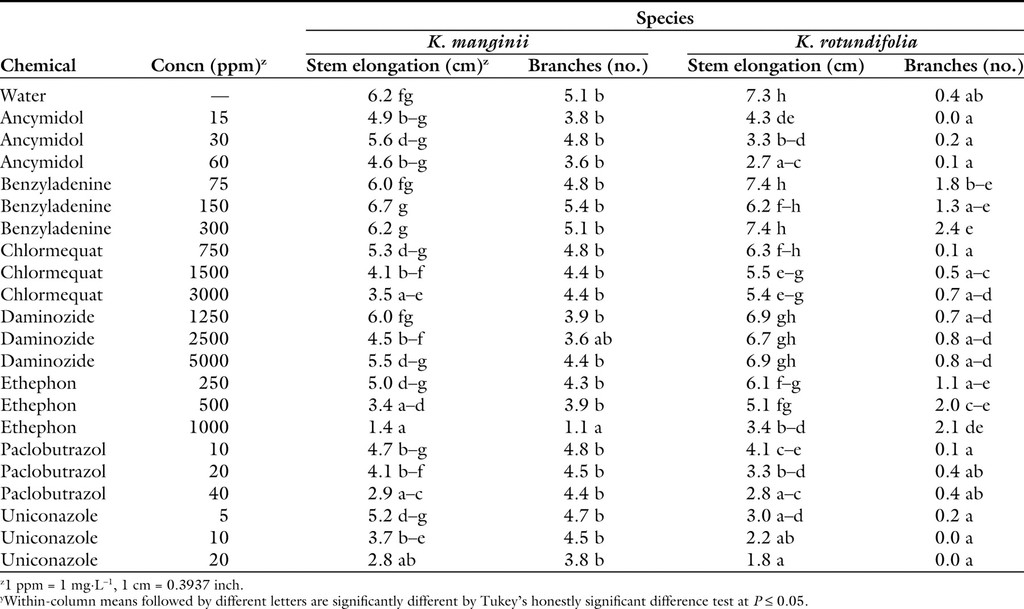 The efficacy of PGR applications in controlling stem elongation varied with species (Tables 2–5). Similar variation in efficacy of PGRs for plant height suppression was reported for kalanchoe, primarily among K. blossfeldiana cultivars (Adriansen, 1989; Carlson et al., 1977; Cathey and Stuart, 1961; Hwang et al., 2008; Lee et al., 2003; Nightingale, 1970; Pertuit, 1973; Ueber, 1998; Zimmer, 1985). In general, paclobutrazol and uniconazole appeared to be the most efficacious a.i. among PGRs for suppressing stem elongation across kalanchoe species in this study (Tables 2−5). There were several cases where stem elongation was less for several PGRs as concentration increased, though there were not significant differences when compared with untreated plants (Tables 2−5). This may indicate that PGR concentrations above the range used in this study may warrant evaluation. Or, as in the case for the narrow-leaved and vining K. beauvardii¸ achieving uniform coverage from foliar sprays may be challenging, thus contributing to variation in application coverage and subsequent plant response.

The highest concentrations of PGRs such as chlormequat chloride and daminozide did not significantly suppress stem elongation compared with untreated plants for some species (Tables 2–5). However, most concentrations of paclobutrazol and uniconazole significantly suppressed stem elongation for many species in this study (Tables 2–5). While chlormequat chloride and daminozide are absorbed primarily by leaves, paclobutrazol and uniconazole are absorbed primarily by the stems and roots (Barrett, 2001). The broad efficacy in suppressing stem elongation across species by paclobutrazol and uniconazole may be attributed to PGR solution being applied to the substrate surface during foliar applications and subsequent root uptake. Alternatively, perhaps the stem is more effective at absorption of PGRs. The epidermal layer of stems and leaves of plants from arid areas is covered with a thick cuticle to minimize water loss (Beck, 2010). Many kalanchoe are native to arid areas and have a thick, waxy cuticle (Rauh, 1995), which in turn may reduce the efficacy of foliar PGR applications. Therefore, substrate drenches may be an application method with promise for some taxa.

Branching of several kalanchoe species was affected by benzyladenine and ethephon (Tables 2–5). Although Pertuit (1973) reported that foliar sprays containing dikegulac sodium and ethephon increased branch number of K. blossfeldiana, many modern K. blossfeldiana cultivars are free-branching as a result of targeted breeding and selection for that trait (Mikkelsen, 1987). However, many of the species in this study are not (Currey and Erwin, 2011a). Therefore, the ability to increase branching using foliar PGR applications as opposed to mechanically (i.e., pinching) is a cost-effective method to improve the ornamental quality of germplasm.

Phytotoxicity was observed only when ethephon was applied to K. manginii (Table 5). When ethephon concentration increased to 1000 ppm, the apical meristem was distorted, resulting in stunted plants with few unfolded leaves and branches. While not phytotoxic per se, severe stunting was observed when uniconazole was applied to K. glaucescens (Table 3) and K. rotundifolia (Table 5). At 5 and 10 ppm uniconazole, K. glaucescens stems were highly compressed, and as concentrations increased to 20 ppm, both K. glaucescens and K. rotundifolia were very stunted.

The efficacy of PGRs in controlling stem elongation is related to plant growth which, in turn, is influenced by cultural practices and the greenhouse environment (Blanchard and Runkle, 2011; Faust, 2011; Warner and Erwin, 2001; Whipker et al., 2011). For example, stem elongation may increase under a positive DIF and low-light conditions. Alternatively, higher daily light integral (DLI) and average daily temperatures (ADT) can increase growth potential. Therefore, when stem elongation or growth potential increases because of environmental conditions, PGR efficacy may be reduced and vice versa. In our experiments, the DIF was ≈4 °C for all four experiments (Table 1). However, the ADT and DLI increased with each experiment (Table 1). While we believe our results provide a basis to select a.i. and concentrations appropriate for suppressing stem elongation of the kalanchoe species studied in this experiment, different environmental conditions may elicit a slightly different response to PGRs.

Our data indicate that stem elongation of the 11 kalanchoe species in this study may be controlled with foliar application of commonly available PGRs. Furthermore, branching of several species may also be enhanced using PGR sprays. While we have identified effective chemicals here, we encourage producers to conduct trials to determine appropriate concentrations required for their unique production scenarios, locations, and facilities. Additionally, the concentration of PGRs required for successful height control and branching will depend on the desired plant height and form.