Numerous options are available when selecting cultivars. It is not uncommon for a cultivar to perform well in one region or state and poorly in another. This can make selection time-consuming and leave growers unsure about how new cultivars will perform on their farms. To provide growers in Pennsylvania with regionally appropriate and statewide recommendations, a 10-year-coordinated cultivar evaluation program was started in 2008 with funding from the Pennsylvania Vegetable Research and Marketing Board.

Green bell peppers were the first crop evaluated. They were selected through a survey of growers attending the 2006 Western Pennsylvania Vegetable and Berry Growers Seminar as being the number one crop on which they wanted research to be conducted. Bell peppers are an important crop for Pennsylvania. In fact, PA has the largest number of bell pepper growers in the United States with 1038 of 4338 vegetable growers producing them [U.S. Department of Agriculture (USDA), 2009]. They are often grown on diversified vegetable farms and sold in the fresh market (USDA, 2009). In 2008–09, 16 cultivars, including one standard, ‘Paladin’, were evaluated in the field and judged on yield characteristics.

Evaluations were conducted in three locations: southwestern, central, and southeastern Pennsylvania. Locations were selected to represent varying environmental conditions across the state. Results from individual locations were used in establishing regionally appropriate recommendations. This approach also allowed development of statewide recommendations by determining which cultivars performed well across the evaluation sites. These cultivars can be considered widely adaptable as they exhibited consistently favorable yields when grown in the varying environments encountered at each site over the 2-year evaluation period and with diverse cultural methods employed at each location.

Cultivars evaluated were selected on the basis of their potential to produce higher yields than the standard cultivar Paladin (Table 1). ‘Paladin’ has been the only cultivar listed yearly as a recommended cultivar in the Commercial Vegetable Production Recommendations guide since 2001 (Orzolek et al., 2001). Additionally, it has resistance to phytophthora root rot, an important disease in pepper production. All the cultivars evaluated were blocky in shape and harvested green.

Cultivars and seed sources of green bell peppers grown in central, southeastern, and southwestern Pennsylvania in 2008–09. 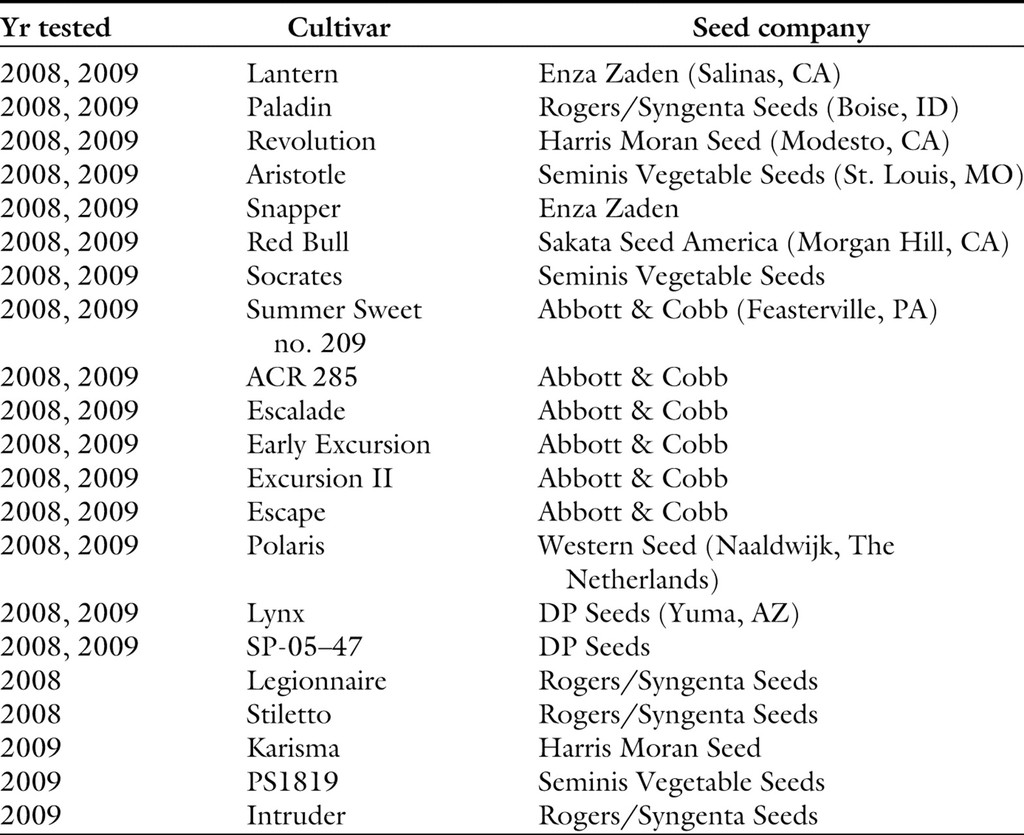 The cultivars were arranged in a randomized complete block design with four replications and 20 plants per cultivar in a block. Black embossed plastic mulch (1 mil; Sigma Plastics Group, Allentown, PA) with drip tape (T-Tape model 508–12–450; John Deere, Moline, IL) centered on 3-ft-wide and 6-inch-high raised beds, was applied before transplanting at all locations. Pests were managed in accordance with recommendations for commercial production of green bell peppers (Orzolek et al., 2008).

At the central Pennsylvania site, field planting of ≈10- or 6-week-old transplants occurred on 13 June 2008 and 20 May 2009, respectively. Plants were spaced 12 inches apart in a single row staggered to the drip line on beds on 7-ft centers. Harvest began on 25 July 2008 and 7 Aug. 2009 and ended on 29 Sept. 2008 and 14 Sept. 2009. The soil was a Hagerstown silt loam. Adhering to commercial recommendations for Pennsylvania, nitrogen (N) was applied both years at a rate of 75 lb/acre N (Orzolek et al., 2008). Sixty percent was applied preplant as urea and 40% was applied via fertigation in five weekly applications using 20N–4.4P–16.6K (Peat-Lite Special; Olympic Horticultural Products, Mainland, PA). Preseason soil analysis revealed phosphorus (P) and potassium (K) soil levels to be within optimum ranges in both years.

At the southeastern Pennsylvania site, field planting of ≈7-week-old transplants occurred on 3 June 2008 and 2009. Plants were arranged in a double row with 18-inch spacing between plants in a row and between rows. Beds were spaced on 10-ft centers. Plants were staked both years using a modified Florida weave system. Harvest began on 29 July 2008 and 3 Aug. 2009 and ended on 14 Oct. 2008 and 1 Oct. 2009. The soil was a Hagerstown silt loam. Nitrogen was applied both years at a rate of 75 lb/acre N (Orzolek et al., 2008) through weekly fertigation events beginning 2 weeks after transplanting. Phosphorus and K were applied throughout the season based on tissue test results.

Cultural practices varied in each year of the evaluation in southwestern Pennsylvania. In the 2008 planting at Janoski's Farm, plants were placed in single, nonstaked rows with 12-inch spacing between plants. Beds were on 5-ft centers. In addition, 700 lb/acre of 19N–8.3P–15.8K were added preplant to supply 133 lb/acre N to the Dormant silt loam.

The 2009 planting system at Triple B Farms used a double row with plants staggered on each side of the drip line with 12-inch spacing in each row of the pair. Beds were on 5-ft centers. Plants were staked with a modified Florida weave system. The field consisted of a Guernsey silt loam. Soil analysis revealed pH, P, and K soil levels to be below the optimum range. Adhering to recommendations, 150 lb/acre P and 150 lb/acre K were broadcast preplant, along with pelleted lime at 200 lb/acre before rototilling and laying plastic. Nitrogen was applied at a rate of 150 lb/acre with 58% applied preplant as urea and 42% applied via fertigation in weekly applications.

In 2008, the number of marketable fruit produced was not different between cultivars (Table 2). In 2009, the cultivars Summer Sweet no. 209, Excursion II, Karisma, Revolution, and Lantern produced more fruit than the standard cultivar Paladin, whereas cultivar Socrates produced fewer fruit.

Number and weight of marketable, large [>4-inches (10.2 cm) diameter], and unmarketable fruit of several cultivars of green bell peppers grown in central Pennsylvania in 2008–09. Values are the means of four replications. 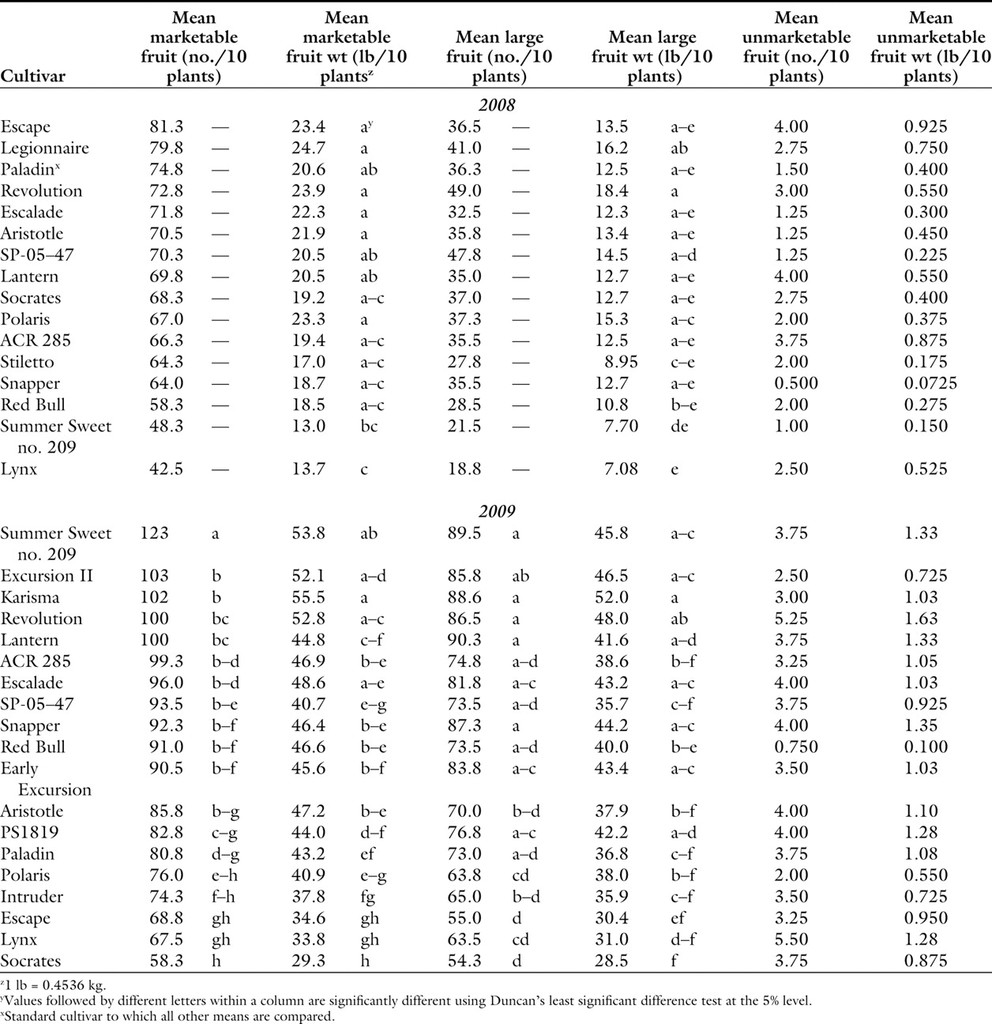 Very few peppers were unmarketable (Table 2). Differences in unmarketable yields between cultivars were not detected in either year of the evaluation.

Number and weight of marketable, large [>4-inches (10.2 cm) diameter], and unmarketable fruit of several cultivars of green bell peppers grown in southeastern Pennsylvania in 2008–09. Values are the means of four replications. 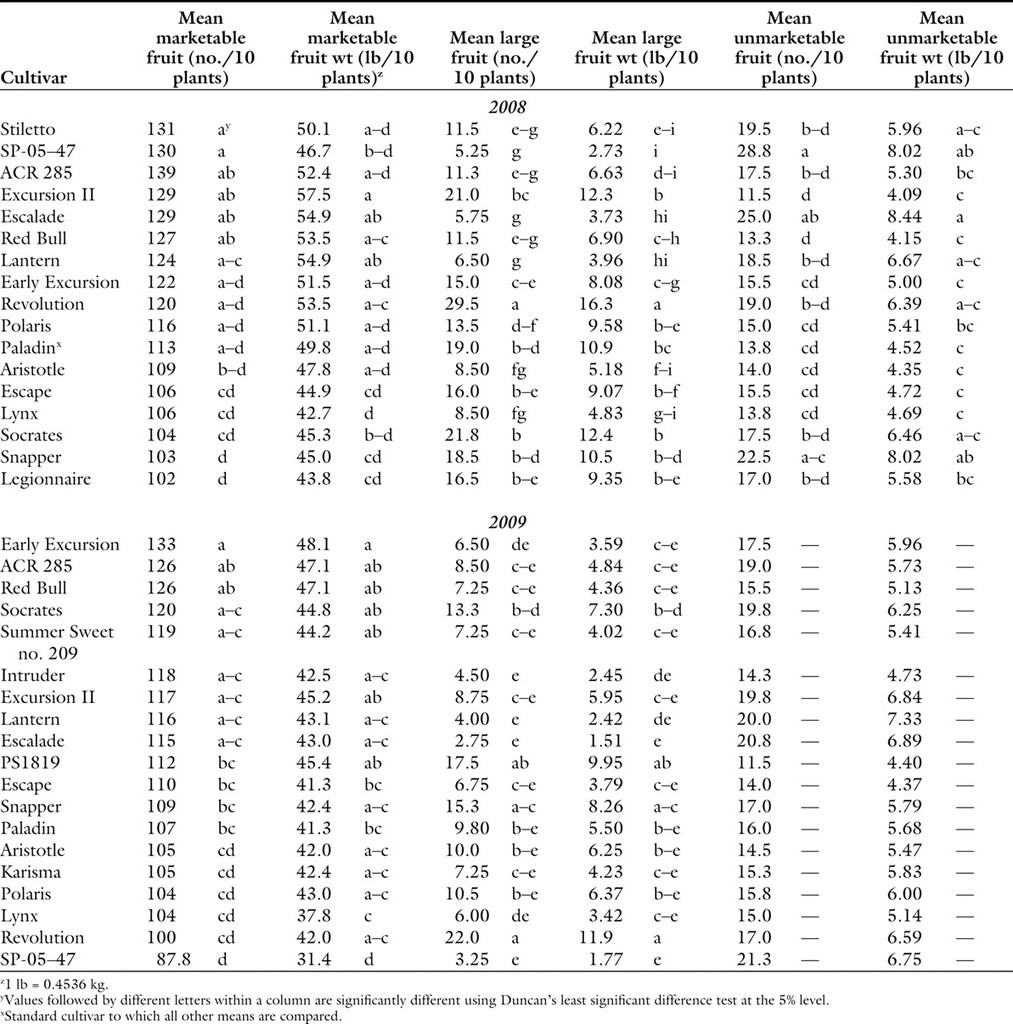 On the basis of marketable weight and number all cultivars, except SP-05–47 are recommended. ‘Revolution’ produced higher yields of large-sized fruit than ‘Paladin’. The remaining cultivars produced yields of large-sized fruit that were comparable or lower than ‘Paladin’. The cultivars Stiletto, Legionnaire, Karisma, Intruder, and PS1819 showed potential based on marketable yields; however, as they were only evaluated 1 year, definitive conclusions cannot be drawn.

Number and weight of marketable, large [>4-inches (10.2 cm) diameter], and unmarketable fruit of several cultivars of green bell peppers grown in southwestern Pennsylvania in 2008–09. Values are the means of four replications. 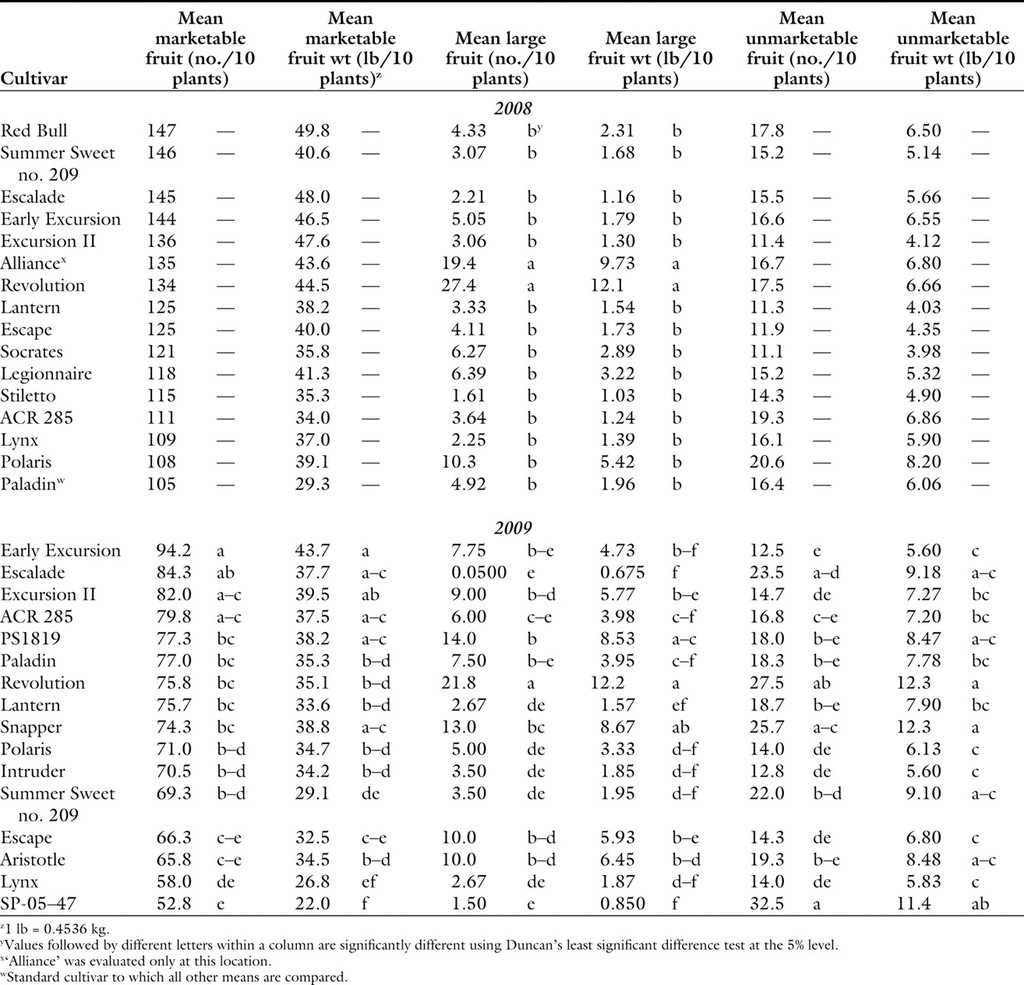 Although the weight of marketable fruit was numerically similar in both years of the study, there was a trend where the number of marketable fruit was less in 2009 compared with 2008. Each grower cooperator used their standard cultural practices that differed in plant spacing, the use of staking, and the rate of fertilizer applied. Discrepancies in the number of marketable fruit are likely a function of these differences. For example in 2008, a single row with 12 inches between plants was used, whereas in 2009 a double row with 12-inch spacing between plants in a row was used. Several studies have found the spatial arrangement of pepper plants to affect yield (Decoteau and Graham, 1994; Kahn and Leskovar, 2006; Locascio and Stall, 1994).

All cultivars, except Lynx and SP-05–47, are recommended in terms of marketable yield. ‘Revolution’ produced higher yields of large-sized fruit than ‘Paladin’. The remaining cultivars produced yields of large-sized fruit that were comparable to ‘Paladin’. ‘PS1819’ and ‘Intruder’ showed potential in terms of marketable yields and ‘Alliance’ in terms of large yields; however, as they were only evaluated 1 year, definitive conclusions cannot be drawn.

‘Paladin’ has been recommended in Pennsylvania for the past 10 years because of good yielding characteristics and phytophthora resistance. In determining whether a cultivar was suited for statewide recommendation, the criterion was that it must have produced comparable yields to ‘Paladin’ in a minimum of two of the evaluation sites. Several seed companies have introduced a number of new cultivars the past few years, many of those evaluated in this study preformed equally or better than ‘Paladin’ in terms of marketable yields. However, the cultivars Lynx and SP-05–47 produced lower yields to the current standard and, therefore, are not recommended. For growers looking for large-sized fruit to meet market demand the cultivar Revolution is recommended over Paladin. Although conclusions about the cultivars PS1819, Intruder, Karisma, Stiletto, and Legionnaire could not be drawn for each trial location because they were only observed in 1 year of the study, comparing all three sites revealed that they performed well and warrant further evaluation.

Phytophthora crown, root rot, and aerial blight caused by Phytophthora capsici can be a devastating disease of peppers and the use of resistant and/or tolerant cultivars is an important ecologically based management strategy (Ristaino and Johnston, 1999). The cultivars Escalade, Paladin, Revolution, and Alliance are described as having tolerance. The southwestern site experienced phytophthora root rot in 2009; however, because the incidence was minimal, P. capsici tolerance was not evaluated.

The pepper cultivars recommended as a result of this study are believed to be suitable for commercial production under conditions common to the mid-Atlantic region. This is based on the performance of tested cultivars over a wide geographic area, two distinctive years, and different cultural practices. The ultimate value of a cultivar is determined by market. Cultivars recommended by the statewide trials can serve as a starting point, recognizing that performances can vary under site-specific conditions. 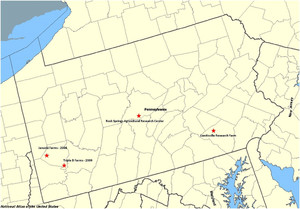