Search for other papers by Nancy L. Maxwell in
ASHS
Google Scholar
PubMedClose

Over 3000 acres of bell pepper are grown annually in New Jersey for fresh market and processing production (Rutgers University, 2005). Bell pepper production in New Jersey represents 5.5% of the total U.S. production acreage with an estimated value of $33 million [U.S. Department of Agriculture (USDA), 2011]. Each year, commercial vegetable production recommendations are distributed to vegetable growers in New Jersey and other states in the mid-Atlantic region (Pennsylvania, Delaware, Maryland, and Virginia) to use as a guideline for crop management (Orton, 2011). In recent years, the recommendation for nitrogen fertilization of bell pepper in New Jersey has been to apply 180 lb/acre, with 60 lb/acre broadcast and incorporated before bed formation followed by an additional 120 lb/acre split evenly through weekly drip irrigation during the production season (Orton, 2011). However, in some instances, bell pepper growers in southern New Jersey have increased fertilizer application rates up to 300 lb of N per mulch acre because of the very porous, sandy Atlantic coastal plain soils of southern New Jersey.

A methylene urea slow-release polymer-based fertilizer called Nitamin® (Georgia-Pacific Resins, Decatur, GA) in a granular formulation (Nitamin-43G®) or liquid formulation (Nitamin-30L®) has been developed to supply nitrogen to vegetable crops. The granular formulation consists of 43% water-soluble N with 30% of the N in the form of methylene urea polymers and 70% as urea, and the liquid formulation consists of 60% of the N as methylene urea polymers and 40% of the N as urea. The fertilizer releases nitrogen by microbial decomposition and is completely soluble in water (Reyes et al., 2008). Several case studies have been conducted to determine the effects of the fertilizer on vegetable crop yield. In a Georgia study, marketable yield of bell pepper was as good as or better than that in the standard program when the fertilizer was used in combination with quick-release N materials, or when the total N rate was split with Nitamin® applications (Kelley, 2005). In a Texas study, the fertilizer improved tomato yield at lower rates with fewer applications compared with the standard practice resulting in a gross return of $970–$4563 per acre (Dainello, 2006). Studies in Delaware determined that the fertilizer applied preplant to corn did not provide superior performance to a split application of urea ammonium nitrate solution (Alley et al., 2006). The use of the fertilizer as a slow-release source of N in a North Carolina bell pepper production study showed potential use across the state at reduced rates and had a greater impact on yield in the coarse-textured soils of the eastern coastal plain region (Reyes et al., 2008).

Phytophthora capsici is a serious pathogen of solanaceous and cucurbit crops in many vegetable production regions of the United States (Ristaino and Johnston, 1999). The crown rot phase of phytophthora blight can cause substantial economic losses on some farms in New Jersey each year. Since P. capsici can be found on most vegetable farms in the southern region of the state, many bell pepper growers in New Jersey plant phytophthora-tolerant cultivars. Some commonly grown bell pepper cultivars in New Jersey include phytophthora-tolerant cultivars, Aristotle and Paladin, as well as phytophthora-susceptible cultivars Camelot and Alliance (Rutgers University, 2005). Additionally, bell pepper fields in this region are often rotated with cucurbit crops such as summer squash (Cucurbita pepo) or cucumber (Cucumis sativus) or solanaceous crops such as eggplant (Solanum melongena) or tomato (Solanum lycopersicum), which also are susceptible to the pathogen. Because of poor crop rotations and the repeated use of the fungicide, mefenoxam, insensitive strains of P. capsici have developed on some vegetable farms in southern New Jersey (Fogg and Johnston, 2003; Parra and Ristaino, 2001). Since the early 1990s, researchers in the state have cooperated with commercial breeders and seed companies to evaluate bell pepper breeding lines and cultivars under field conditions in southern New Jersey to identify those breeding lines or cultivars which exhibit field tolerance to local isolates of P. capsici. Results of these studies have led many vegetable growers in southern New Jersey to plant phytophthora-tolerant bell pepper cultivars over the past decade.

Importantly, observations made during these research evaluations over the past decade have determined that some cultivars or breeding lines with resistance or tolerance to the crown rot phase of phytophthora blight have exhibited what is now referred to as skin separation, or “silvering,” of bell pepper fruit (Fig. 1). Although only cosmetic in nature, skin separation is a disorder that reduces aesthetic fruit quality in bell pepper. Skin separation has been generically defined as a “silvery white discoloration,” which appears as “diffused or solid silvery white areas” on fruit. Because it is considered a “defect” by USDA grading standards, skin separation could potentially be used to reduce the grade of fruit (USDA, 2005). Because resistant and/or tolerant cultivars make up as much as 30%–40% of the bell pepper acreage in southern New Jersey, many growers are at a potential risk for reduced fruit quality and grade rejection due to the presence of skin separation (Rutgers University, 2005). In some years in New Jersey, incidence of skin separation has been estimated to be as high as 66% on some harvest dates in some phytophthora-tolerant cultivars and breeding lines (Wyenandt and Kline, 2006b). Preliminary research on the possible relationship between phytophthora resistance and the development of skin separation suggests that environmental factors and cultural practices may also influence the amount of skin separation development in bell pepper fruit (Wyenandt and Kline, 2006a; Wyenandt et al., 2007). Additionally, given the increasing costs of crop production (e.g., fertilizer costs) in the United States, bell pepper growers need to know if recommended N rates and/or newly developed nitrogen additives will be cost effective and have any influence on the development of skin separation in bell pepper fruit.

The objectives of this research were to determine the effects of six nitrogen fertility programs and two commercial bell pepper cultivars with or without tolerance to the crown rot phase of phytophthora blight on marketable yield and incidence of skin separation in fruit of bell pepper.

In 2006 and 2007, experiments were established in a split-plot design with cultivar as the whole-plot factor and fertilizer regime as the subplot factor with six replications. These experiments were conducted in separate fields (Aura sandy loams) at the Rutgers Agricultural Research and Extension Center (RAREC) in Bridgeton, NJ. On 13 June 2006 and 21 May 2007, phytophthora-tolerant ‘Aristotle’ (Seminis Seeds, Oxnard, CA) and phytophthora-susceptible ‘Camelot’ (Stokes Seed, Vineland, NJ) obtained from a local seedling producer were transplanted by hand (18 inches apart in-row) into double rows (16 inches between rows) on black plastic mulch (1.25-mm thick) beds (a total of 20 plants per plot) spaced on 5-ft centers with drip irrigation. In both years, all treatment plots were 16.5-ft long with guard rows of ‘Corcel’ hot pepper (Seminis Seeds) planted in the two outside rows of the experimental plot area and at the end of each row.

All mature green pepper fruit from each treatment were harvested on 2 and 15 Aug., 6 and 18 Sept., and 5 and 23 Oct. in 2006 and on 12 and 26 July, 13 and 29 Aug., 12 Sept., and 2 and 31 Oct. in 2007. At each harvest, all fruit were graded and sorted by weight where extra large fruit were ≥ 0.50 lb, large fruit were 0.33–0.49 lb, medium fruit were 0.25–0.32 lb, and fruit ≤ 0.24 lb were culled out. Weights of extra large, large, and medium fruit were combined to determine marketable yield in pounds per plot and total marketable yield (pounds per acre). Additionally at each harvest, all fruit were evaluated for the presence of skin separation, or “silvering,” by visually examining each fruit (Fig. 1). Fruit with any visible appearance of skin separation was scored as positive, regardless of its severity (i.e., the total percentage of fruit surface with “silvering” present on the surface). The percentage of marketable fruit with skin separation was determined by dividing the total number of marketable fruit (i.e., extra large, large, and medium) with skin separation by the total number of marketable fruit with and without skin separation. For this study, fruit with skin separation were still considered marketable and included in total marketable yield. In 2006, because of the death of a few plants in some treatment plots, marketable yield (pounds per plot) were corrected to approximate yield from 20 total plants per plot. Total rainfall at RAREC for the months of June, July, August, and September was 7.39, 5.7, 2.46, and 3.88 inches, respectively, in 2006 and was 2.34, 2.02, 3.13, and 0.53 inches, respectively, in 2007.

To test for main effects and interactions of cultivar, fertilization regime, and harvest date, a mixed-effects repeated measures analysis of variance (ANOVA) was fit to the data using the MIXED procedure of SAS (version 9.1; SAS Institute, Cary, NC). For marketable yield per year, there were no repeated measurements so a mixed-effects ANOVA for a split plot was used, otherwise the analyses were alike. The comparison of fertilization main effect means was performed using Tukey's honestly significant difference test. Significant interaction effects were further analyzed using the SLICE option of the MIXED procedure to perform tests of simple main effects within each date of harvest. Departure from the distributional assumptions for the model was assessed using Q–Q plots and plots of standardized residuals.

In both years, there were no significant differences in marketable yield or in the percentage of marketable fruit among the fertility programs, suggesting that there was no added benefit in increased marketable yield at the higher fertility rates applied in granular form before transplanting or in weekly applications during the production season (Table 1). Marketable yield in Nitamin® treatments applied either in granular or liquid form were comparable to the standard fertilizer treatment at the low or high N rate (Table 1). In 2006, total marketable yield per acre among fertility programs ranged from ≈27,000 to 32,000 lb. In 2007, marketable yields ranged from ≈79,000 to 85,000 lb/acre and were nearly two and a half times that in 2006. The large variability in marketable yield between years is likely due to the ≈3-week difference in planting date. In 2007, transplants were set on 21 May compared with 13 June in 2006. The lower yields in 2006 were consistent with yields of late bell pepper plantings in commercial fields in southern New Jersey. 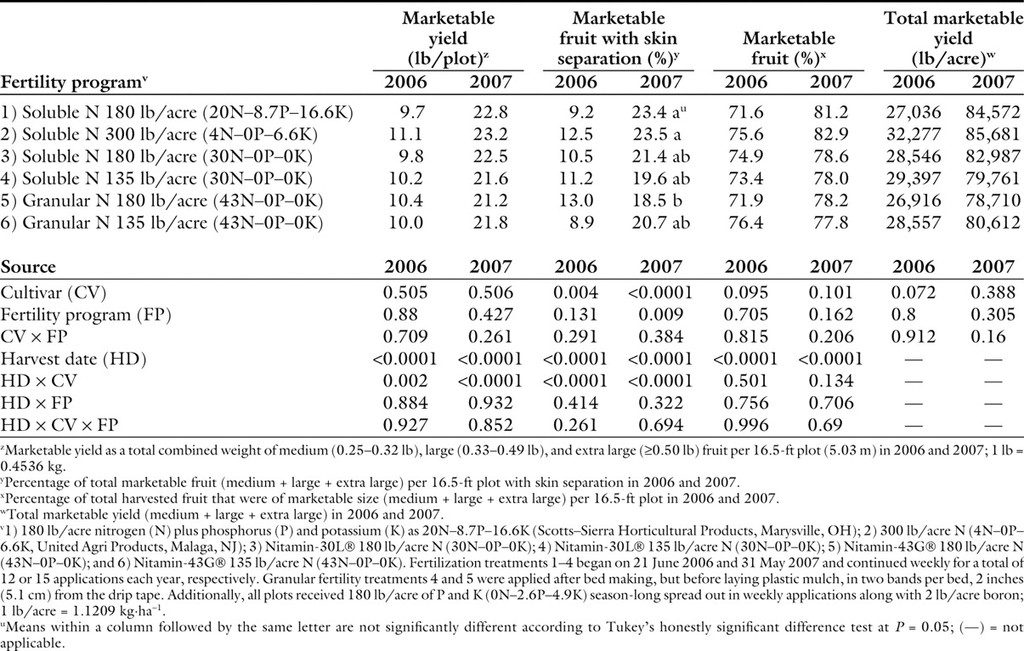 In both years, there was a significant harvest date × cultivar interaction for marketable yield. The interaction was not consistent between years (Figs. 2 and 3). In 2006, ‘Camelot’ yielded more than ‘Aristotle’ in midseason (P = 0.0021) but less at the end of the season (P = 0.0299) (Fig. 2). In 2006, when transplants were set at a later date, higher midseason yields occurred with ‘Camelot’ after which ‘Aristotle’ yields were similar to, then finally surpassed those of ‘Camelot’ (Fig. 2). In contrast, in 2007, ‘Camelot’ yielded less than ‘Aristotle’ at the first harvest (P < 0.001) and more at the last harvest (P < 0.001) (Fig. 3). The yield profile in 2007 indicates that although total marketable yields were similar for the two cultivars during much of the production season, yield for ‘Camelot’ was higher than ‘Aristotle’ at the last harvest date (Fig. 3).

Effect of fertility program on percentage of harvested fruit with skin separation.

Effect of cultivar on the development of skin separation in bell pepper fruit.

Skin separation or “silvering” on fruit of mature bell pepper. 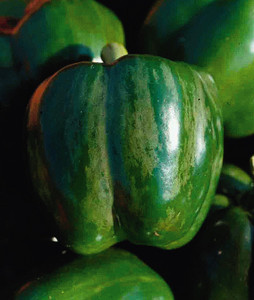 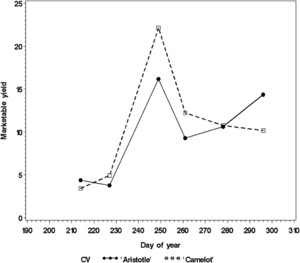 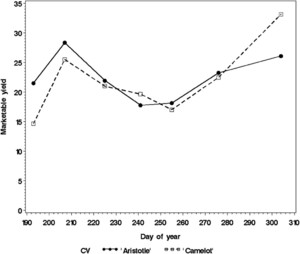 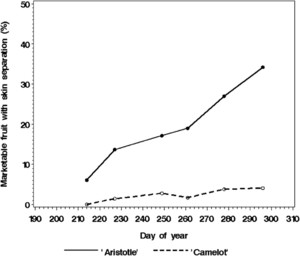 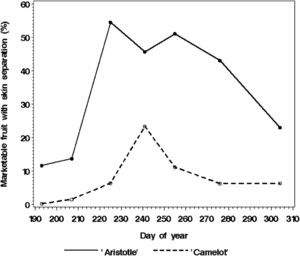