Greenhouse and Landscape Performance of Bedding Plants in Biocontainers

Bedding plants are one of the primary products of the floriculture industry. In the United States, the wholesale value for bedding and garden plants in 2007 was ≈$6.5 billion, which was 58% of total gross sales for floriculture crops [U.S. Department of Agriculture (USDA), 2009]. These crops are commonly grown in plastic containers, which present a significant disposal issue for consumers and the horticulture industry (Hall et al., 2009). Producers of bedding plants may encounter disposal issues of these plastic containers, particularly if plant materials are not sold during a season, and consumers and landscapers must also dispose of plastic containers once the plants are removed (Evans and Karcher, 2004). An estimated 1.7 billion pounds of plastic were used in agriculture in 2002 (Levitan and Barros, 2003).

There are numerous types of alternative, biodegradable containers that can be composted or planted directly into the soil, which eliminate the need for plastic containers (Rodda, 2008). The most common non-plastic biodegradable container has been the peat container. Although referred to as “peat” containers, they are typically made from a combination of peat and waste wood pulp or paper. Peat containers were reported to have advantages over plastic containers by reducing transplant shock and transplanting time, air pruning roots, quicker establishment of finished plants, and their ability to biodegrade (Khan et al., 2000). However, peat containers may have significant disadvantages compared with plastic containers; they are more expensive, they have been shown to have lower dry and wet strength than the plastic containers, and algae can grow on their outer walls (Evans et al., 2010; Evans and Karcher, 2004). Additionally, plants grown in peat containers required more water than plants grown in plastic containers (Evans and Karcher, 2004). When transplanting Jiffy® peat pots (Jiffy Products of America, Batavia, IL), it is recommended to remove or bury the rim of the peat pots so that the rim does not act as a wick to dry out the substrate (Grower's Solution, 2010; Relf, 2009). This will also prevent the peat pot from degrading quickly and reduce root growth into the soil.

Recently, many types of biodegradable containers that are “plantable” (containers that can be used for greenhouse production and then planted directly in the landscape) have become available for the production of bedding plants. These include Fertilpots (Fertil International, Boulogne Billancourt, France) or DOT pots (Bethel Organics, Arcadia, FL) that contain no glue or binders and are composed of 80% spruce fibers and 20% peat; coir fiber or coco fiber containers (ITML Horticultural Products, Brantford, ON, Canada), which are manufactured by using high pressure to bond coco peat and latex from rubber trees; CowPots (CowPots Co., Brodheadsville, PA) that are manufactured from composted cow manure; and Strawpots (Ivey Acres, Baiting Hollow, NY), which are made from 80% compressed rice straw, 20% coco fiber, and a binder (Fig. 1).

Compostable containers are another type of biodegradable container and are not designed to be planted directly into the ground. Once they have been used for greenhouse production, they can be discarded into a compost or landfill facility where they will decompose. These containers include rice hull containers (Summit Plastic Co., Tallmadge, OH), which are made from ground rice hulls and a binder to form a solid container; OP47 containers (Summit Plastic Co.) that are bioplastics made up of 100% renewable starch-based product; and paper containers (Western Pulp Products, Corvallis, OR) that are composed of pressed wood pulp and a minimum of 74% recycled paper, with at least 37% post-consumer recycled (on dry weight basis) (Fig. 1).

‘Score Red’ geranium, ‘Grape Cooler’ vinca, or ‘Dazzler Lilac Splash’ impatiens were seeded in 288 plug trays with a volume of 5 mL per plug cell. Three-week-old plugs were transplanted into the test containers filled with 400 or 700 mL LC1 mix (Sun Gro, Bellevue, WA) and placed in glass-glazed greenhouses. All three species were planted on 2 Apr. 2009 at LSU. Geranium germination rate was low at LSU, and so rice straw and 5-inch plastic containers were not evaluated for this crop. Impatiens were planted on 2 Apr. 2009, vinca were planted on 6 Apr. 2009, and geranium were planted on 14 Apr. 2009 at LWG. Impatiens were planted on 16 Feb. 2009 and the geranium were planted on 16 Feb. 2009 at UA. The minimum temperature set point for greenhouse air temperature at all locations was 20 °C with a daytime high temperature of 28 °C during the experiment. Plants were fertilized at each irrigation with 200 mg·L−1 N using a 15N–2.2P–12.5K fertilizer (Excel 15–5–15 Cal–Mag®; Scotts, Marysville, OH). On the day of planting, the substrate was drenched with 50 mL of 15% etridiazole and 25% thiophanate-methyl (Banrot®, Scotts) fungicide per container according to label directions. Plants were irrigated when ≈25% of the substrate surface was visually determined to be dry.

Bedding plants produced in the greenhouse study at LWG were planted in raised landscape beds to test field performance. Impatiens, vinca, and geraniums were planted on 14 May, 28 May, and 10 June 2009, respectively. The soil was sandy loam with a pH 6.7. Impatiens were overgrown and pinched back before planting to an average height of 11 cm and width of 13.5 cm. Impatiens were equally spaced in a planting area of 4.5 × 2.0 m. Plants were in full sun until ≈1430 hr when shade from surrounding trees reduced light levels by 50% to 75%. Vinca and geraniums were not pinched, grown in full sun, and equally spaced in a planting area of 3 × 1.9 and 4 × 1.9 m, respectively. Treatments were arranged in a completely randomized design with six container types (CowPot, coconut fiber, rice straw, peat, Fertil, and 4-inch plastic), with four replications and four plants per rep, for a total of 96 plants of each species. All containers were left intact when planting except for plastic containers, which were removed before planting. Plants were hand watered immediately after planting and as needed through the growing period. Plants were harvested 8 weeks after transplanting into the field. Data recorded were width (measured two times; one width perpendicular to the other), height, and shoot dry weight. 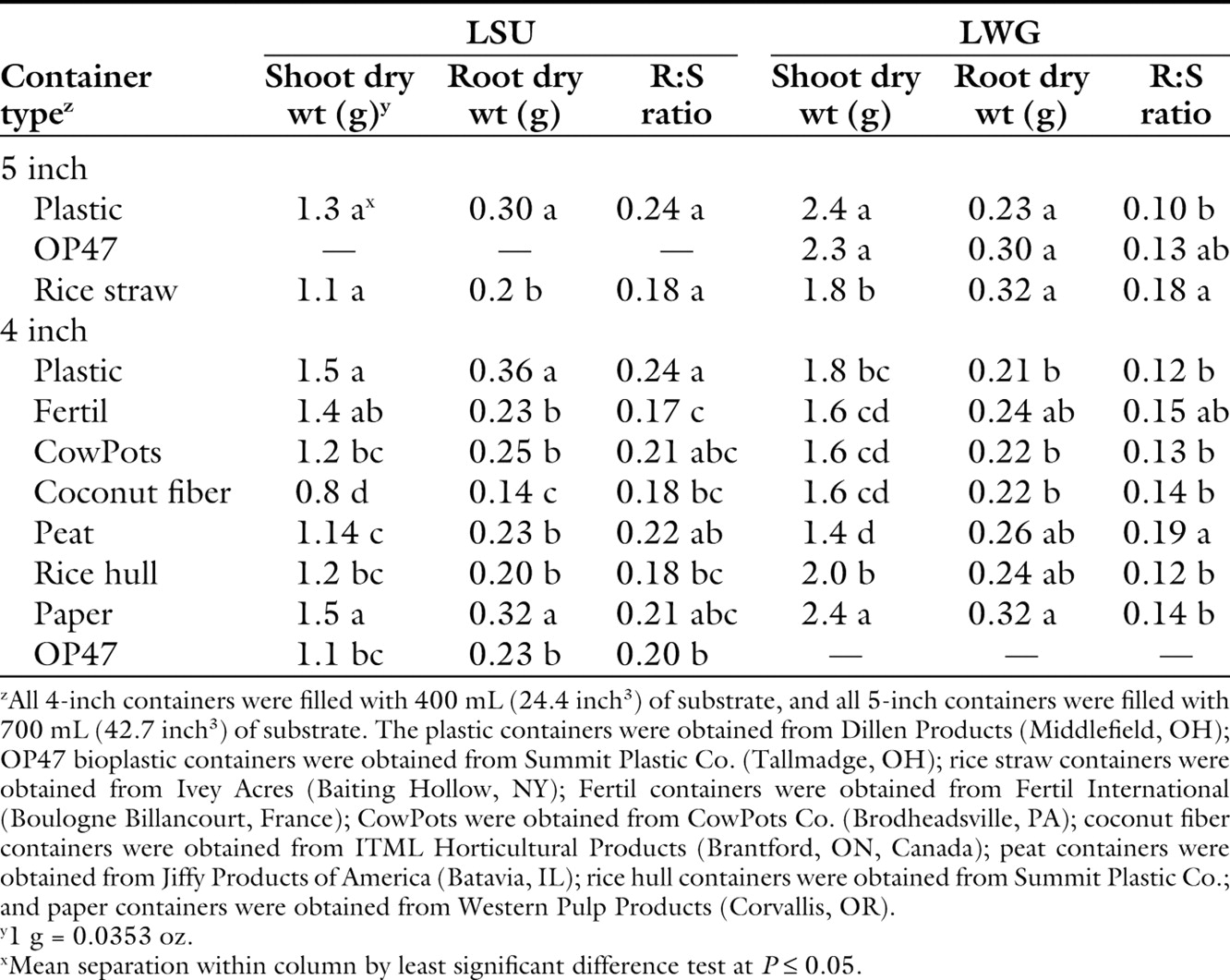 At LWG, there were no significant differences in shoot dry weights of geranium or vinca for all containers tested (Table 4). However, impatiens had higher shoot dry weights when planted and grown in Fertil containers than when grown in CowPots and coconut fiber containers. Plants in the 4-inch plastic, Fertil and CowPots containers produced taller geraniums than those in coconut fiber when planted in the landscape. Plant heights in impatiens were similar to those in geraniums, in that those plants grown in 4-inch plastic and Fertil containers were the tallest and impatiens in the coconut fiber containers were the shortest. There was no difference in vinca plant height regardless of container type in the LWG landscape. Container type did not have an effect on the plant width for geraniums, impatiens, or vinca.

Root dry weights of all three plant species were either mixed (geranium and vinca) or similar (impatiens) when grown in 5-inch containers at all locations. There was no difference in root growth of geranium or impatiens when all container sizes and types were considered. However, vinca had higher root growth in paper containers and the lowest root growth in peat and coconut fiber containers. These results were similar to the shoot growth response of vinca. Ueno et al. (2002b) found that a root ball was observed in all plastic containers when growing pumpkin (Cucurbita moschata); however, there was rarely any root ball found in paper containers. They also found that there was about a 60% lower root dry weight in paper vs. plastic containers.

On the basis of the results from landscape at LWG, it is unclear if any one of the direct plant containers tested had a significant impact on the field growth of the three crops tested. Results do indicate that once planted in the field, plants grown in direct plant containers will generally perform just as well as the plants grown in traditional plastic containers, which would be removed before planting. These results suggest the direct plant containers do not inhibit root growth of bedding plants. Sakurai et al. (2005b) found that tomato seedlings grown in biodegradable containers made of maize and palm developed shorter shoots and fewer leaves than those plants grown in plastic containers at 11 d after transplanting. However, in the period after 11 d after transplanting, the plants in biodegradable pots given heavy fertilizer applications grew similarly to plants given standard fertilization. They suggested that the low growth rate of the plants in biodegradable pots within the initial 11 d after transplanting was caused by the restricted root zone of the plants. However, Hellemans (1997a) found that when tree seedlings grown in biocontainers were potted into 3-L plastic pots, growth and rooting of all test plants from all container types was similar.

The growth of geranium, impatiens, and vinca in this study varied by container type and location. Those plants grown in 5-inch plastic control or paper containers generally performed better than those grown in other containers. However, plant growth in all the containers used in the greenhouse portion of this study produced marketable plants for both the retail and landscape markets. Cultural practices and the growing environment should be closely monitored during greenhouse production when using biocontainers as differences in plant growth can occur, which may be attributed to differences in physical properties (Evans et al., 2010). This study indicated that direct plant biodegradable containers provide landscapers with suitable alternatives to plastic or compostable containers. Thus, greenhouse managers and landscapers looking for alternatives to plastic containers have a significant number of biocontainers that can be used successfully for greenhouse production and landscape planting based upon production practices and landscape requirements. 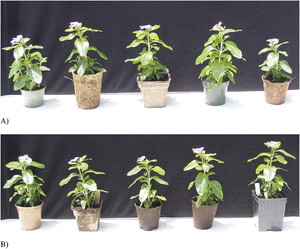