Search for other papers by David J. Aurentz in
ASHS
Google Scholar
PubMedClose

Production of the edible mushroom in the United States totaled 802 million pounds during the 2007–08 growing season, with 521 million pounds or 65% produced in Pennsylvania (Norris, 2009). The major ingredients in mushroom-growing substrate from farms in Pennsylvania are typically recycled agricultural waste products and other materials, which include hay, straw and horse bedding, poultry litter, corn cobs, corn stover, cottonseed meal, cocoa hulls, and gypsum in various amounts and proportions (Chang and Miles, 1989; Stamets, 2000). The ingredients are mixed, blended, and irrigated thoroughly, placed inside a production facility, and pasteurized with steam heat to sterilize the substrate before inoculation with mushroom spawn (Wuest, 1982). Sphagnum peatmoss is added later in the growing process (Beyer, 2003; Chang and Hayes, 1978).

The laboratory tests determined compost characteristics on a wet weight, wet volume, and dry weight basis. Bulk density was determined “as is” (i.e., as received at the laboratory, and not oven-dried) on a wet volume basis [test method TMECC 3.01-A, U.S. Composting Council (Westerman, 1990)] and particle size also was determined “as is” on a wet weight basis. Data from all samples were compiled to determine mean, standard deviation, and the minimum and maximum values (Steel and Torrie, 1980) for each parameter (Statistix, version 9; Analytical Software, Tallahassee, FL). Also, wet volume laboratory results data were used to calculate the amount of plant nutrients in fresh mushroom compost per acre, as well as the sodium adsorption ratio (SAR) per acre (Swift, 2009). The SAR, calculated as follows,

Fresh mushroom compost had an average pH of 6.6 (Table 1) within the optimum soil pH range of 6.0 to 7.0 for growing most agricultural and horticultural crops (Acquaah, 2009; Foth, 1984). Lohr et al. (1984b) reported an average leachate pH of 8.0 for fresh mushroom compost. Only three samples were used in that study from a single mushroom farm in Tennessee (Lohr et al., 1984b) compared with 30 samples from multiple farms in this investigation, and the amount and quality of materials used to make mushroom substrate is dramatically different in Pennsylvania (Beyer, 2003; Wuest, 1982; Wuest et al., 1995). The C:N ratio of fresh mushroom compost in this study averaged 13:1 (Table 1), within the desired range of 10:1 to 15:1 for ideal compost (Stoffella and Kahn, 2001).

Analysis of fresh mushroom compost on a wet weight basis. 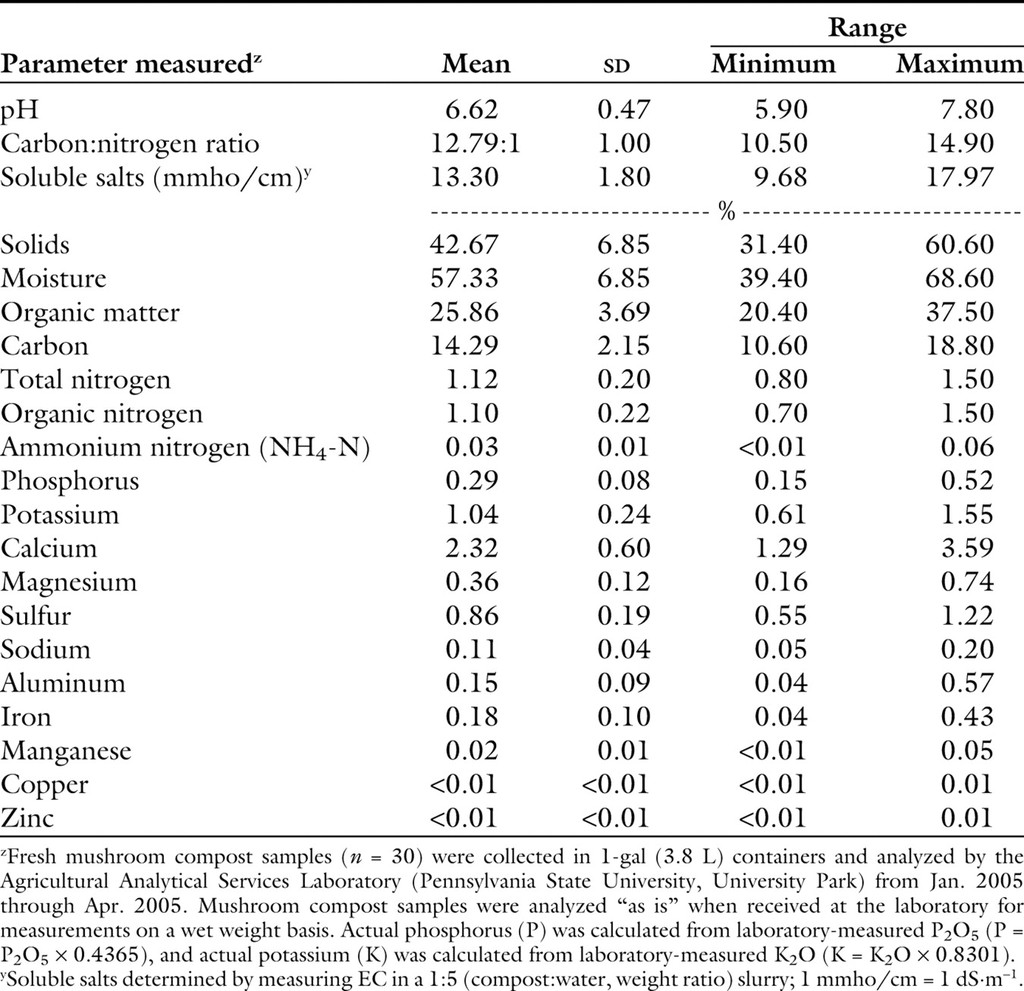 The average EC of fresh mushroom compost was 13.30 mmho/cm (Table 1), which is not considered high enough to damage turfgrass (Landschoot and McNitt, 2005) or impede plant production (Wang et al., 1984). In addition, salt concentrations can be significantly diluted when a compost is incorporated or tilled into a soil or soil amendment (Stoffella and Kahn, 2001). Lohr et al. (1984b) reported an EC of 22 mmho/cm for fresh mushroom compost, and concluded that K, Ca, and Mg concentrations accounted for 80% to 90% of total dissolved salts present in saturated paste extracts used to measure EC in that study. However, it is difficult to compare soluble salt concentration in compost from previous research when different analytical methods are used (Carter, 1993). Although soluble salt concentration of compost is often a concern to practitioners (Tyler, 1996), this material has been used successfully in many plant production systems (Chong and Rinker, 1994; Chong et al., 1991a; Philippoussis et al., 2004; Romaine and Holcomb, 2001; Wang et al., 1984; Wuest et al., 1995).

Analysis of fresh mushroom compost on a wet volume basis. 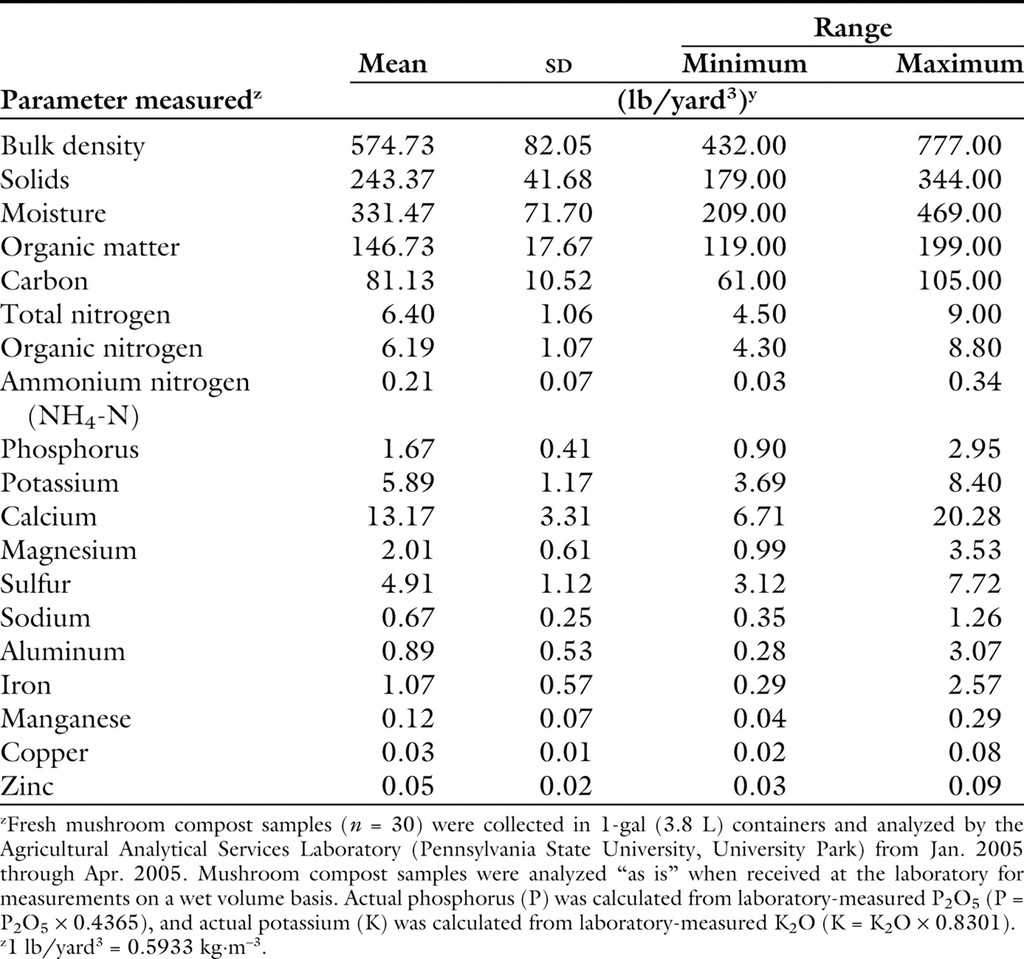 Analysis of fresh mushroom compost on a dry weight basis. 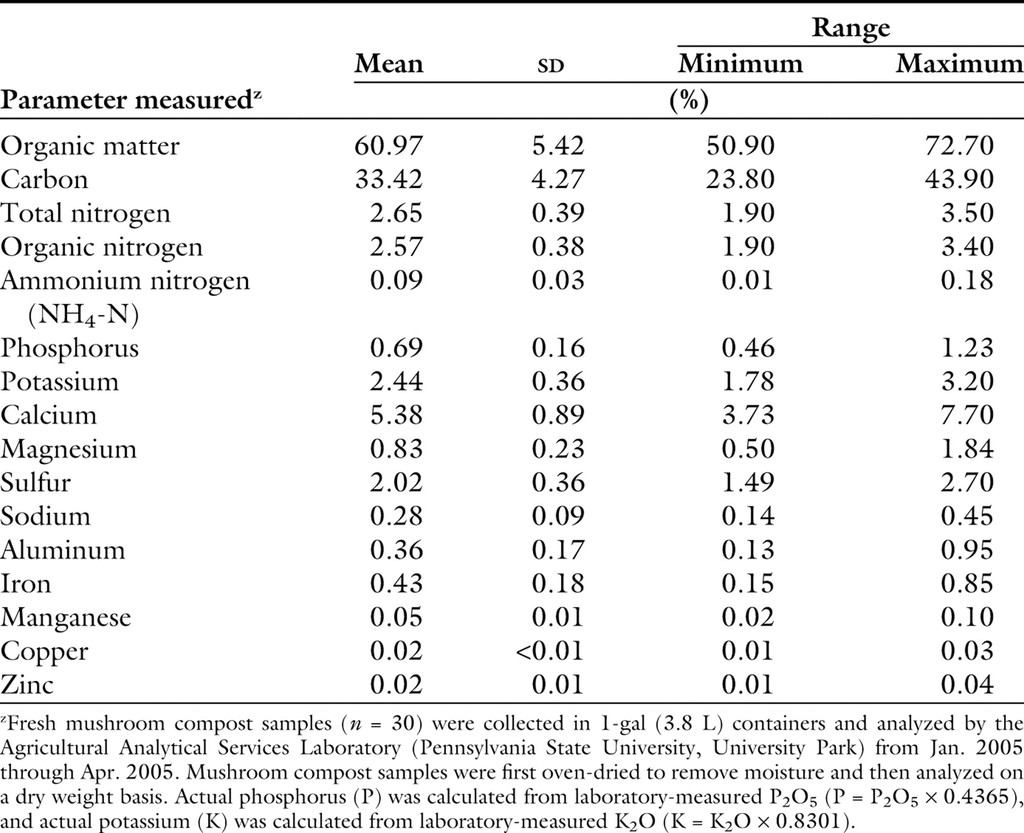 Amount of N and P per acre.

The amount of plant nutrients supplied on a per acre basis is useful in field or horticultural crop production to determine nutrients provided by compost and those needed from additional fertilizer inputs (Brady and Weil, 1996). To uniformly apply 1-inch-thick fresh mushroom compost to 1 acre of land would require ≈40 tons/acre or 139 yard3/acre of fresh mushroom compost as calculated from an average bulk density of 575 lb/yard3 (Table 4). A 1-inch-thick layer of mushroom compost is typically applied to agricultural fields in Pennsylvania (Wuest et al., 1995). Forty tons of material would supply 891 lb total N, of which 29 lb is in the form of ammonium N and 862 lb is in the form of organic N (Table 4). With the recent increase in synthetic fertilizer costs (Torres, 2008), N supplied from fresh mushroom compost could help meet plant nutrient needs while reducing expenses by needing less fertilizer inputs (Stewart et al., 1998). Also, 40 tons/acre of fresh mushroom compost results in 232 lb of P being applied (Table 4). Information on P on a per-acre basis is useful for developing and maintaining soil nutrient management plans and practices (Jones, 2003).

Although SAR is typically based on concentration of ions in solution (Carter, 1993), a calculated (Swift, 2009) estimate from 40 tons fresh mushroom compost applied to 1 acre results in SAR = 0.38. A SAR ≥15 would typically indicate excess Na accumulation compared with Ca and Mg, and that sodium would be adsorbed by soil clay particles, thus causing problems with soil aggregation and drainage, as well as inhibiting water absorption by plant roots (Brady and Weil, 1996).

On average, 91% of fresh mushroom compost particles measured ≤3/8 inch in diameter, with ≈8% at 3/8 to 5/8 inch, and <1% at 5/8 to 1 inch (Table 5). No particles were measured >1 inch in diameter. Overall, this material is of a consistent and uniform size and is easy to handle, apply, and distribute to lawns, landscapes, sports fields, and agricultural fields, and is amendable for most horticultural uses (Landschoot and McNitt, 1994; Stoffella and Kahn, 2001).

In Pennsylvania, the state legislature has recently reclassified fresh mushroom compost from an agricultural waste product to now listing it as a fertilizer and soil amendment (American Mushroom Institute, unpublished data). While stockpiled outdoor or passively aged mushroom compost has been used for many agricultural and horticultural purposes, the accumulation of weed seeds deposited into that material by nature has provided challenges to the end user, as well as the cost and maintenance of storing that material by the mushroom industry (Rinker, 2002). In conclusion, fresh mushroom compost should be considered a viable, recycled agricultural product useful as a soil amendment or natural organic fertilizer, and could potentially be surface-applied or incorporated into soil or plant growth media. The methods used to grow white button mushrooms are very similar among the farms in southeastern Pennsylvania (Beyer, 2003; Wuest, 1982). Therefore, results of the analysis of fresh mushroom compost in this report should be representative of the chemical and physical properties throughout that material as produced in Pennsylvania.