Strawberry is an important and popular fruit throughout the world. In northern regions of Europe and North America, cold weather is a critical limiting factor for strawberry production (Boyce and Heleba, 1994; Linden et al., 2002; Nestby and Bjorgum 1999; Turner et al., 1993; Warmund and Ki, 1992). Winter mulch is usually applied and researchers have evaluated the effectiveness of different mulching materials on strawberry winter survival (Boyce and Heleba, 1994; Nestby et al., 2000). However, cold hardiness is a characteristic that is not as easily tested as productivity; therefore, some released cultivars have unknown cold hardiness, posing a risk for cold-climate growers. Different kinds of artificial freezing test methods have been used to predict strawberry cold hardiness (Linden et al., 2002; Warmund and Ki, 1992). In vitro strawberry plant cold hardiness did not correlate well with field hardiness (Palonen and Buszard, 1997; Rugienius and Stanys, 1997). Also, runners from elite virus-free plants and those from commercial fields did not show consistent differences in cold hardiness, either in controlled freezing tests or field evaluations (Palonen and Linden, 2001). Field survival under conditions that cause differential injury among cultivars is the ultimate test of strawberry winter hardiness (Linden et al., 2002). The University of Minnesota North Central Research and Outreach Center at Grand Rapids, MN, is located in U.S. Department of Agriculture (USDA) plant hardiness zone 3b (Cathy, 1990), which makes it an ideal location for the cold hardiness evaluation of horticultural crops (Anderson et al., 2008; Luby et al., 2001, 2003). The objective of our research was to test the relative cold hardiness and performance of 15 strawberry cultivars in the field after Winter 2005–2006 and a test Winter 2006–2007, which had no snow cover until late Feb. 2007.

This experiment was part of our hardy strawberry breeding/evaluation program at the University of Minnesota North Central Research and Outreach Center at Grand Rapids (lat. 47°14′33.39″ N, long. 93°29′30.97″ W, USDA plant hardiness zone 3b). Fifteen cultivars were included in a randomized complete block design with three replications (Luby et al., 2001, 2003). Bare-root plants were used for all cultivars in this experiment from a single U.S. nursery except ‘AC Wendy’, which was supplied by a Canadian nursery under the experimental number ‘KRS-02’. Each plot consisted of two subplots of six plants initially established in 2005 at 18 inches within rows and 4 ft between rows and allowed to form matted rows. Subplots were separated in the row by 4 ft. One subplot in each plot was mulched for the winter and the other remained unmulched. Approximately 4 inches of wheat straw was applied on top of mulched plants in mid-November and removed and placed between rows in late April, depending on weather conditions. At the time of mulch removal in the spring, mulch was placed around plants in unmulched plots so that all plants benefited from mulch during the growing season. Fruit was harvested in 2006 and 2007. Total yield was recorded in each subplot, and the mean berry weight at each harvest was estimated using a sample of 25 berries. Each year, plant stand (percent leaf coverage for the designated area for each plot) was visually estimated in the fall before mulching and in the summer during picking season (Luby et al., 2001, 2003). Plants were renovated through flame-burning of old leaves and narrowing down the plots by tilling after harvest in July 2006 (Wildung, 2000). Because this trial is part of our strawberry breeding selection/cultivar evaluation project, no destructive data were taken with these plants. Pesticide was used to control tarnished plant bugs (Lygus lineolaris) each year. No other pesticide or fungicide was used in this experiment. Overhead irrigation was supplied as necessary during the growing seasons but was not used to provide frost protection. Air and soil temperatures were recorded throughout the Winter 2005–2006 and Winter 2006–2007 with four-channel data loggers (HOBO; Onset Computer, Bourne, MA) with two replicates in each of the mulched and unmulched treatments for air, ground, and 5- and 10-cm soil temperatures.

Analyses of variance for plant stand, yield, and berry size were conducted separately for each of the 2 years of the trial for mulched and unmulched treatments with Statistix software (Analytical Software, Tallahassee, FL).

Soil temperatures were much colder in 2007 than in 2006 (Fig. 1A–B). During Jan. and Feb. 2007, daily minimum soil temperatures, on average, were 5.4 °F lower in unmulched than in mulched plots. On 16 Jan. 2007, the soil temperature at 5-cm soil depth reached 6.6 °F in unmulched plot and 20.6 °F in the mulched plot (Fig. 1B). The daily minimum soil temperatures in Feb. 2007 stayed below 18 °F at 5-cm soil depths for 16 and 24 d (consecutive) for mulched and unmulched treatments, respectively, which probably led to the severe winter damage observed in the Spring and Summer 2007 (Fig. 2; Table 1). There was almost no snow coverage until late Feb. 2007, so during the cold periods of January and early February, plants had no insulation afforded by snow. During the same period in 2006, the average snow coverage was 8 to 12 inches. The 5- and 10-cm soil temperatures remained constant at ≈30 to 31.5 °F with 28 °F being the lowest temperature recorded on both mulched and unmulched treatments during Winter 2005–2006 (Fig. 1A). During sunny days from 9 Mar. to 13 Mar. 2007, the highest air temperatures were between 50 and 60 °F, but the temperatures on the ground surface and at 5- and 10-cm depths in the soil were ≈30 to 31 °F. At Grand Rapids, MN (USDA plant hardiness zone 3b), temperature fluctuation may play a role in strawberry winter injury. However, more importantly, the depth and duration of cold temperatures in midwinter were critical factors affecting strawberry winter survival, especially during an open winter without snow cover. 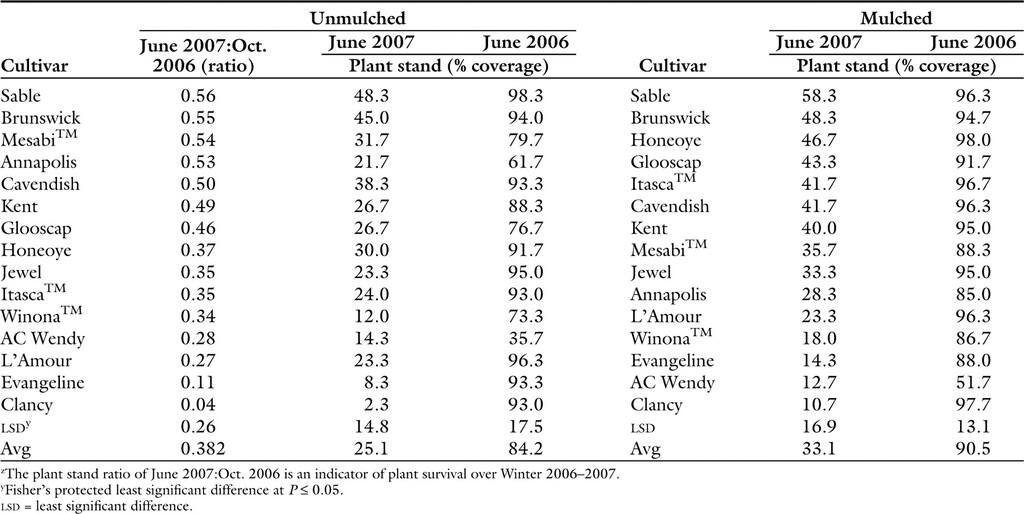 Linden et al. (2002) reported that freezing tests at –6 °C (21.2 °F) for 26 d could distinguish some selections as less hardy than others, but no strawberry crown could survive –8 °C (17.6 °F) even for 1 d. Boyce and Heleba (1994) reported –5 °C (23.0 °F) crown temperature as the crown injury threshold. Palonen and Linden (2001) stated that strawberry crowns could survive –8 °C without injury but suffered severe injury when exposed to –12 °C (–10.4 °F) for 1 h. We could not determine the temperature threshold in this experiment; however, minimum temperatures below 18 °F at 5-cm soil depth for more than half a month were definitely lethal to all strawberry cultivars. The daily minimum ground temperature (an estimate of crown temperature) was below 23 °F from 10 Jan. to 24 Feb. 2007 for both mulched plots and unmulched plots.

On average, yields were reduced in 2007 compared with 2006 by 56% and 38% in mulched plots and unmulched plots, respectively (Table 2). ‘Brunswick’, ‘Mesabi™’, ‘Kent’, and ‘Cavendish’ were the four highest-yielding cultivars for both 2006 and 2007 in the mulched plots (Table 2). In the unmulched plots, ‘Brunswick’, ‘Mesabi™’, and ‘Cavendish’ were the top three high-yielding cultivars after Winter 2006–2007. ‘Evangeline’, ‘Clancy’, and ‘AC Wendy’ were always among the bottom cultivars for crop yield (Table 2) and were significantly lower in yield than the top four performing cultivars, Brunswick, Mesabi™, Kent, and Cavendish, in all treatments and for all seasons. The low yields of ‘AC Wendy’ and ‘Winona™’ could be partially the result of the poor establishment in 2005; however, the June 2006 stand ratings for ‘Evangeline’ and ‘Clancy’ were among the highest of all 15 cultivars. ‘Clancy’ performed well in mulched plots after the mild winter but showed extensive mortality in the unmulched plots after the severe test of Winter 2006–2007.

Strawberry yield in 2006 and 2007 for both mulched and unmulched treatments at Grand Rapids, MN (USDA plant hardiness zone 3b).z 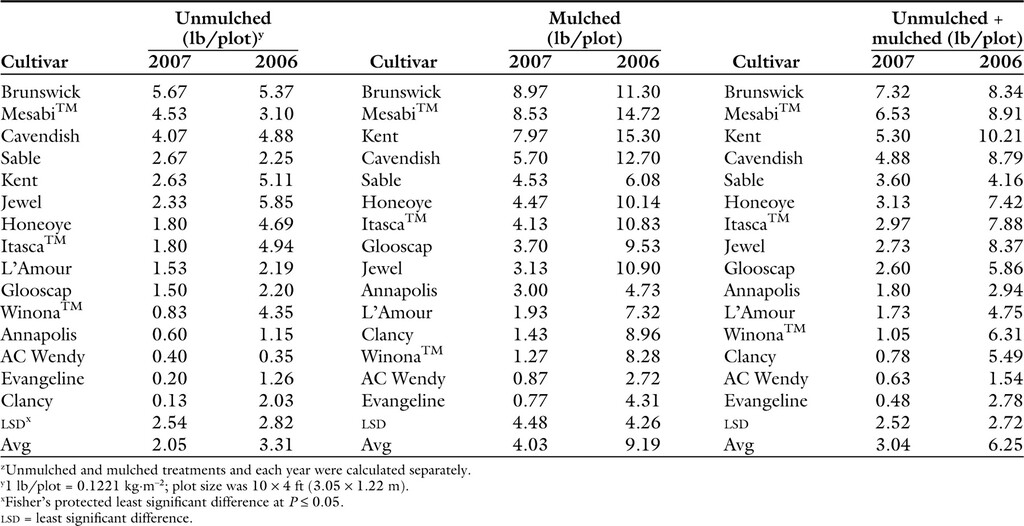 The average berry weight was 13.4 and 10.9 g in 2006 and 9.9 and 7.1 g in 2007 in mulched and unmulched plots, respectively (Table 3). Fruit size is determined in part by genetic factors, but also varies with environmental conditions such as midwinter stress, frost injury, precipitation, and pest damage. In 2006, the late frost damaged the primary berries mainly in the unmulched plots. This decreased the average berry size compared with the mulched plots, especially for those early cultivars. In 2007, the small berry size for all cultivars was mainly the result of the midwinter damage. 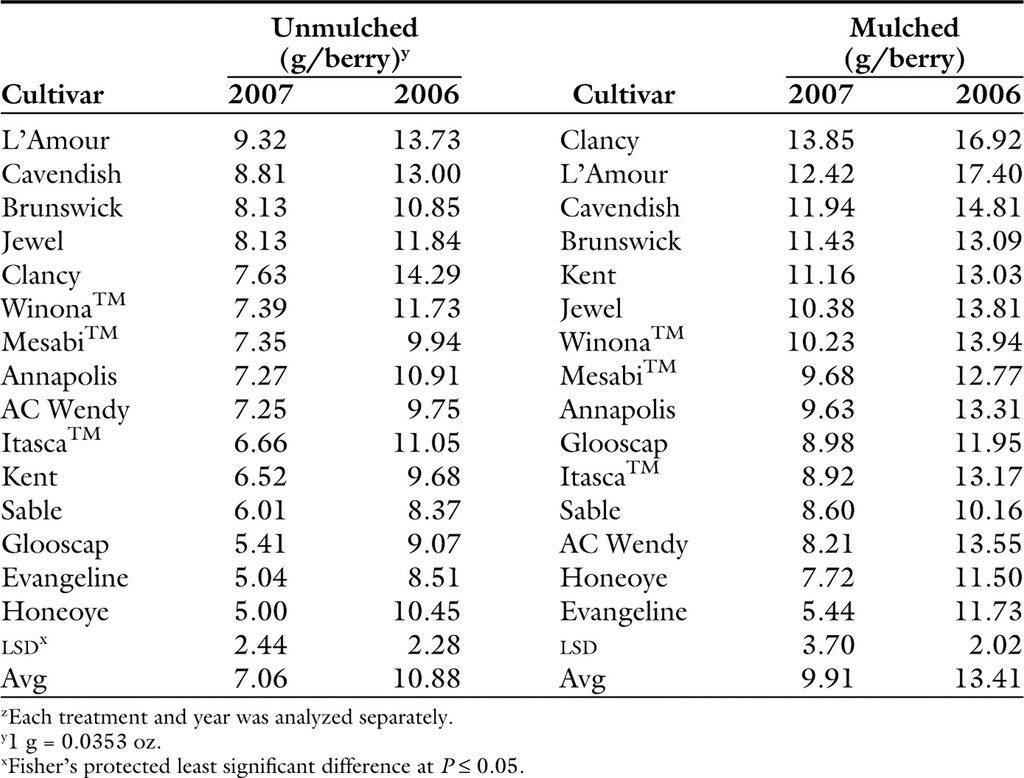 Based on this report, ‘Brunswick’, ‘Cavendish’, ‘Kent’, ‘Mesabi™’, and ‘Sable’ were the top five performing cultivars among the 15 tested. On the other hand, ‘Clancy’, ‘Evangeline’, ‘AC Wendy’, and ‘L'Amour’ were the most cold-sensitive cultivars. The performance of ‘AC Wendy’ may also reflect the quality of planting stock, which did not appear as vigorous or develop as dense a stand as the other cultivars during the 2005 establishment year. Yield and survival rates from this trial confirm the growers’ adoption of ‘Kent’, ‘Cavendish’, and ‘Mesabi™’ over the other cultivars for climates and sites with the potential for open cold winters.

Although we did not determine the temperature threshold for injury, this study provides useful information for strawberry growers or breeders in cold areas regarding the relative cold hardiness of the cultivars and the limitations of the mitigating effects of snow and straw mulch. A minimum snow cover of 6 to 8 inches would make the strawberry plants safe for most winters; however, snow cover is not reliable from year to year. In a severe winter like 2006–2007 with no snow cover, 4 inches of straw mulch provided the strawberry plants some protection, but not enough to avoid substantial injury when soil temperatures reached below 18 °F for an extended period of time. 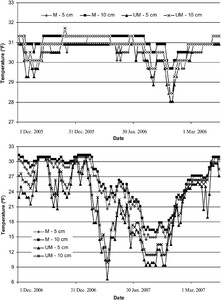 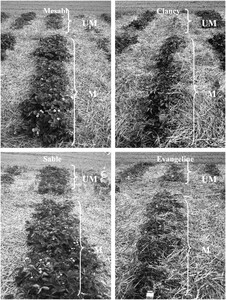